Ginny & Georgia fans, has “Marriage Is a Dungeon” been stuck in your head, too, since Season 2’s release earlier this month? Well, you have a surprising source to thank for the catchy earworm.

In the Netflix dramedy’s sophomore season, Ginny’s high school puts on a Bridgerton-meets-Into the Woods musical production titled Wellington. Ginny’s friend Bracia (played by Tameka Griffiths) snags the lead role, while her BFF Maxine (Sara Waisglass) is disappointed to be relegated to role of the ugly witch. But it all works out for the best, with the two teens stealing the show during their duet of “Marriage Is a Dungeon,” in which Maxine’s witchy Lady Blair warns Bracia’s Josephine that “love is just a weapon” and “beauty is an illusion.”

In TVLine’s exclusive video, Ginny & Georgia composers and songwriters Ben Bromfield and Lili Haydn take viewers behind the scenes of the Regency-era musical and reveal the unusual final words that inspired their original, Broadway-worthy song.

When tasked by the show’s exec producers with creating a villain tune, “I was a little confused as to where…an evil witch, as they kept calling her, would fit into this Jane Austen aesthetic,” Haydn shares, “and then I remembered what my grandmother’s evil older sister’s last words to me were. She leaned in with her shaky finger and she said, ‘Marriage is a dungeon! You think you know. You don’t know. I know.’” 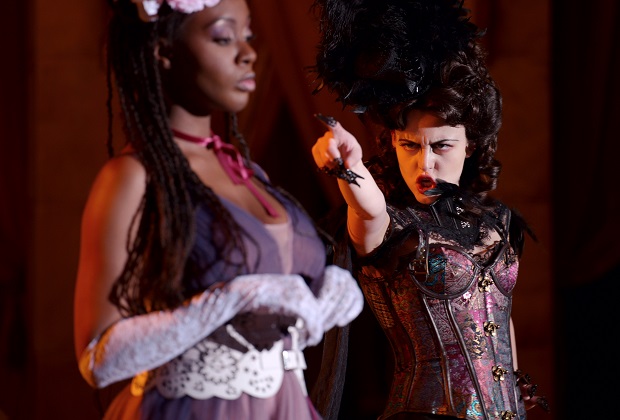 And thus, the duet was born, with Haydn putting in “all of the negative thinking and insults that I had worked so hard in therapy not to be plagued by,” she says, adding that Waisglass is “a fantastic singer and comedic actress, and she just nailed it.”

The tricky part of “Marriage Is a Dungeon” actually came when it was time to craft Josephine’s bridge and find a melody during which the two characters could later sing over each other, Bromfield explains.

Press PLAY above to get more insights from the composers and to watch Waisglass and Griffiths knock the musical number out of the park. Plus, check out the complete Season 2 soundtrack here.

Johnny Depp boasted he got the 'charges dropped for five mil' after settling his divorce with Amber Heard, court hears