Home » TV & Movies » How to Give a Great Mockumentary Performance

Usually when the subject of a documentary sits for an hours-long interview, they’re pulling their responses from memories and past experiences. It’s a culmination, rather than a beginning.

For Misha Brooks, playing the part of enigmatic veteran gamer Creamcheese in the Paramount+ mockumentary series “Players,” that experience was flipped. The team behind “American Vandal” envisioned “Players” as a follow-up that could approach the worlds of Epsorts and sports documentaries the same way their first show tackled the particulars of true crime. So Creamcheese becomes a quintessential lead figure in a shuffled-timeline, retrospective, “The Last Dance”-style look at a quest for a championship, this time in the world of League of Legends. Over the course of ten episodes, the show cuts back to “interviews” with Creamcheese as he outlines the history of his team Fugitive and its run for LCS glory.

It’s a simple idea in theory, but the logistics of production made those interviews one of the most difficult tasks of the season.

“It was super challenging, because we did them in the beginning of the shoot, basically. So they were referring to a whole season that we had yet to shoot,” Brooks said. “We would do 45-minute takes and the whole thing would take so long. I think that’s just part of the hero interview form, is that kind of durational aspect of it.”

Those interviews are the tip of the iceberg for one of the most lived-in, natural performances that the fake documentary subgenre has produced. Even as “Players” shows moments that make Creamcheese squirm, Brooks keeps things locked into the particular brand of empathy that these things require. There’s the freedom to let Creamcheese be a real jerk when he wants to be, but then a real source of pathos when the show needs him to be.

To the extent that Brooks had to rework any acting instincts, it was realizing that the most valuable parts of his performance wouldn’t necessarily be any particular line deliveries. It would be the offhand comments, the darting eyes, or the slight trip-ups that make a fake documentary feel like a real one. Series co-creator and director Tony Yacenda structured the shoot in a way that allowed for those to bubble to the surface.

“I think it would be problematic to try and create imperfections. They let these takes run for so long sometimes that it’s impossible that there won’t be imperfections. I think it’s Episode 4, I’m lying on the couch, and I say, ‘Why cannot we buy Fugitive?’ I had no memory of saying that that way. It’s absolutely insane. But of course, that’s the type of line they’re looking for. That’s the line reading they want.”

Brooks outlined the idea that there was a clear structure in place for “Players” but that everyone involved had the freedom to move around within that in order to build on top of it. On interview days, Yacenda’s behind-the-camera approach helped facilitate that. 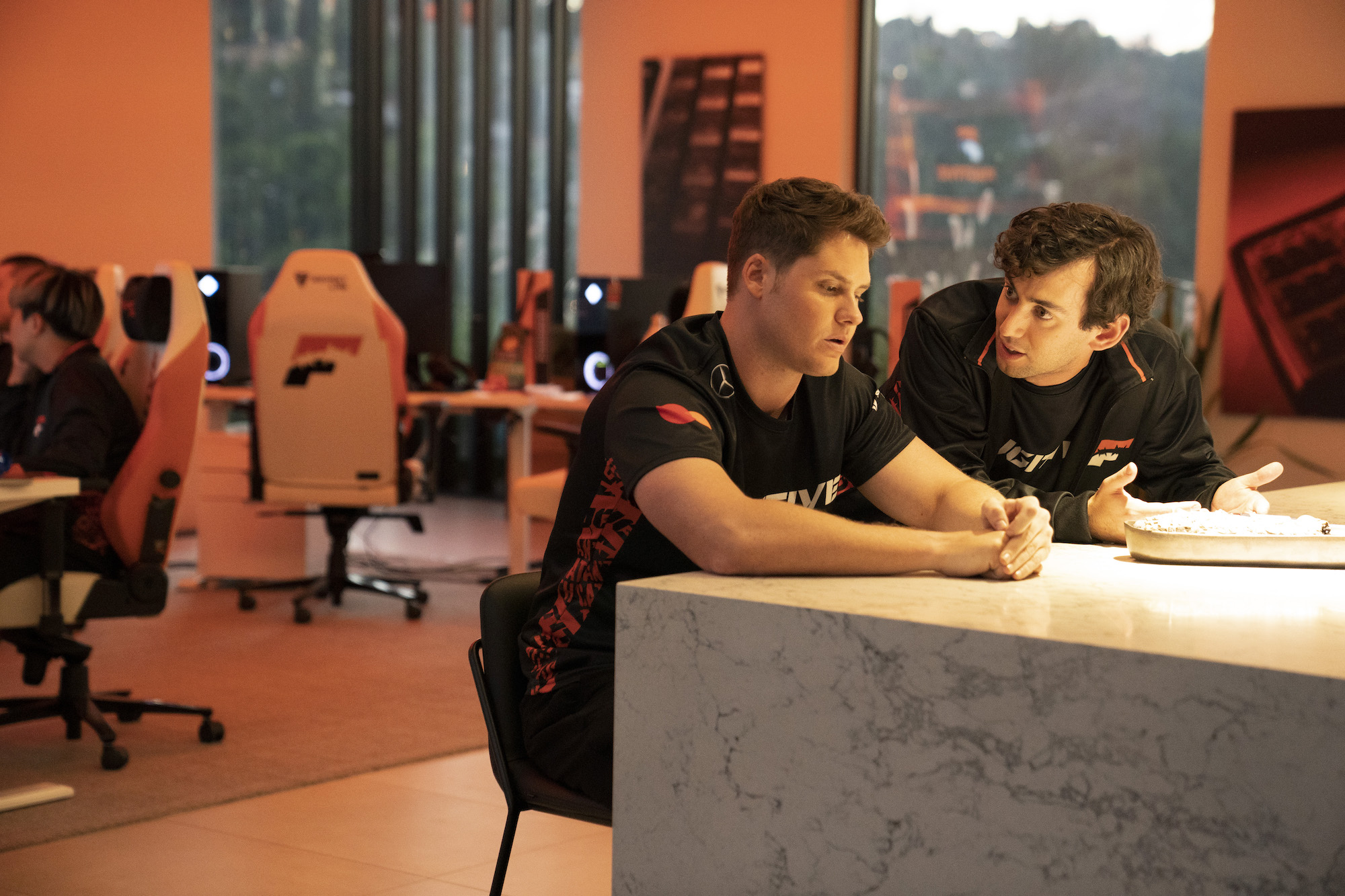 “This was the experience many times throughout the shoot, from the audition to the end. They send you the sides the night before, the new pages. You prepare, you prepare, you prepare, and think, ‘Shit, I have so many lines.’ And you sit down and Tony maybe is on-book. But he interviews you, essentially,” Brooks said. “Tony is sensitive, in particular, to overdramatizing. He doesn’t want to tip his hand too much. I think he likes to push out and then pull back.”

That concept went for any Fugitive team scenes, too. With Yacenda and fellow co-writer and co-creator Dan Perrault on hand, there was flexibility in figuring out different wordings or different attitudes that would get these sequences of confrontations or heart-to-hearts or existential crises where the rest of “Players” needed them to go.

“I remember the first scene I shot with Matt Shively, who played Frugger. It was his first day on set and there was a three-line scene. And Tony was like, ‘Alright, so we’re just gonna roll the camera. Probably going to do three minutes on this take.’ Matt looked at me like, ‘What…?’ And Tony says, ‘Action!’ And I was like, ‘I don’t even know how we’re supposed to fill three minutes.’ Luckily, he’s an amazing improviser and really, really funny. But that was the spirit of it,” Brooks said. “You hit the lines and then there’s time to kill or you just try and live in the in the moment. It was not prescriptive. You weren’t freefalling at all. Someone was in charge. Someone had an idea. And that’s kind of the dream, to me.”

The camera crew was also a fundamental part of that. Brooks credited camera operators Nathan Ray Salter and Jamiel VanOver for having the agility to move around a space and adjust to action that might play out with completely different blocking from take to take. As Yacenda mentioned at the time of the season finale, he would intentionally avoid doing blocking rehearsals for the first takes so that the camera crew didn’t know exactly how things would play out.

“They themselves have to be comedians in their own right, pushing in on on things, finding the moments in between, and moving with us. Sometimes, Nate would be like, ‘It’d be so great on this next take, if you didn’t walk into this corner. But you can, you can! It would just be so much easier for me if you didn’t. If you want to do it, you can do it.’ So, it was very free. And it was really fun moving with the cameras,” Brooks said.  “I also think it’s crucial, performance-wise, to remind me that the cameras were there for for Creamcheese as well. You train yourself as an actor to become desensitized to cameras. But the whole thing is that they’re being filmed and you behave differently when you’re being filmed. So it’s nice to have an awareness of the camera.”

From the beginning of the project, Perrault and Yacenda wanted the esports elements to be able to stand on their own. Brooks was a relative rookie in that area, so part of the training meant diving headfirst into a world he barely knew. The main goal was to be able to go off-script at points while still sounding authentic, but there was a key emotional component to it, too. 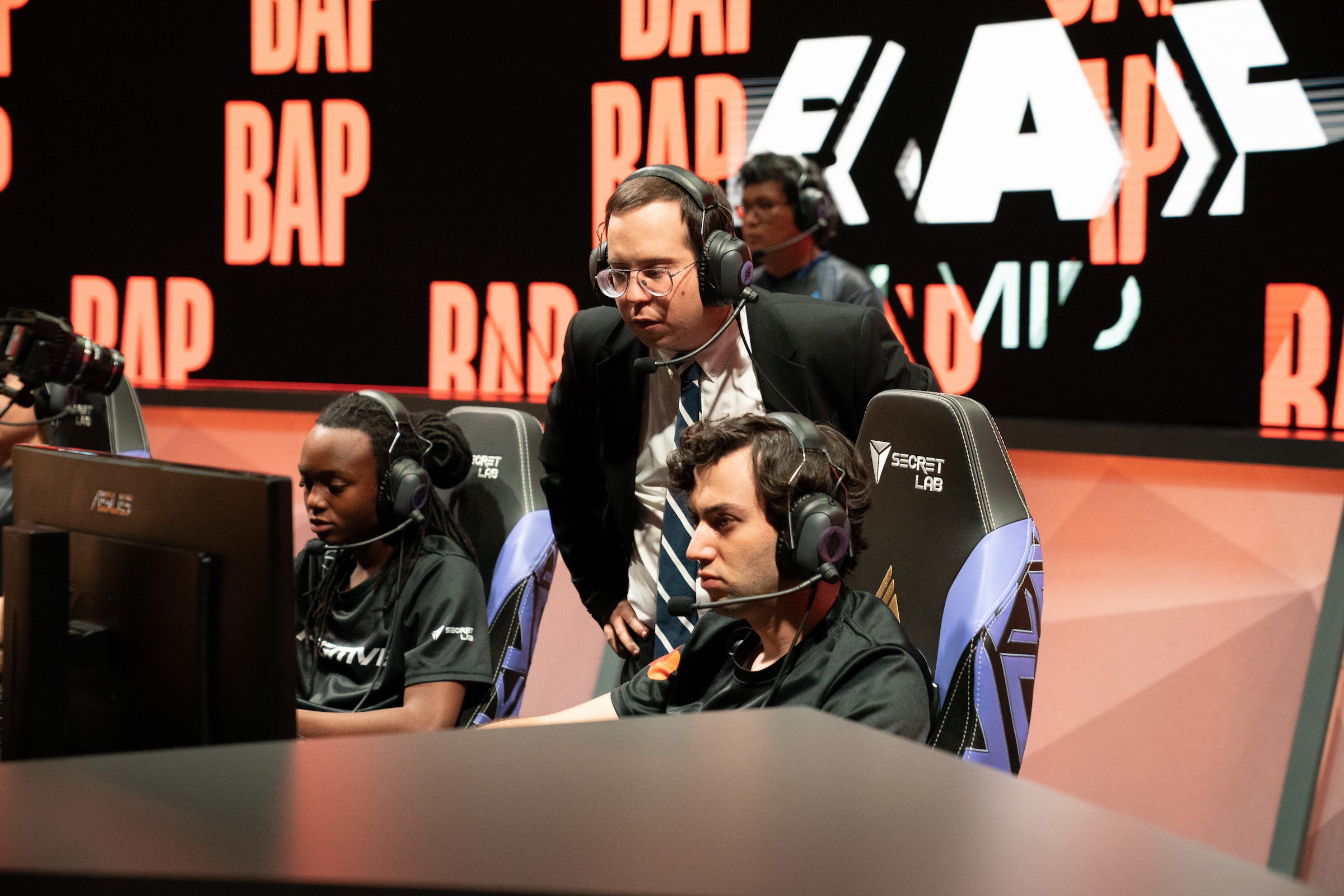 “There are these cool documentaries that are made within the esports community that the teams create themselves that really give an insight to the personalities, the dynamics,” Brooks said. “‘Breaking Point’ was a big one for all of us. And then I would watch streamers, particularly streamers who had boisterous personalities. I really wanted to see people who wear their hearts on their sleeve or try to cover up themselves but incidentally wear their hearts on their sleeves while doing so.”

For the actual gameplay scenes, when Fugitive competes against rival League squads, Brooks had to balance being on a solo-computer island with the timing and precision that makes those moments feel like footage from actual LCS matches.

“There were like 16 cameras rolling at once on those things. We had Tony in the headsets. He or Jatt [Josh Leesman], one of our League consultants would walk us through the game and tell us, ‘We’re gonna steal the Baron’ or ‘We’re gonna hit the Nexus in 3…2…1…Go!” Brooks said. “It was a lot of reacting when nothing’s happening on screen. As the shoot went on, the gray screens kind of dropped away and we started having some footage of gameplay. But it was a mix.”

Away from the keyboard, one of the trickiest scenes in “Players” comes about two-thirds of the way through the season, when Creamcheese goes back to his hometown for a high-school reunion. Up to that point, the audience has seen Creamcheese fail in his own ways, either in relationships with teammates or in big situations in an arena. That reunion scene made Brooks strip away all of the genre considerations and just focus on being as real as possible as his character faces some more uncomfortable truths. It’s a case study for the entire season: Trust the emotion and let all the documentary stuff come after.

“My whole goal as an actor is ego death,” Brooks said. “I really like those moments where the guard is down and so any shot is a critical hit. I liked that episode because I like seeing Creamcheese outside of this world. When the context changes, he becomes such a different character. I find Creamcheese to be particularly emotional and childlike. He slips up a lot. His facade drops a lot because he’s just someone who leads with his heart and has a lot of reasons to want to protect himself. He’s kind of victim to his own his own sensitivities. The more layers you add, in a way, the more layers you take away.”

“Players” is now available to stream on Paramount+.

These Sale Prices on Designer Bags, Shoes, and More Are So Low, It Feels Illegal

Un-Cancellation Poll Results: Star and Whiskey Cavalier Are the Axed Shows You Most Want to Be Saved