[Warning: The below contains spoilers for “Do Revenge,” now streaming on Netflix.]

A modern update on “Clueless” and “Cruel Intentions” with a “Strangers on a Train” twist? Well, we might not immediately think of Marlon Brando or Paul Newman as inspirations for a Hitchcockian ode to classic ’90s teen dramedies, but we are not Hollywood royalty, Maya Hawke.

The star of Jennifer Kaytin Robinson’s “Do Revenge,” now streaming on Netflix, revealed that she was inspired by iconic male onscreen villains while preparing to embody Eleanor, a seemingly innocent new girl on campus who is out for revenge. Eleanor gets schooled by “revenge mommy” Drea, played by Camila Mendes — but Eleanor has more than a few twists up her sleeve.

“I really tried to look at male performances because the nature of both of the lead characters aren’t necessarily ‘likable’ 100 percent of the time,” Hawke told IndieWire. “And I feel like men are often given a lot more permission to be unlikable, but to still be lovable. I really wanted to draw from that, draw from Joaquin Phoenix, draw from Paul Newman, draw from Willem Dafoe, draw from some really great actors that I normally don’t really give myself permission to get inspired by.”

Hawke added, “I think about how they’ve made characters that they’ve played lovable even when they weren’t likable.”

Hawke’s father Ethan Hawke recently helmed the documentary “The Last Movie Stars,” capturing the lives and legacies of Paul Newman and Joanne Woodward, so Hawke didn’t have to go far for her Newman watchlist to prepare for “Do Revenge.”

“I do remember talking to my dad, asking for recommendations for villain movies, and he did he told me to watch ‘Hud’ with Paul Newman, which I ended up watching, and he is such an unlikable character,” Hawke said. She also cited “Streetcar Named Desire” among her watchlist picks, but added that she channeled the “man with the barbed-wire soul” tagline for “Hud” while approaching the character of Eleanor.

“I really took that to heart. I don’t think Eleanor has a barbed-wire soul, but I think there’s a time in which Eleanor thinks she has a barbed-wire soul and is very judgmental of herself,” Hawke said. “You only act as badly as Eleanor acts if you sort of feel like you have nothing to lose, if you believe you are already broken. I think Eleanor, throughout the movie and through the relationship with Drea, starts feeling less broken in the end.”

Hawke credited “hero mentor” writer-director Robinson for penning a “very exciting” twist for Eleanor that “lured the audience into a false sense of security,” with viewers at first glance easily comparing Hawke’s unassuming Eleanor to her “Stranger Things” character Robin.

“We think Eleanor is an awkward beta,” Hawke said, “but then getting to kind of explode out of that into something else felt like a way to introduce a new side of myself and break that mold.” 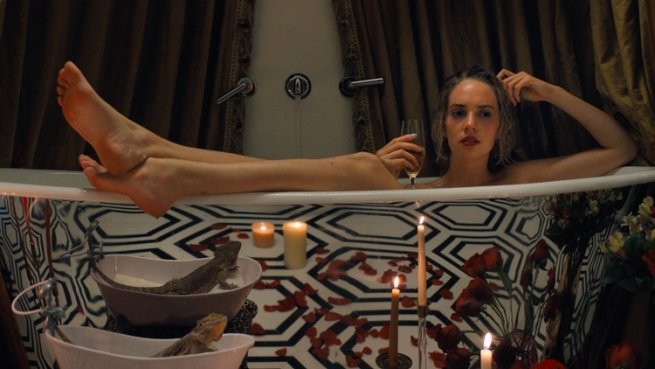 Maya Hawke in “Do Revenge”

Director Robinson added, “When I came up with this concept, I knew it was going to be a beta and an alpha,” citing Eleanor and Drea’s dynamic. “It definitely didn’t happen this way, but this is how I remember it: I sat up in bed, and I was like, ‘What if the beta is the alpha?!’”

Robinson continued, “To me, as a writer and as a filmmaker, if I have an idea, I always ask, ‘How can I move that idea forward, one more beat? How do I best it?’ The idea of making this movie and being able to have something that you can watch twice, that you can watch once and not know what you’re going to experience, and then go back because there are so many moments in Maya Hawke’s performance, that when you watch it a second time, you’re like, ‘All the signs were there.’ If you don’t know to look for it, because it’s so subtle and her performance is so amazing, you will be surprised. The twist is what makes the movie different, because I think the story could live without it. But I think the twist is what to me makes it feel like gives it that unique special sauce.”

“It was terrible,” co-screenwriter Robinson joked of getting into the mindset of a faux-woke high school boy. “It’s kind of the intersection of performative gender and performative feminist allyship. And I feel like that’s very present right now. But it’s kind of hard to detect, like I feel like the bullshit meter is going off the charts on a lot of these people. You’re just like, ‘Is this real? Are you doing this for clout? Are you doing this because you feel like you are supposed to?’ And it was just such a fun place to play with in a villain that you’re creating for a movie today.”

Robinson revealed that, while she was toying with another twist at the very, very end involving Hawke’s Eleanor and Abrams’ Max, she ultimately decided against it.

“That was always the story I was telling: Yes, it’s in this very fun, kind of pulpy, poppy revenge package, but really, it’s a story about the trauma that we endure and the wrong ways in which we try and heal ourselves,” Robinson said. “This messy rollercoaster leads to just accepting that there is there is no quick fix, like there is nothing that is going to immediately heal you. There is no one thing: It’s really just time and therapy.”