House of the Dragon returned to HBO with the royal wedding of Rhaenyra Targaryen (played by Milly Alcock) and Laenor Velaryon (Theo Nate). However, the celebrations were interrupted when Alicent Hightower (Emily Carey) made her late entrance wearing a green dress loaded with symbolism.

Following the release of episode five, We Light The Way, viewers are officially halfway through the first season of House of the Dragon.

The instalment also marked the next step towards the brutal and highly anticipated war over succession.

After King Viserys (Paddy Considine) married his second wife, Alicent, he began to pressure his 15-year-old daughter and heir Rhaenyra to get married.

Although initially opposed to the idea, she officially tied the knot in the most recent episode. 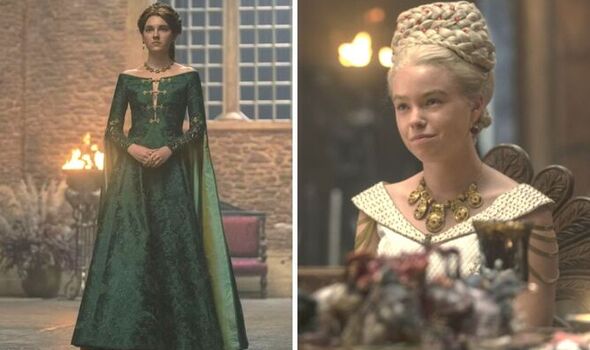 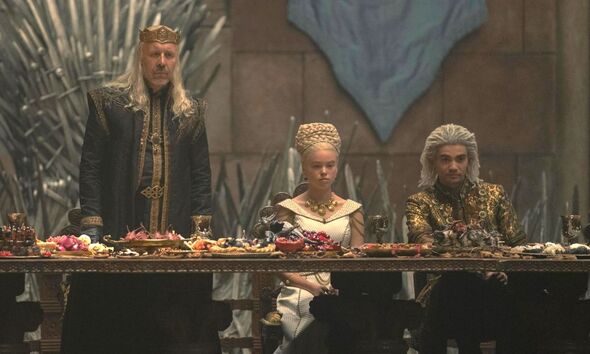 Queen Alicent was noticeably missing during the welcoming banquet as guests from across the realm arrived and took their place.

However, as formalities began, Alicent made a jaw-dropping entrance during the King’s speech and caused an interruption.

Having entered wearing a green dress, Alicent showed a symbolic loyalty to the House of Hightower over the Targaryens.

As she took her seat at the King’s right, whispers and murmurs could be heard from across the room because green was the colour used by the Hightower family to signal war. 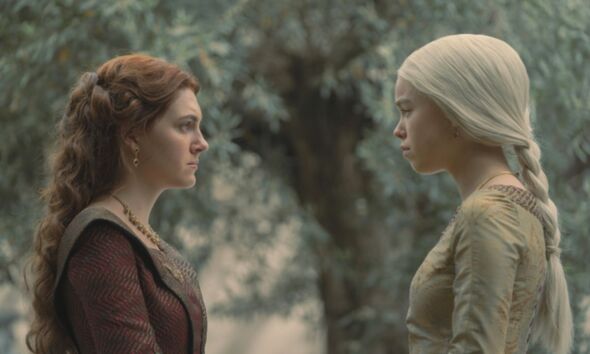 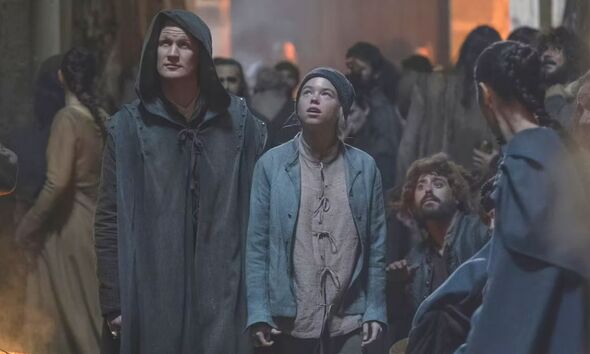 Her outfit choice sparked such a controversy that Larys Strong (Matthew Needham) said: “The beacon on the Hightower. Do you know what colour it glows when Oldtown calls its banners to war?”

This was as close to war as Alicent could get, by wearing the colour green she had chosen to oppose Rhaenyra publicly.

The Queen decided to do so after she realised Rhaenyra had manipulated her and been the cause of her father Otto Hightower’s (Rhys Ifans) dismissal as the King’s hand.

This came after Otto received word that Rhaenyra was in a brothel and was about to have sex with her uncle Daemon Targaryen (Matt Smith).

Alicent overhead Otto break the news to Viserys and confronted Rhaenyra with disdain and demanded she told the truth.

Although she had snuck out and was prepared to sleep with her uncle at his favourite brothel, Rhaenyra denied the allegation and maintained her innocence to her father, King Viserys.

The future Queen then shifted the blame to the source of information, Otto, and insisted he had lied to secure the Iron Throne.

After the death of the King’s first wife Aemma Arryn (Sian Brooke) and their newborn son Baelon Targaryen, Otto pushed for his daughter Alicent to become the next Queen.

Viserys’ choice to make Rhaenyra the next heir had been a controversial one as she was a woman.

With this in mind, Rhaenyra suggested Otto made up lies to bring shame on her and remove her as the next heir, so his grandson could be named.

Upon realising she had been manipulated, Alicent’s choice to wear a green dress was the most powerful stance she could make, and could very likely have ramifications for the future of Westeros.

If You're Thinking About a Cheeky Bikini For Your Next Vaca, Iskra Lawrence Found the Perfect 1