Darren Stanton joined GB News hosts Anne Diamond and Stephen Dixon on Sunday morning to discuss Queen Elizabeth II’s funeral, which will take place on Monday, September 19. During their conversation, talk turned to Prince William and Harry reuniting outside Windsor Castle after they did not speak to one another properly since 2020. Looking at their body language, Darren analysed the way Harry always took his wife’s hand and the support she has given him over the last couple of weeks.

Asking Darren for his take on their actions, Stephen asked: “Last but not least, Darren, let’s have a look at the Duke and Duchess of Sussex and now the Prince and Princess of Wales. What is happening here, Darren?”

Darren explained: “Interestingly, generally Prince William and Kate in any other certain situation like when they did the royal premiere at the Bond film, they were holding hands.

“They were showing displays of affection. It is interesting they decided that was probably a little bit inappropriate, whereas Harry was holding hands with Meghan.

“I don’t know who initiated the holding hands, but generally, I think it is Harry that tends to go for Meghan’s hand a lot, and that is kind of a reassurance gesture. 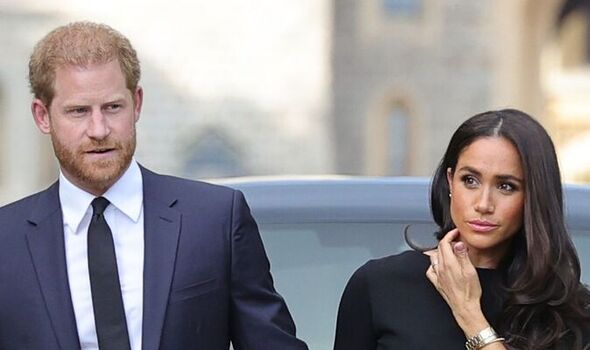 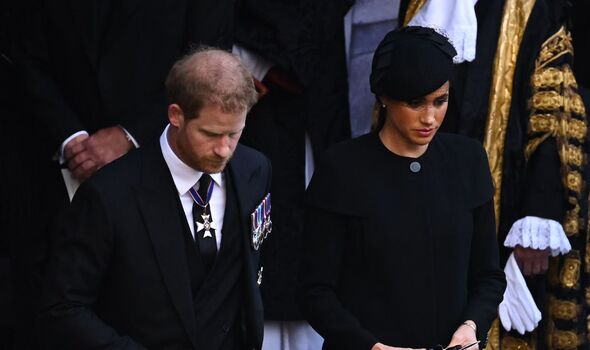 “It’s no secret that Harry is very distant from the press, and I think it is just showing the fact that Meghan is making the effort to support Harry.

“You can see William and Kate in terms of being introduced to various events recently, they are being groomed for the next big job.

“They are already kind of ready in a way effectively we are seeing two different relationships with Meghan and Harry and William and Kate.”

On Wednesday, September 14, Queen Elizabeth II was moved from Buckingham Palace for the final time and went to Westminster Hall. 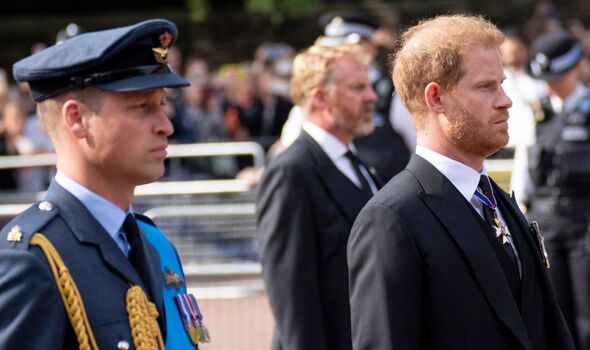 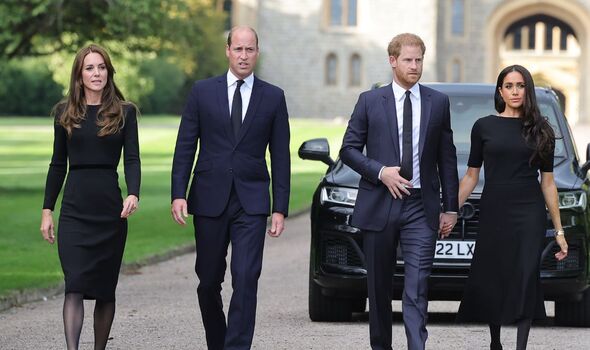 A 20-minute service was led by the Archibishop of Canterbury accompanied by the Dean of Westminster, followed closely by King Charles III.

During the service, the senior royals stood in formation facing the coffin on its purple-covered catafalque, which was flanked with a tall, yellow flickering candle at each corner of the wide scarlet platform.

As Harry and Megan walked behind the Prince and Princess of Wales, they tightly gripped each other’s hands.

According to The Telegraph, the Sussexes are now trying to work out whether their nanny Doria Ragland and the children should fly out to the UK.

Harry and Meghan have two children, Archie and Lilibet, who they left behind in their home in California after the news of Queen Elizabeth’s death.

The decision to bring the children over comes after it was revealed the couple will stay in the UK until the official mourning period ends, which will be seven days after the funeral service.

The lying-in-state of Queen Elizabeth II will formally end at 6.30am on Monday morning.

Crowds are expected to line the funeral procession route in London and in Windsor, while 2,000 guests have been invited to attend the service at the Abbey.

At 11am The Queen’s funeral will officially begin at the Abbey and will be conducted by the Dean of Westminster.

12pm will see that around midday, the Queen’s coffin will be placed on the gun carriage for the procession through London.

At the end of the day around 7.30pm, a private interment service will take place in the King George VI Memorial Chapel.

The Queen’s coffin will be laid to rest alongside Prince Philip’s coffin.

Back to work blues: Temperatures plunge by 10C

Vardy could settle with Coleen Rooney in 'Wagatha Christie' case