Home » TV & Movies » Piers Morgan clashes with Chris Eubank on Life Stories: ‘Did you purposefully cut me off?’

The Good Morning Britain presenter interviewed former boxer Chris Eubank on tonight’s Piers Morgan’s Life Stories. Eubank had quite the turbulent life to tell the audience about: the horrific boxing accident with Michael Watson, the divorce to Karron, the bankruptcy and the decades he spent in the limelight. But his interview with Piers tonight will hardly be remembered as a highlight to his career as he kept clashing with the presenter.

Piers definitely didn’t start the interview on the right foot as he immediately asked the boxer to assure him he wouldn’t be in any physical harm during the night.

Starting off gentlemanly, Chris ensured Piers that punching him would be a detriment to the rest of his boxing career and they started the interview, though the sparring was only just beginning.

Even at the most harmless of question like what car he is currently driving, Chris was refusing to give a straight-forward answer.

“I’m not trying to be a tabloid,” said Piers, who was accused by Chris of “reverting to your early days in journalism.” 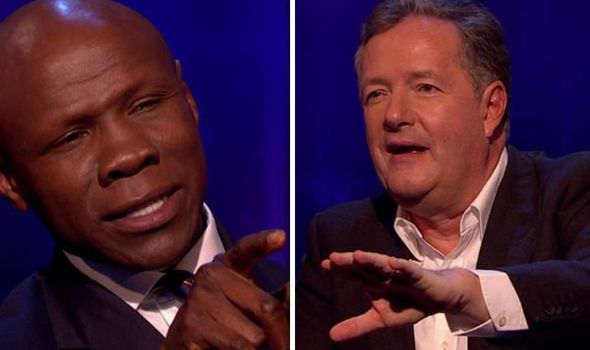 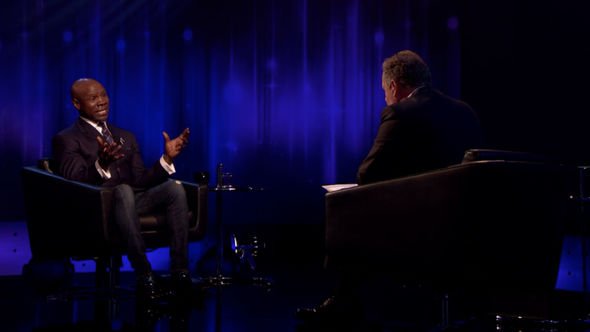 “No, I am asking you for factual information,” replied the presenter, “and it seems to me what you are doing is for some reason, you are slightly embarrassed about showing or talking about the excess that was going on.”

“I am not embarrassed, I am a gentleman. I never want to entertain in such a way where I am paying a price for it,” explained Chris, and as Piers tried to cut in with a follow-up question, Chris snapped angrily: “No sorry let me finish.”

“Hang on here! You were the biggest showman in Britain’s sport. Of course, you wanted people to say ‘Look at me’. That was part of your schtick,” continued Piers.

“We are boxing now, the jabs are going strong. You are trying to come in with a big haymaker and I’m like ‘Wait a second’ – bum, bum, bum!” said the presenter.

Chris Eubank asks Piers Morgan ‘did you purposefully cut me off’ 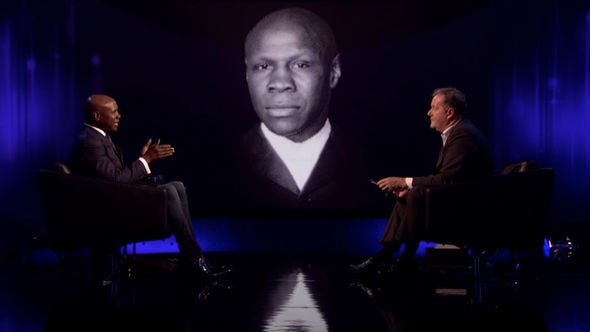 As the programme continued the blows didn’t get any softer.

Piers asked the former boxer about his childhood with his father describing it as violent, but Chris didn’t like that description and challenged the presenter saying that his father “taking his belt off” might be considered violence today but he saw it as “steering”.

The sportsman then argued that without discipline, “these youngsters would become menaces to themselves, never mind what society-” before Piers, unwilling to entertain this conversation, tried to move on to the next question.

Chris however was not willing to let it go and rebutted: “Can I ask you, did you just purposefully cut me off?”

A surprised Piers then justified himself saying “No, no, no, I understand exactly what you were saying.”

Chris then reiterated his view of education to a timid applause from the audience, before Piers argued back at him that he thought that Chris didn’t turn out the way he did because of his father’s discipline but despite it, and that the violence in his household caused him to be an unruly child.

Chris again dismissed the presenter’s point, denying ever being unruly, despite admitting to having been suspended from school 18 times in a year, and he went on to argue that he was being chivalrous and doing the right thing by fighting for kids who were being bullied.

In what is probably a first in Piers Morgan’s career, the journalist saw there was no point in arguing any further about the topic with Chris and moved on to a different question.

Towards the end of the show, Piers touched on the topic of drugs with his guest, who admitted to having made use of Cannabis in the past but not being an active user now.

Piers then chased this bu asking Chris about his opinion on legalisation, which he deflected not very masterfully asking back “What do you think?”

“Well you tell me, I am interviewing you,” replied Piers.

Chris on his behalf replied “Really, you are the journalist?”, and Piers tried to bring the conversation back on track joking “No really, it’s called being on Life Stories. It’s not my job to provide the answers to my own questions.”

Life Stories airs on ITV tonight at 9pm while The One Show airs weeknights on BBC One at 7pm.

Many 'march for love' in New Zealand as mosques reopen

Labor Day Sales A to Z