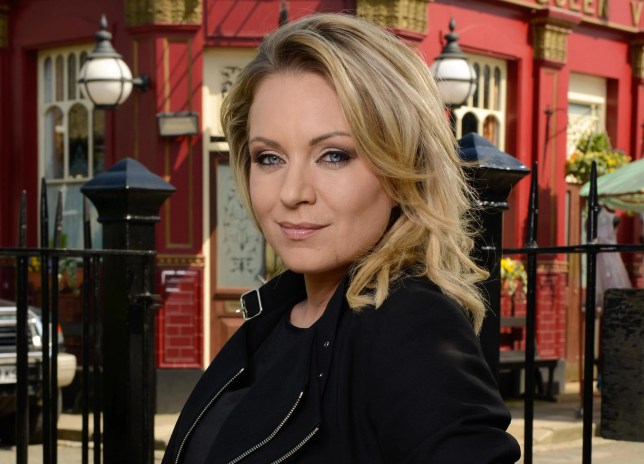 It remains one of the biggest TV travesties of our time, but Rita Simons reckons that EastEnders could still reverse the deaths or Roxy and Ronnie Mitchell.

And, to add to the hope, she’s more than up for reprising the role, reminding everyone that Den Watts and Kathy Beale both returned from the dead previously.

Roxy and sister Ronnie, played by Samantha Womack, both died in a horrible drowning accident in a swimming pool in 2017, and our emotional scars haven’t healed.

In the wake of rumours that Arthur ‘Fatboy’ Chubb may still be alive out there, given that a card to Dot was sent calling her Mrs B, returns from the dead are a hot topic among fans.

Top of everyone’s list will always be the Mitchell sisters.

Rita first entered the topic when she was sent a picture of Ellie Dadd in the role of Amy in the show.

So did Cathy. And Den. And Bobby Ewing ð

She suggested that she would like to work with her, before being more blatant and pointing out that it’s not impossible for her character to come back.

In the wake of this, fans have jumped on the idea, sharing outlandish theories on how the show could get around the fairly obvious obstacle of us seeing the bodies of Roxy and Ronnie.

But, as it’s a soap, nothing should be ruled out.

After Rita quote-tweeted the picture of Amy, asking if this was her offspring (while wishing her better luck than Roxy #NoSwimmingPools), one fan shot down the possibility of a return by reminding us that Roxy is dead.

Talk about a buzzkill. But Rita wasn’t having it.

‘The message was met by one fan saying: “‘Hopefully you get to share the screen with her one day,’ one enthusiastic viewer said, which prompted the ‘Roxy died’ comeback.

But Rita soon waded in: ‘So did Cathy. And Den. And Bobby Ewing,’ alongside a devil emoji.

And thus, so can Roxy. We buy that.

In fact, most viewers have been tweeting that they actually don’t care if EastEnders takes liberties with realism with this one.

We can all just pretend that, like Bobby Ewing’s end, that swimming pool was just a bad dream.

These trousers are everywhere on TikTok, and they’re the perfect office staple

The untold truth of Emma Roberts