Stormy Daniels has today (August 20) revealed her reasons for pulling out of Celebrity Big Brother.

The adult actress was set to take part in the Channel 5 show this year, but dropped out just hours before she was due to enter the house.

On Friday (August 17) she was then meant to appear on Loose Women to explain her reasons, but didn’t go live. Instead it fell to Jane Moore to read a statement from her.

It was stressed before the interview went out that she received no money for the appearance, and that a donation was made to Oxfam.

Explaining that she felt “pretty stressed and extremely irritated,” Stormy opened up about how her life has changed since her alleged affair with Donald Trump, revealing she now has two armed bodyguards with her at all times.

When asked if she was giving interviews as a way of feeling safer, Stormy agreed and said she was “hiding in plain sight”. 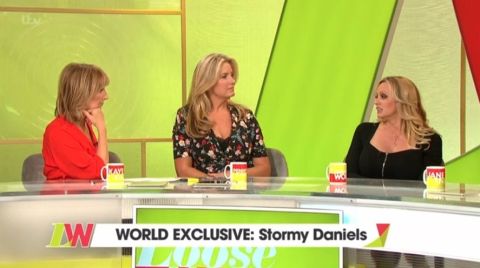 “Some days I can slip out and go about my day and I feel normal again. Another day I get crazy hate mail and death threats. I already had my own set of fanatical fans to deal with,” she said.

She also explained the effect it has had on her daughter, saying: “That’s my biggest fear, her life is going to be changed forever in a negative way. It’s why I came forward and started speaking up.”

Stormy also explained the reason she didn’t on CBB, admitting that it was because there was a development in the custody agreement of her seven-year-old daughter.

“I told the truth to the producers that I was uncomfortable spending the night in the house,” she said. “Being a mum comes first and I wanted to talk to my daughter first.”

The 39-year-old also claimed that Channel 5 were not happy with her decision not to enter straight away and told her “you either go on and stay in the house, follow the contract to a tee or we deport you tomorrow at 6am”.

“No way I was going to get on a plane and wake up to the headlines ‘Stormy Daniels gets deported’ and not tell my side of the story,” she added.

Why Duchess Kate Is Going Through a ‘Style Overhaul’