Home » TV & Movies » Sugar, Spice, Animatronics, and a 10-Year-Old Dancer with a Brown Belt in Karate: That’s What M3GAN Is Made Of

It’s not easy to create a new horror icon, but the title character in “M3GAN” is so perfectly calibrated to deliver maximum shocks and laughs that she seems destined to join the ranks of Freddy, Jason, and fellow killer doll Chucky. Eerily realistic and relatable yet with an uncanny quality that grows more and more unnerving the closer the camera gets to her, M3GAN is a mesmerizing presence whether she’s calmly sitting at the dinner table with her “family” or performing a bizarre dance just before she takes out one of her victims. In this day and age one might assume that such a distinctive, original character is a digital creation, but director Gerard Johnstone quickly puts that theory to rest: “There are only two or three shots in the movie in which M3GAN is entirely CG,” he told IndieWire.

In fact, bringing M3GAN to life involved a combination of visual effects, animatronics, puppetry, and a human actor. “The methodology was essentially to use an animatronic puppet when she’s still, and as soon as she starts moving she’s a girl in a mask,” Johnstone said. “The CG is there to give her face some articulation, because she’s wearing a mask and the mask is not animatronic. She basically just has her mouth open the whole time.” The need to use a human actor arose partly from the film’s modest resources. “We didn’t have the budget for a Boston Dynamics robot, but we didn’t want to rely on strings or puppeteers in blue suits or anything like that. So that left us with the impossible task of finding a girl who was roughly the same age as Violet [McGraw, who plays M3GAN’s owner] and could do all this physical stuff and act with Allison Williams.”

Johnstone initially assumed that his human actor would be used only for wider shots, but once he cast young dancer Amie Donald in the role he realized that her dedication and physical abilities would enable her to play M3GAN in a wide variety of scenes where she was utterly convincing no matter how close the camera got. “She’s an incredible young actress, and she’s a national dance champion, and she’s a brown belt in karate,” Johnstone said. “We hired a movement coach [Luke Hawker] for her who worked at Wētā and knows about wearing prosthetics and how to work within these suits, and then we had a stunt team that worked with her and they were blown away by what 10-year-old girl could do. They’d be pulling out ropes, thinking they were going to have to rig something for her, and she would figure out how to do it on her own. She would figure out how to get up off the ground without using her hands after only 45 minutes of practice.” 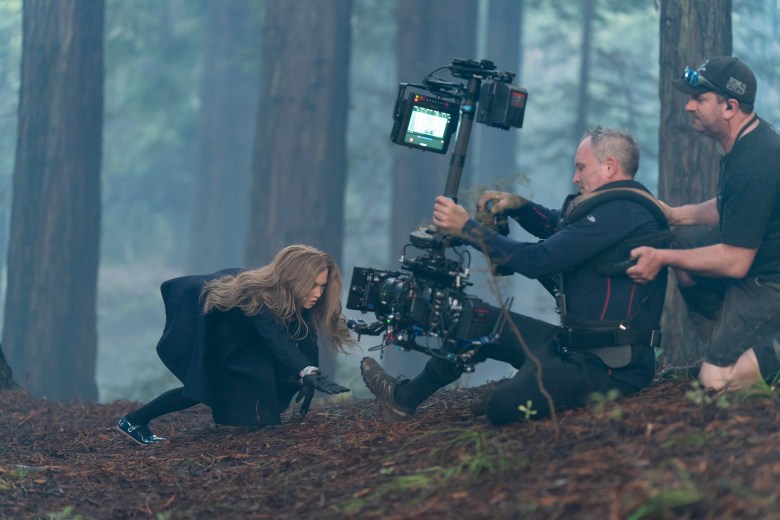 Behind the scenes of “M3GAN”

Indeed, some of the character’s most bizarre movements — the ones audiences might assume must have been created in a computer — were all the result of Donald’s amazing physicality. “She could run really fast on all fours,” Johnstone said. “She could run sideways on all fours really fast. And she was the loveliest, shyest little thing until the cameras were rolling. Then she became M3GAN. In fact, she wanted to be called M3GAN anytime she was on set.” Donald’s amazing ability to perform physically challenging acts is key to what makes M3GAN both terrifying and, at times, hilarious, which is just how Johnstone wanted it. “My first love is comedy, so I’m always looking for opportunities to make something funny. And I think making horror comedies, where you can hear people audibly laugh and scream, is just the best.”

Leonardo DiCaprio, 47, and Gigi Hadid, 27 ‘getting to know each other’

Trophy hunter is caught boasting how he helped to shoot 13,000 doves