Home » TV & Movies » The Crown Premiere Recap: The Old Ship Is Taking On Water — Grade It!

The Crown‘s fifth season set sail on Wednesday with a whole new cast and a premiere full of creaky-old-boat metaphors.

The premiere opens with a flashback to young Elizabeth (hi, Claire Foy!) christening the royal ocean liner Britannia. Now in 1991, a graying Elizabeth (now played by Imelda Staunton) is in her mid-60s, and a new poll is calling her “irrelevant” and “out of touch” while her son Charles (now played by Dominic West) is seen as “young” and “modern.” Half of those polled even support Charles taking over for Elizabeth early. Charles knows full well that the public likes him because of their love for Diana, so he dubs his upcoming family trip to Italy a “second honeymoon”… even as Camilla is blowing kisses to him through a window. 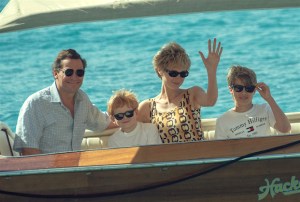 Of course the trip is hardly a honeymoon: Diana (now played by Elizabeth Debicki, and the resemblance is striking) complains that she wants to go to the beach and go shopping with William and Harry while Charles prefers historical walking tours. While Diana and her sons sail off to the tune of Mariah Carey, Charles slips and refers to her and himself as “bride and gloom.” Meanwhile, Elizabeth’s husband Philip (now played by Jonathan Pryce) hears a clanking while aboard the Britannia and tells Elizabeth her beloved ship is on its last legs: “She’s a creature of another age… in many ways, she’s obsolete.” (Catch that metaphor, didja?) Oh, and that damning poll hits the British tabloids, and Elizabeth’s staff do everything in their power to keep her from seeing it.

Philip learns that repairing the Britannia would cost 14 million pounds while Charles, buoyed by that poll, arranges a one-on-one meeting with new Prime Minister John Major (Jonny Lee Miller). Diana is furious when Charles says he has to leave their trip early, and they bicker in front of everyone. At his meeting with Major, Charles brings up the infamous poll and its suggestion that Elizabeth is showing signs of “Queen Victoria syndrome,” noting that it’s “dangerous to ignore” polls like this. It’s “equally dangerous to be guided by them,” Major warns. Charles dances around the subject, but it’s clear he wants to take control of the monarchy, and he invites Major to judge for himself whether the crown is “in safe hands.” 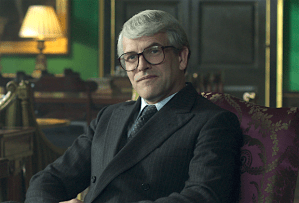 Back at Balmoral, Elizabeth finally sees the poll, splashed across the papers along with a beaming picture of Charles. She meets with Major, insisting that she actually embraces any comparison to Queen Victoria. She also asks him to approve government funds to fix up the Britannia, but he hesitates, noting that the country is in the midst of a tough recession. The Britannia is more than just a ship, Elizabeth insists. It’s another home to her, and “she is a floating, seagoing expression of me.” She pulls rank as sovereign, insisting that he approve the funds, and he seems to relent.

The family throws a Scottish ball with men dancing in kilts, and Diana looks miserable. Charles brings up the boat repair to John Major one more time, laying the metaphor on thick: “Sometimes these old things are too costly to keep repairing.” Diana pulls Major aside for a dance and tells him all of the family’s marriages are on thin ice: “I don’t give any of us more than six months.” In his bedroom that night, Major marvels to his wife about the battle brewing between the old royals, who are “dangerously deluded and out of touch,” and the new royals, who are “feckless and entitled.” As fireworks go off outside, he gazes at them grimly: “It feels it’s all about to erupt… on my watch.”

Alright, The Crown fans, it’s your turn: Give the premiere a grade in our poll, and then hit the comments below to share your thoughts. (And stay tuned to TVLine for more Season 5 coverage to come.)

After THAT Alan Shearer back tattoo went viral — can you put names to these other dismal designs?