Strange happenings are afoot in London in the new Netflix series “The Irregulars.” Scrapes with the metaphysical in and around the busy streets of Victorian England, all sussed out with a mix of deduction and intuition is the provenance of many a Sherlock Holmes story. Though “The Irregulars” is far from the first TV series to take the classic Holmes mythology and subvert it for its own purpose, none of the others have alighted on quite the mixture that powers this new eight-episode season.

Rather than foreground any of the central figures in the standard Doyle repertoire, this fashions a loose-knit group of five purpose-seeking teenagers who stumble into the same circles that the violin-playing literary icon usually travels through. They’re led by a pair of sisters, Beatrice (Thaddea Graham) and Jessie (Darci Shaw), each looking to fashion a new path in life after a harsh childhood spent mostly in a workhouse. One has a fearless, savvy resolve and the other is gradually grappling with her ability to dive inside the minds of strangers. And so the way is set for a series of paranormal amateur detective tales, bound together in a great big genre casserole.

Stopping even more widespread terror becomes a group effort, with Spike (McKell David), Billy (Jojo Macari), and Leopold (Harrison Osterfield) each doing their share of the legwork to apprehend people driven by destructive supernatural abilities. In the process, the central group gets pulled in so many different directions that there isn’t as much time with all of them as a complete unit as you might expect or want. (Jessie’s abilities in particular separate her fairly often.) What does unite them is that each of them are staring down the parts of their formative years that they can’t shake, ones that the show continues to lay out in increasingly blunt ways. 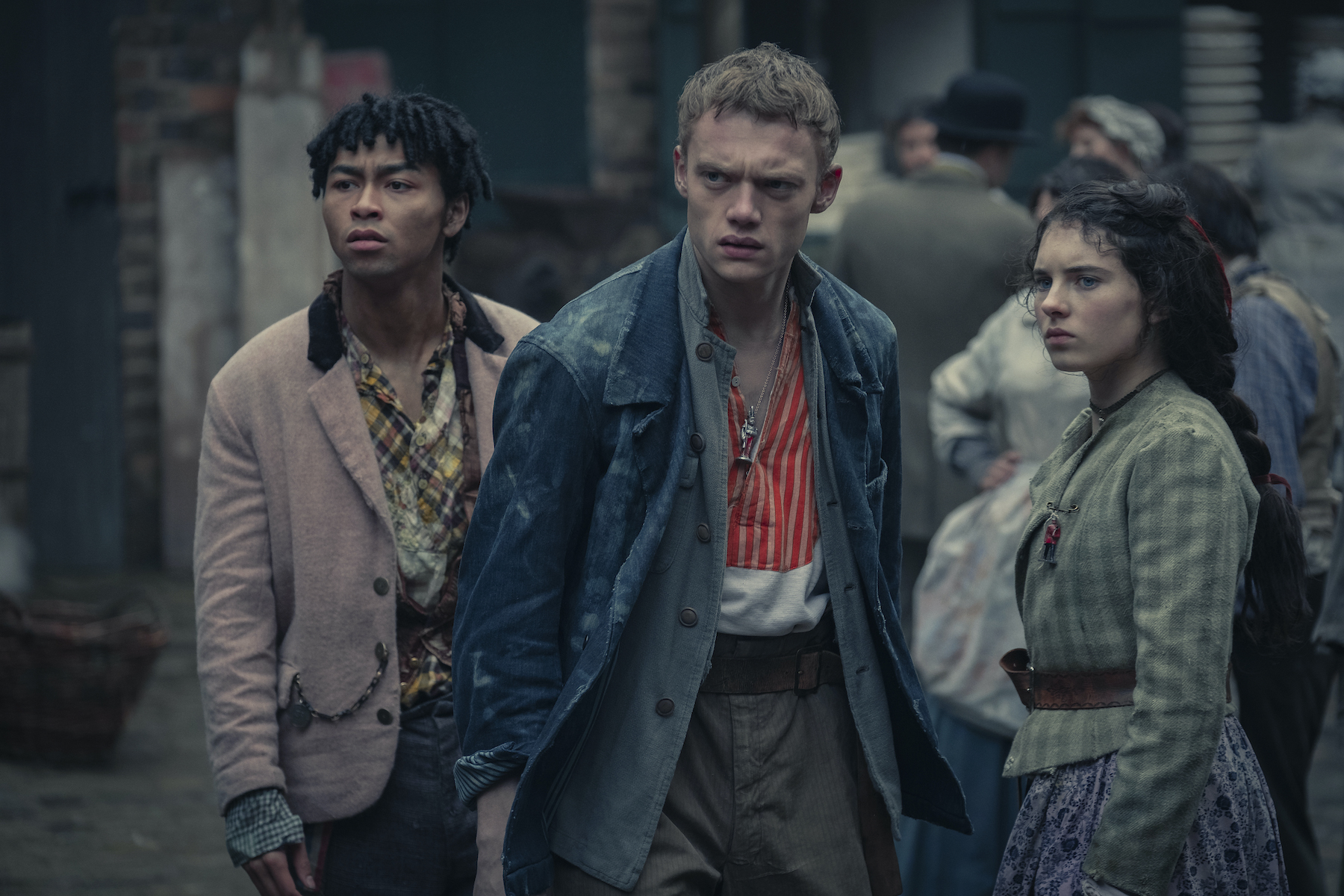 “The Irregulars,” created by Tom Bidwell, manages to utilize some of the built-in realities of a preexisting property without being beholden to it. The younger heroes are the main emphasis here, and there’s little preciousness about having to maintain strong connections to the source material. There are some nods to past interpretations, though some familiar throughlines and characters are dispatched as soon as they’re introduced. Dr. Watson (Royce Pierreson) is the biggest exception, a large presence helping to shape the ways that Beatrice and the rest of the group get involved in each passing case.

Instead, the influences are the other mystery/sci-fi/fantasy touchstones of recent decades, all with their attending benefits and drawbacks. There’s a monster-of-the-week nature to the group’s trackdown of the various London menaces on the loose. Through Jessie, the concept of a mind palace ins’t exactly innovative in how it’s used or shown, though it does offer the always-welcome chance to bring Clarke Peters into the ensemble. The swirling DNA of “Supernatural,” “Hannibal,” and even some dashes of “Dark” and “Dickinson” takes both the best and the baggage of each. Even the opening credits sequence embraces a kind of ’90s comic book aesthetic. For as much as the show sometimes hops between those modes, the overall end result coheres more than those competing styles may imply.

That’s partly due to how “The Irregulars” approaches its antagonists. Driven to extremes by trauma or tragedy, for the most part they’re not simplistic agents of evil unleashed on the greater London populace. There’s a similar sense of loss and a desire for meaning shared by the core quintet and those they’re tracking. Empathizing with the individuals stealing babies and faces and livelihoods becomes the biggest key to stopping them and bringing them back to the light.

Beatrice in particular manages to preempt so many of the “detective, investigate thyself” shortcomings that befall Holmes in so many adaptations. She and her friends are acutely aware of what they’re struggling with because they’re not allowed to forget. As the season goes on, they also start to realize how much they take for granted each other’s powers and vulnerabilities. When one character starts to become the guinea pig to lure would-be attackers, they confront the rest. 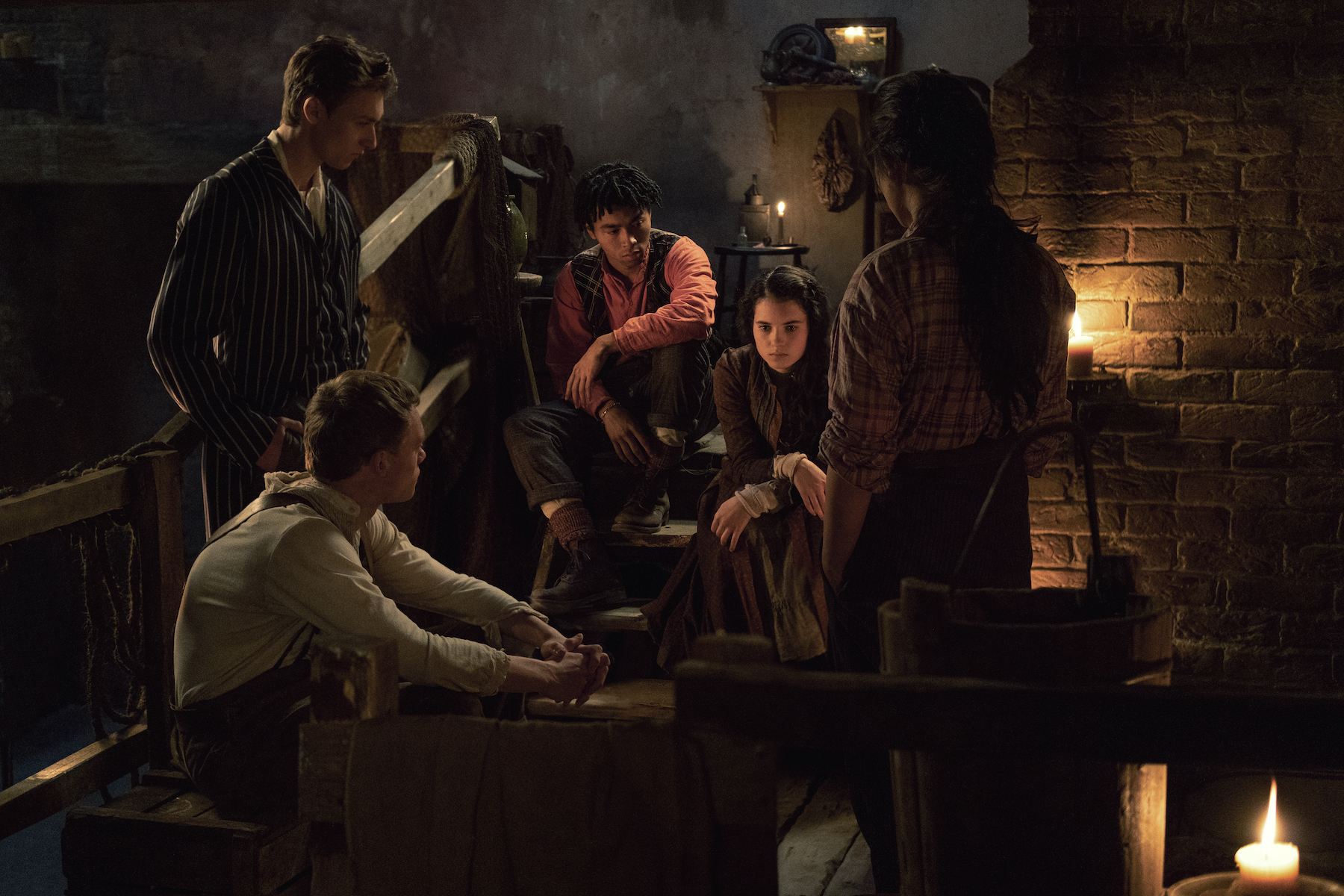 Despite so many of their characters being confronted with chaos, “The Irregulars” has less of a hyperactive energy than the other recent TV Holmes adaptations. The musical table-setting does have a CW grab bag approach (what look at a pre-streetcar England is complete without some Ezra Koenig), but when that dies down, the hourlong episodes leave plenty of room to embrace some calmer moments.

Those episodes are a bit of a double-edged sword, though. The further the season goes on, the more it sheds its procedural strengths and leans toward a more overarching story that gobbles up some of the potential to get to know its main characters better. The all-consuming nature of the pursuit of answers often leaves the main five (not to mention the ever-watchful Watson) as trapped inside their defining preoccupation. There are a sprinkling of more casual sequences that cut through the darkness. An encroaching threat does a lot to crowd those out by season’s end.

Still, the pieces put in place over the course of these eight episodes provide a sturdy foundation for more exploring. It’s hard to see what comparable force could fuel another season’s worth of brushes with the unexplained. But that’s the real trick with Holmes in the first place. As long as you have a core that you’re willing to follow anywhere, it becomes less important what they manage to encounter along the way.

“The Irregulars” is now available to stream on Netflix.

Did Ammika Harris Shade Chris Brown for Not Marrying Her? See Her Post!

The bizarre origins of 7 your favourite movie and TV characters