Los Angeles: The videos are graphic and shocking.

In January, a local television station showed footage of a young man sprinting toward, then violently shoving to the ground, a man identified as Vicha Ratanapakdee, 84, who had been out for a morning walk in the Anza Vista neighbourhood of San Francisco. He later died.

Another video shows a 91-year-old man in Oakland’s Chinatown neighbourhood being pushed face down into the sidewalk cement from behind in an apparently unprovoked attack.

The attacks quickly reinvigorated simmering outrage, fear and hurt over a wave of anti-Asian violence and harassment that community leaders say was spurred earlier in the pandemic by the rhetoric of former president Donald Trump, who insisted on calling the coronavirus “the China virus” or the “Kung Flu”. 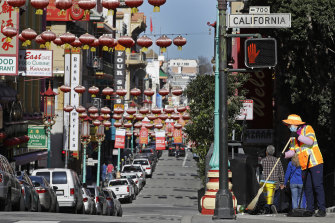 A worker cleans a street in San Francisco’s Chinatown. Police stepped up patrol and volunteers increased their street presence after several violent attacks on older Asians in the city’s Bay Area. Credit:AP

Carl Chan, president of the Oakland Chinatown Chamber of Commerce, has tallied more than 20 assaults over the past two weeks in Oakland’s Chinatown alone. Many of them were not reported, Chan said, partly because it can take hours for police to arrive at the scene.

“Our seniors are afraid to walk their own streets,” Chan said.

Articles and Instagram slideshows using a now-familiar palette of pastels and bold lettering have since proliferated, sounding alarms about rising anti-Asian violence with jarring statistics and calls to confront racism against Asians with the urgency that has animated wide support for the Black Lives Matter movement.

The violence comes as the Chinese community marks the Lunar New Year, a muted celebration after a crushing year for the banquet halls, restaurants and businesses that would normally be pulsing with holiday cheer.

The pandemic has hit San Francisco’s Chinatown, America’s oldest and largest, particularly hard. The lack of tourists; the spate of violent attacks and robberies; and pandemic-related racism against Asian-Americans have combined to exacerbate the economic pain felt in Chinatown.

A measure of the tense and subdued celebrations this year was a scene from a park in San Francisco’s Chinatown on Thursday afternoon. Will Lex Ham, a New York-based actor, was helping lead a neighbourhood safety patrol, handing out whistles to residents as well as a Chinese-language pamphlet titled, “How to Report a Hate Crime”.

In recent weeks, the outrage over the attacks has grown broader.

In early February, not long after leaders in Oakland’s Chinatown, along with Mayor Libby Schaaf, held a news conference pleading for help after a series of attacks targeting Asian American seniors, actor Daniel Dae Kim retweeted the video of the attack on the 91-year-old man, saying that such crimes “have been ignored and even excused”. He and actor Daniel Wu offered a $US25,000 ($32,000) reward for information leading to an arrest.

But while researchers have said that inflammatory statements from leaders can exacerbate racist behaviour, experts say it is difficult to quantify hate.

Incidents of racism can take many forms — like being coughed on or spat upon, or being denied a ride-share. Tallying such incidents requires that victims tell authorities or another organisation what happened, which can be difficult when they may feel ashamed or distrustful of those authorities.

Of those, the vast majority, about 71 per cent, were incidents of verbal harassment. Physical assaults made up 8.7 per cent.

One statistic that has been widely cited, identifying a 1900 per cent increase in hate crimes against Asian-Americans, appears to have a very small sample and come from the New York City Police Department, which said that in 2019, only one anti-Asian incident was reported, compared with 20 in the first half of 2020, according to The Queens Chronicle.

Russell Jeung, chair of the Asian American Studies Department at San Francisco State University and one of the leaders of Stop AAPI Hate, said that, according to the organisation’s data, people 60 and older were disproportionately targeted with physical violence, as were women.

Jeung said that it was not clear whether the recent attacks in the Bay Area were racially motivated but that it was likely that older people walking alone through their neighbourhoods to shop may appear vulnerable. And particularly around holidays, they may be carrying cash.

“We tend to see small upticks in crime during the Lunar New Year, because people are out shopping,” Jeung said.

In another widely reported incident earlier this month, a 64-year-old woman of Vietnamese descent had just left a bank with more than $US1000 in cash for the holiday when her purse was snatched.

What is clear, Jeung said, is that Asian-American communities are in pain. And even with new recognition from President Joe Biden — who last month signed a memorandum directing federal agencies to explore ways of combating racism and xenophobia against Asian-American and Pacific Islanders in the United States — there is more work to be done.

“The community is alarmed and upset, and we demand justice,” Jeung said.

San Francisco is not the only area of the country seeing a rise in hate crimes against Asian-Americans. New York City saw a large surge in hate crimes directed at Asians in 2020 and most of the increase was directly related to the pandemic, police said.

There were at least 28 hate crimes against Asians reported to the New York police, and all but four involved an assumption that the victim had the coronavirus, police said. The crimes included assault, vandalism, theft and harassment.

In August, the steep rise in bias crimes against Asian people prompted the New York City Police Department to form a special taskforce to investigate them.

“It was a huge uptick, so much so that people were starting to talk about it, and we needed to address the situation,” said Deputy Inspector Stewart Loo, the task force’s director.

But in 2021, some community organisers and advocacy groups, including Stop AAPI Hate, have said Asian Americans must look beyond calling for increased police presence in neighbourhoods to achieve that justice.

“We recognise that policing has led to the criminalisation of communities of colour, and mass incarceration,” Jeung said. “Why perpetuate a system that doesn’t work?”

The people arrested in both the Chinatown incident in Oakland and the fatal assault on Ratanapakdee are black, which community organisers said has brought to the fore some anti-black racism, particularly as outrage about the attacks has spread on social media.

Lai Wa Wu, policy and alliance director for the San Francisco-based Chinese Progressive Association, said that while the influence of the former president was a new factor, the tensions among communities of colour were not new and neither were the systemic inequities that perpetuate them.

There are no shortcuts to deep, sustainable healing, Wu said. Progress requires investing in neighbourhoods; boosting access to education, housing and food; and having “difficult, honest conversations.”

Nevertheless, she said, “It’s been really heartening in some sense, to see the level of solidarity and the amount of support, not only from our own communities in the city and across the Bay, but from Black and brown communities.”

Can YOU find the doe hiding among this field of stags?