Federal Liberal MP Andrew Laming has argued a Nine News broadcast damaged his reputation when it wrongly presented him as a “lecherous” person and a “pervert” who took a photo of a woman’s buttocks for sexual gratification.

Dr Laming, 55, who represents the Queensland seat of Bowan, sued Channel Nine for defamation in the Federal Court in August over a segment in the Queensland 6pm news bulletin on March 27 this year. 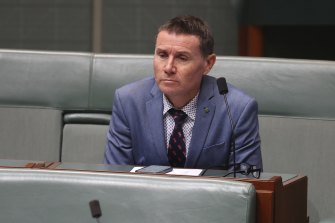 The story spoke to a woman, Crystal White, who claimed Dr Laming took a photo of her bottom on his mobile phone while she bent down to fill a fridge with drinks at a landscape supply business in Brisbane.

Dr Laming argues the report defamed him in several ways, including by suggesting he took a lewd photo of Ms White without her knowledge or consent, that he is “lecherous” in taking an indecent photo, and that he is “a pervert” who took a photo “for his own sexual gratification”.

It is argued the report also defamed Dr Laming by suggesting he attempted to befriend the woman so she would not complain, that he bullied two women online which caused one to contemplate suicide, that he should be expelled from the Liberal National Party, and that the public needed to be warned about him “for their own protection”.

In court documents, Dr Laming’s lawyers say he has “suffered substantial hurt, distress and embarrassment”, including being the subject of a police investigation which ultimately determined there was no evidence to indicate a criminal offence.

It is alleged the accusations were not put to Dr Laming before publication, and were presented in a “sensational, accusatory and spiteful tone”. Dr Laming is seeking damages, interest and costs, as well as an order that Nine be permanently restrained from repeating such claims in the future.

Nine is relying on the defences of truth, contextual truth, qualified privilege and honest opinion.

In its defence, filed on Thursday, Nine argues it is substantially true to say Dr Laming used his mobile phone to take a photo of a woman’s bottom while she bent down with her underwear exposed, and that he is a “creep” who is “unfit to be a member of Parliament”.

On Friday, Dr Laming’s barrister Sue Chrysanthou, SC, said Nine’s defence introduced material that has “absolutely nothing to do with the broadcast”, including an assertion that her client is “not fit to be an MP because he drank too much during an Australia Day barbecue”.

“That is an absurd allegation that reeks of desperation,” Ms Chrysanthou said. “It’s incapable of proving that my client shouldn’t be an MP.”

Ms Chrysanthou said the inclusion of this material would need to be argued at a preliminary hearing before a trial because it “holds up the entire case”.

There was a tense exchange when she urged Justice Robert Bromwich to find a date for this hearing as soon as possible.

Justice Bromwich said he has judgments pending in other matters, including where people are in custody, and there are currently three Federal Court judges who haven’t been replaced.

“Your client is a member of the government that has decided, for whatever reason – doubtless there’s many other things on their plate with the pandemic and so on – to not appoint replacement judges to the court,” he said.

“We’re human beings, and we can only do so much. I wouldn’t want to raise that to the level of a complaint as such, so much as pointing out reality. Everyone’s under a lot of stress at the moment.”

Ms Chrysanthou said her client should not be penalised for being a member of parliament before Justice Bromwich interrupted and said “he’s not being penalised”.

“That is a distortion. I think you can withdraw that,” Justice Bromwich said. “I’m simply pointing out the realities – that we have a finite amount of resources to deal with a very large volume of work.”

Nine’s barrister Lyndelle Barnett said the key issues in the defence were Dr Laming’s conduct in relation to taking a photograph, and in “bullying constituents”. She said these would not add significantly to the length of any trial.

Justice Bromwich said he will look in his diary and attempt to find a time for the preliminary hearing later this year or early next year.

The matter will return to court at a later date.

Nine is the publisher of this masthead.