Hundreds of Westminster groups take UK politicians on free trips across the world – but with mounting allegations of heavy drinking, prostitutes and a whiff of corruption, are MPs’ foreign jaunts the next big scandal asks ANDREW PIERCE

Minutes after unpacking his suitcase in a five-star hotel in Asia, the Labour MP had telephoned his wife back at home to boast about the opulent surroundings.

As he waxed lyrical about his luxurious suite, with panoramic views of the South China Sea, there was a knock on the door.

The MP opened it to be greeted by a member of staff holding two pillows.

‘These are the additional pillows you requested, sir,’ he told the bemused MP, who had not asked for them.

As he politely declined the offer, two scantily clad young women appeared giggling by the hotel employee’s side. Which was when the penny dropped.

‘Er, I think there must be some mistake,’ said the MP who was a veteran of overseas trips with fellow Parliamentarians. ‘I am actually on the telephone to my wife. Thank you and good night.’

With that, he closed the door.

Now, having retired as an MP after two decades in the Commons, the individual concerned told me about the incident this week. He said he believed the women had been intended for a colleague who had withdrawn from the trip at short notice and he had been given their room. ‘The order for the girls and the pillows was obviously never cancelled,’ he explained.

It is just one example of an increasingly lurid litany of stories concerning the behaviour of our elected representatives on all-expenses-paid trips abroad.

In the past month there have been disquieting reports of allegations relating to MPs belonging to an All-Party Parliamentary Group (APPG) seeking directions to brothels overseas, meeting sex workers and taking part in ‘marathon’ drinking sessions. 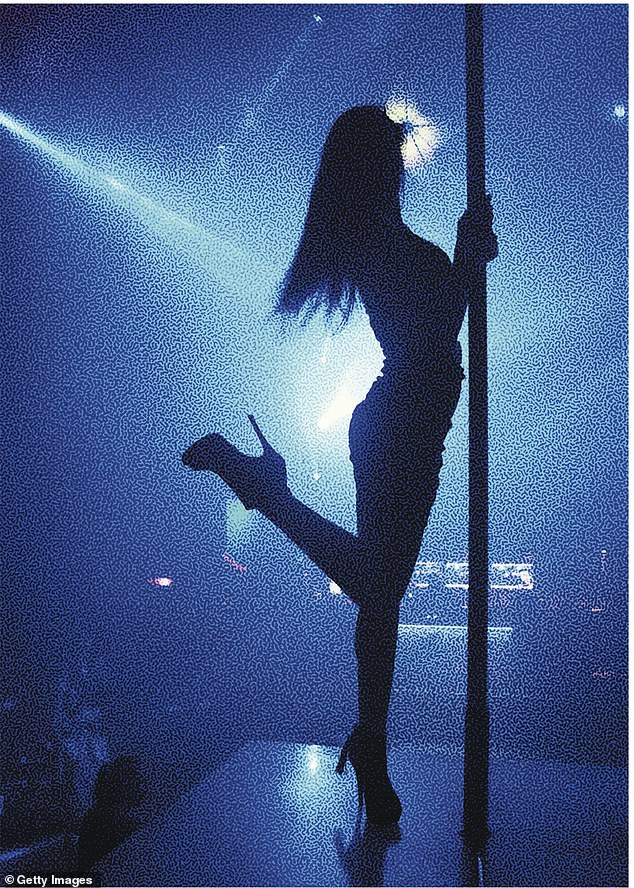 In the past month there have been disquieting reports of allegations relating to MPs belonging to an All-Party Parliamentary Group (APPG) seeking directions to brothels overseas, meeting sex workers and taking part in ‘marathon’ drinking sessions

One Labour MP allegedly propositioned young female interns on an APPG overseas trip last year, which may now lead to an official complaint against him.

The retired MP told me: ‘Some of my former colleagues use the APPGs as freebie holidays with their wives, secretaries and lovers. They don’t have to declare who is on the trip as taxpayer money is not involved.

‘To be fair, not many of them behaved badly — but enough to cause a problem for Parliament if the truth came out. I can remember a trip to France after the 2015 election when a group of MPs ran up a bar bill of £3,000. I’m certain there was no hanky panky, as most of them could barely stand up.’

A taxi bill was queried by an APPG secretariat, which noticed the name of the Cica Cica Boom strip club in Rome on the receipt. My source insists there was a legitimate explanation.

‘The club sponsored a number of taxi firms. I can assure you none of us went to the strip bar,’ he said.

All-Party Parliamentary Groups are informal collectives of MPs which rely on outside money — they get none from the taxpayer — for their ‘work’ on all manner of causes, from capital punishment (abolished in Britain in 1969) to bingo, wrestling and artificial intelligence.

In contrast to the much-feared, publicly funded All-Party Select Committees of MPs — which can order anyone from the Prime Minister down to appear before them — they have no legislative power and do not have to follow the Government’s agenda.

While some do perform valuable services, it appears that they can also be used for jolly gatherings and trips abroad. At the latest count there were 755 APPGs, a higher number than there are MPs (650). And more than 140 are known as ‘country groups’, representing individual countries which cover most of the world. 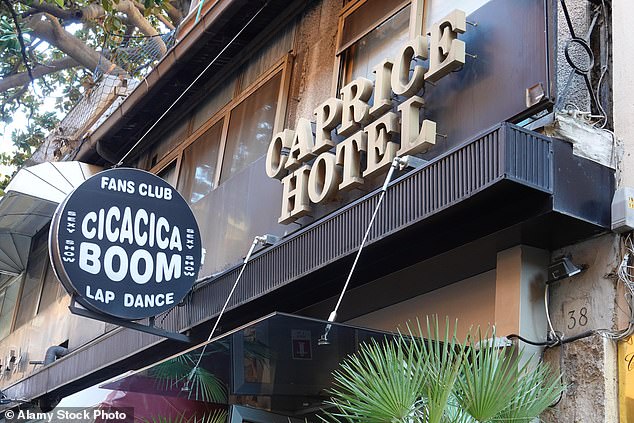 A taxi bill was queried by an APPG secretariat, which noticed the name of the Cica Cica Boom strip club (pictured) in Rome on the receipt

Members of these groups regularly travel to their chosen country, whose government is often happy to pay for them to do so.

Other means of financing the overseas trips include the lobbying industry. Indeed, some of the secretariats which look after APPGs are paid for by commercial lobbying companies — some of which have been accused of wielding undue influence.

House of Commons Speaker Sir Lindsay Hoyle, has warned that lobbyists, rather than MPs, are proposing the establishment of new APPGs.

Sir Chris Bryant, chairman of the Commons Standards committee which is investigating APPGs, has warned of the danger of money appearing to set the agenda.

Lord Pickles, the government-appointed chair of the Advisory Committee on Business Appointments — which advises former ministers on the rules around taking up lucrative jobs after they have left office — believes the groups have a serious problem that needs fixing.

‘These groups have the potential to be the next big scandal,’ he argues. ‘We have to do something now. The behaviour of some MPs on overseas trips has been inappropriate and embarrassing.

‘But it should not be conflated with the seriousness of the potential for financial irregularity. Most of these committees do good work. But it has to be clear when they produce reports that they are representing the views of MPs, not the clients of the lobbyists who pay for the work. We need more transparency — and fast.’

The APPG on obesity, for example, received around £180,000 in donations from 2019 to 2021 from three healthcare firms which make or promote gastric bands or drugs used in obesity surgery and treatment: Johnson & Johnson, Medtronic and Novo Nordisk.

In the past year the Beer Group APPG received £70,000 in donations from firms such as Budweiser, Carlsberg and Diageo, one of Britain’s biggest drinks’ companies.

Some MPs are members of as many as 40 or 50 APPGs and it is likely they will fiercely resist any attempt to curb the number of overseas trips they make. ‘It’s a rather nice perk,’ admitted one Tory MP yesterday.

David Morris, Tory MP for Morecambe and Lunesdale, is so well travelled he has been dubbed ‘Air Miles’ Morris by colleagues.

In 2018, the MP took his parliamentary assistant, Emma Smith, whom he has since married, on a £9,000 six-day trip to the Maldives. The junket was paid for by the Maldives Election Commission to enable the couple to join a team monitoring the country’s presidential election.

That year they also visited Turkey to meet with business people, politicians and visit a refugee camp; Azerbaijan to observe the presidential election of authoritarian leader Ilham Aliyev; while also cramming in visits to Gibraltar and Armenia. They spent 31 days out of the country at a cost of £21,563. One of the most popular countries on the ‘freebie’ list is Gibraltar, a British Overseas Territory since 1713. It was there in November 2021 that a group of MPs including the SNP’s David Linden and Drew Hendry were accused by Defence Secretary Ben Wallace of showing a ‘lack of respect’ after an allegedly ‘drunken’ display in the run-up to Armistice Day. Linden and Hendry have both denied the claims.

Labour MP Charlotte Nichols apparently had to be taken out of the airport in a wheelchair after appearing to get ‘drunk’ on the flight to the Rock. She blamed a reaction to medication. Tory MP Christian Wakeford, who has since defected to Labour, was also accused of ‘excessive’ drinking. 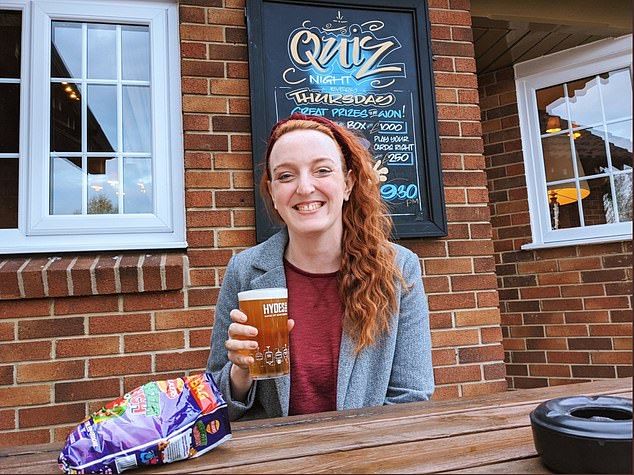 While the trip was not organised by the Gibraltar APPG, one source in the Gibraltar government — in relation to visits generally — said: ‘I dread visits by MPs. Some drink so much they get legless and then are incapable of attending official events. Some of my colleagues have taken to describing the trips as ‘GBboozy’.’

A report by the Open Democracy media organisation estimated that APPGs have received benefits worth around £25 million from outside bodies since 2018 with more than half of them coming from private sector organisations.

PR firm Connect Communications, run by former Labour MP Andy Sawford, even provides courses for clients on how to identify MPs to sit on an APPG and how to secure media coverage for the committee’s work.

But it’s not just stories of bad behaviour abroad and potential lobbying scandals which is causing concern. There are also legitimate security issues about the groups being hijacked by bodies hostile to Britain.

Last year Sir Lindsay Hoyle cited a warning from British intelligence services naming Christine Lee, a 58-year-old Anglo-Chinese lawyer, as a suspected Chinese agent. In an email, Hoyle said Lee had been engaged in ‘political interference activities on behalf of the Chinese Communist Party engaging with MPs in Parliament and a now defunct All-Party Parliamentary Group called Chinese In Britain’.

Gardiner, who held the shadow Cabinet International Trade portfolio when Jeremy Corbyn was Labour leader, used most of the money for staff costs, including hiring Christine Lee’s son as a diary manager.

He later denied being used as a ‘useful idiot’ by China.

Andrew Mitchell, the Minister of State for International Development, was a member of the discredited Chinese APPG between 2016-17, as was Nadhim Zahawi, who is now chairman of the Conservative Party.

Supporters of the ‘country APPGs’ argue that they play a valuable role in building links abroad. But Alison Giles, parliament’s director of security, told the Commons standards committee last year she feared they were ‘particularly attractive routes of access to parliamentarians’. 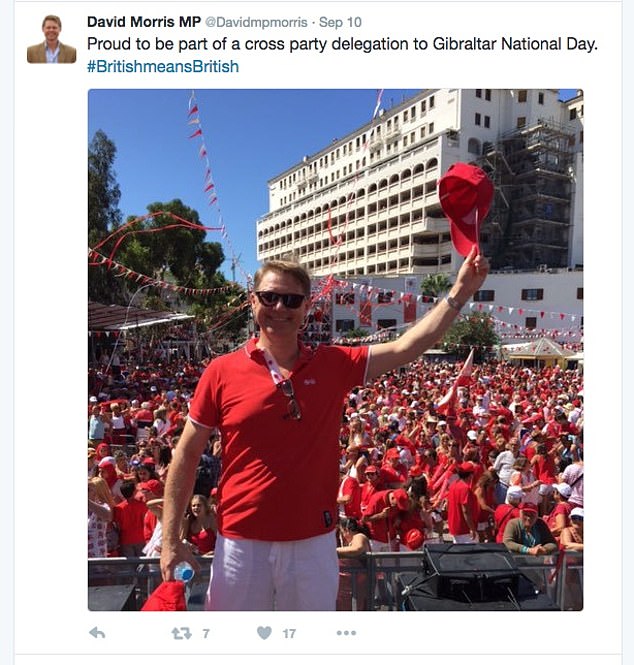 David Morris (pictured), Tory MP for Morecambe and Lunesdale, is so well travelled he has been dubbed ‘Air Miles’ Morris by colleagues

She said many all-party groups ‘will be actively looking for the kind of support that foreign entities and governments would be only too pleased to provide’, including ‘a secretariat that might influence the agenda, funding for foreign visits and guest speakers’.

Take, for instance the Qatar APPG, chaired by former Welsh Secretary Alun Cairns. It received £220,000 in donations to cover trips to the Middle East state between October 2021 and February 2022, money that was provided by the Qatari foreign ministry.

The Qataris, of course, denied lavishing the money on MPs to try to buy their silence over the country’s ban on homosexuality and appalling human rights record in the run-up to last year’s World Cup.

As more criticism emerges of the APPGs, the Standards committee will soon publish a report with a series of sweeping recommendations designed to stamp out any potential abuses by foreign powers and commercial lobbyists.

Committee chairman Sir Chris Bryant says: ‘All-Party Parliamentary Groups are useful, but they must never be a backdoor means of peddling influence around the corridors of power or pursuing a commercial interest.’

Nor should they be a means for MPs to cavort with prostitutes and drink to excess — all at someone else’s expense.

‘Next Door’ Review: Daniel Brühl Plays Himself, Sort of, in His Directorial Debut