The notice, distributed by a customs clearance agent on Tuesday, has not been confirmed by the Chinese government, but its publication was enough to send shares in ASX-listed copper miner Sandfire Resources falling by 8 per cent. 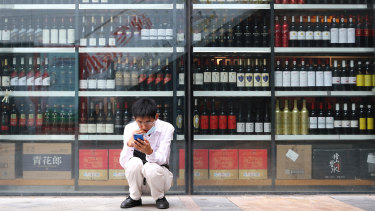 A man sits in front of a wine shop that sells Australian wines in eastern Beijing’s Tongzhou district. Credit:Sanghee Liu

Some Australian wine exporters have been notified by Chinese importers that Australian wine will not be cleared through Chinese customs from this Friday onwards. Australia exports $1.2 billion of wine to China each year.

Tony Battaglene, chief executive of wine industry group Australian Grape and Wine, said the message was going right across the industry to exporters of all sizes.

"There’s a very consistent message coming out, which is that Friday is D-day, and it’s not just about wine it’s about a whole lot of products," he said.

“The message that we’re hearing is that as of Friday product will not be cleared through customs. So any product arriving before will be okay, but if it arrives after Friday then you won’t be cleared, and essentially the border will be stopped."

The November 6 deadline, if enforced, will be a major escalation in Australia's trade dispute with China. More than 20 tonnes of live lobster, feared dead, are still stuck on the tarmac in airplanes at Shanghai Pudong airport, where they have been since Friday undergoing tests for elevated metal levels.

Victorian Rock Lobster Association president Markus Nolle said rock lobster fishing businesses were watching nervously for the latest developments in China. Up to 95 per cent of lobsters from Victoria are sent to China.

“People have just come out of a pretty bad time with the COVID restrictions going back to January,” he said. “It hasn’t been a good year. If they don’t have enough certainty to go fishing they’ll have to tie up the boat and do something else to generate an income.”

Queensland timber logs have also been banned after tree-destroying bark beetles were allegedly found in a shipment along with barley from Emerald Grain Australia. The claims have been strongly denied by Australian exporters.

The trade dispute followed Australia's push for an inquiry into the origins of the coronavirus in April but has continued to intensify after Beijing imposed new national security laws on Hong Kong and advanced its territorial claims on the South China Sea.

The Chinese Foreign Ministry has denied it is ratcheting up economic pressure to win diplomatic concessions. 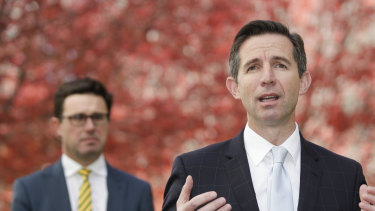 Australia exports more than $1.6 billion in copper each year to China but demand for the ore was expected to surge with increases in renewable energy technology.

Sandfire, which sends up to 90 per cent of its copper from one of its major mines to China each year, said it was maintaining regular contact with its key customers around the world.

"Should it be required, Sandfire is confident in its ability to increase sales contract volumes to existing and also new copper concentrate customers in non-Chinese markets," it said in a statement.

S&P Platts, the global ratings agency's commodities information platform, reported in September that state-owned energy providers and steel mills had been instructed to stop importing Australian coal as they hit their annual quotas.

The delays have forced ships to find other markets for the $14 billion export industry.

China removed tariffs of 35 per cent on international sugar imports in May, giving Australian farmers relief from years of restricted trade. The $2 billion local industry had been hobbled by the trade barriers, limiting its exports to China to $100 million a year.

Paris Hilton Supports Aunt Kyle Richards at Fashion Show on RHOBH: 'It Means the World to Me'

What This 'Saturday Night Live' Star Says About Quitting Twitter

Queen Elizabeth, 93, Declares ‘My Family And I’ Are ‘Ready To Play Our Part’ In Crisis Amid Self-Isolation