Ben & Jerry’s widely criticised ‘to do list’ on Twitter for new Home Secretary Suella Braverman is the latest in a series of politicised stunts the company has aired over social media.

The ice cream firm waded into party politics yesterday by publishing a list of six ‘to do items’ directed at Ms Braverman on its UK Twitter account, with ‘scrap the Rwanda plan’ at the top.

The list, issued on the new Home Secretary’s first day in office, prompted a backlash online from users who accused the firm of ‘virtue signalling’.

TSmlion wrote: ‘Isn’t your to do list to sell ice cream? If you want to do politics shut your shops and start a political party.’

Arman Tamzerian posted: ‘To do list for Suella today: Pay absolutely zero attention to a publicity seeking ice cream maker who have no right whatsoever to try and dictate UK immigration policy.’

Still others accused the firm of hypocrisy, pointing to Ben & Jerry’s continuing business in Russia despite its invasion of Ukraine – as well as alleged exploitation of workers in poor countries by its parent company Unilever. 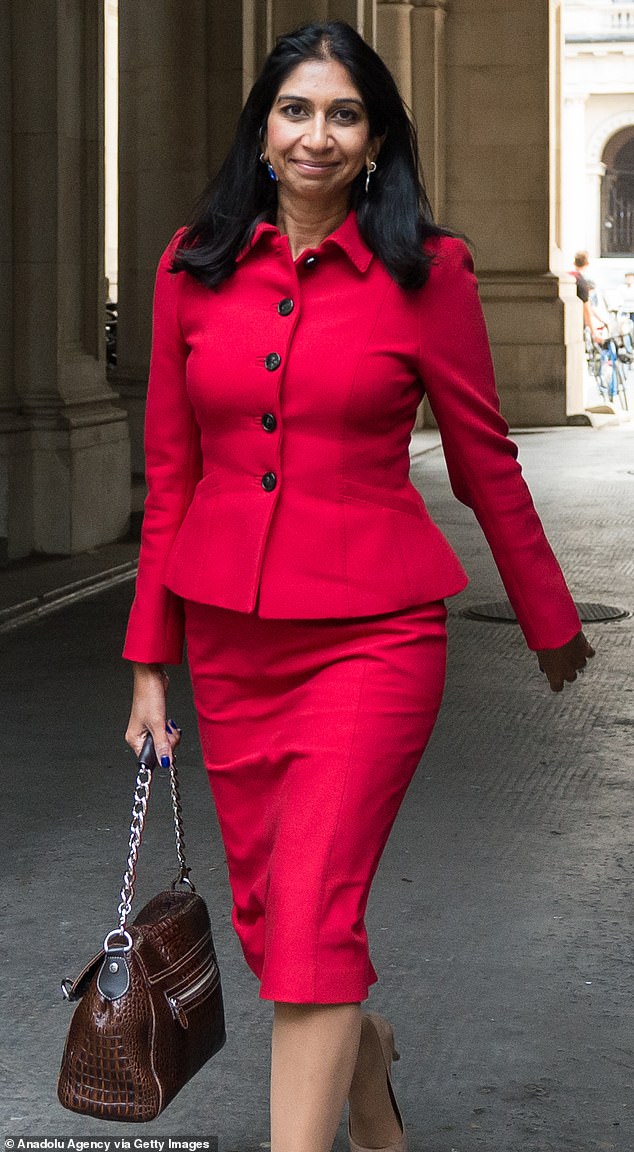 Ice cream company Ben & Jerry’s has been criticised for creating a ‘to do list’ for new Home Secretary Suella Braverman. Pictured, Ms Braverman on her first full day in the role 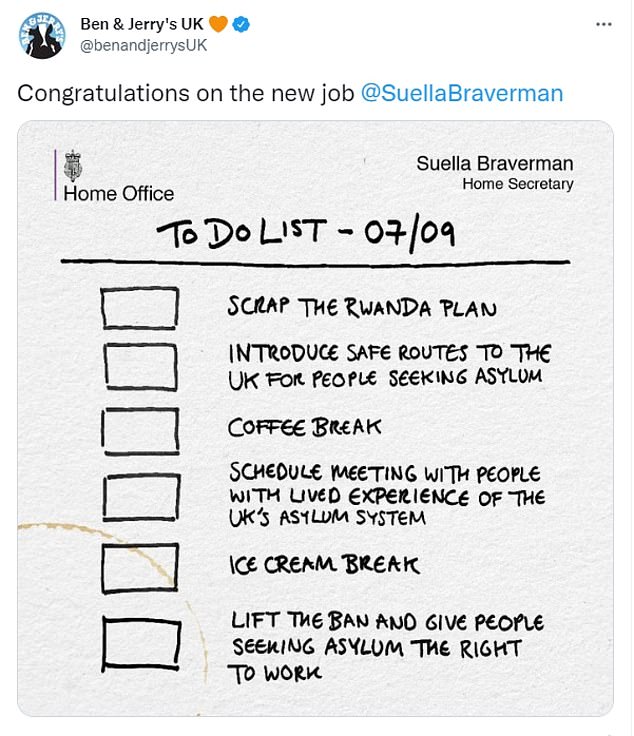 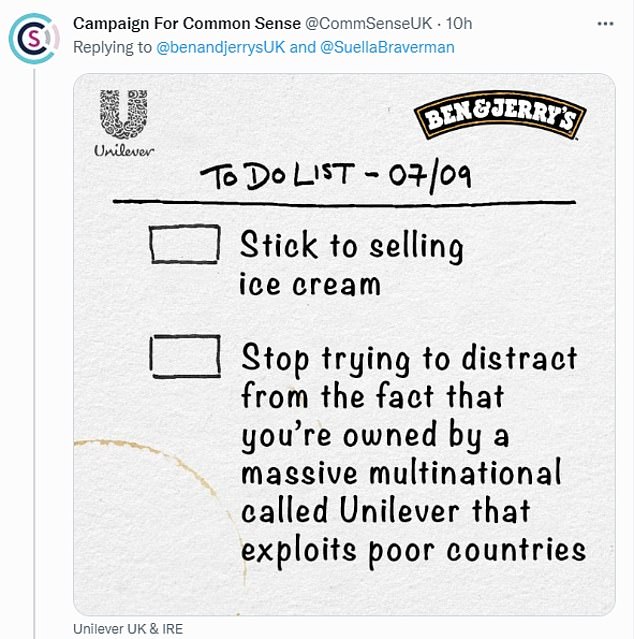 In response, the Campaign For Common Sense created a ‘to do list’ for Ben & Jerry’s telling them to ‘stick to making ice cream’

Ben & Jerry’s previous forays into politics  include a tweet to US President Jo Biden on February 4, telling him ‘de-escalate tensions and work for peace rather than prepare for war’ in Ukraine. Weeks later, the country was invaded by Russia.

In May, it was announced Ben & Jerry’s had pulled out of selling ice cream on Israeli settlements on the West Bank. At the same time, the firm was continuing to sell in Russia and investing $112million to expand a factory in China – condemned for human rights abuses of Uyghur Muslims.

The move sparked a backlash against parent company Unilever, including divestments by pension funds and accusations of anti-Semitism by some Jewish groups – leading Unilever to reverse the decision, which Ben & Jerry’s has vowed to challenge in court.

The ice cream brand has repeatedly criticised the UK Government’s policy on channel migrants, tweeting in June that ‘the real crisis is our lack of humanity for people fleeing war, climate change and torture’.

She had also been told by the brand to ‘schedule a meeting with people with lived experience of the UK’s asylum system’.

In response, the Campaign For Common Sense created a ‘to do list’ for Ben & Jerry’s.

It had two tasks, ‘stick to selling ice cream’, and ‘stop trying to distract from the fact that you’re owned by a massive multinational called Unilever that exploits poor countries’.

Ben & Jerry’s parent company Unilever, which also owns Hellman’s, PG Tips and Dove soap, has received criticism in the past for its practices in third world countries.

In 2019, Unilever workers at the Indonsa plant in Durban, South Africa, staged a peaceful strike and were met by the firm’s private security contractors who allegedly sprayed them with pepper spray, Ethical Consumer reports.

The details emerged in an article produced by the South African Food and Allied Workers Union (FWAU). 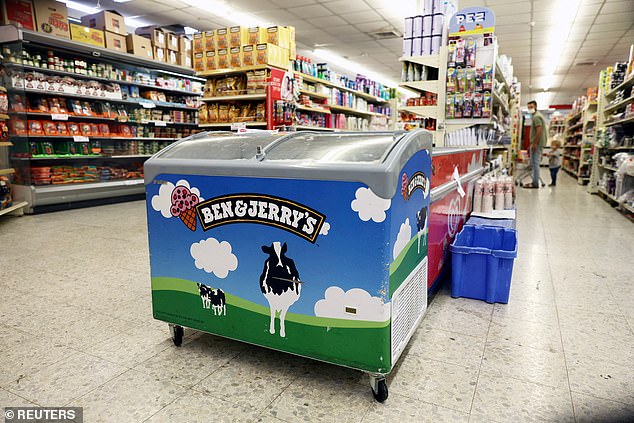 The union wrote: ‘More than 600 FAWU members embarked on a legal strike on 11 February [2019] in demand of a housing allowance and profit-sharing scheme after the parties have been going back and forth over these issues during negotiations over the past five years.

‘Private securities calling themselves “S.W.A.T.”, who were hired by the company two weeks before the strike, invaded the picketing area… and summarily unleashed a torrent of rubber bullets on innocent workers while they were demonstrating peacefully.

‘When female members questioned why they were shooting at them, the security guards continued blasting them with pepper spray.’

Back at home, politicians are calling on the confectioner to stick to what it does best.

‘If you want to buy some ice cream you go to an ice cream company, if you want public policy you don’t,’ Tory MP John Hayes said, the Telegraph reported.

James Cleverly, the new Foreign Secretary, has previously condemned the brand for ‘statistically inaccurate virtue signalling’ following a tweet in 2020 that addressed migrants crossing the Channel on small boats.

The company had tweeted to Priti Patel, then home secretary, stating: ‘People wouldn’t make dangerous journeys if they had any other choice. The UK hasn’t resettled any refugees since March, but wars and violence continue. What we need is more safe and legal routes.’

Ben & Jerry’s has been approached by MailOnline for comment.

Who are Ben and Jerry? Self-proclaimed hippies who started one of the world’s most recognizable ice cream brands before selling out to Unilever 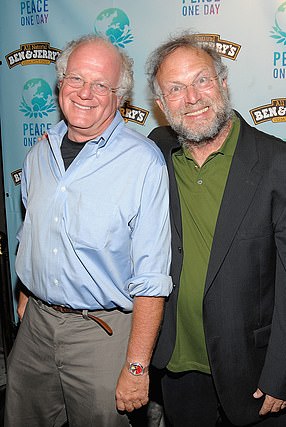 Cohen was born in Brooklyn, New York, and raised in the town of Merrick, on Long Island. Cohen first met and befriended his future business partner Jerry Greenfield in a seventh grade gym class in 1963. In his senior year, Cohen found work as an ice cream man before leaving to attend Colgate University in Hamilton, New York.

Over the next decade, Cohen pursued his interest in pottery and dropped out of college after his sophomore year. He also worked as McDonald’s cashier, Pinkerton guard, deliverer of pottery wheels, mop-boy at Jamesway and Friendly’s, assistant superintendent, ER clerk, and taxi driver, before settling on work as a craft teacher at a private school for emotionally-disturbed adolescents. While teaching at the Highland Community School, Cohen began experimenting with making his own ice cream.

Greenfield grew up on Long Island and attended Merrick Avenue Junior High School, where he met Ben Cohen in 1963. Greenfield and Cohen both attended Calhoun High School and remained friends until they both graduated and left Long Island to attend college. Greenfield chose to pursue a pre-med curriculum at Oberlin College. At Oberlin, Greenfield began working as an ice cream scooper in the school’s cafeteria.

Greenfield lived with Cohen in Saratoga Springs, New York during the summer of 1977. They decided to go into business with each other in May 1978, the two men opened Ben & Jerry’s Homemade Ice Cream Parlor in Burlington, Vermont. They initially intended to start a bagel business, but found the equipment costs prohibitive and switched to ice cream instead.

They chose Burlington as a location because it was a prominent college town which, at the time, had no ice cream shop. They took a five-dollar correspondence course in ice-cream making and opened their first store in a former gas station. Ben & Jerry’s opened in the summer of 1978.

Ben & Jerry’s distinctive style of ice cream was developed to compensate for Cohen’s anosmia, as he kept adding larger and larger chunks to the ice cream to satisfy his need for texture in food. Ben & Jerry’s became popular in Burlington.

Ben & Jerry’s was sold to Marmite and Dove soap maker Unilever for $325million in 2000. Reports indicate that Greenfield pocketed $9.5million while Cohen took away $41million.

Both Cohen and Greenfield are still paid to represent the brand, though neither has formal responsibilities.

Speaking in 2015, Greenfield said: ‘Oh yes, I’m definitely an ageing hippy. Many people think the hippies were irresponsible but we really believed in all that stuff about peace and love and caring for each other; we still do. And we still try to make a difference.’

He added: ‘Ben & Jerry’s continues to have an anti-corporatist and anti-authoritarian outlook on all the big issues we care about, such as climate change and social values, and remains outspoken when it’s important.’

Cohen turned his new-found wealth and prominence toward a variety of social causes, generally through the Ben & Jerry’s Foundation. The Foundation receives 7.5 per cent of all Ben & Jerry’s pre-tax profits and distributes funds to organizations such as the Anti Displacement Project.

Cohen debuted a special ice cream flavor called ‘Bernie’s Yearning’ on January 25, 2016 out of support for Sanders. Ben & Jerry’s released a statement disavowing connection or support for the product.

On April 18, 2016, Cohen was arrested, with Greenfield, while at a Democracy Awakening protest in Washington, DC. On February 21, 2019, Cohen was named a national co-chair of Bernie Sanders’ 2020 campaign.

In 2018, in protest against the Trump administration, the company rebranded one of its flavors Pecan Resist ahead of the midterm elections.  The company said Pecan Resist celebrated activists who were resisting oppression, harmful environmental practices and injustice. As part of the campaign, Ben & Jerry’s said it was giving $25,000 each to four activist entities.

In the wake of George Floyd’s killing, in June 2020, the brand spoke out in support of the Black Lives Matter movement after a wave of protests. It encouraged people to ‘tackle systemic and institutionalized racism’, and said: ‘All lives do matter. But all lives will not matter until black lives matter.’

A few weeks later, Ben & Jerry’s joined other global brands in pulling advertising from Facebook as part of the ‘Stop hate for profit’ campaign, and urged the social network to impose stricter measures on hate speech.

In August, the company faced a boycott in the UK and was slammed for ‘virtue signaling’ after it hit out at Home Secretary Priti Patel over her treatment of migrants crossing the English Channel.

In September 2020, the brand launched a podcast about American white supremacy, titled Who We Are: a Chronicle of Racism in America.

Android 11: You might have to wait even longer to see its best new features

What Will Happen to Dolce & Gabbana Following Their Controversy in China?