Victoria’s Office of Public Prosecutions is considering spilling its specialist sex offence lawyers into a general pool of solicitors amid a High Court case over a $435,000 payout to a former sex crimes prosecutor who suffered trauma from the work.

The proposal is already causing controversy within the OPP. 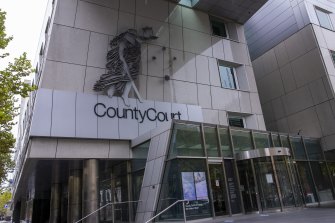 Most of the sexual offence trials brought by the state’s Office of Public Prosecutions are tested in the County Court.Credit:Wayne Taylor

Some lawyers say the move is a mistake and will mean sex crime victims lose specialist prosecutors, but the OPP says the change will not impact the expertise offered to complainants and was about managing the wellbeing and workload of staff.

The proposal to disperse the 13 solicitors in the specialist sexual offences unit comes as one of their former lawyers, Zagi Kozarov, has taken her case to the High Court.

Ms Kozarov, who worked in the unit for more than two years, was granted special leave to appeal a Court of Appeal decision that overturned an initial award of $435,000 in damages to her.

Ms Kozarov was diagnosed with chronic post-traumatic stress disorder and a major depressive disorder after she was repeatedly exposed to sexual offence cases and child exploitation material.

Sexual offences make up about 25 to 30 per cent of the workload within the OPP, but the trials are considered to be among the most intensive.

A source at the office, who was not authorised to speak publicly, said collapsing specialised skills into a generic model was a mistake and that caseloads and staff wellbeing could be dealt with in other ways, such as rotations and regular psychological assistance.

“It’s important that victims receive a specialisation service. Some of the most experienced OPP solicitors work in this space to provide a first-class service to victims,” they said.

“It’s a backwards step, and I’m extremely disappointed to hear this,” Ms Williams said of the proposal.

Ms Williams, who no longer works for the OPP, said a dedicated unit, which once consisted of more than 20 lawyers, meant victims received consistent support and cases were run more efficiently.

But an OPP spokesperson said victims of sexual offences will still have access to specialists.

The unit was not being disbanded, the OPP said in a statement, but the proposal would mean specialist solicitors would be embedded across the whole of the office’s trial practice.

The model under consideration would also include a sexual offences speciality committee, the OPP said.

“The proposed model is part of a wider suite of changes designed to address a number of issues, including increased staff workloads, growing file numbers, [a] COVID-19 backlog and the health and wellbeing of staff,” the OPP said.

The Community and Public Sector Union said there had already been strong resistance from members.

“We need to work through the consultation phase, however, the proposal has instantly drawn the ire of staff and crushed any wellbeing there,” spokesman Julian Kennelly said.