China is willing to shape the international order together with Russia in a ‘more just and rational direction’, a senior Chinese diplomat said as the two countries’ leaders prepare to meet this week.

Former Cold War allies with a tempestuous relationship, China and Russia have drawn closer in recent years as part of what they call a ‘no limits’ relationship acting as a counterweight to the global dominance of the United States.

‘Under the strategic guidance of President Xi Jinping and President (Vladimir) Putin, the relationship between the two countries has always moved forward on the right track,’ the Communist Party’s foreign affairs chief Yang Jiechi told Russia’s ambassador to China Andrey Denisov on Monday, according to a foreign ministry readout. Russia has sought to bolster ties with Asian countries, particularly China, since being hit with unprecedented Western sanctions over its invasion of Ukraine

Yang said China was ‘willing to work with Russia to continuously implement the spirit of high-level strategic cooperation between the two countries, safeguard the common interests of both sides, and promote the development of the international order in a more just and rational direction’, according to the ministry.

Denisov in response praised the ‘fruitful results’ of bilateral relations, the readout said.

Russia has sought to bolster ties with Asian countries, particularly China, since being hit with unprecedented Western sanctions over its invasion of Ukraine.

Heightening tensions between China and the West, Beijing has not condemned Moscow’s interventions in Ukraine, and provided diplomatic cover by blasting Western sanctions and arms sales to Kyiv.

The Russian military announced sweeping military drills in the country’s east that will involve forces from China last week, another show of increasingly close ties between Moscow and Beijing amid tensions with the West over the military action in Ukraine. 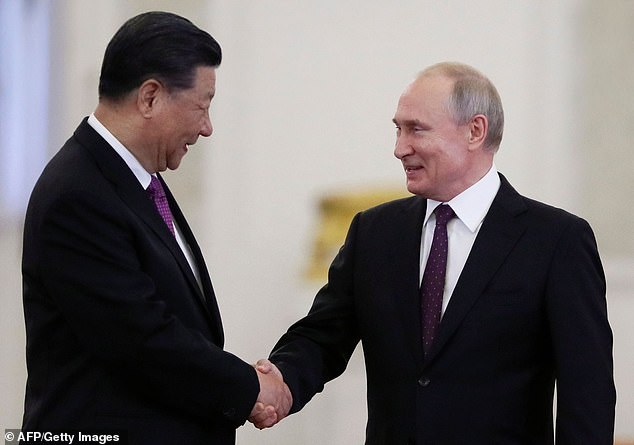 Beijing has not condemned Moscow’s interventions in Ukraine, and provided diplomatic cover by blasting Western sanctions and arms sales to Kyiv

Xi and Putin’s idea of a ‘just world order’ has been crushing dissent and democracy in Taiwan and Hong Kong too.

At least 47 democracy activists, aged 23 to 64, were charged with conspiracy to commit subversion under the Beijing-imposed National Security Law and detained last year over their involvement in an unofficial primary election in 2020 that authorities said was a plot to paralyze Hong Kong’s government. The primary showed strong support for candidates willing to challenge the Beijing-backed local government.

Hong Kong was handed over from British to Chinese rule in 1997 with a pledge that it would retain its own legal, economic and social systems for 50 years.

China also claims Taiwan as its own territory, to be brought under its control by force if necessary. Beijing has also boosted its relations with Russia and is seen as tacitly supporting Moscow’s attack on Ukraine.

China says it plans to annex Taiwan under the ‘one country, two systems’ format applied in Hong Kong, which critics say has been undermined by a sweeping national security law that asserts Beijing’s control over speech and political participation. The concept has been thoroughly rejected in Taiwanese public opinion polls in which respondents have overwhelmingly favored the status-quo of de-facto independence. 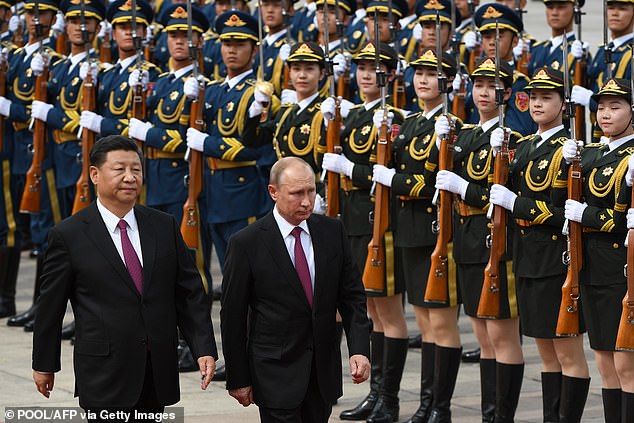 Putin and Xi are set to meet in Uzbekistan this week, on the sidelines of a summit of regional countries 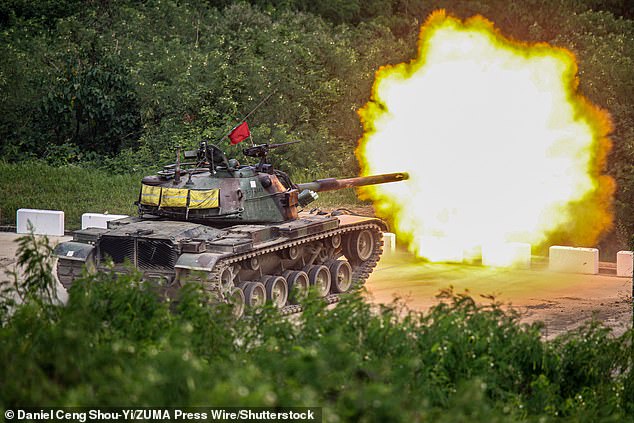 A CM-11 tank fires cannons during the 2-day live-fire drill in Pingtung county, Taiwan, amid intensifying threats military from China

Along with staging the exercises, China cut off contacts with the United States on vital issues, including military matters and crucial climate cooperation, raising concerns over a more aggressive approach by Beijing. It also called in U.S. Ambassador to China Nicholas Burns to formally complain. He later said China was overreacting in order to manufacture a crisis.

Putin and Xi are set to meet in Uzbekistan this week, on the sidelines of a summit of regional countries.

The two leaders will meet at the Shanghai Cooperation Organization summit, held in the Uzbek city of Samarkand on September 15-16.

Putin and Xi last met in Beijing in February, weeks before the Kremlin sent troops into Ukraine. The two presidents oversaw the signing of an agreement pledging that relations between the sides would have ‘no limits.’ It remains unclear whether Xi knew at the time of Russia’s plan to launch what Moscow is calling ‘a special military operation’ in Ukraine.

They are also expected to be at the G20 summit which is due in November in Bali. The US president, Joe Biden, is due to take part too. The Ukrainian president, Volodymyr Zelenskiy, has said he would participate remotely.

The summit will be an opportunity for critical discussions about the Russia’s invasion of Ukraine.

While offering its tacit support for Russia’s campaign in Ukraine, China has sought to appear neutral and avoid possible repercussions from supporting the Russian economy amid international sanctions.

Li on his visit hailed an ‘unprecedented level’ of trust and cooperation between Moscow and Beijing.

Netflix Party: How to host an online Netflix binge with friends

Naya Rivera 'could have been incapacitated before drowning'