Ben Affleck was placed on a ‘red flag list’ by Harvey Weinstein, who feared the actor was speaking to journalists about the disgraced Hollywood producer’s sexual misconduct with women, unsealed court documents have revealed.

The Hollywood star, 47, whose blockbuster hits Good Will Hunting and Shakespeare in Love were released by Weinstein’s former company, Miramax, was among a list of people he thought were spilling the beans, Variety reported after seeing the papers.

The list of names, which were highlighted during Weinstein’s seven week trial at the New York supreme court, found Affleck was among the stars that he thought might become an informant in 2017 as he was hit by the storm of sexual abuse allegations. 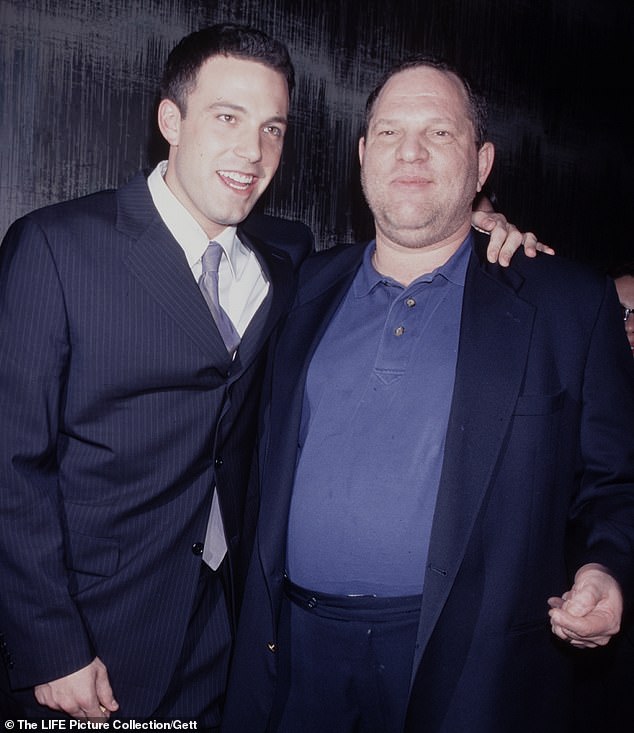 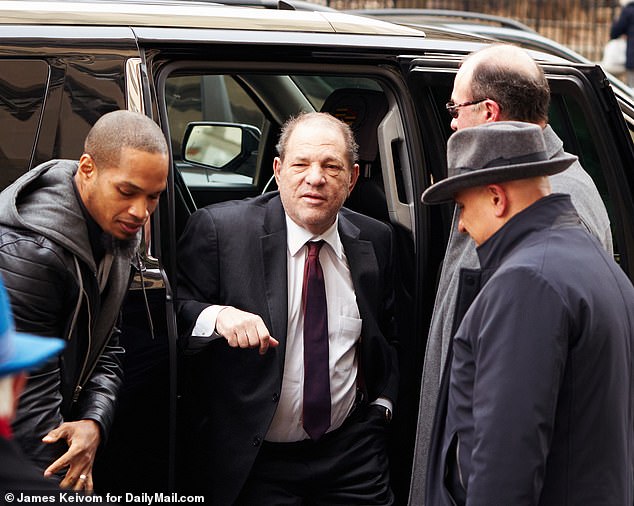 Affleck’s representatives are still to respond to the court documents unearthed by Variety.

During the former producer’s trial, the court heard how Weinstein hired a private investigator to look into the people on the ‘red flag list’ and wrote in an email: ‘The red flags are the first to call.’

The unearthed list comes after it was revealed the disgraced Hollywood mogul had planned to open a female-led addiction center run to help revive his reputation amid rape and sexual assault allegations.

Unsealed court documents revealed Weinstein had drafted plans for the facility in the fall of 2017 however these were later scrapped by Weinstein’s team of PR advisers.

Yesterday court documents also revealed that Weinstein had said actress Jennifer Aniston ‘should be killed’ after he learned that the National Enquirer was planning to run a story accusing him of groping her.

In an email thread, unsealed by the Manhattan Supreme Court ahead of Weinstein’s sentencing on Wednesday,  the former producer was forwarded a note from the Enquirer about a report that he had groped Aniston at a premiere event.

Weinstein responded to the note by writing: ‘Jen Aniston should be killed.’ 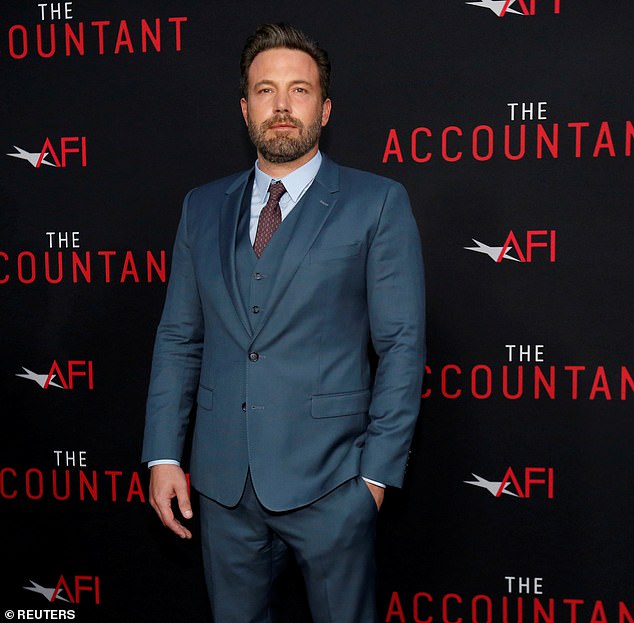 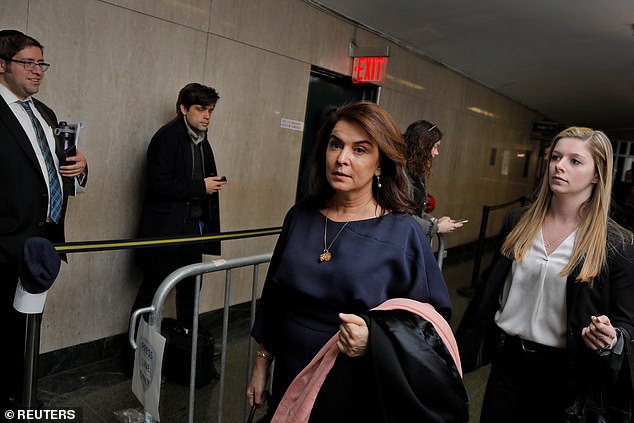 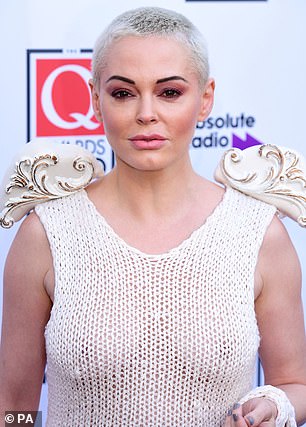 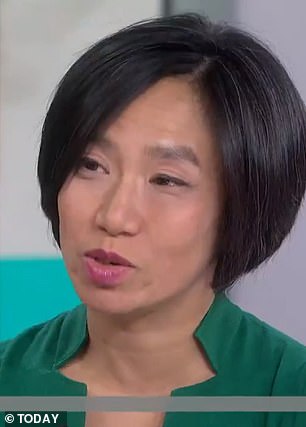 Also named on the list, which was released in unsealed court documents, was actress Rose McGowan (left) and Rowena Chiu (right)

In 2017, during an interview on NBC’s Today show, Affleck admitted that he had known about the film producer’s alleged inappropriate behavior and knew ‘he was sleazy’.

Admitting that the case had made him re-evaluate his own actions, he said: ‘I knew he was sleazy and a bully, but unfortunately that wasn’t that uncommon.

‘I was brand new to Hollywood; I was 24 years old; I had never made a movie. I didn’t know much of anything.’

The Justice League star, who finally broke his silence over the sexual harassment and assault allegations facing Weinstein in October 2017, also said he was ‘saddened and angry’ over the claims.

He also shared a message on social media which read: ‘I am saddened and angry that a man who I worked with used his position of power to intimidate, sexually harass and manipulate many women over decades.

‘The additional allegations of assault that I read this morning made me sick. This is completely unacceptable, and I find myself asking what I can do to make sure this doesn’t happen to others.

‘We need to do better at protecting our sisters, friends, co-workers and daughters. We must support those who come forward, condemn this type of behavior when we see it and help ensure there are more women in positions of power.’

However former Charmed star Rose McGowan, who was allegedly assaulted by Weinstein in 1997, slammed Affleck and called him a ‘liar’.

She tweeted: ‘@benaffleck “GODD*MNIT! I TOLD HIM TO STOP DOING THAT” you said that to my face. The press conf I was made to go to after assault. You lie.’

Affleck did not respond to requests for further comment. 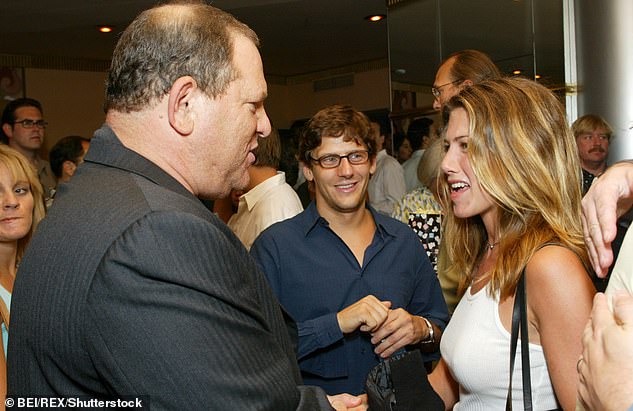 In the unsealed court documents, the former producer said the actress ‘should be killed’

The latest revelations come as Weinstein prepares to head back to court on Wednesday for the final act of the rape trial that landed him behind bars.

Weinstein is scheduled to be sentenced in New York City and faces a minimum of five years and a maximum of 29 years in prison for raping an aspiring actress in 2013 and forcibly performing oral sex on a TV and film production assistant in 2006.

A second criminal case is pending in California.

Both women that Weinstein was convicted of assaulting are expected to be in court to give victim impact statements before he is sentenced.

Weinstein will also have a chance to speak. He opted not to testify at his trial, but at sentencing he won’t have to worry about getting grilled by prosecutors.

Other women who’ve accused Weinstein – including some who testified at his trial – are not permitted to speak at his sentencing under state law.

One of those witnesses, Tarale Wulff, who accused Weinstein of raping her in 2005, said in a statement Tuesday that she will still attend and hopes that the sentence ‘sends a clear message that times have changed.’ 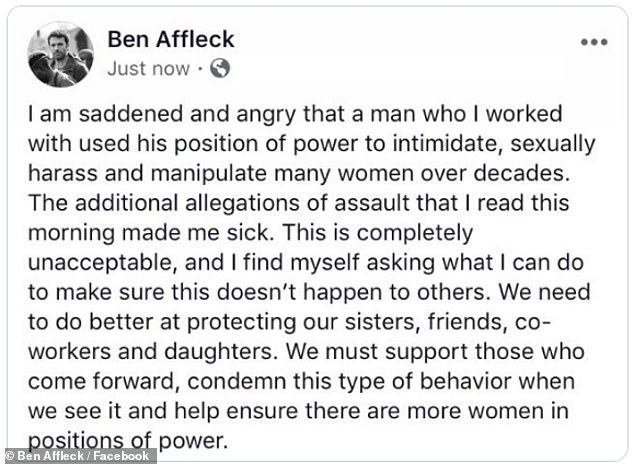 In 2017, Affleck took to social media to condemn Weinstein’s conduct and say it was ‘completely unacceptable’

Weinstein was convicted on two counts: criminal sex act for the 2006 assault on the production assistant and rape in the third degree for a 2013 attack on another woman.

Weinstein was acquitted of first-degree rape and two counts of predatory sexual assault stemming from actress Annabella Sciorra’s allegations of a mid-1990s rape.

He maintains his innocence and contends that any sexual activity was consensual.

Newly unsealed documents show the 67-year-old former film producer sought help from billionaires Jeff Bezos and Michael Bloomberg as sexual misconduct allegations against him piled up in October 2017, and that he considered issuing a statement at the time claiming that he was suicidal.

There is no evidence to suggest either man responded.

The New York case was the first criminal matter against Weinstein to arise from accusations of more than 90 women, including actresses Gwyneth Paltrow, Salma Hayek and Uma Thurman.

Many of Weinstein’s accusers say he used his Hollywood prestige to befriend them, dangling movie roles to gain their trust. 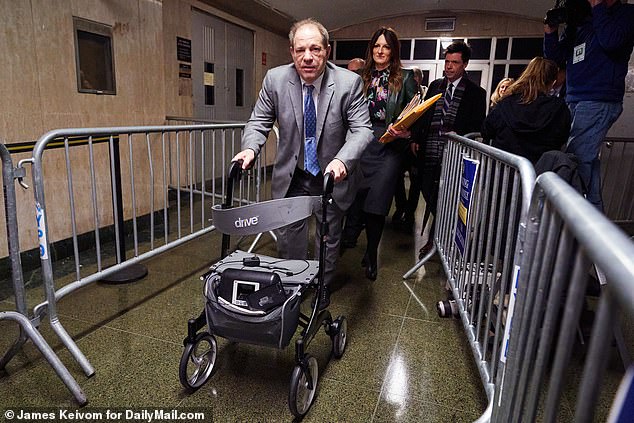 Weinstein’s lawyers are seeking the minimum sentence of five years in prison because of his age and frail health.

Weinstein, who turns 68 next week, used a walker throughout the trial following recent back surgeries. After his February 24 conviction, he split time between a hospital and a jail infirmary unit, and had a stent inserted last week to unblock an artery.

‘Given his age and specific medical risk factors, any additional term of imprisonment above the mandatory minimum – although the grave reality is that Mr. Weinstein may not even outlive that term – is likely to constitute a de facto life sentence,’ Weinstein’s lawyers wrote in a sentencing memorandum filed Monday.

Once Weinstein is sentenced, he’ll be transferred from the city’s jail system to the state prison system. The agency that runs New York’s state prisons said every inmate is evaluated to determine which facility meets his or her security, medical, mental health and other needs.

Martin Horn, the city’s former corrections commissioner, said Weinstein’s celebrity status could make him a target for another inmate looking to make a name for himself, while the gravity of his convictions and sentence could raise suicide concerns.

‘No jail wants to have the next Jeffrey Epstein,’ said Horn, who now teaches at John Jay College of Criminal Justice.

‘They’re going to make sure that nothing happens to him while he’s in their custody. Not because he’s important, but just from a public relations point of view, it would be awfully embarrassing.’

Prosecutors did not ask for a specific number of years in prison in their sentencing memorandum, but said that Weinstein deserves severe punishment to account for allegations dating to the 1970s that didn’t lead to criminal charges. 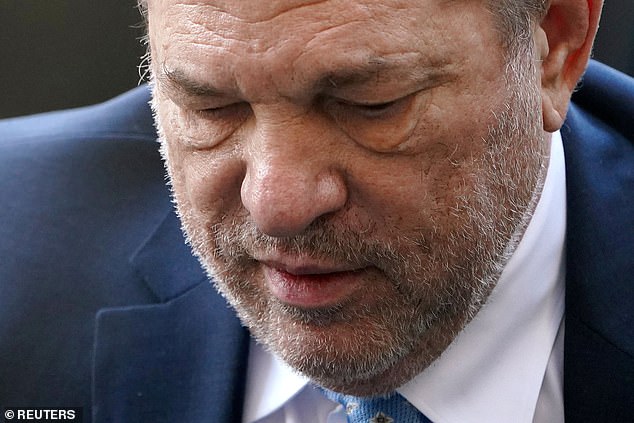 The disgraced star, who now faces 29 years in prison, was charged in California with raping a woman at a Los Angeles hotel on February 18, 2013

In their letter, prosecutors outlined 16 examples they said showed Weinstein ‘trapped women into his exclusive control’ so he could sexually assault them, starting when he was working as a music producer in Buffalo in 1978.

‘One of the underlying principles of the law of punishment is promoting general deterrence,’ Bader said. ‘I think Judge Burke will want to send a message to `would be’ sexual predators that the hammer of the law will come down hard on you if you use your power – physical and otherwise – to manipulate and sexual abuse victims.’

Just as jury selection was about to get under way in the New York case in January, authorities in California announced they were also bringing criminal charges against Weinstein.

Weinstein was charged in California with raping a woman at a Los Angeles hotel on February 18, 2013, after pushing his way inside her room, then sexually assaulting a woman in a Beverly Hills hotel suite the next night.

Fashion hits and misses from the 2020 Academy Awards