England will suffer another drought this summer – and hosepipe bans – unless there is exceptional rainfall in coming months, says the Environment Agency.

Despite recent downpours, most of England is ‘still in drought’, it explains.

Last summer was the driest for 50 years and hosepipe bans were brought in for millions of homes. And latest Met Office figures show December 2022 remained drier than average for the UK.

John Leyland, from the agency, said: ‘We cannot rely on the weather alone – if we are to avoid a worse drought this year, it will require action by us all.’ 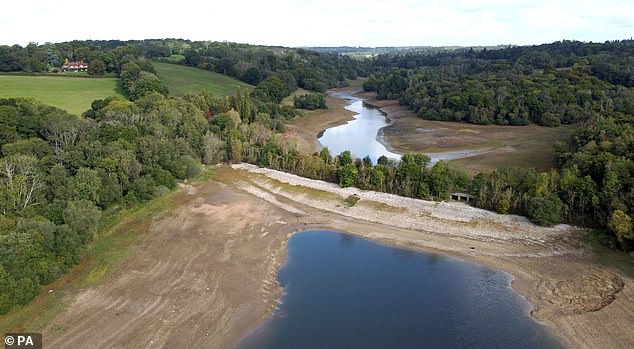 England will suffer another drought this summer unless there is exceptional rainfall in coming months, says the Environment Agency. Pictured: Ardingly reservoir in West Sussex at 30 per cent its normal capacity, September 27, 2022

The UK had 111mm of rain in December, which is 87 per cent of the average.

Forecasts of drought are likely to renew criticisms of water companies who lose a staggering amount of water to leaky pipes – some 3billion litres a day – or just over 1 trillion litres over the year according to Ofwat figures.

The Government has set the industry a target to halve leakage rates by 2050, while Ofwat has set a five-year target of a 16 per cent reduction by 2025.

Meanwhile, demand for water is growing with the National Infrastructure Commission estimating that the UK will need an extra 3.5billion- 4billion litres water a day.

The National Infrastructure Commission has warned ‘without further action there is roughly a one in four chance over the next 30 years that large numbers of households will have their water supply cut off for an extended period because of a severe drought’.

The Climate Change Committee, which advises government, has called for set targets for reducing household and business water use.

Although ministers have said they want water consumption to fall to 110 litres per person per day by 2050, from about 142 litres today, the goal is not legally binding and does not cover businesses, which account for more than a quarter of public water supply needs. 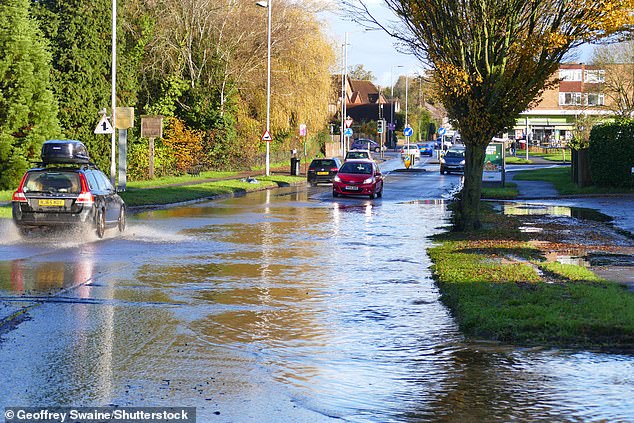 Despite recent downpours, most of England is ‘still in drought’, the Environment Agency explains. Pictured: Vehicles drive through flood waters in Reading, November 23, 2022

A Defra spokesperson said: ‘Protecting our water resources remains a priority for this government. We are already pushing water companies to halve leakage rates and develop new supplies as well as taking action to ensure resilience including investment in new reservoirs.

‘We want to go further, which is why we are proposing a statutory government target on water efficiency through the Environment Act which would require a reduction in leakage of over 30 per cent by 2037.

‘These measures will support the delivery of the ambitions set out in the National Water Resources Framework to reduce personal consumption from 144 litres to 110 litres per person per day by 2050.’

Water UK said its members were ‘increasingly using innovative solutions, such as drones and artificial intelligence, to find and fix leaks as soon as possible’ and said tackling leakage was only ‘part of the solution’.

A Water UK spokesperson said: ‘Leakage is currently at the lowest level on record ever and water companies are increasingly using innovative solutions, such as drones and artificial intelligence, to find and fix leaks as soon as possible. Each company has plans in place to reduce leakage year on year to meet the ambitious sector target of reducing leakage by 50 per cent by 2050.

‘However, leakage is only part of the solution which is why companies are investing billions in new water resources projects, including new reservoirs and major water transfer schemes. In addition, companies are working hard with customers to cut water use and are pushing Government to champion water efficiency through mandatory water efficiency labelling and robust building regulations.’

Pandora fans are showing off their mega hauls as bangles, rings and bracelets are slashed by 50% | The Sun

The Oval Renewed for Season 3