Aerosol cans full of forensically tagged liquid will be used to drench criminals as they attempt to make their escape.

The special liquid stays on skin, clothes and vehicles for three months.

So even if the thugs escape, cops can still have evidence against them.

Staffordshire Police will become the first force to deploy the trumped up water guns this weekend.

Known as SmartTag, cops will target nuisance motorbike and moped riders causing trouble in the countryside of Cannock Chase. 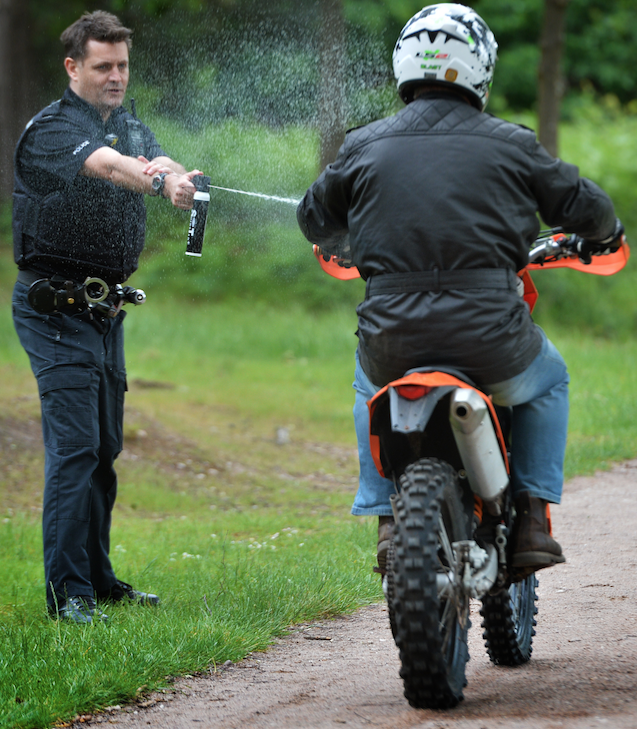 Each SmartTag can has a unique barcode to link the offender to the crime.

The product was officially launched in Cannock Chase today, as creators Telford-based SmartWater, teamed up with Staffordshire Police to provide a demonstration.

It comes as cops around the country try to workout how best to tackle moped and motorbike gangs. 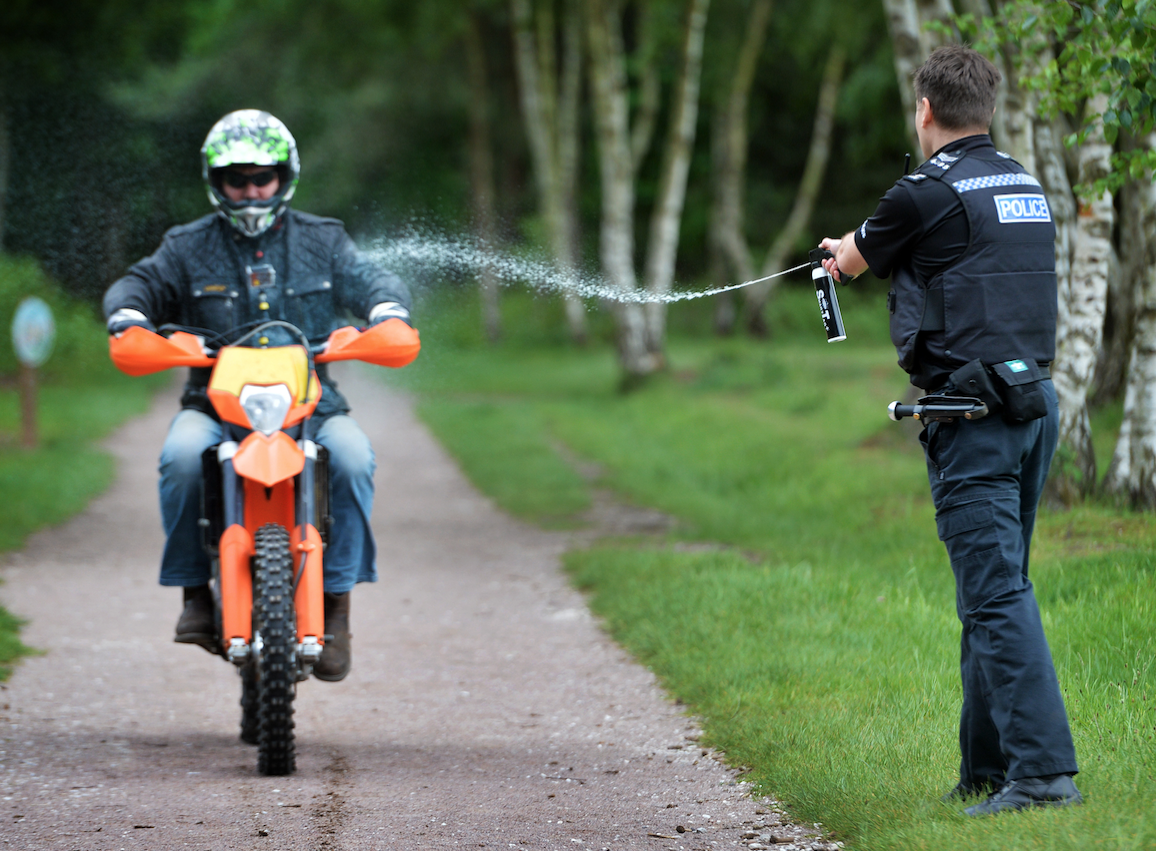 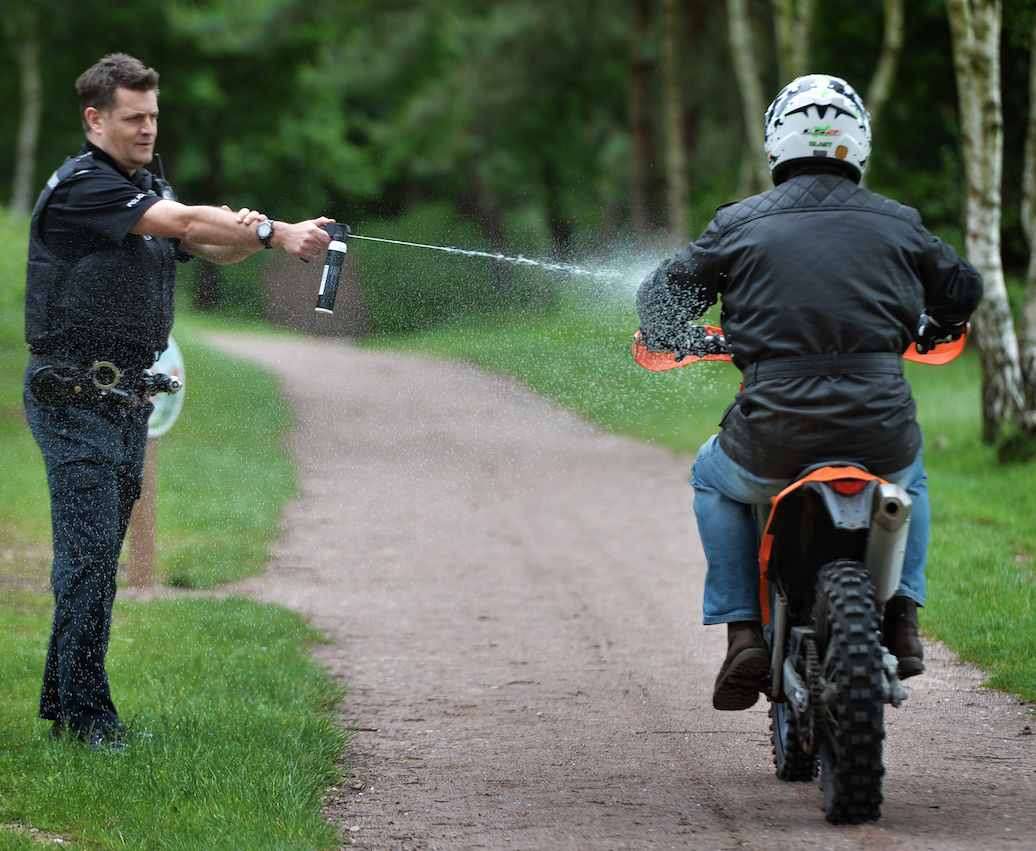 Chief Inspector Sarah Wainwright, commander for the Cannock Chase Neighbourhood Policing Team, said: “We hope this new technology will help us to address an ongoing issue of anti-social behaviour in the Cannock Chase area and send a positive message to the local community that we are doing all we can to address their concerns.

“Last year we had 278 calls about anti-social behaviour relating to motorbikes across this policing area – Cannock.

“If you times that by 10, the number of policing areas across the county, you can see what a problem this is.

“It will help us a lot this summer, including just preventing the crime. As soon as people here we have this they will get their bikes licensed, or checked, or just stop altogether.” 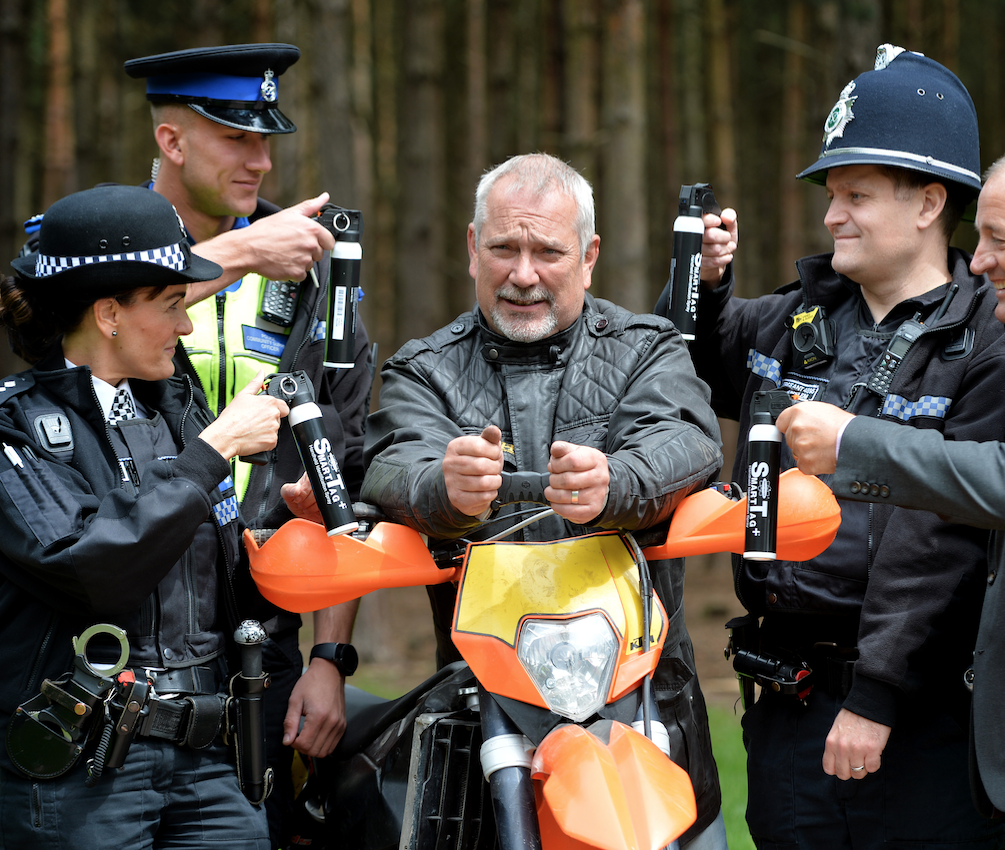 Gary Higgins, consultant director of security services at SmartWater, said: “The cans dispense a spray stream of uniquely coded liquid to accurately, forensically tag offenders up to eight to 10 metres away.

“It is invisible to the naked eye but glows under UV light. The liquid is near impossible to remove and will remain on skin and hair for weeks or months, even with frequent washing.

“SmartTag is ideal for police and law enforcement, allowing for discrete tagging and identification of offenders as well as being used to reduce the risk of attack for ‘at risk’ people, such as security guards, door staff, shopkeepers and hospital staff.

“When an arrest is made, scientists will analyse traces of SmartWater found on the offender to identify the unique forensic code, linking it back to the crime scene or incident.

“Our scientists only require trace the size of a speck of dust to link the offender back to a crime scene.”

Kevin Alejandro children: Does the Lucifer star have any children?