Excessive heat and red flag warnings are in effect for much of California this weekend, as the state battles several blazes amid scorching temperatures.

Record-high temperatures could be set this Labor Day weekend, from San Diego to Los Angeles and up into Sacramento. 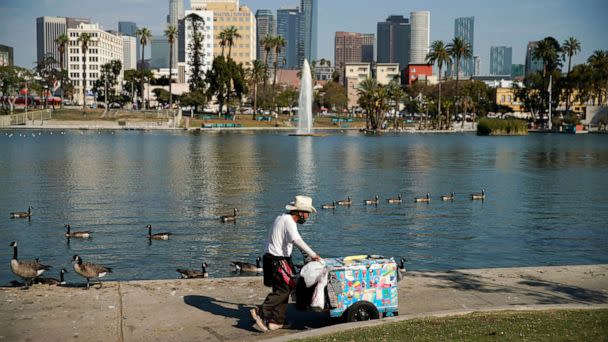 Residents in the state are urged to continue to conserve energy amid a heatwave that has tested the state’s energy grid, with temperatures across the state 10 to 20 degrees hotter than is typical this time of year.

Since Wednesday, “two new fires have started that threaten transmission lines that supply power to millions of homes,” his office said.

Newsom declared a state of emergency on Wednesday due to the high temperatures, to temporarily increase energy production and reduce demand. For the third day in a row, the California Independent System Operator, which operates the state’s power grid, issued an alert on Friday asking residents to reduce their electricity consumption during the late afternoon and evening hours. 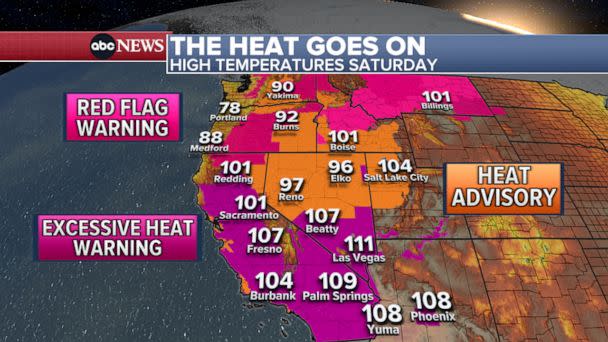 California ISO President Elliot Mainzer said the grid experienced no “serious problems” on Thursday due to energy conservation efforts, as the prolonged heatwave pushed demand to the highest levels since September 2017.

“The hottest weather in this extended heatwave is still ahead of us,” Mainzer said in a video statement Friday. “Much of California will see record triple-digit temperatures with only moderate cooling at night, right through the Labor Day holiday weekend and into the middle of next week. So electricity conservation is going to be essential in keeping the power flowing to California without interruption.”

Amid the soaring temperatures, firefighters are also battling several blazes in California.

One of the newest threats is the Mill Fire in northern California’s Siskiyou County, which has quickly burned nearly 900 acres since starting Friday afternoon amid a red flag warning for the area and poses a danger to structures, powerlines and transmission lines.

Video of the #MillFire burning off of Mill St. in Weed, courtesy of Joshua Phenix. All of Weed is under a MANDATORY EVACUATION ORDER. LEAVE NOW! #cawx#fireseason2022pic.twitter.com/YP7KrfNGOh

Multiple evacuation orders and warnings are in place as Cal Fire warns of a “dangerous rate of spread” for the wildfire.

Among the largest active blazes in the state, the Route Fire has burned more than 5,000 acres in Castaic in Los Angeles County since igniting on Wednesday. It was nearly 40% contained as of Friday morning.

The Border 32 Fire in San Diego County has also burned more than 4,400 acres since Wednesday. It was 20% contained as of Friday morning.

Netflix gets a serious boost on Android, and you should be able to hear the difference now

15 Stars Making The Cheesiest Faces Of All Time

Where to buy the best hot water bottles, including body-length ones