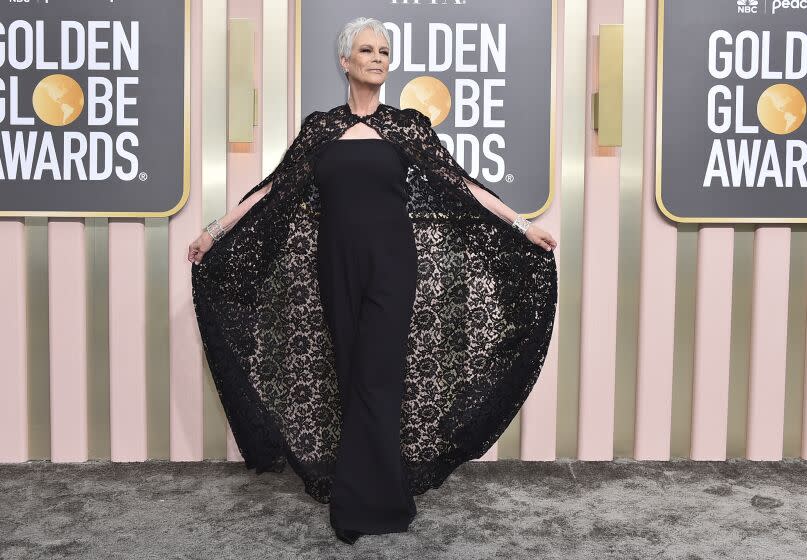 Jamie Lee Curtis has tested positive for COVID-19, sharing her fate just days after attending — and going viral in a whole

The "Everything Everywhere All at Once" star, who became an instant meme when she exuberantly celebrated her co-star Michelle Yeoh's first Golden Globe win during the ceremony, took to social media Friday to reveal her positive diagnosis amid Hollywood's unrelenting awards season engagements.

"F— COVID!" the "Knives Out" star wrote on Instagram. "Sadly, this head cheerleader is not going to be at all the weekend festivities cheering on her friends and colleagues. Life on life's terms."

The 64-year-old scream queen shared an image of several at-home testing kits, noting her gratitude for them nearly three years into the COVID-19 pandemic.

"I'm glad that there are all these home tests available so that I didn't go to the @americanfilminstitute lunch and spread my germs. I was SO looking forward to going to the @bafta tea and the @criticschoice awards as a nominee and member of a motley crew! I'm so proud of these people, and I look forward to cheering them on through my TV set. Stay safe out there people," she wrote.

Exceeding last summer's surge, Los Angeles County has seen an uptick in coronavirus cases, and the number of COVID-19 deaths reported weekly in the county this week has hit the highest point of the season, underscoring the continued risks of the disease.

Curtis was nominated for the supporting actress in a motion picture Golden Globe for her role in the multiverse-hopping “Everything Everywhere All at Once,” but the prize ultimately went Tuesday to "Black Panther: Wakanda Forever" star Angela Bassett. Curtis walked the rain-soaked carpet at the Beverly Hilton in a black Safiyaa jumpsuit and lace Valentino cape and presented an award alongside "30 Rock" alum Tracy Morgan.

She was seated alongside many fellow celebrities in the hotel's crowded International Ballroom for the rebooted award show and cameras caught her throwing her hands in the air with glee when Yeoh won her award. The action shot was quickly immortalized on social media.

"Once a cheerleader. ALWAYS a cheerleader. My Bae won a Golden Globe. Her first nomination and win," she wrote on Instagram, later adding, "I am quite stunned that a moment of pure JOY on Tuesday night is now a T shirt and a movement on Thursday! Proud and humbled and EXCITED! Thanks @erin.gallag.her and all hail @michelleyeoh_official"

Curtis, the daughter of legendary actors Janet Leigh and Tony Curtis, has built a remarkable career since age 19, punctuated by her roles in the cult "Halloween" franchise, action flick "True Lies," heist comedy "A Fish Called Wanda" and role-reversal comedies "Trading Places" and "Freaky Friday." On TV, she starred in "Scream Queens," "Anything But Love" and "Operation Petticoat."

Nonetheless, she was name-checked in New York magazine's inescapable "nepo-babies" Vulture feature last month and took to Instagram to call herself "an OG Nepo Baby" and to defend the children of celebrities.

"[T]here's not a day in my professional life that goes by without my being reminded that I am the daughter of movie stars. The current conversation about nepo babies is just designed to try to diminish and denigrate and hurt," she wrote.

"For the record I have navigated 44 years with the advantages my associated and reflected fame brought me, I don't pretend there aren't any, that try to tell me that I have no value on my own," she continued. "It's curious how we immediately make assumptions and snide remarks that someone related to someone else who is famous in their field for their art, would somehow have no talent whatsoever.

"I have come to learn that is simply not true. … I've tried to bring integrity and professionalism and love and community and art to my work. I am not alone. There are many of us. Dedicated to our craft. Proud of our lineage. Strong in our belief in our right to exist."