Jealous Oliver Price, 18, used the home sex movie ‘as a weapon’ to get back at the victim after she dumped him

Oliver Price, 18, from Droitwich in Worchestershire, threatened to ‘make her life a living hell’ after she dumped him.

In a separate incident, he also battered a man with a metal pole and threatened to head butt a police officer who was arresting him.

The court heard he also had a string of previous convictions, including ABH, four offences of battery and arson.

He was sentenced to 12 months prison, suspended for 18 months, handed a community order and banned from contacting the victim for five years on Wednesday.

Addressing Price, he told him: ‘You are 18 years old but you present as a child.

‘You are a fragile individual who would struggle to cope in custody because of your poor mental health and the fact you have resorted to self-harm in the past.

‘You have recently been admitted to hospital suffering from psychosis.’

The victim, who watched the proceedings from the public gallery, refused the offer of compensation, telling the judge she would find it ‘insulting’. 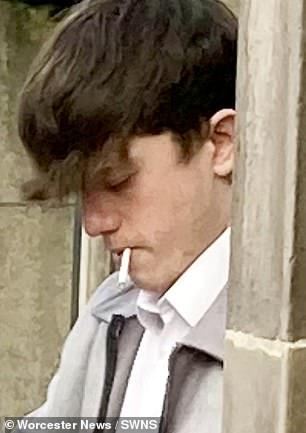 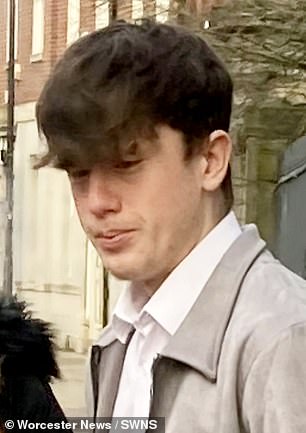 Prive (pictured) was sentenced to 12 months prison, suspended for 18 months, handed a community order and banned from contacting the victim for five years on Wednesday

Graham Russell, prosecuting, said Price began harassing the woman, who cannot be identified, on October 10 this year when she was having a drink with her friends.

She received 61 calls from a withheld number and every time she answered the phone it was Price.

He threatened to disclose a sexually explicit video before circulating the video for others to see.

In one message he said: ‘All I have left in me is pure hatred.’ In another, he wrote: ‘I honestly hope she is crying her eyes out now.’

Price said to her in a further message: ‘I will continue to make your life a living hell as long as you continue to mug me off – and that’s a promise.’

The victim said in a statement that she ‘absolutely broke down’ after reading Price’s chilling messages.

She was diagnosed with depression and received medication and counselling.

Mr Russell added: ‘She described it as one of the worst things that could ever have happened to her.

‘She was initially concerned about leaving the house for fear of meeting him. Price had sought to maximise the humiliation he inflicted.’

The woman’s family also shared a video of the defendant pacing around outside their home, ironically telling her to delete photos of him.

On November 9 while on bail for another offence, Price was staying in a YMCA hostel in Worcester when he set off a fire extinguisher outside the door of a resident.

He then threatened to knock the man ‘the f*** out’ before demanding cigarette papers and filters before battering him with a metal bar.

Price barricaded himself in his room and police spent 40 minutes persuading him to give himself up.

It became an offence to share private sexual photographs or films without the subject’s consent in April 2015, with offenders facing a maximum sentence of two years imprisonment.

Guillermo del Toro's 'Frankenstein': See What Doug Jones Would Have Looked Like as the Monster in the Film That Never Happened