China will be sending troops and tanks to Russia next month to take part in the International Army Games despite global condemnation at Putin’s atrocities in Ukraine.

The People’s Liberation Army is sending the delegation to Moscow, with personnel, tanks and military vehicles recently leaving Manzhouli in Inner Mongolia, China. 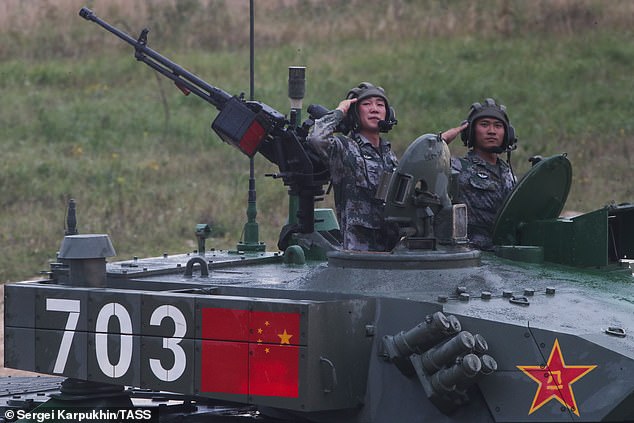 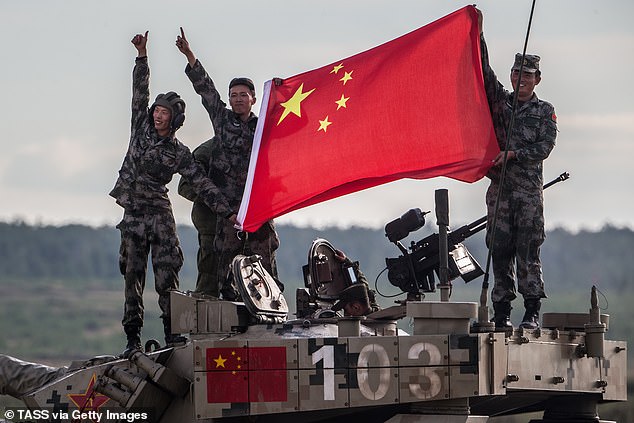 The People’s Liberation Army is sending the delegation to Moscow, with personnel, tanks and military vehicles recently leaving Manzhouli in Inner Mongolia, China (pictured in 2016)

They are expected to compete against 37 other countries and regions in Russia’s largest multinational military exercise from August 13 to 27.

Dubbed by Russian media as ‘the contest for real men’, the event features an event called the Tank Biathlon in which a crew does laps of a 5km obstacle course while shooting at targets.

Servicemen can opt to compete in 28 army disciplines, from the Medical Relay Race to a Field Kitchen competition involving army cooks.

The annual was launched by defence minister Sergei Shoigu in 2015 and are known as the War Olympics.

Russia has predictably been the champion each time. 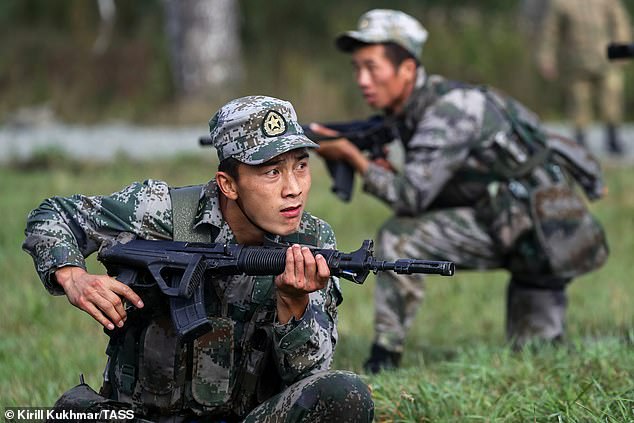 This year, Venezuela will hold a sniper competition and Niger and Rwanda will make their debuts at the games which are being held in the western hemisphere for the first time.

China has been a regular participant and will host an infantry fighting vehicles game and a frigate race.

The two superpowers of China and Russia have regularly taken part in joint military exercises as they turn away from the West.

The military cooperation has aroused suspicion but the two nations claim they have no intention to target a third country.

It comes as fears continue to grow that China will follow Russia’s barbarism in Ukraine by invading Taiwan.

Today, Taiwan President Tsai Ing-wen boarded a naval warship for only the second time in her six years in office, while overseeing its largest annual naval and air exercises. 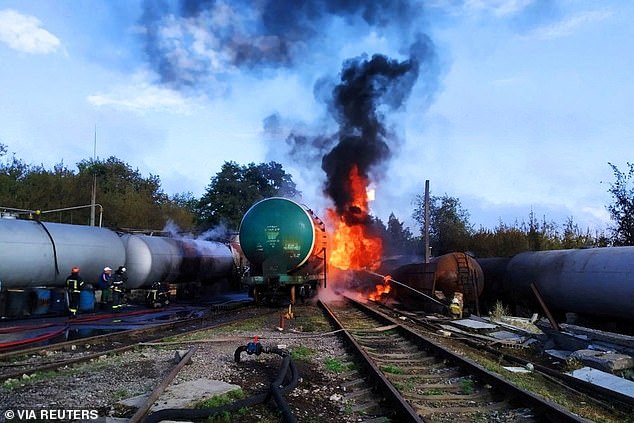 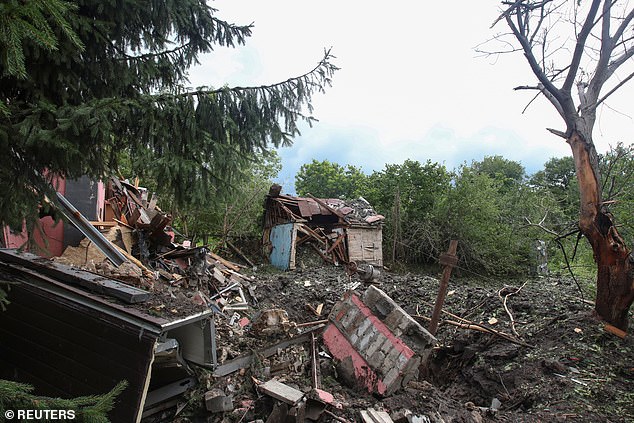 A view shows a backyard of a residential building destroyed by a Russian military strike, as Russia’s attack on Ukraine continues, in Kharkiv

The military drills, which simulate the repulsion of an invading force, coincide with air-raid exercises across the island as it boosts combat preparedness in the face of rising military pressure from Beijing.

China growing assertiveness towards the island it claims as its own, combined with Russia’s invasion, have renewed debate about how to boost defence and prompted authorities to step up preparations in the event of a Chinese attack.

Beijing considers Taiwan to be part of its territory and has never renounced using force to bring the island under its control.

Taiwan rejects Beijing’s sovereignty claims and vows to defend its freedom and democracy. 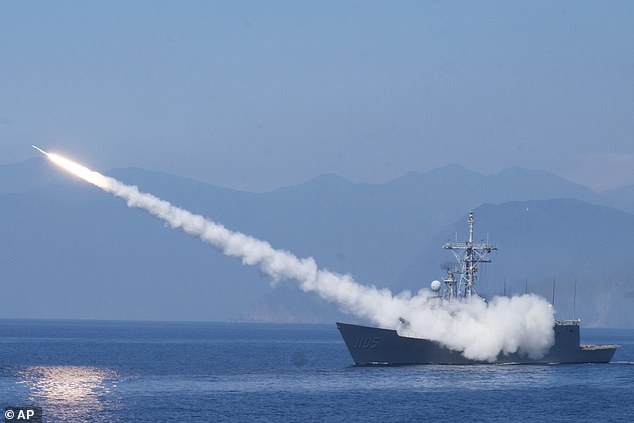 Chinese foreign ministry spokesman Zhao Lijian, asked about the drills at a regular briefing in Beijing, repeated China’s warnings about any military moves by Taiwan.

‘Taiwan’s attempt to confront China militarily is akin to a mantis trying to obstruct a chariot,’ he said. ‘In the end, it is doomed to fail.’

The five-day drills come amid rising concerns about China’s intentions towards Taiwan.

China said on Monday it heightened warnings to the Biden administration about U.S. House Speaker Nancy Pelosi’s possible visit to Taiwan. Such visits are a frequent source of tension between Beijing and Washington.

The United States does not have official diplomatic relations with Taiwan but is bound by U.S. law to provide the democratically governed island with the means to defend itself.

White House national security spokesman John Kirby told CNN in an interview there should be no unilateral change in the status quo over the island, and that the United States’ one-China policy had not changed. 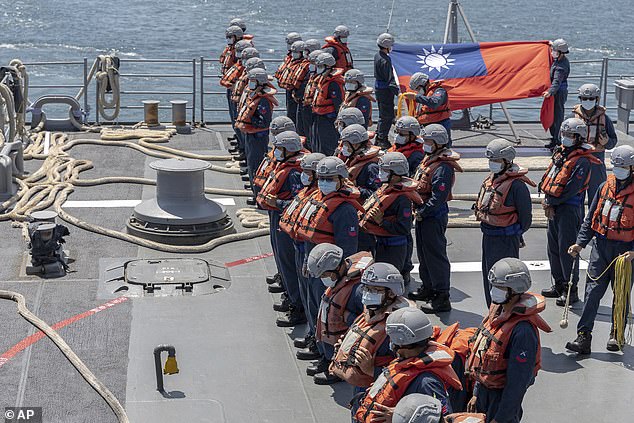 ‘None of this has to devolve into conflict. Nothing’s changed with respect to ‘one China’ or supporting Taiwan’s ability to defend itself. So there’s no reason for this to be escalated, even in just rhetoric,’ Kirby said.

He added that as far as he was aware, Pelosi had not yet made a decision on the trip.

Although Taiwan’s military is well-trained and well-equipped with mostly U.S.-made hardware, China has huge numerical superiority and is adding advanced equipment such as stealth fighters.

Speaking in a pre-recorded speech at a security forum in Taipei on Tuesday morning, Tsai said ‘authoritarian forces’ were threatening to subvert the status quo in the Indo-Pacific region and Taiwan was standing on the geopolitical frontline to ‘fight against the authoritarian aggression’.

Island-wide drills this year include repulsion of an invading force at a major harbour near the capital Taipei, urban combat practice by the reservist force, and an exercise to transfer jets across Taiwan to bunkers dug out of the side of mountains on the remote east coast to withstand a first wave of missile attacks.

Among the warships on display were the island’s new minelayer as well as a stealth corvette, which has been dubbed by Taiwan’s navy the ‘aircraft carrier killer’ due to its complement of anti-ship missiles.

Trailer For ‘Halloween’ To Drop This Week, And New Pics & Plot For One Of The Creepiest Horror Movies Of 2018

8 Best Movies at the Winter Olympics, from 'Cool Runnings' to 'I, Tonya'