Home » World News » Could tensions over Taiwan lead to WAR? China and US could collide

Could tensions over Taiwan lead to WAR? Mail Online’s video walkthrough of how China’s sabre-rattling could put it on a terrifying collision course with the United States

China is this week continuing its naval exercises in and around Taiwan in yet another round of sabre-rattling after US House Speaker Nancy Pelosi’s visit to the island.

The US has condemned the drills as an ‘irresponsible’ and ‘provocative’ move designed to undermine peace in the region – after President Xi’s repeated vows to ‘reunify’ Taiwan.

In this video, Mail Online walks through the tensions that have led up to this confrontation. 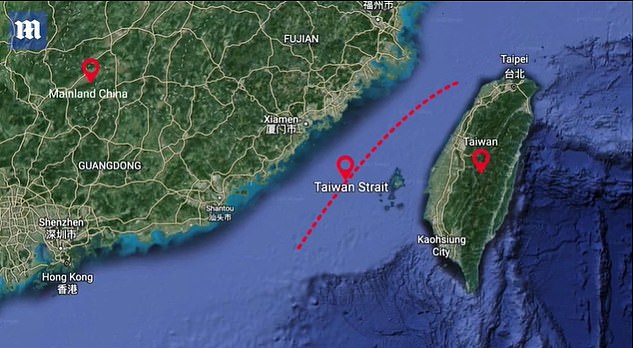 The Chinese mainland is separated from Taiwan by the narrow Taiwan Strait, with the mid-point of the waterway acting as the unofficial border between the two 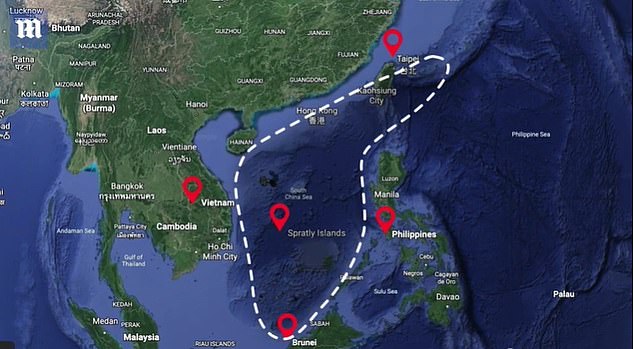 China lays claim to authority over Taiwan, and also to a vast area of nearby ocean known as the South China Sea where it has built military bases on previously-uninhabited islands

What, and where, is Taiwan?

Taiwan is a collection of islands that sits around 80 miles off the coast of southern China, where the East China Sea blends into the South China Sea.

It is home to 23million people, and has been ruled at various times by Dutch colonisers, China’s Qing emperors, and Imperial Japan. 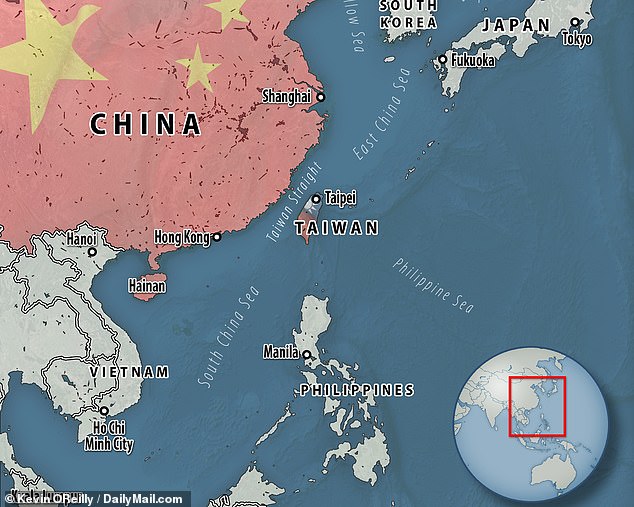 Taiwan is a set of islands located around 80 miles off the coast of mainland China, where the East China Sea meets the South China Sea

Why are there tensions around the islands?

The fighting goes back more than 100 years, to when the mainland was known as the Republic of China having done away with its last dynasty – the Qing – in 1911.

The new nation was at war with itself, divided between various feuding political factions, leftover royalists and warlords.

In an attempt to reunify the country, the Chinese Nationalist Party – fighting on behalf of the Republic – allied with the Chinese Communist Party and in 1927 they launched an attack that began the Chinese Civil War.

Their campaign met with some success but the alliance did not last, and the two were soon fighting amongst themselves.

By 1931, the Nationalists were in control of most of China but the war with the Communists had to be put on hold when Japan invaded.

That invasion ended when Japan was defeated in the Second World War. After the Japanese surrendered in 1945, the Nationalists and Communists resumed fighting.

But this time it was the Communists – supported by Soviet Russia – who emerged dominant, and in 1949 the Republic of China was forced to retreat from the mainland to Taiwan, which was already under its control.

Mao Zedong, leader of the Communists, then established the People’s Republic of China on the mainland.

Separated by the Taiwan Strait, the old enemies remain in a standoff to this day.

Taiwan views itself as an independent country, while China views it as a breakaway province to be ‘reunified’ – though in fact the Communists have never ruled there.

How did the US get involved?

America refused to recognise the People’s Republic for decades after the war ended, and instead only maintained relations with Taiwan.

Two crises in the 1950s saw Communist forces attack some of Taiwan’s outlying islands, with the US sending ships to help its ally.

But all of that changed following Mao’s death in 1976, when reformer Deng Xiaoping took over – vowing to open China up to the world.

As China modernised under Deng, President Jimmy Carter agreed to normalise relations with Beijing and in 1979 the two nations signed a deal. 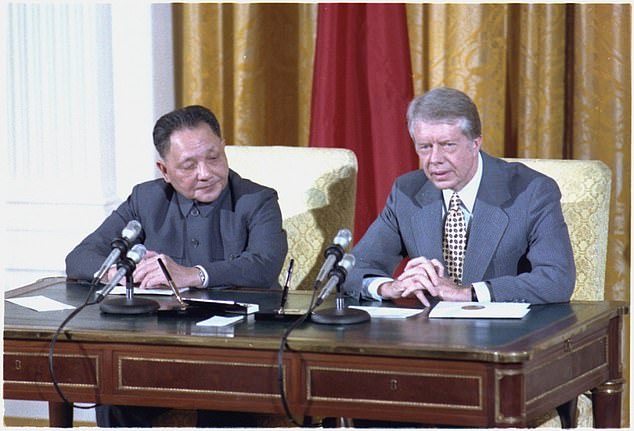 As part of that deal, the Carter administration agreed to recognise the ‘one China’ principle – that there is only one China, and Taiwan is a part of it.

But there was a backlash from Congress, which passed a law compelling America to supply weapons to the island for self-defence.

Another crisis in 1995 saw China try to intimidate Taiwan with a series of missile tests, provoking a huge display of military might by the US.

How did the current crisis start?

In 2019, Xi Jinping – the current president of China – gave a speech in which he vowed to ‘reunify’ Taiwan with the mainland, calling it the ‘great trend of history.’

Xi opened the door to peaceful reunification but added that: ‘We make no promise to abandon the use of force, and retain the option of taking all necessary measures.’

His remarks came amidst a huge update of the Chinese military, and after China had built bases on islands in the South China Sea and begun threatening US ships sailing near them.

In the years since his speech, Beijing has been menacing Taiwan by flying military jets across the Strait in increasingly large numbers.

America, meanwhile, has been forging new alliances in the region with the likes of India, Australia and Japan as a counter-balance to Beijing’s power.

What has Pelosi’s visit got to do with it?

Pelosi became the highest-ranking US official since Newt Gingrich in 1997 to visit the island when she landed on August 3, 2022.

Her visit came as part of a tour of US allies in the region, designed to show America’s support in the face of increased aggression from Beijing.

Pelosi has been a critic of China’s human rights record for decades, and the trip was seen as cementing that legacy as she nears the end of her career. 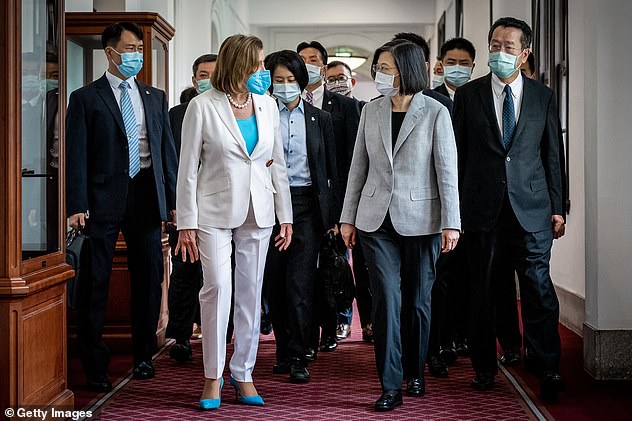 Nancy Pelosi meets with Taiwan President Tsai Ing-wen in Taipei on August 3, in a move that provoke fury in Beijing

But the visit came at a bad time for Mr Xi, who is preparing to be named president for an historic third term in the autumn and views ‘reunifying’ Taiwan as his destiny.

He has reacted with an unprecedented show of strength, vowing that ‘those who play with fire will die by it’.

Xi initially ordered six days of military drills to take place around Taiwan, that will effectively blockade the island and encroach into its territorial waters.

Now, the drills are continuing indefinitely with Beijing saying it will end them ‘when the time is right’.

Could China and the US actually go to war?

Officially, America’s policy towards Taiwan is ‘strategic ambiguity’, which means Washington refuses to say what it would do if China attacked.

But President Biden has said several times that the US would come to Taiwan’s aid in a war – though each time the White House insists that he misspoke. 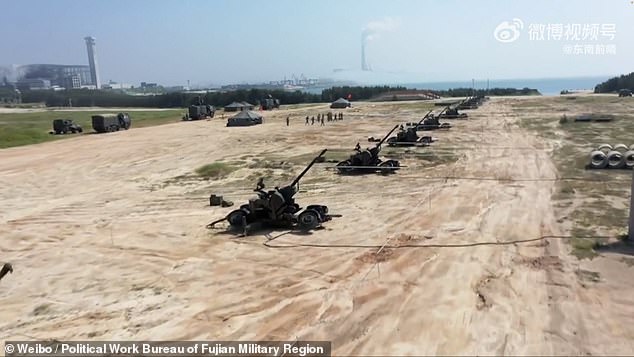 Each time Taiwan has been threatened or attacked in the past, America has sent ships and troops into harm’s way.

Should fighting break out again, it is entirely possible the US would send forces to assist its ally, putting them in the firing line of the Chinese.

By accident or design, it is easy to see how the two superpowers could come to blows – though that outcome is far from guaranteed.

What would happen if Taiwan were attacked?

Any war between Taiwan and China – whether or not it involved the US – would certainly be bloody.

Taiwan has a modern army, equipped with state-of-the-art American weapons and has been preparing for an attack from the mainland for decades.

Though small compared to China, Taiwan’s main island is still larger than Belgium and is surrounded by dozens of smaller islands.

It would not be easy to capture, and resistance is likely to be fierce. 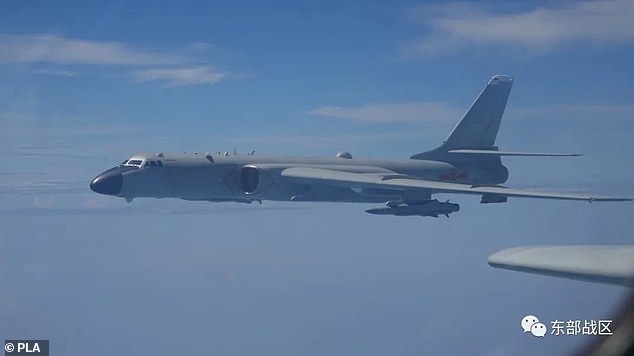 A Chinese Xian H-6 bomber is pictured in the skies over the Taiwan Strait, amid huge military drills that will effectively blockade the island

Taiwan also happens to be one of the most densely-populated places on Earth. With nowhere to flee, civilian casualties are likely to be high.

The knock-on effects would be also severe. Tit-for-tat sanctions between the US and China – the world’s two largest economies – are likely, threatening global recession.

Taiwan also sits close to important shipping channels which are likely to be disrupted, and China could throttle its own exports to the West – causing inflation.

The island itself is also the world’s single-largest manufacturer of semiconductors which are used to make computer chips, and any war would shut down production.

That would, in turn, cause shortages of everything from computers to smartphones and cars, whilst also threatening critical infrastructure such as satellites.