‘Danger to life’ Storm Hector threatens flying debris, travel chaos and blackouts as it smashes Britain tomorrow with rain and wind pushing into next week

Parts of Britain could be hit by 70mph winds tomorrow as Storm Hector barrels in from the Atlantic Ocean – with forecasters warn flying debris could pose a ‘danger to life’.

Gusts will pick up this afternoon before the brunt of the storm will be felt during tomorrow’s morning rush hour across northern England, Scotland and Northern Ireland, which are under a weather warning from 3am to 3pm.

The Met Office warned of a ‘small chance that injuries and danger to life could occur from large waves and beach material being thrown onto sea fronts, coastal roads and properties’ as well as a risk posed by flying debris. 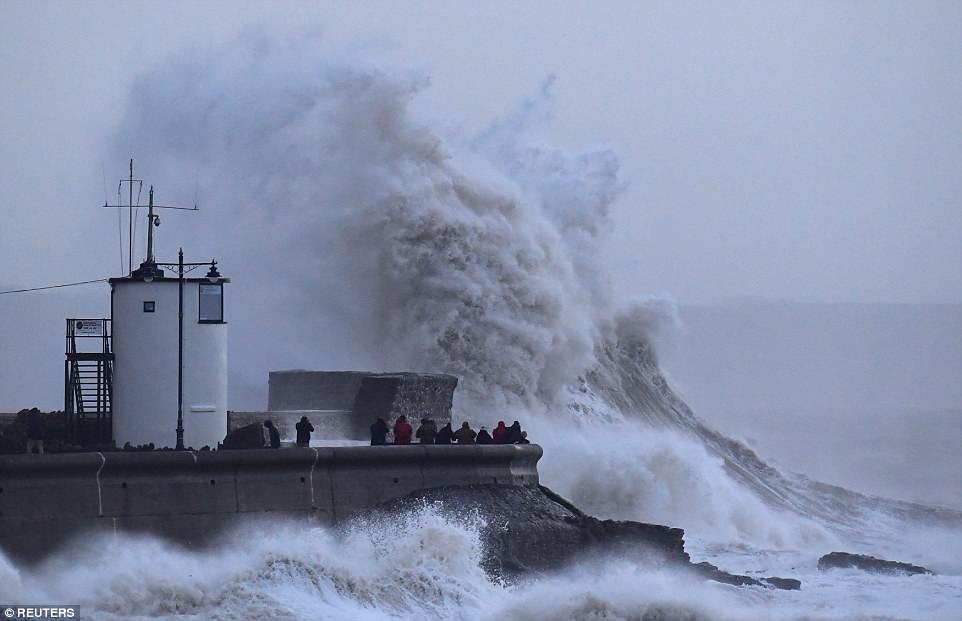 Storm Eleanor: People watch large waves and high winds as they hit the sea wall at Porthcawl in South Wales on January 3 Storm Fionn: A lorry sits abandonedon January 17  after motorists were stranded overnight on the M74 in Abington, Scotland 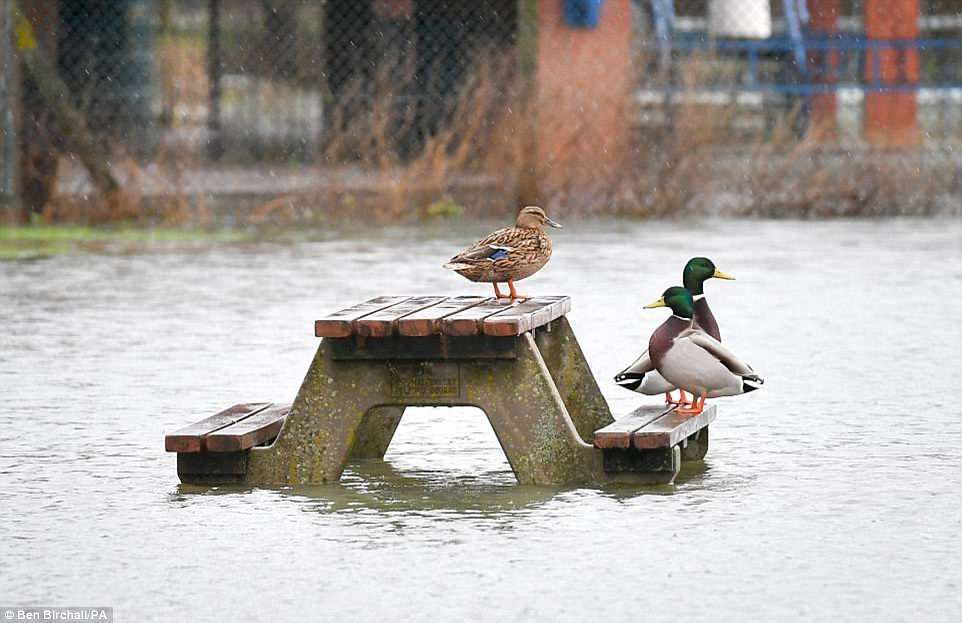 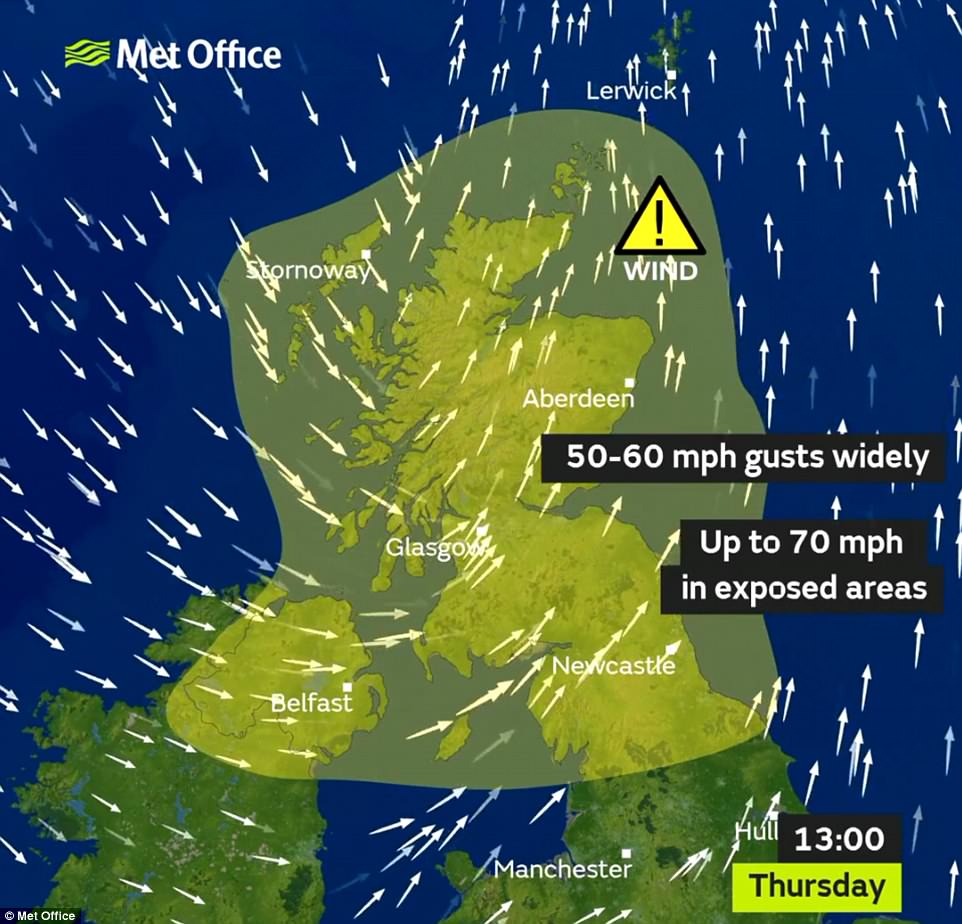 Westerly winds are likely to be between 50mph and 60mph but could reach up to 70mph in exposed locations before easing in the afternoon, forecasters said as they warned of a ‘very windy spell’ tomorrow.

The Queen and Meghan, Duchess of Sussex’s first engagement together – opening Cheshire’s Mersey Gateway Bridge and the Storyhouse Theatre – may be hit by strong gusts but is not affected by the warning.

The Met Office said road, rail, air and ferry services could be badly affected and buildings may be damaged, with a slight chance of power cuts in some parts – with the strongest winds expected in Argyll, near Oban.

Met Office forecaster Sophie Yeomans said: ‘Over the rest of England and Wales it will just be a strong, blustery day. With any outdoor events planned, it may be something people are unprepared for or come as unexpected.’ 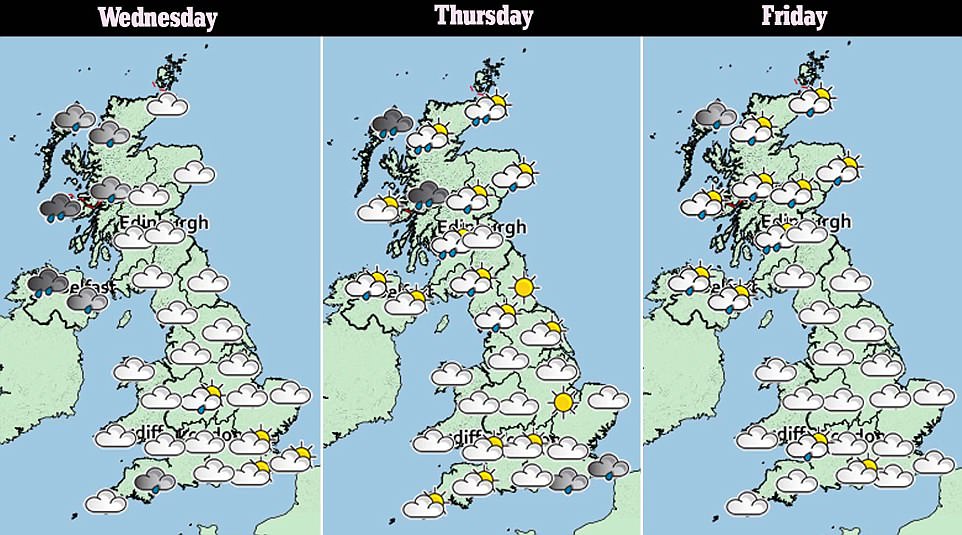 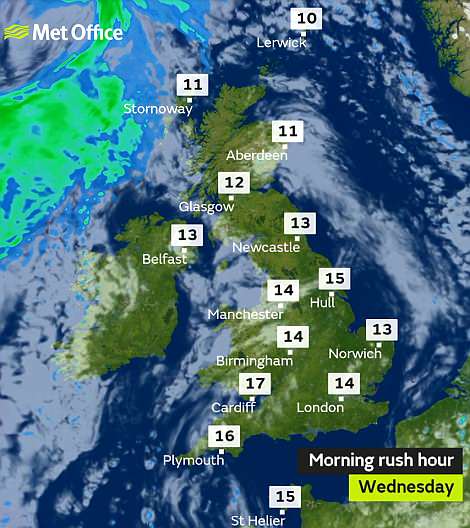 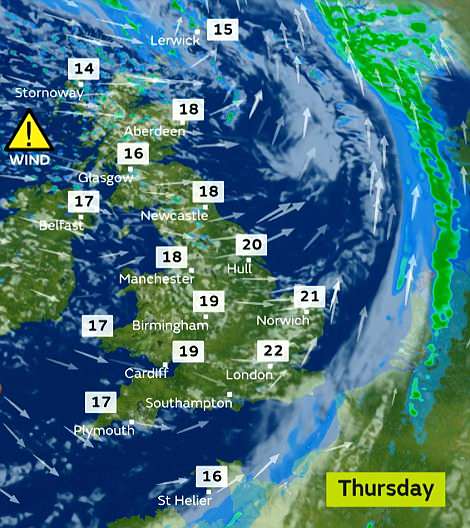 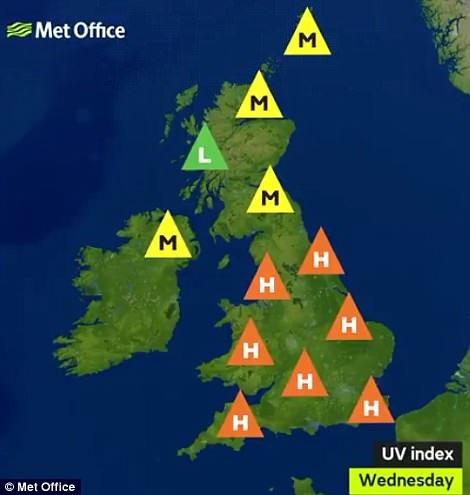 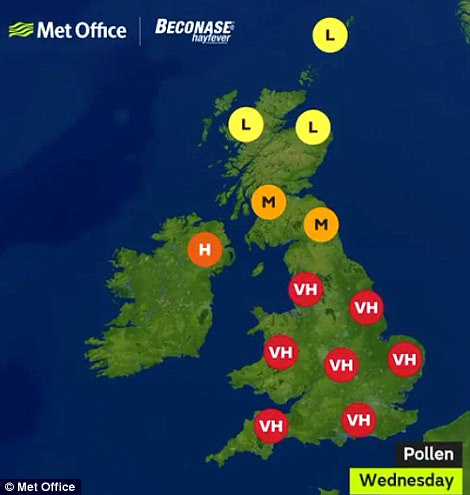 The ultraviolet radiation levels are high across England and Wales today (left), while pollen levels are very high today (right) 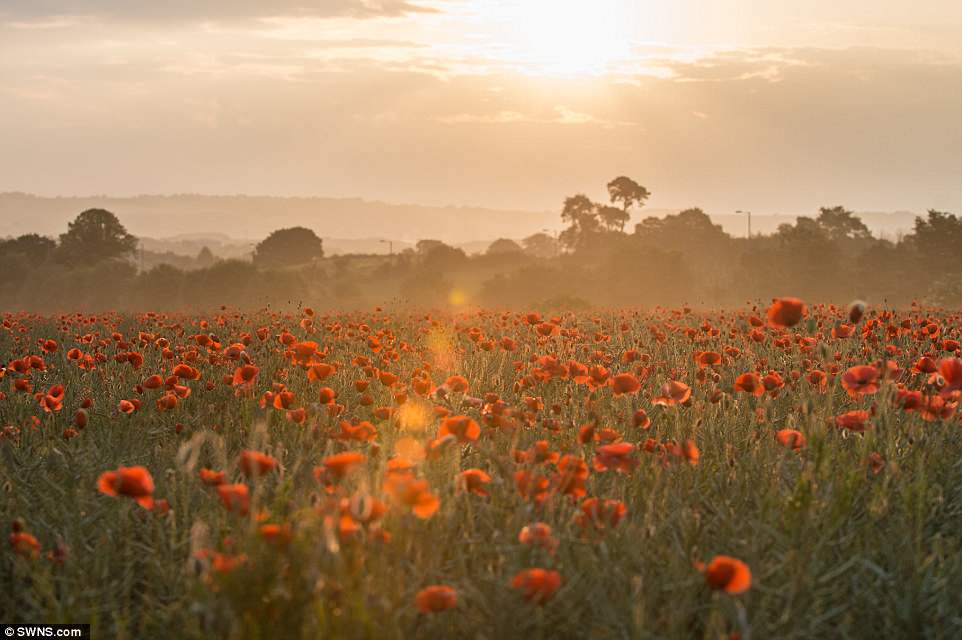 A stunning sunrise this morning over a poppy field in Kingswinford, near Dudley in the West Midlands Her colleague, forecaster Bonnie Diamond, added: ‘This will come as a shock to the system. The change will be felt quite markedly in Scotland, which has enjoyed some of the sunniest and warmest conditions.

‘High pressure is slipping away, leading to a return of the low pressure systems coming in from the Atlantic. Winds will start to pick up on the west coast on Wednesday afternoon and evening, with heavy rain associated with it.’

She added: ‘It will be the early hours of Thursday before they really get going, when gusts of 50-60mph can be expected on the western side of the country. Winds will readily move east to affect the rest of Scotland.’

In Scotland, the heavy rain will not be unwelcome to all – including gardeners and water firms. Hardly any rain has fallen so far this month, apart from localised downpours last Saturday during an electrical storm.

Stornoway, on the Isle of Lewis, has not had rain for 22 consecutive days. Scottish Water confirmed that its stocks are low in some areas because of the dry spell, but a spokesman said it is ‘able to manage our resources’.

Extreme weather events faced by Britain so far this year

Britain has faced a series of extreme weather events at both ends of the spectrum since the start of the year, including: