Michelle Hansford frets every day when her family members drive to work via the Western Highway out of Melton, and she has good reason. In the past 12 months, three of them have been in car accidents on the same stretch of road – rear-ended or sideswiped by vehicles that had to slow at short notice due to congestion.

“Every day there are accidents on that road and I just think, ‘Oh, god,’ ” she says. “You hear that people have died on that road, it just makes you feel sick.” 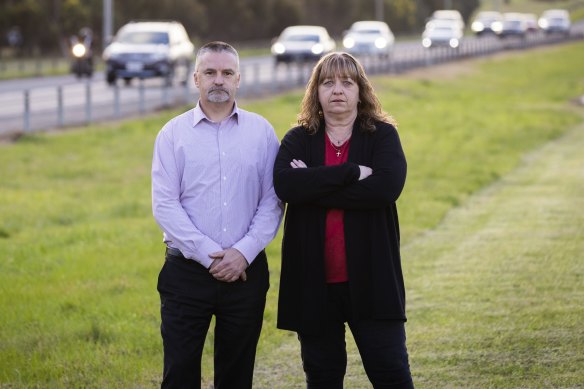 The Hansford family’s crashes were among 438 over the past decade on the 25-kilometre stretch of Western Highway between Brooklyn Road and Robinsons Road, where 136 people have been seriously injured and 10 killed.

An upgrade of this “death trap” highway tops the list of demands from Melton City Council in the lead-up to the state election as the outer-fringe electorate shapes to be a key seat in November.

The City of Melton – where 50 families move in and 50 babies are born a week – wants major upgrades of the Western Highway, Melton Highway, Hopkins Road and the Calder Park Drive corridor to deal with an explosion in housing developments over the past 15 years.

The four main roads have recorded 822 crashes over the past 10 years, 17 deaths and 284 serious injuries. Comparable data for other Melbourne roads is not available, but the Melton local government area features in the top 10 of 33 metropolitan local government areas for serious accidents and fatalities over the past decade, recording 56 deaths and 47 serious injuries.

City of Melton is the third-fastest-growing council area in the country, and is on track to match Canberra’s population of 500,000 residents by 2050. About three-quarters of the area’s residents need to leave it for work each day, but places such as Rockbank are serviced only by a V-Line train twice an hour during the morning peak.

“The rail line still hasn’t been electrified despite promises dating back forty years,” Mayor Goran Kesic said. He said his council had been lobbying for electrification of the Melton-Bacchus Marsh railway for years, but with no obvious plan from the state government he was instead focusing efforts on a public campaign for immediate road improvements. 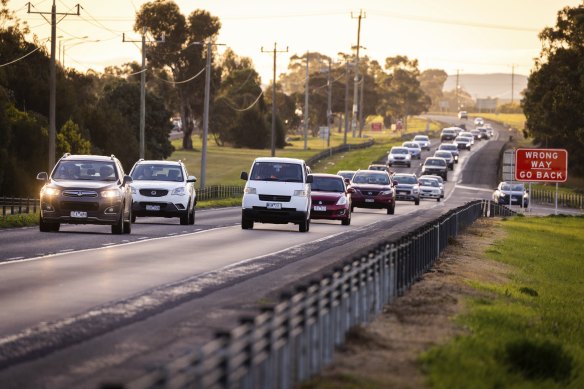 But Kesic said Melton was being overlooked and was handling not only a surge in local drivers from housing estates but also, on roads such as the Western Highway, vehicles heading to Ballarat, Geelong and South Australia.

“It’s the sheer numbers of the vehicles on a very small, basic road which is what I say is ‘chariot-class’,” he said.

Liz Taylor, a senior lecturer in urban planning and design at Monash University, said she “lacked words” for the scale of growth in Melton over the past 15 years, with much attributed to an explosion in housing estates in what used to be empty paddocks.

Developers of housing estates contribute a tax to fund infrastructure to cater for the people they bring to an area, but Taylor said the way the money was allocated by state governments was “opaque” and it was not dispensed in a timely way that kept pace with growth.

“I wouldn’t say [growth in Melton] is without strategy, but there is a lag [in funding],” she said. “It happens over decades when people are moving there now.”

Before the federal election earlier this year, Labor committed to a $10 million business case for the Western Highway upgrade, and the state government allocated $14.9 million to duplicate a small section of the Melton Highway.

But Kesic said those commitments fell well short of the work needed, and his area was being overlooked compared with other growth corridors.

“There is so much more to be done. This is just a drop in the sea really,” he said.

A spokeswoman for the government pointed to its investment in roads in Melbourne’s west through the Western Roads Upgrade, and said the Western Rail Plan was “investigating a fast, high-capacity rail network servicing growing outer suburbs and regional cities”.

Melton, once a safe Labor seat, is tipped as an electorate to watch at the November state election, among several outer-suburban seats up for grabs due in part to dissatisfaction with lockdowns and cost-of-living pressures.

In 2018, Labor recorded a statewide 5 per cent swing in its favour, but in Melton there was a 7 per cent swing to the Liberal Party. The Liberals have preselected former Burwood MP Graham Watt.

Coalition spokesman for public transport and roads Danny O’Brien said the Liberal candidate had lobbied him on “local needs in Melton” and the Coalition would announce road policies closer to the election.

“So many communities want to see investment in road projects but they are being stymied by a government that has overseen cost blowouts of $30 billion on Melbourne mega-projects,” he said.

Woman's seemingly innocent monochrome dress has a rude pattern – can you spot it?

'90 Day Fiancé': All the Drama Between Michael Jessen and Juliana Custodio Explained