Drag Queen Aida H Dee posed for photos with police officers as they joined council security staff at protests and counter-protests outside Cornish libraries this week where he was reading stories to children.

The Drag Queen Story Hour tour of libraries across the country saw clashes between rival groups in Bristol and Reading last week.

Yesterday, supporters waved the LGBTQ+ rainbow flag while protesters in Bodmin, Cornwall while protesters against held signs stating ‘We are against grooming’, ‘Leave our kids alone’, ‘Let kids be kids’ and ‘We are not transphobic’.

But large contingents of counter-protesters have begun showing up to the libraries Aida visits, and the publicity is attracting families to sign up for the reading hours.

Unlike in previous protests, when Sab Samuel, the children’s author and drag performer behind Aida H Dee, had to be escorted off-site for his own safety, protesters left Cornish libraries before he and families exited the building.

Drag Queen Story Hour originally started in America to ‘inspire a love of reading, while teaching deeper lessons on diversity, self-love and an appreciation of others’. 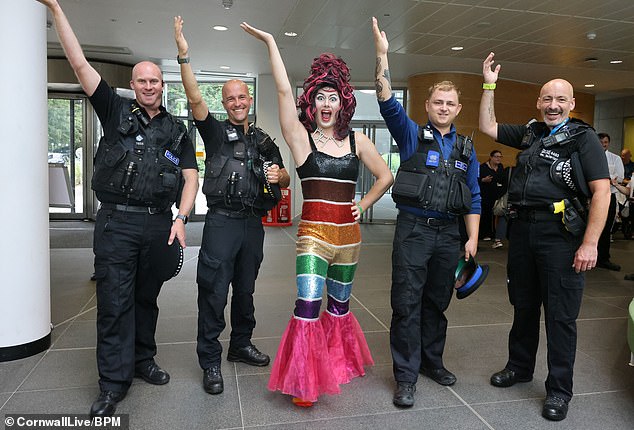 Aida H Dee (centre), also know as Sab Samuel, poses with police officers at Bodmin Library on Tuesday after protesters showed up to the story hour 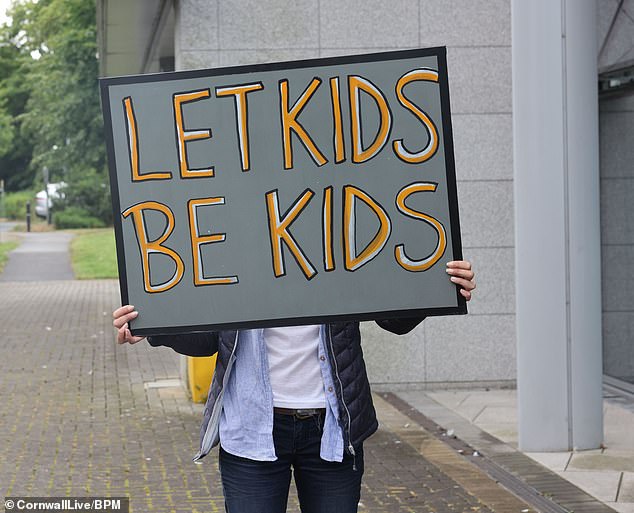 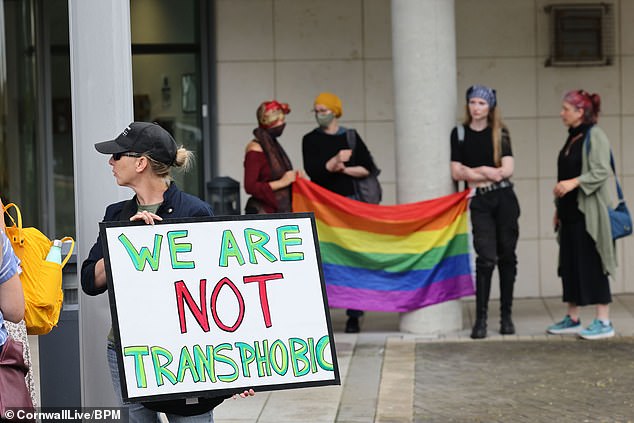 UK organisers say it is about teaching inclusion and encouraging children to express their ‘creative’ and ‘fabulous’ sides.

Both Aida H Dee and Irish-based drag queen Cherrie Ontop have spoken openly about the horrific abuse and death threats they receive on a daily basis since participating in the project.

Those calling for an end to Drag Queen Story Hour have called the queens  ‘groomer’, ‘paedophile’ and said they are ‘abusing children’ – all claims which have no factual basis.

As with the majority of people who come into contact with children as part of their job, all the drag queens involved in the project have a full DBS check before they can work in libraries.

Mr Samuel said: ‘I’m disappointed that they haven’t come out with anything original.’

He said events have largely gone ahead as planned, and posted on social media explaining libraries have phoned ticketed attendees and told them a new place and time to avoid confrontational protests – but this did not work for his most recent Cornwall events.

He described the protesters as extremists, citing online abuse he has received which is ‘almost constant’.

Mr Samuel added: ‘The vast majority [of protesters] are not even from this area.

‘They will get bored and they will move on. The problem is that nobody, the police, nobody is stopping them.

‘They are inciting hate.’

‘Masquerading as protecting kids, this organisation is the one that’s putting our communities at risk.

‘In libraries across the region, children have turned up to hear stories and have been met with bigotry and homophobic signs.

‘But communities across Cornwall have made it clear that this hate does not represent us. We are both from the LGBTQ+ community and stand in solidarity with the LGBQT+ community.

‘While we are proud to have stood up for a diverse and tolerant Cornwall, we are saddened that we have had to stand outside our libraries to counter these abusive messages.’

A security guard at the Bodmin reading commented that the kids were ‘laughing their heads off’ at Aida, who was a ‘great storyteller’.

Cheering could be heard from the library as the drag queen read stories, including his own book about three goats, which tackles bullying.

As the families left the story hour session, parents and children asked for selfies with Aida, who said the protests were a ‘distraction’. 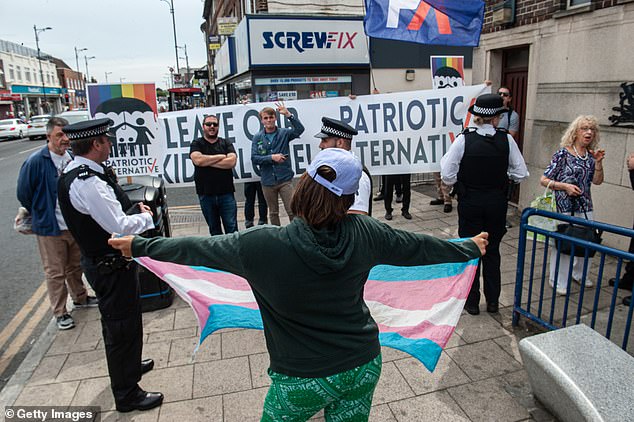 In Bristol last week, protesters showed up with giant banners from the far-right group Patriotic Alternative

The drag queen, who said Cornwall’s libraries have been the most supportive on the UK tour, added: ‘I do have concerns for my own safety and that of families who are coming to see me.

‘I thought the protests might put people off, but it’s actually attracting more people who are really supportive. My biggest concern is whether the council will be willing to do it again.’

At the majority of events, anti-LGBT+ protesters have carried large banners identifying them as members of the far-right organisation Patriotic Alternative.

The organisation spreads widely debunked conspiracy theories such as the great replacement theory, which claims mass waves of immigrants are entering the UK with the aim of making white Brits a minority.

The group is fiercely against the LGBT+ community. Its website states: ‘The central building block of our nation is the traditional, nuclear family, which consists of a mother, father and children.

‘To that end, children will be protected from exposure to sexualised material or LGBT propaganda in all public institutions.’

In on of the latest examples of the protests, at Henleaze library in Bristol video footage shows a protestor explaining the group’s opposition to the drag queen story hour and claiming they have protest groups ‘all over the country’, mobilised to ‘put an end to this sexual exploitation of children.’

Mark Nelson, one of those protesting in Bodmin, told CornwallLive: ‘This is the seventh library protest I have attended.

‘Upon arriving at Bodmin library today I was told by a security guard the area was ‘out of bounds’ and he wouldn’t let me use the public car park or enter the building.

‘At each of these protests we have been met by far left-wing counter protesters who insist on keeping their faces covered. When we try to open dialogue with these people we get called all sorts of names such as ‘transphobic’ and ‘racist’.

‘This is simply not true. We are only concerned parents and grandparents who believe this is an adult conversation that has no place being pushed on to toddlers and young children.’

Pro-LGBT+ protesters disagree, and Aida H Dee does too: ‘It’s not about being dressed in drag, it’s about having someone to relate to.

‘What I am doing is saving lives. How many kids have I read my stories to and been that role model that I wish I’d had?

‘How many children have I saved?’

Many people have been supportive of the programme on social media and thanked him for his efforts in rearranging the story hours.

According to a survey released in May last year, young LGBT+ people are three times more likely to self-harm and twice as likely to contemplate suicide as their non-LGBT+ peers.

The research by group Just Like Us found that 68% of LGBT+ young people had experienced suicidal thoughts, compared with 29% of young people who were not LGBT+ during lockdown.

Nearly a third of the young people surveyed had self-harmed, compared with 9% of non-LGBT+ young people.

Cornwall Council leader Linda Taylor said: ‘There is so much going on in Cornwall’s libraries with activities to suit every age group to get children engaged, listening and learning whilst having a lot of fun.

‘Drag Queen Story Hour is one example. These events offer children a rich experience in story telling in an interactive way.

‘Developing reading skills and an understanding of different communities provides children with a positive start in life that in turn can reduce inequalities.

‘The events are being held as part of a national tour of libraries and institutions including the British Museum, and they demonstrate that Cornwall’s libraries are inclusive, vibrant, and wholly positive spaces open to everyone.

Feedback from one parent in Cornwall said: ‘The Drag Queen Story Time event was fabulously joyous. Colourful, amusing and very engaging, brilliantly delivered by a performer that clearly knows the audience they are working with. My seven-year-old absolutely loved it’.’

Another mum from Bodmin who attended Tuesday’s event added: ‘It was hilarious and really good fun – my kids loved it and wanted to come because they love RuPaul’s Drag Race. There was nothing sexual about it.’

‘The books that I choose are all about acceptance and equality and diversity.

‘People think that I was trying to brainwash children. I don’t really understand that because for me, being a gay person is not a choice, and it is nothing that can be forced upon you.’