The funeral of former Egyptian dictator Hosni Mubarak took place in Cairo on Wednesday as his body was flown to a mosque in the city’s east by helicopter before the casket was carried out by an honour guard.

Dozens of Mubarak supporters, clad in black and carrying posters of the former president, watched the helicopter sweep in before the Republican Guard carried Mubarak’s casket out wrapped in the Egyptian flag.

Mubarak ruled Egypt for 30 years before he was ousted during the Arab Spring protests in 2011. He died Tuesday aged 91 from kidney and heart problems, having been admitted to hospital last month for intestinal surgery. 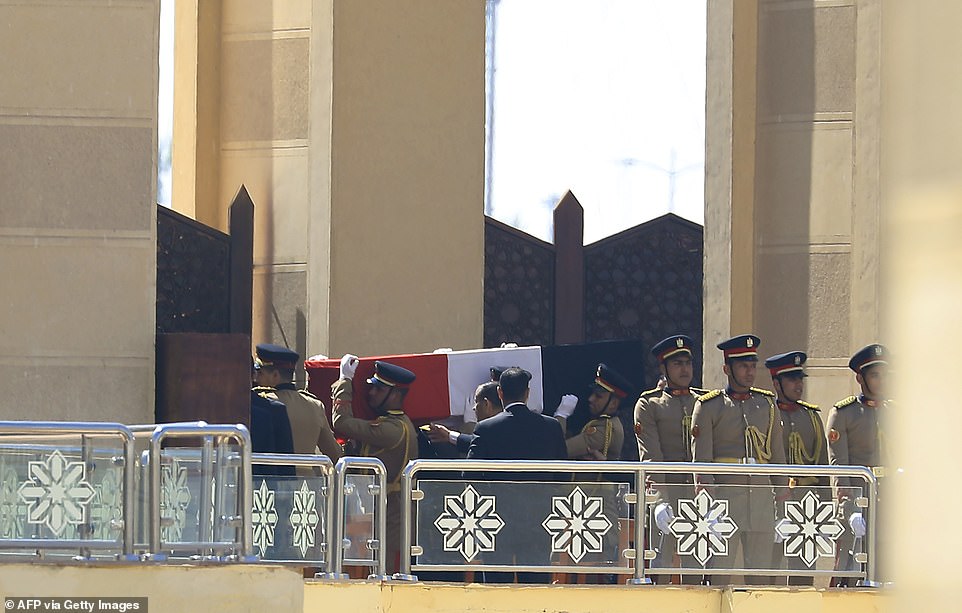 Egypt held a funeral for former dictator Hosni Mubarak on Wednesday, a day after he died in hospital in hospital from heart and kidney problems aged 91 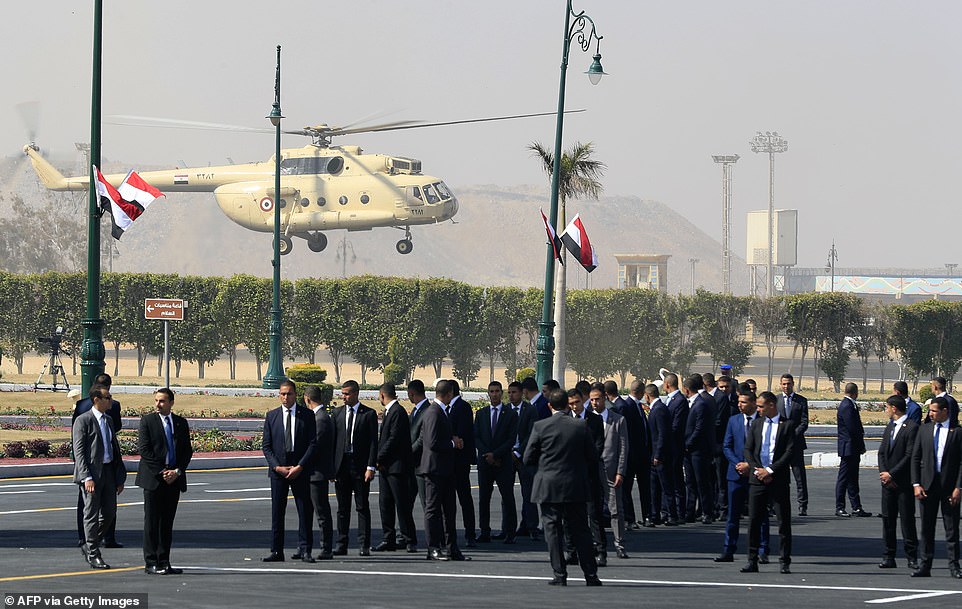 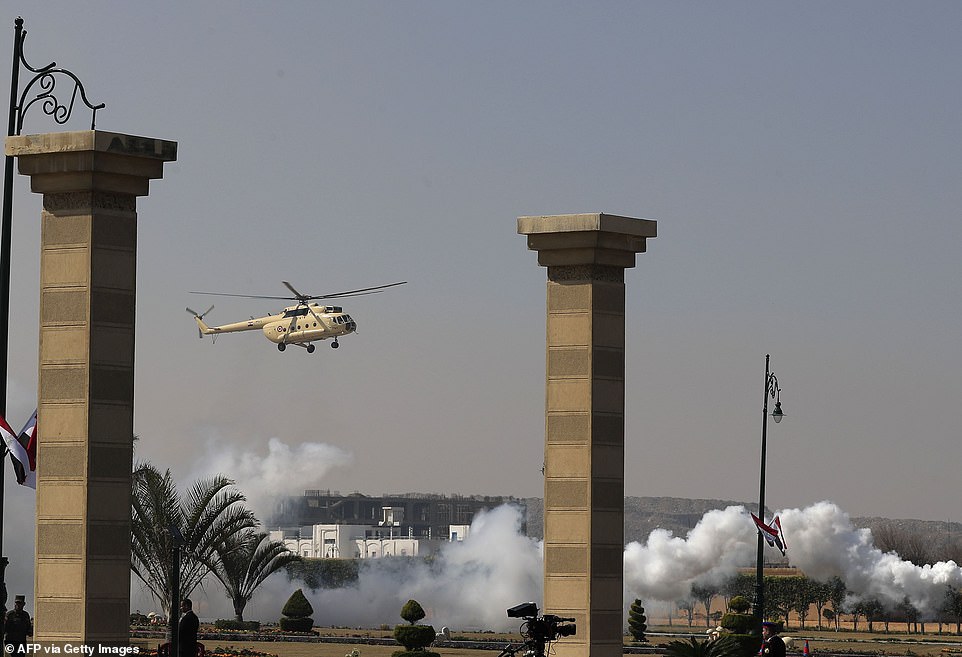 Mubarak, who commanded Egypt’s air force during the October War against Israel before becoming the country’s leader when his predecessor and mentor was shot, led the country for three decades 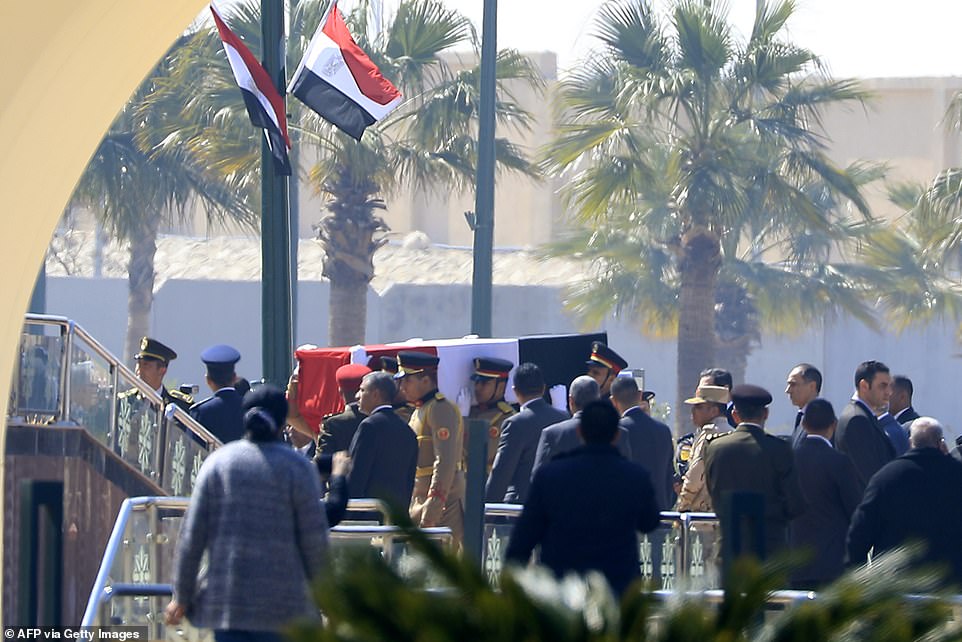 Despite remaining popular among older Egyptians who honoured his war efforts, Mubarak was ousted during Arab Spring protests by mostly-young revolutionaries in 2011 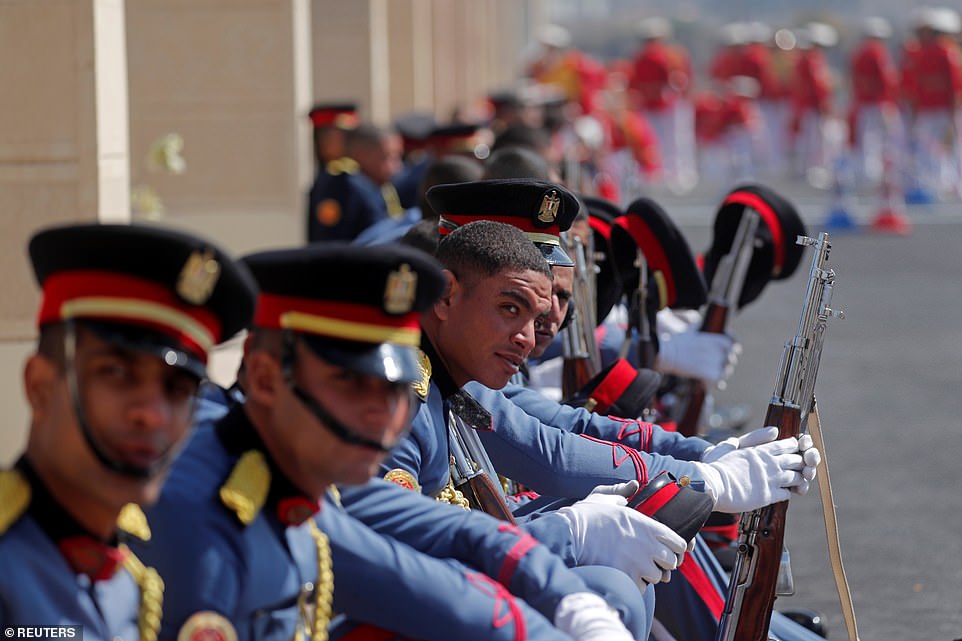 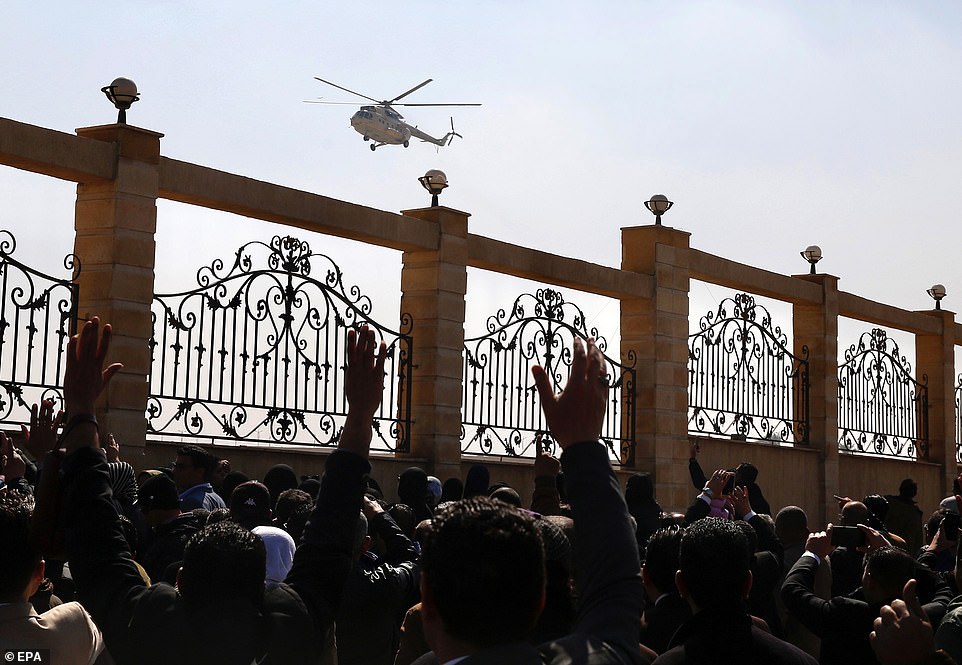 Perhaps ironically, his funeral took place at the Tantawi Mosque in eastern Cairo, named for now retired Field Marshal Hussein Tantawi, who headed the military council that ran Egypt following Mubarak’s ouster and until the election of Islamist President Mohammed Morsi in 2012.

Egyptian President Abdel Fattah el-Sissi was expected to attend the service, to be followed by the burial at the cemetery in Cairo’s Heliopolis, Mubarak’s home district for most of his rule and where he lived until his death.

Gulf Arab leaders were also expected to attend the service.

‘Through his military and political career, Mubarak made undeniable achievements and sacrifices,’ the state-run al-Aharm newspaper eulogized Mubarak in its editorial Wednesday.

On Tuesday, el-Sissi offered condolences to Mubarak’s family and praised his service during the 1973 war with Israel but made no mention of his rule as president of the most populous Arab state. El-Sissy also announced three days of national mourning beginning, Wednesday.

Pro-government media paid tribute to Mubarak, focusing on his role in the 1973 war with Israel when Mubarak, a pilot by training, commanded Egypt’s air force.

Born in May 1928, Mubarak was vice president on Oct. 6, 1981, when his mentor, President Anwar Sadat, was assassinated by Islamic extremists while reviewing a military parade. 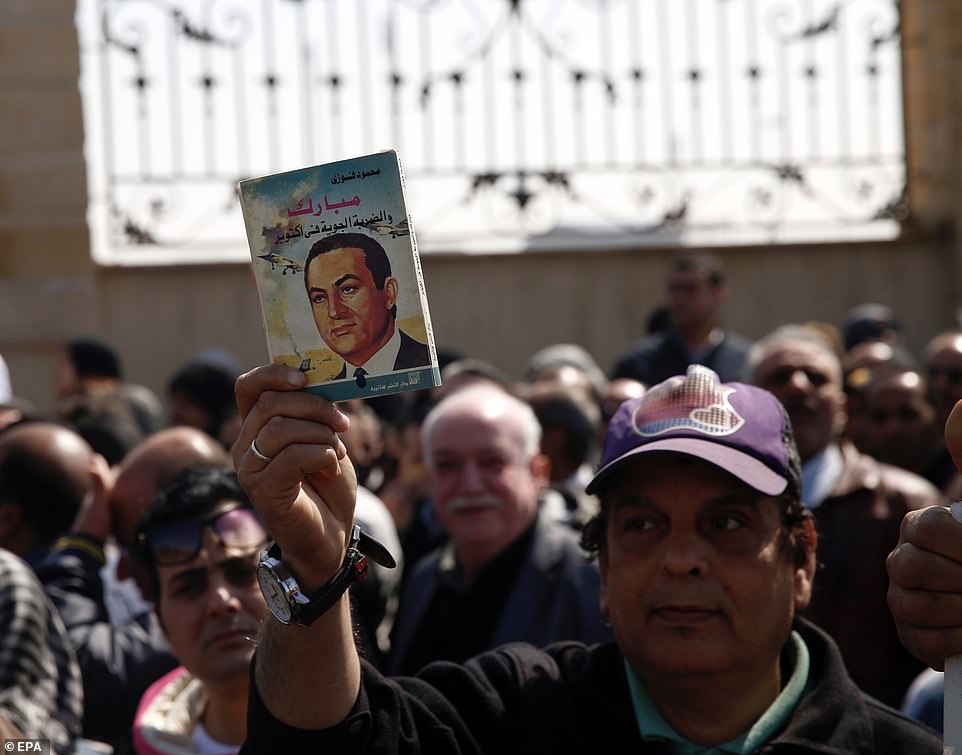 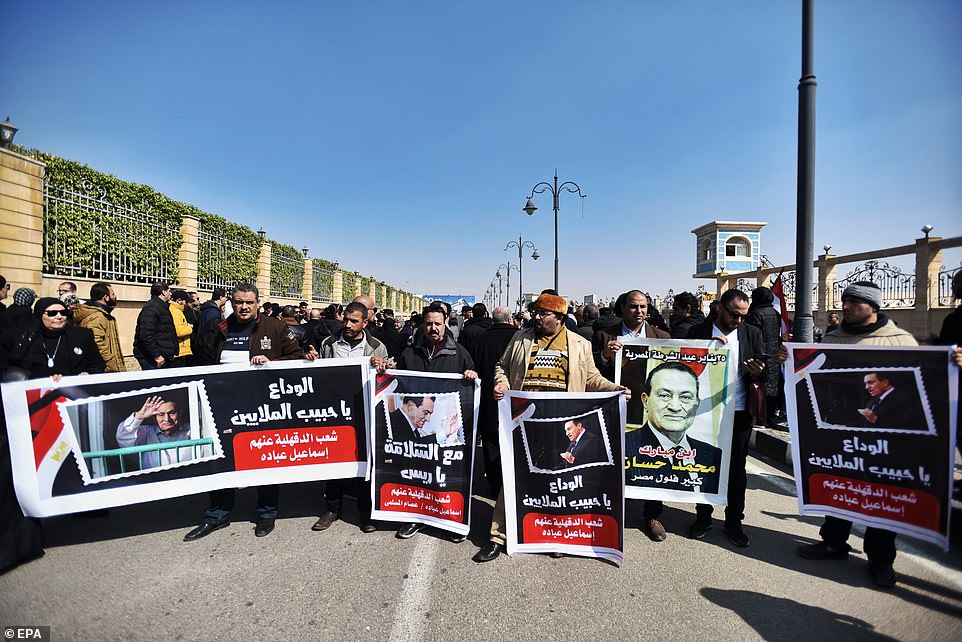 Mubarak ruled Egypt from October 1981 till January 2011, when he stepped down in the face of Arab Spring protests but remains popular among older Egyptians for his leadership during the 1973 October War 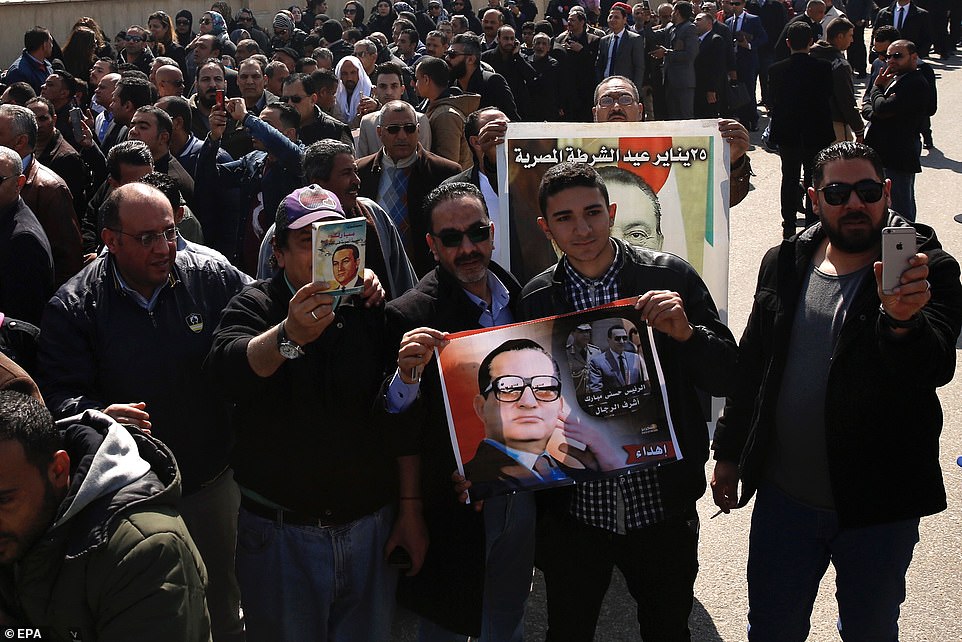 People hold photos of late former Egyptian President Hosni Mubarak as they gather outside Mosheer Tantawy mosque ahead of Mubarak’s funeral, in Cairo 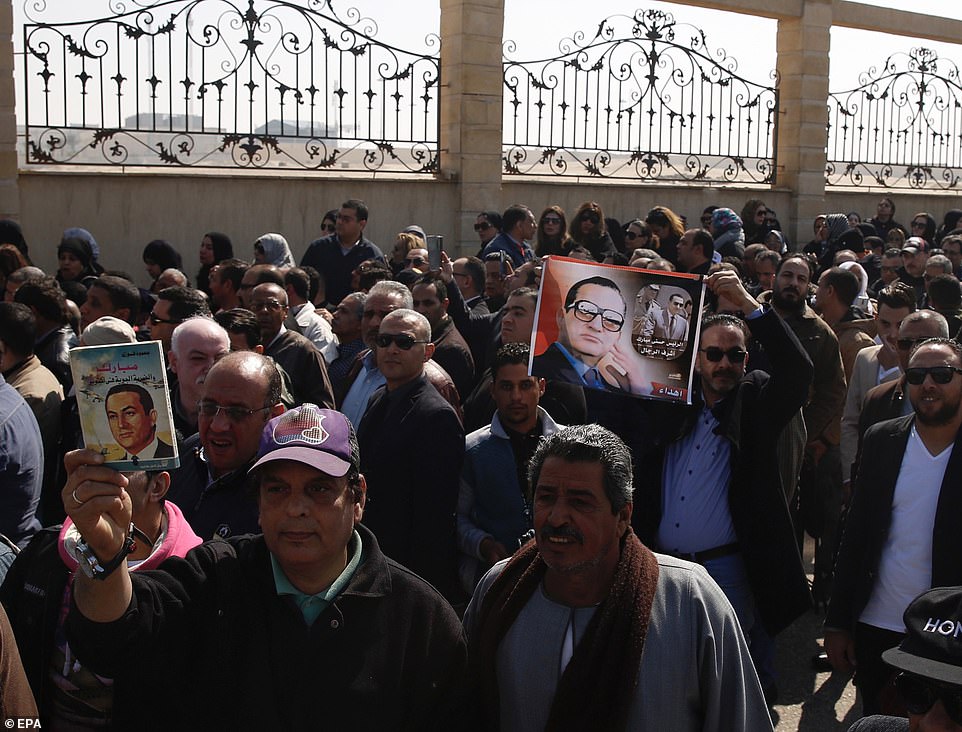 Mubarak was sentenced to life in prison in 2012 for failing to prevent the killing of some 900 protesters during the Arab Spring uprising, but was cleared on a retrial in 2014. He was jailed again for corruption, and walked free in 2017 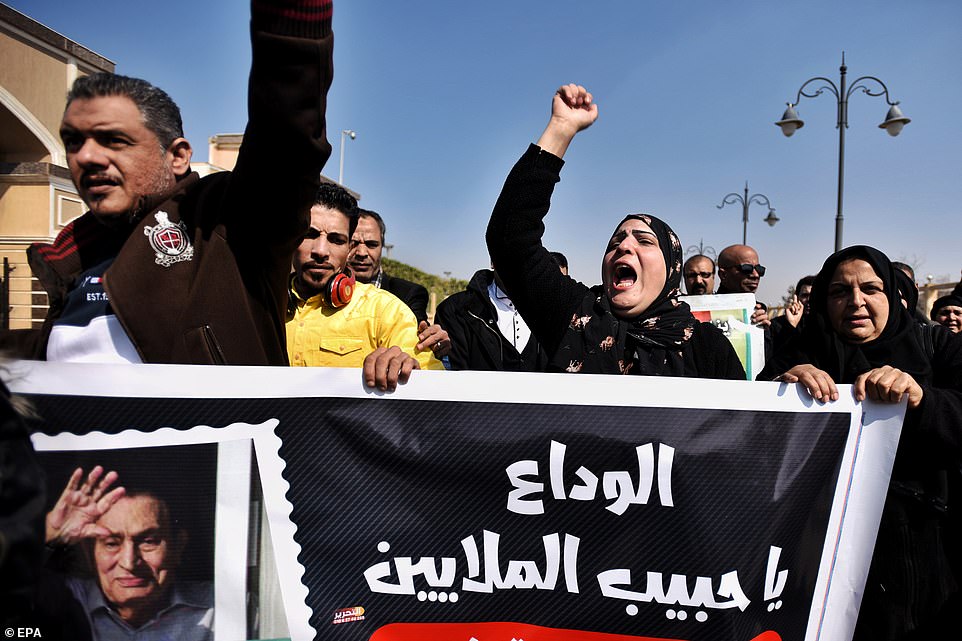 Seated next to Sadat, Mubarak escaped with a minor hand injury as gunmen sprayed the reviewing stand with bullets. Eight days later, the brawny former air force commander was sworn in as president, promising continuity and order.

Mubarak’s rule was marked by a close alliance with the U.S. in the fight against Islamic militancy and assisting regional peace efforts.

Many older Egyptians, who had long considered him invincible, were stunned by the images of Mubarak on a gurney bed being taken to court for sessions of his trial in Cairo following his ouster.

Mubarak’s overthrow plunged Egypt into years of chaos and uncertainty, and set up a power struggle between the military and the Muslim Brotherhood group that he had long outlawed.

Some two and a half years after Mubarak’s ouster, el-Sissi led the military overthrow of Egypt’s first freely elected president, Morsi, and rolled back freedoms gained in the 2011 uprising.

In June 2012, Mubarak and his security chief were sentenced to life in prison for failing to prevent the killing of some 900 protesters during the 18-day uprising.

Both appealed the verdict and a higher court later cleared them in 2014.

The following year, Mubarak and his two sons – wealthy businessman Alaa and Mubarak’s one-time heir apparent Gamal – were sentenced to three years in prison on corruption charges during a retrial.

The sons were released in 2015 for time served, while Mubarak walked free in 2017.

Is Anyone in Fashion Still Designing for Powerful Women? Yep, These Brands Are

‘Once Upon a Time’ actor Gabe Khouth dead at 46

Red Dead Redemption 2's third trailer is here, and it looks like John Marston is coming back