Elderly Britons are refusing the Pfizer Covid-19 vaccine because they’d rather ‘wait for the English one’ and failing to turn up for appointments as ministers scramble to turbo-charge the jab’s roll out.

Over 80s have turned their noses up at the Belgium-made shots in Stockon-on-Tees, the North East, and insisted on having the Oxford jab, said Dr Paul Williams who is administering the jabs to residents.

And missed appointments led to up to 10 police officers receiving their first doses in Nottingham to prevent vital supplies going to waste.

Once defrosted from -78C (-104F) doses of the Pfizer jab must be used within two days, official guidance from the UK’s regulator says.

Some 1.1million Britons had been vaccinated by the fourth week of the UK’s roll out, the latest NHS England figures show, with 308,500 doses administered last week.

Boris Johnson has promised 13million people – all over 70s, care home residents, NHS staff, and the vulnerable – will get their jabs by mid-February as he seeks to put rocket boosters under the roll out.

As many as seven mass vaccination centres are set to open in England to aide this, set up in locations including sports stadiums and London’s ExCeL centre.

But critics have warned the target is ‘over-ambitious’ and said the Prime Minister should not make promises he won’t be able to meet. 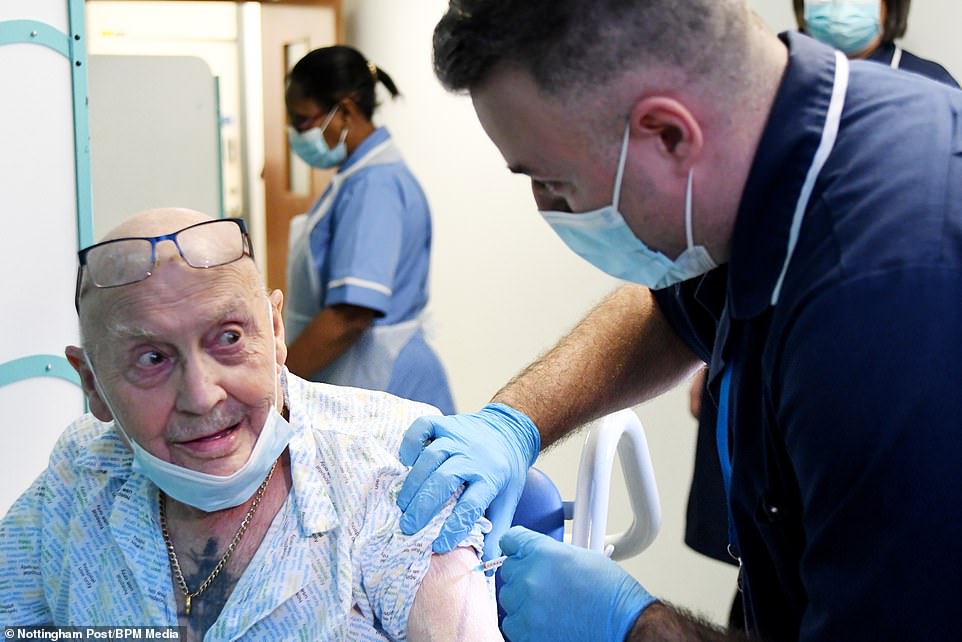 Elderly patients have been refusing the Pfizer Covid-19 vaccine in Stockton insisting they would rather ‘wait for the English one’. Above is Donald Colley, 87, receiving a Covid-19 vaccination in Nottingham. There is no suggestion he refused the jabs 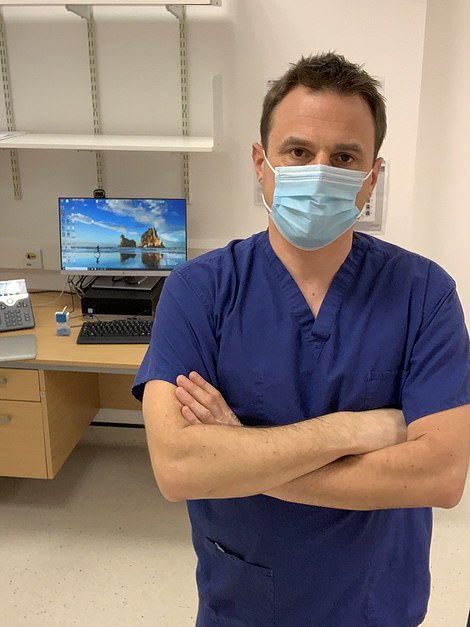 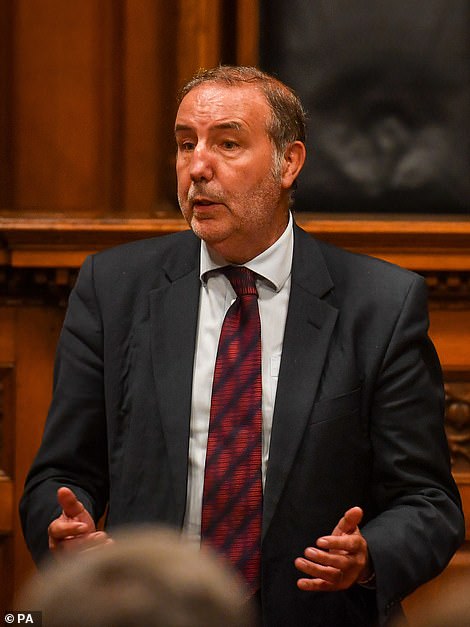 Dr Paul Williams, left, said patients in Stockton were refusing the Pfizer vaccine. He was previously the Labour MP for the area. Nottinghamshire’s police and crime commissioner Paddy Tipping, right, said police officers were not being pushed to the front of the queue

NHS England figures today showed that 1,092,885 people were vaccinated against Covid-19 between December 8 and January 3.

654,810 of them were over the age of 80 – the highest priority group – meaning that around one in five of all people in that age bracket have now been immunised. There are an estimated 3.4m over-80s in England.

A further 438,075 people under the age of 80 received a vaccine during the first 3.5 weeks of the programme. Most or even all of them will have been health and care workers, who are also high up the priority list.

None of the statistics so far include people vaccinated with the Oxford University and AstraZeneca vaccine, which came into use this Monday, January 4.

The Government is aiming to immunise 13.9million of the country’s most vulnerable people by mid-February so it can start to lift national lockdown rules.

To hit this ambitious target it will have to accelerate its vaccine programme at breakneck speed to hit an average 2million per week, including this week.

Part of helping this process is a controversial plan to only offer people the first dose to begin with, postponing the second for up to three months later. NHS data, however, shows that 19,981 people have already received a full two doses.

During the first phase of vaccinations, jabs were given out at 107 hospital hubs and 595 local vaccination sites. The Government said this will be increased to more than 1,000 vaccination stations by the end of this week, with 730 already operational.

Dr Williams, who is also the former Labour MP for Stockton, vented his fury at those saying they will only have the Oxford/AstraZeneca jab today.

‘Some local patients have turned down an offer this weekend of getting a Covid vaccine when they found out it was the Pfizer one. “I’ll wait for the English one”,’ he wrote on Twitter.

‘People at risk of death in the depths of a pandemic.

‘A lesson that nationalism has consequences.’

He added: ‘Please take care everyone. This is real and this has just got more serious.’

It is thought to cost around £39 to get each dose of the Pfizer vaccine to patients.

Nottinghamshire Police has confirmed some of its officers working at vaccine centres received jabs but added there were no plans to roll it out across the force.

The leader of a borough council in the county, John Clarke, told Nottinghamshire Live he was ‘appalled’ people were failing to attend appointments.

‘There is a lot that has gone into this and it disturbs me that people are not taking full advantage of it,’ he said.

‘The NHS needs to tighten up the wastage because we are all so desperate for this injection.’

Nottinghamshire’s police and crime commissioner Paddy Tipping added to the publication that no one was pushing officers to the front of the queue.

‘But if it is available we don’t want to destroy it and it is best we use it in a positive and constructive way. Police are delighted to have been asked.’

The roll out of the Pfizer vaccine hit a bump early on when it emerged each vial could contain up to two extra doses of the jab.

The manufacturer said these had been put in to protect against spillages or wastage when some of the liquid becomes stuck in the syringe.

But the discovery has meant many vaccination centres have rapidly drawn up a priority list of those they can call in for vaccinations when there are extra doses in the vials. 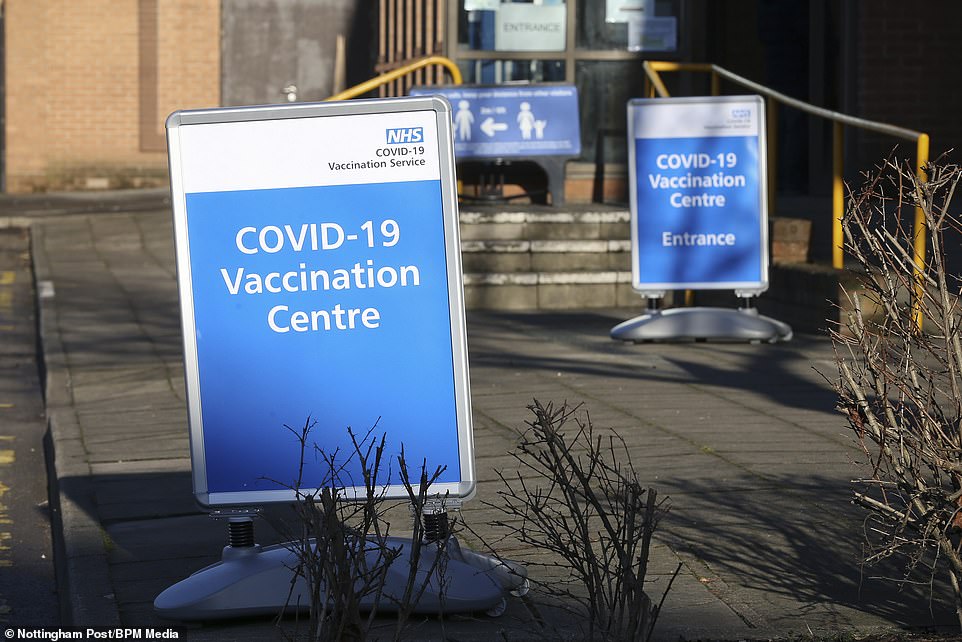 Patients have been missing Covid-19 vaccination appointments in Nottingham. Pictured above is the vaccination centre in Carlton, in the county