The last person to say farewell to the Queen: RAF servicewoman who was final mourner in line to see monarch lying in state says it was ‘privilege’ to be part of history (and went round TWICE to ‘do her justice’)

The last person to pay their respects to Queen Elizabeth II as she was lying-in-state at Westminster Abbey said it was an ‘honour’ to serve Her Majesty.

Christina Heerey, who currently serves in the Royal Air Force, was the last mourner to say farewell to the Queen before the gates shut at the cathedral early Monday morning.

Ms Heerey, of High Wycombe, said she was ‘very proud’ to be given the ‘privilege’ to pay her respects to the woman she ‘swore my allegiance to’.

The servicewoman went through the queue – which saw an estimated 400,000 mourners over the past five days – twice after she ‘didn’t feel as though I’d done it justice.’

Ms Heerey says she will be staying in London throughout the day to mark Her Majesty’s funeral which begins at 11am.

Up to two million mourners are expected to flock to London, Windsor and royal sites around the UK on the national bank holiday for the historic funeral, with the service set to draw an estimated 4.1billion TV viewers across the globe. 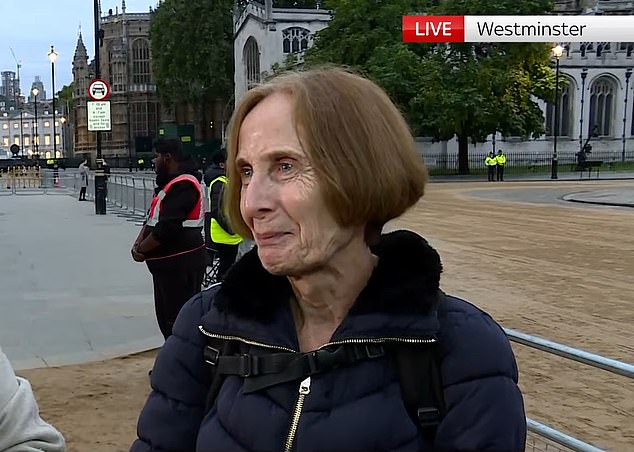 Christina Heerey, who currently serves in the Royal Air Force, was the last mourner to say farewell to the Queen before the gates shut at Westminster Hall early Monday morning 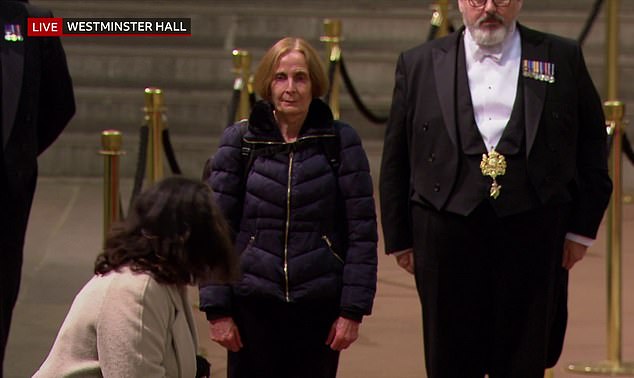 ‘It is honour,’ Ms Heerey told Sky News as after she was walked out of Westminster Hall, followed by parliamentary staff, around 6.30am Monday.

‘Obviously, I swore my allegiance to her and I just feel very proud being in the Air Force and being one of her subjects for her.’

Ms Heerey initially joined the queue Sunday around 5pm and walked past the coffin around 1.15am on Monday. She said she felt compelled to walk through again.

‘Walking into the hall the first time…I felt that I needed to go through again, so I just obviously came through last of all then,’ she said.

‘It’s so quick and it’s so momentous. I didn’t feel as though I’d done it justice.’

‘I just felt very proud that I was there and just very honoured, very honoured that I was given the privilege to go through again and obviously be the last person. I didn’t realise it was going to be like this.’

Ms Heerey, who travelled into the capital from nearby High Wycombe, said she was in the queue for about 14 hours but it was a ’14 hours well worth spent.’

‘Everybody gave each other room so they could have that final moment.’

The servicewoman said she it was ‘amazing’ to witness history, which she plans to keep doing as she remains in London for the funeral procession.

‘It will be a long day but well worth it,’ Ms Heerey explained. ‘I’m never going to do this again in my lifetime.’ 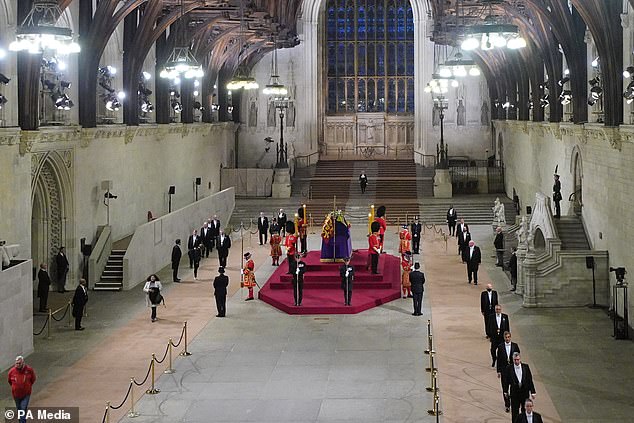 At 6.29am on the day of her funeral the final members of the public pay their respects at the coffin of Queen Elizabeth II in Westminster Hall, at the Palace of Westminster, London 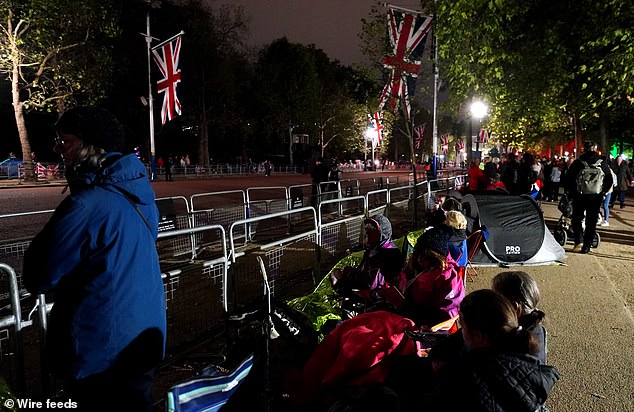 Members of the public secure their positions on The Mall in London, ahead of the funeral

Since Thursday, hundreds of thousands of members of the public have filed past the coffin until, early on Monday morning, the final people who had queued through the night left the cavernous medieval hall.

The process has seen a river of people snaking along the Thames around the clock, members of the public mixing with celebrities and foreign dignitaries beneath Westminster Hall’s hammer-beam roof.

By the end, the flow of mourners passing into Westminster Hall had slowed to a trickle as those at the back of the queue finally reached their destination.

Some were smartly dressed in sombre black coats, while others wore brightly coloured outdoor gear which served as protection against the chilly autumnal night.

Some bowed, some curtsied, others made the sign of the cross as they paused beside the coffin which was draped in the Royal Standard with the jewels in the Imperial State Crown, sceptre and orb, placed on top. 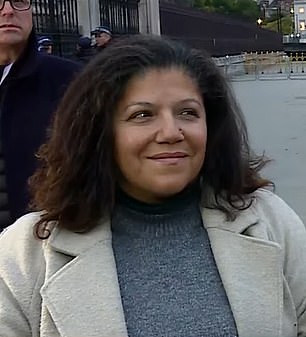 The second last person to see the Queen lying in state was Sima Mansouri, 55, (pictured) originally from Iran, who lives in South Croydon, South London

They passed through the hall in silence, with some pausing for one final look at the only monarch many of them have ever known before exiting into the dawn.

The silence was interrupted only by the changing of the guard every 20 minutes, the sound of military boots on the stone floor echoing off the walls.

The second last person to see the Queen lying in state was Sima Mansouri, 55, originally from Iran, who lives in South Croydon, South London. Her love for the Queen dates back to the 1970s, when her cousin was a flower girl for a royal visit in Tehran.

Ms Mansouri said: ‘It was a boiling hot day and my poor cousin has got very fair skin, blonde hair and blue eyes. The Queen came out of her plane and was more concerned with my cousin burning in the sun than being a royal.

‘She said, ‘Can someone please get this little girl out of the sun?’ Then she kissed her and grabbed the flowers. I thought it was amazing.’

Members of parliamentary staff and, finally, Black Rod Sarah Clarke were the final people to pay their respects after the last of those who had queued had been through Westminster Hall.

Can you guess which reality star this cute little schoolgirl turns out to be?