Oh ruddy hell! Firefighters spend HOURS ‘re-mooving’ cow’s head from a tree after it got stuck

Some things in life are just ‘udderly ridiculous’.

At least, according to the firefighters who spent a few hours trying to ‘re-moove’ a cow’s head from a tree after it got stuck.

The poor animal got itself stuck in the fork of a tree in Chilbolton Common, Hampshire on Wednesday night.

After receiving a call at about 7.40pm on Wednesday, the crew from Hampshire and Isle of Wight Fire and Rescue Service (HIWFRS) worked with an animal rescue adviser to cut the tree and free the cow by 11pm.

The service joked on Twitter: ‘The crew worked to re-moove the animal from the willow tree [on Wednesday] evening.’ 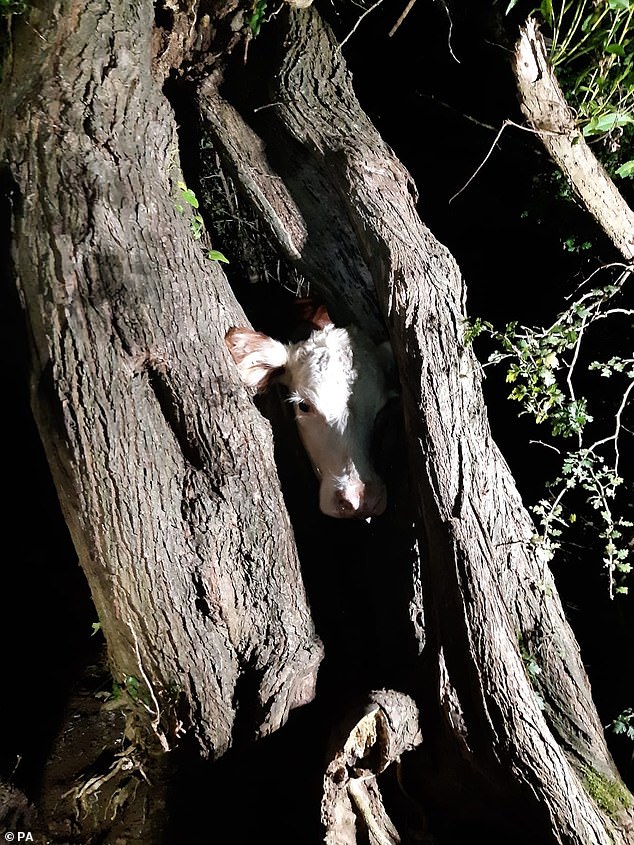 The cow had got its head stuck in the fork of a willow tree in Chilbolton Common, Hampshire

Two photos of the animal posted by the fire service showed front and rear views of the trapped cow as it stood waiting to be freed.

‘The animal rescue crew from Winchester worked to release the cow by enlarging the hole and manipulating the animal’s head until it was free from the tree.’

Confused by 5G? This is the podcast that will change that

How long will Trump be quarantined?