Revealed: Former Premier League star Greg Halford’s ex is a Mercedes executive who moved out of his £1m property after they split – after he was filmed ‘clearing out ex’s stuff’

Greg Halford’s ex-girlfriend, whose belongings he was seen throwing out of his £1million house, is a Mercedes executive who moved out of the house after they split.

The former Premier League footballer, 38, shared footage taken from outside the property showing a litany of boxes and a child’s BMX bike scattered across his front garden in Sutton Coldfield, Birmingham, on Saturday.

Kirsty Goh moved out of the luxury property following their split 15 months ago, MailOnline can reveal.

Neighbours of Halford today said he needs to get over Ms Goh, adding that they are surprised he is still ‘so obsessed’ with her given the time that has passed since their break-up. 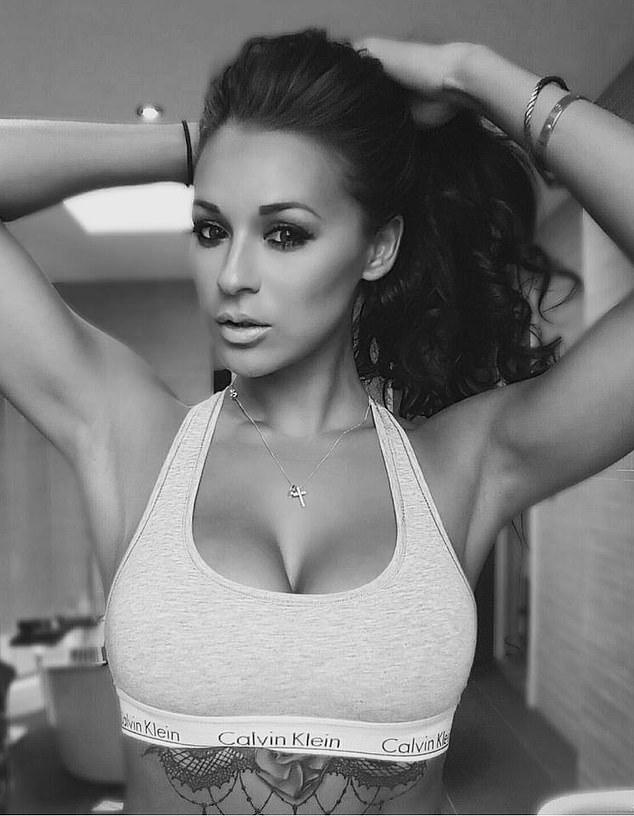 Kirsty Goh moved out of the luxury property following their split 15 months ago, MailOnline can reveal 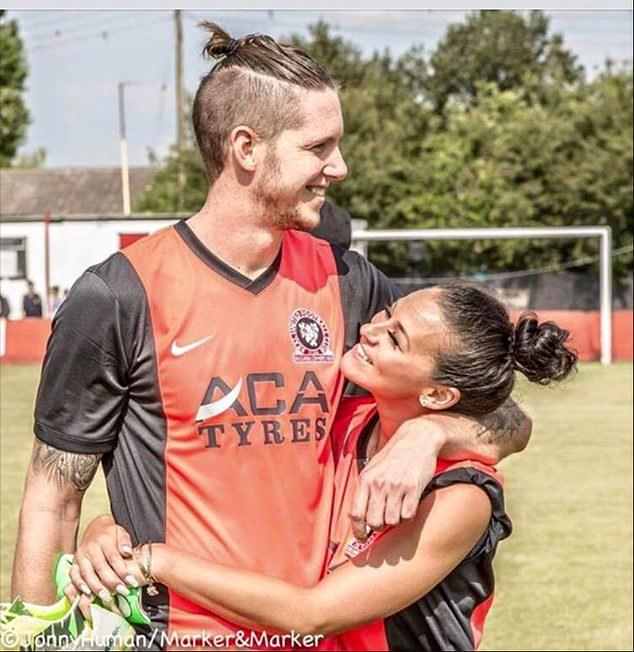 Halford pictured with his former partner Kirsty Goh, whose belongings he was filmed throwing out of his home 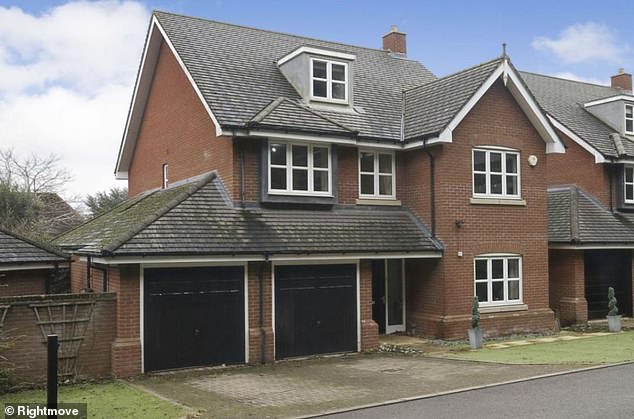 One resident said: ‘If I were her father I’d find that a bit disturbing that he is writing in this way about the girl.

‘No one has lived in that house for 12 months and his girlfriend Kirsty left 15 months ago.’

Neighbours on the exclusive, private development said that Halford returned to his five-bedroom detached house last week to complete a clear out before new owners move in.

He had a friend with him and a large hire van and told locals he was moving back to Essex. 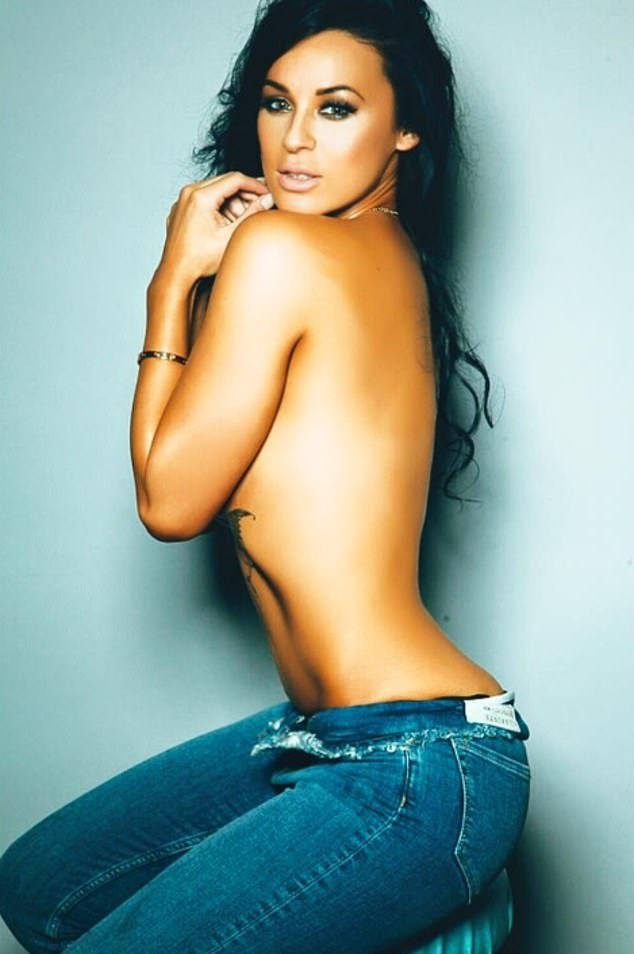 A neighbour revealed: ‘When she left it was in quite a hurry and he didn’t know it was happening. He came back and referred to her having “legged it” 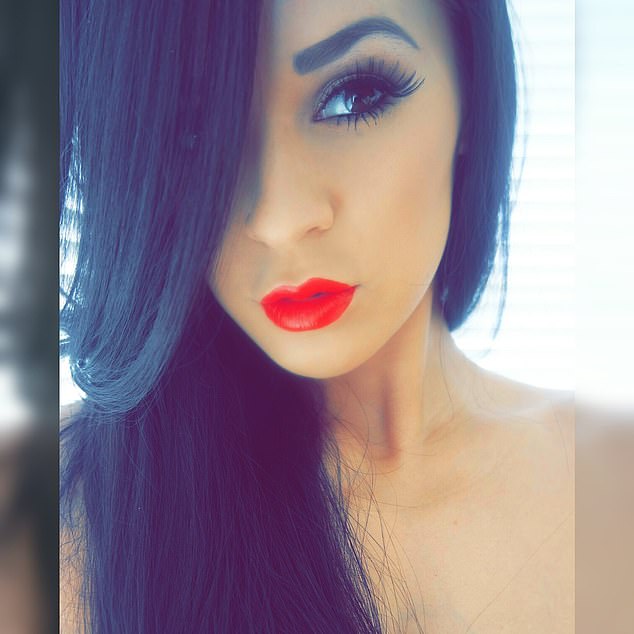 One added: ‘It must have been a stunt picture because those boxes were not there for long. They were all loaded up into a skip.’

Other items outside the property include two fridge freezers, a Samsung flat screen TV, a running machine and dozens of flattened boxes.

The neighbour added: ‘He has owned this house for a long time and for most of it, he lived there with Kirsty but then he started playing football in all parts of the country.

‘He went to Scotland, Ireland, Essex. He was never at home and, well, let’s be honest, she was an attractive woman in her 30s and her boyfriend was never there.

‘When she left it was in quite a hurry and he didn’t know it was happening. He came back and referred to her having “legged it”. 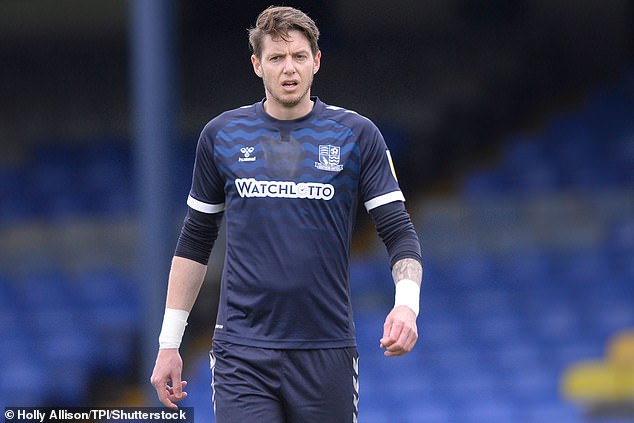 Greg Halford, pictured here playing for Southend United in May 2021, posted the bizarre video on social media on Saturday 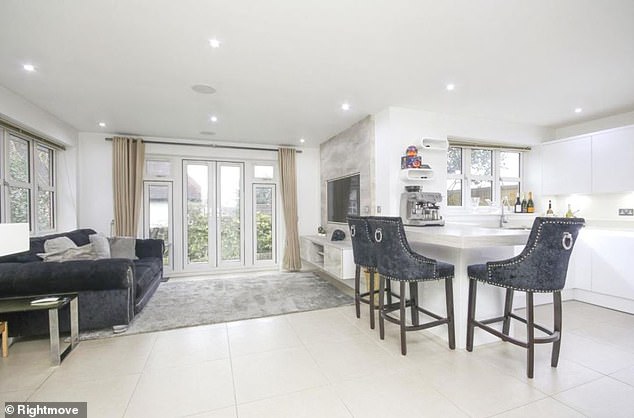 The interior of Halford’s property in Sutton Coldfield, Birmingham, which neighbours say he is selling 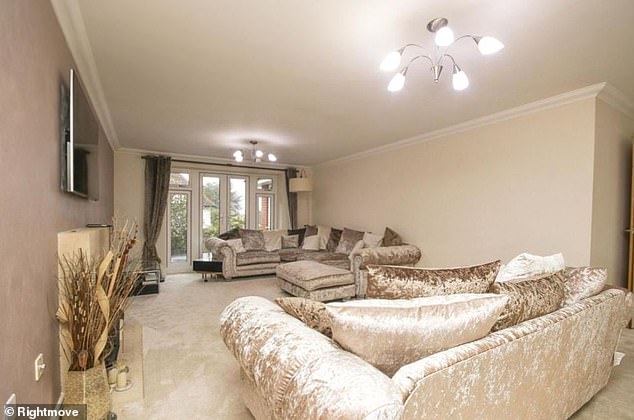 Halford had a friend with him and a large hire van when he returned to the property last week, neighbours say

‘To be fair to him, maybe he saw this house as their place and associates this house so much with her that he got upset clearing it out. That doesn’t excuse the video in my book. The language he used is not clever at all.’

He added: ‘He told me he was moving to Essex and starting up a new business. Then he asked me if I knew that Kirsty legged it. It was a surprise that he was still so wound up about it.’

Another neighbour was also shocked by his social media post, but is glad to see the back of him.

She said: ‘We had an unpleasant situation with his girlfriend Kirsty and we didn’t think much of him either.

‘Unbeknown to us, she had two vicious dogs living with her and one day they burst out and attacked our little bichon frieze when my husband was walking back with her.

‘One got our dog’s jugular and the other had its stomach. My husband was knocked over.

‘Kirsty was all upset at the time. She came with us to the vets, crying through her false eyelashes but then we heard nothing.

‘Other neighbours came to ask if our dog was alright but nothing from them. I sent them a copy of our vet’s bill which was over £3,000 and just got a cold text from him saying he had forwarded it to their pet insurers and I should deal with them.

‘I know she left a while ago and we aren’t sorry to see him go either.’

It comes after social media users were quick to claim that many of the shoeboxes seen in the video appeared to be empty.

One said: ‘Got to be a joke, not one of those boxes have anything in them. Protect the environment make sure to recycle,’

Another replied: ‘Just looks like a bunch of empty cardboard boxes lol. Was it fun throwing them out the window then going down to pick them all up and put them in the recycling bin?’ 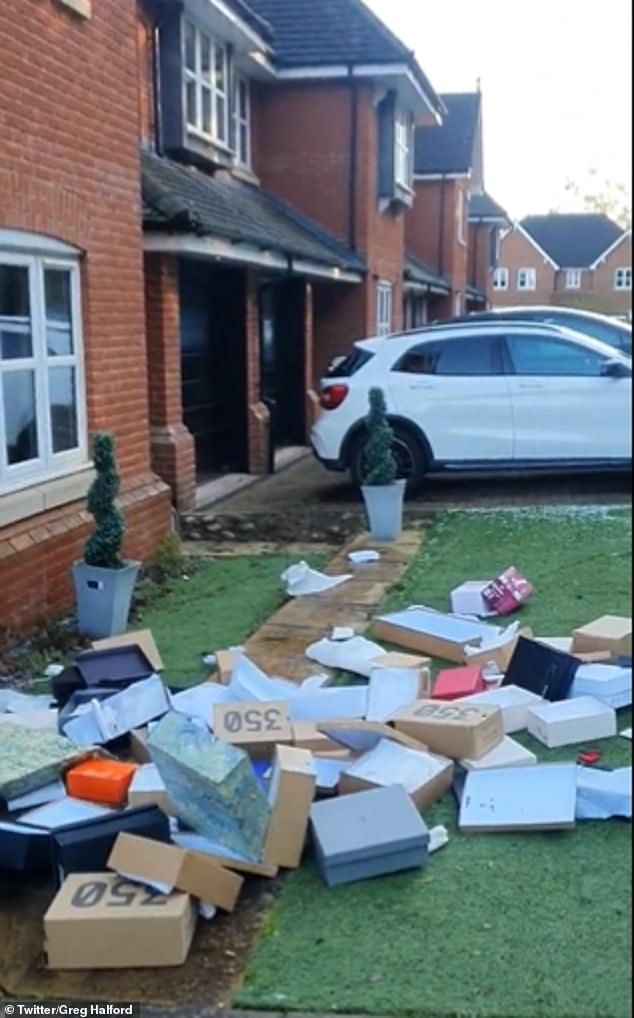 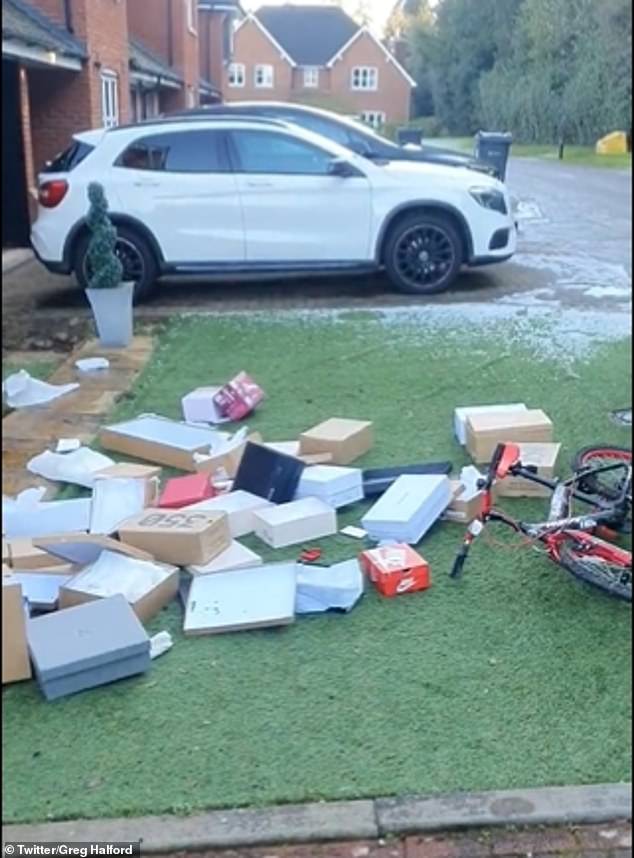 The boxes, which appear to be empty, sit next to a child’s BMX bike which is lying on the front lawn

Meanwhile, Halford was also supported on social media by fans and former teammates.

His former colleague Craig Fagan, who played with him at Colchester United, tweeted: ‘Hope your all good mate’.

Hashtag Tony added: ‘Sorry to hear that Greg. Keep your chin up.’

Others saw the funny side, with Reece Poole joking ‘still got a good throw on ye Greg’, a reference to his long throw ins while on the pitch.

Gez Campbell-Smith joked: ‘Based on how I’ve seen you play, I’m surprised you didn’t slice them about half a dozen gardens away’.

And Mark (@younglion1989) added: ‘Looks like Evri have finally delivered your parcels.’

Fans and former teammates of the footballer took to Twitter to express their support, while also looking on the funny side

The defender, who has played for 19 clubs in his 20-year career, is currently plying his trade at semi-professional Essex-based club Hashtag United.

He was known for his versatility on the pitch, having spent time playing as a right-sided midfielder, central midfielder, right-back and an emergency centre-forward at times.