Fraudsters cash in on scam holidays: Mother was conned into handing over £100 to fake caravan owner – as families are ripped off while looking for cheap summer deals amid cost of living crisis

Charities are warning of a surge in holiday scams after a despondent mother was left ‘absolutely gutted’ when she drove 160miles for her first family trip away only to discover she had been conned by a cruel scam.

Have you fallen victim to holiday scammers?

Amber was left feeling excited about her long-awaited family holiday after exchanging  messages and Facetime calls with the woman, who used the name Amiee and claimed to own an eight-berth caravan.

She paid the woman a £100 deposit and arranged to pay a further £200 when she arrived at the site.

She even received messages weeks ahead of the trip, asking her if she was excited for it to be going ahead.

But the family were left mortified after making the two-hour trip when they were abandoned at Skegness Sands caravan site when the caravan con artist failed to show.

Amber said: ‘We were waiting over two hours, we were just absolutely gutted. It was my son’s first holiday, we were right excited for this holiday.

‘We realised after about half an hour, we thought it was shady, we sent over 100 calls and messages and she was reading all of them and going offline. It’s beyond a joke.’

It comes as holidaymakers were warned scammers at home and abroad were advertising fake flights and false bookings to rake in thousands of pounds.

Data released by Lloyds Bank earlier this year revealed victims were losing an average of £2,955 each when being deceived by cheap flight offers, while those booking sham trips to hotels or caravan sites were also losing hundreds of pounds. 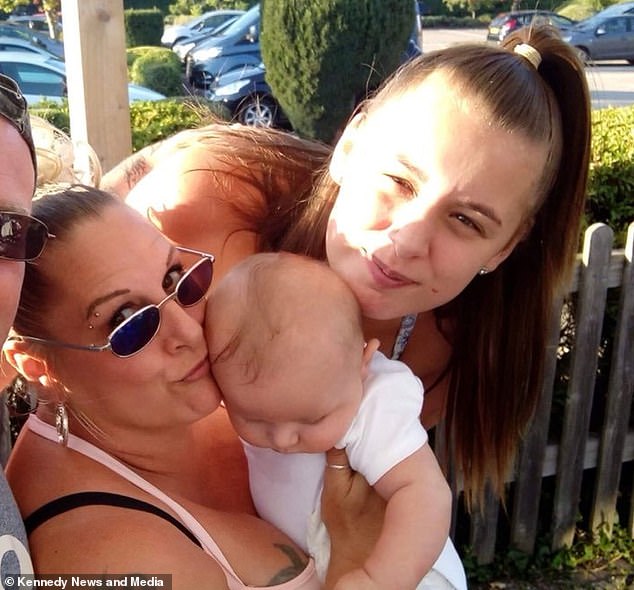 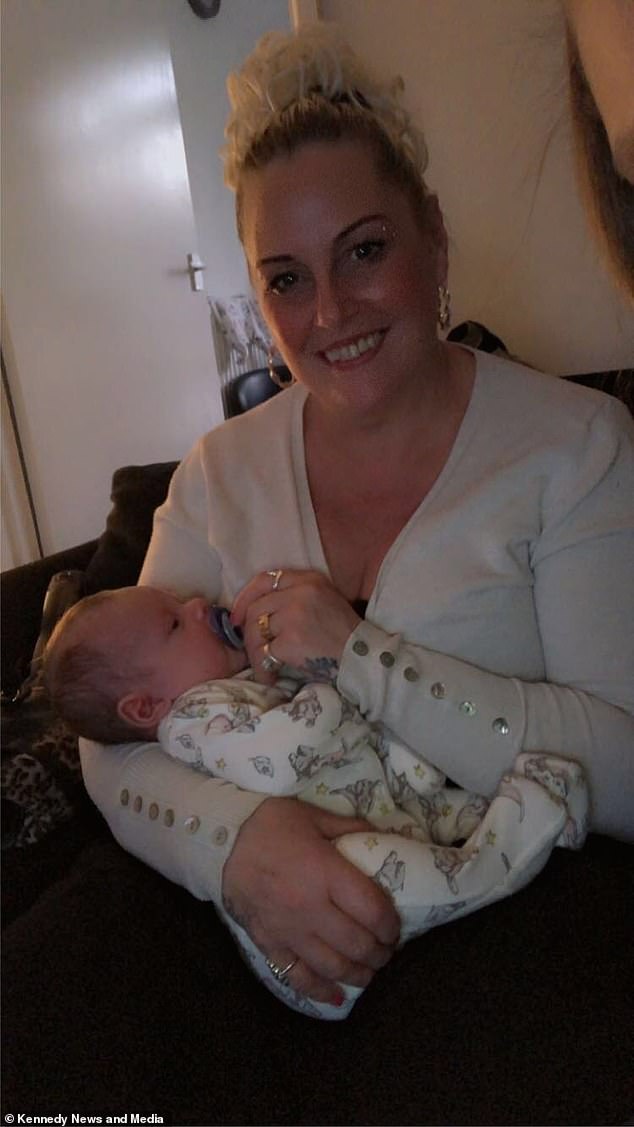 Ms Green, (pictured) who has Parkinson’s, and five-month-old Riley, also made the two-hour trip when they were abandoned at Skegness Sands caravan site when the caravan conman never turned up

After searching for staycations on Facebook, Amber decided to book the holiday as a treat for her, her mother and her young son.

Amber explained: ‘I looked at Skegness caravans because there are loads of pages where you can get caravans. I haven’t done it before but I have friends who rent out caravans so I thought it would be safe.

‘Amiee private messaged me saying she had a caravan so I asked for details, photos, location, everything.

‘She actually Facetimed me and mum and showed us a caravan she was doing up at the time. She was in a caravan [when she called].

‘She was texting me nearly every other day and was ringing me every so often to make sure we were coming and saying “I bet you’re looking forward to it”.

‘She was so tied up and knew what she was doing so we couldn’t tell that it was fake.

‘We told her we’d pay £200 on the day. She kept asking us when we paid it and we said on the day so we knew she wouldn’t rip us off and she said that was fine.’

But Amber warned that her family, who had been accompanied on their trip by one of Adele’s carers and his children, were left stranded at the static caravan park.

Texts between Amber and ‘Amiee’ that day reveal the trickster reassuring her that she was on her way to drop off the keys.

But the group were left waiting for two hours, after making the 160mile drive down from Doncaster, and leaving her devastated that her son’s first holiday was in tatters. 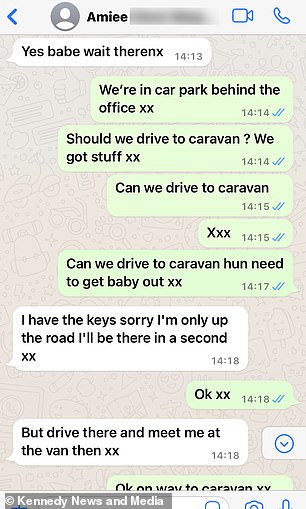 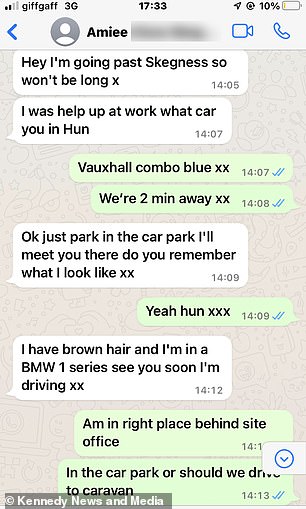 The woman who owns the phone that Amber received messages from denied she was called Amiee or that she had scammed the family.

She claims she’s being impersonated by someone using her number and her partner’s bank details and had contacted the police about the matter – though was unable to provide any crime reference number.

The woman admitted it was her in the pictures on the social media account – and Amber claimed the same woman in the photos had been who she had facetimed.

She said: ‘I’ve gone to the police myself, it’s not me, someone has used my number, they’re impersonating me. I’ve never video called the girl in my life.

‘It would have been them so it’s not even me and they’re using my pictures. I’m dealing with this myself through the police. I don’t even have a bank account myself to be using.

‘My number is linked to another phone so I’ve given that detail to the police and they’re going to find out who the real culprit is.’

However Skegness Sands, where the scammer claimed to have the caravan, had no sympathy for Amber and ‘questioned why she had packed up her whole family’ when they are a private owners-only site.

A Skegness Sands spokesman said: ‘We would just like to make it quite clear that Skegness Sands is in no way connected to the supposed owner that took Amber’s deposit.

‘I have contacted Amber to take down the address part of her post as this caravan belongs to a private owner and is in no way connected to the situation and I do not feel it is fair for their address to be vilified.

‘We received a phone call on 24th May to the office from a mother and daughter asking if we were a rental site as the lady said she had paid a deposit to an Amiee for a caravan and was checking they were legitimate – we told them that we are a non-rental site and just for private owners only so there was a very high likelihood that is wasn’t legitimate.

‘I’m not taking away the fact Amber has lost £100 but she was told back in May we were a non-rental site and she had her doubts then to ring us up.

‘We did not give her any reason to think that her dealings with Amiee were legitimate so why she packed her whole family up and made the journey needs to be questioned.’ 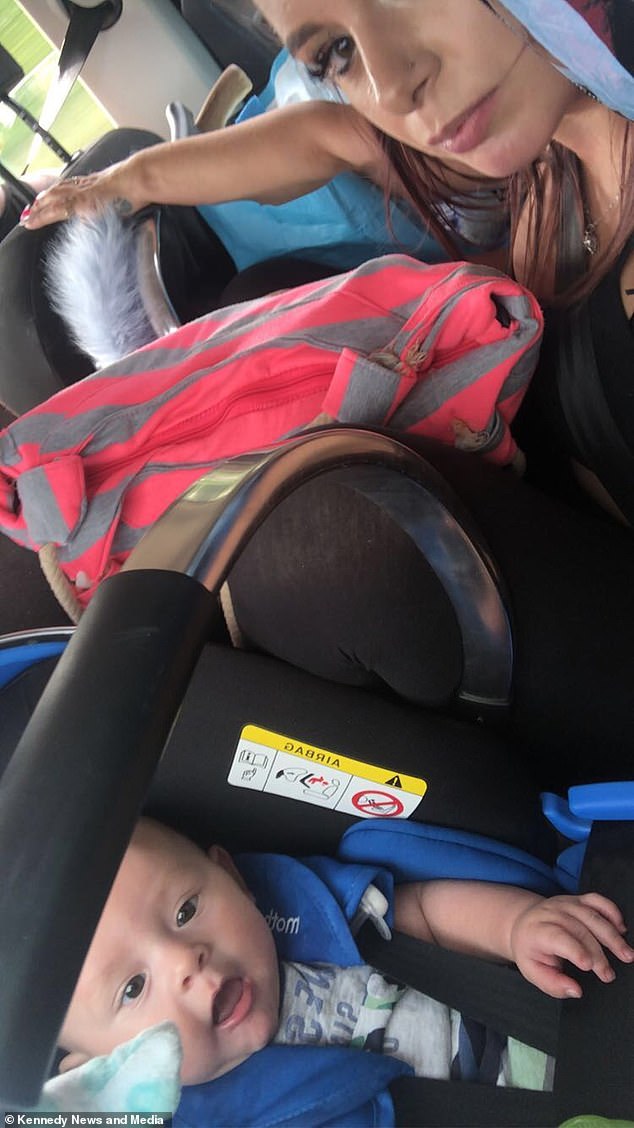 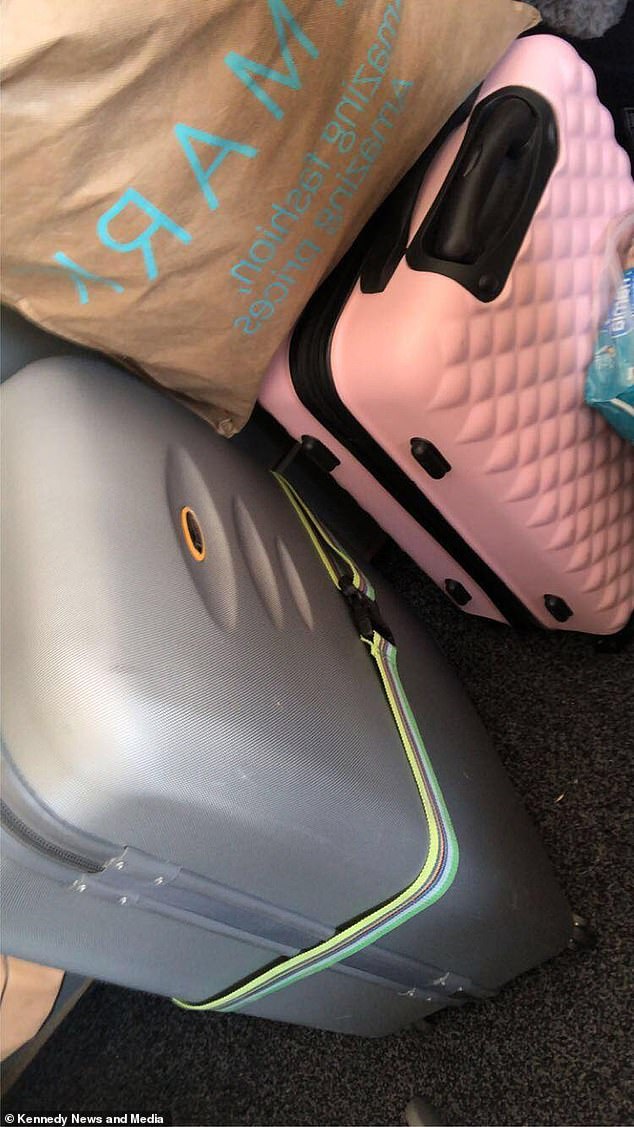 Pictured: The bags Amber packed before embarking on her 160mile and two-hour trip to a Skegness caravan park

HOW TO AVOID HOTEL RENTAL SCAMMERS

Trade body UK Finance earlier this year issued a warning to jet-setters to watch out for ticketing, travel and health insurance scams.

It said sophisticated phishing and fake social media adverts were on the rise as Britons begin hunting for holiday deals, while new street scams could take unsuspecting travellers by surprise in popular tourist destinations.

‘Scammers are ready to cash in on any last minute surge in bookings, so it’s vital that consumers know how to stay safe.

‘Book directly with trusted sites or travel agents, avoid following links on social media, and always pay by card for the greatest protection.’

It comes as dozens of holidaymakers were left in the lurch when they turned up at the London home of woman after scammers put her address on Booking.com.

The victim, who only gave her first name as Gillian, had been at home in the north of the city on July 4 when a woman and her daughter knocked on her door saying they had booked the property.

After turning them away she then had to deal with dozens of other people who knocked on her door throughout the month.

They had come from all over the world, with some travelling from as far away as Saudi Arabia and Australia, only to find the place they had booked didn’t exist.

Instead they had all been victims of a scam on Booking.com, where a fake listing duped them into thinking they had hired the woman’s home for their trip abroad.

Stars and Scars — You Be the Judge

Joel Edgerton Slips Into Tight Wetsuit for Dip in The Ocean!