‘Thank you Mamba’: From Philadelphia to the Philippines, Kobe Bryant fans build shrines to their fallen hoops hero following helicopter crash that killed 9 including his 13-year-old daughter

As much as anyone, Kobe Bryant helped to popularize basketball around the world, so it was no surprise to see shrines to the NBA legend erected everywhere from Philadelphia to the Philippines in the wake of Sunday’s fatal helicopter crash in California.

While Bryant’s widow Vanessa and their three surviving children mourn his and his daughter Gianna’s deaths, not to mention the other seven individuals who perished in the crash, basketball fans found solace gathering in public places to share their grief.

Los Angeles Lakers fans lit candles around the many Bryant murals that already dotted the city before his death. 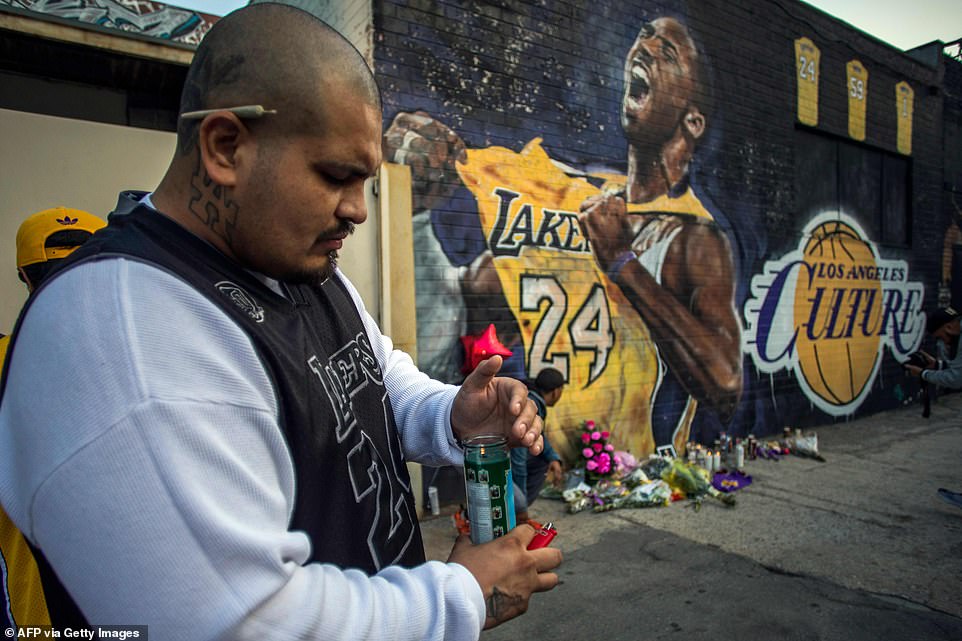 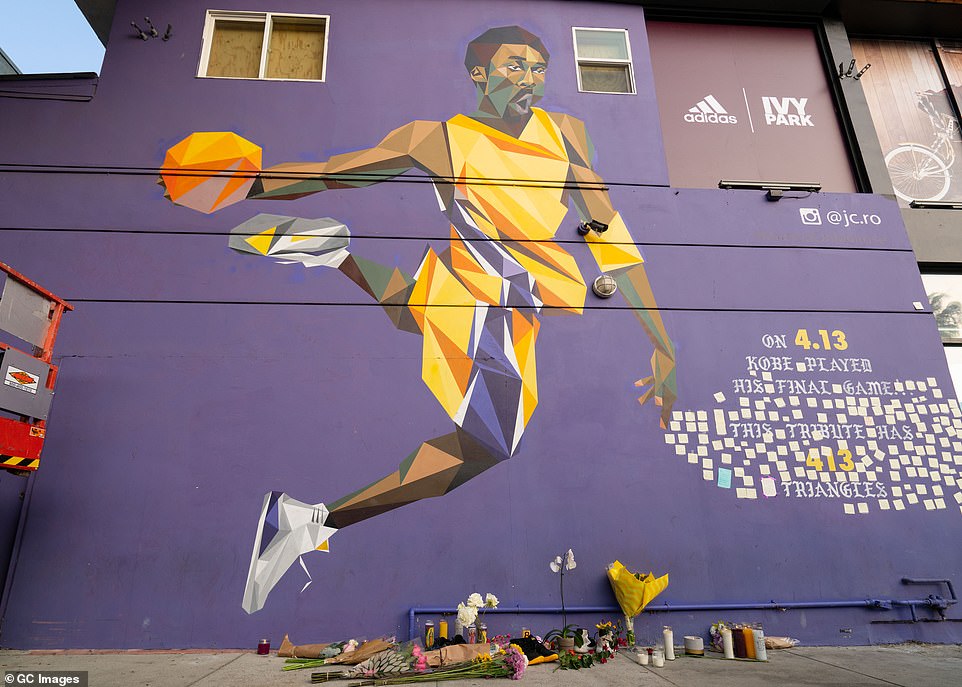 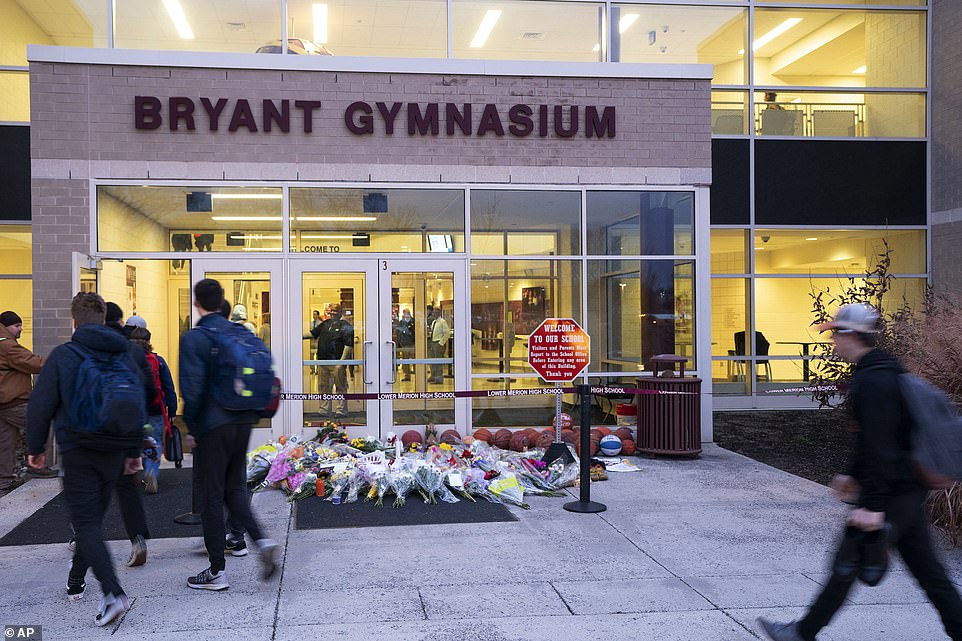 The Bryant Gymnasium at his former high school, Lower Merion outside Philadelphia, attracted mourners, many of whom lit candles or left flowers. Several others placed a basketball at the entrance to the gym 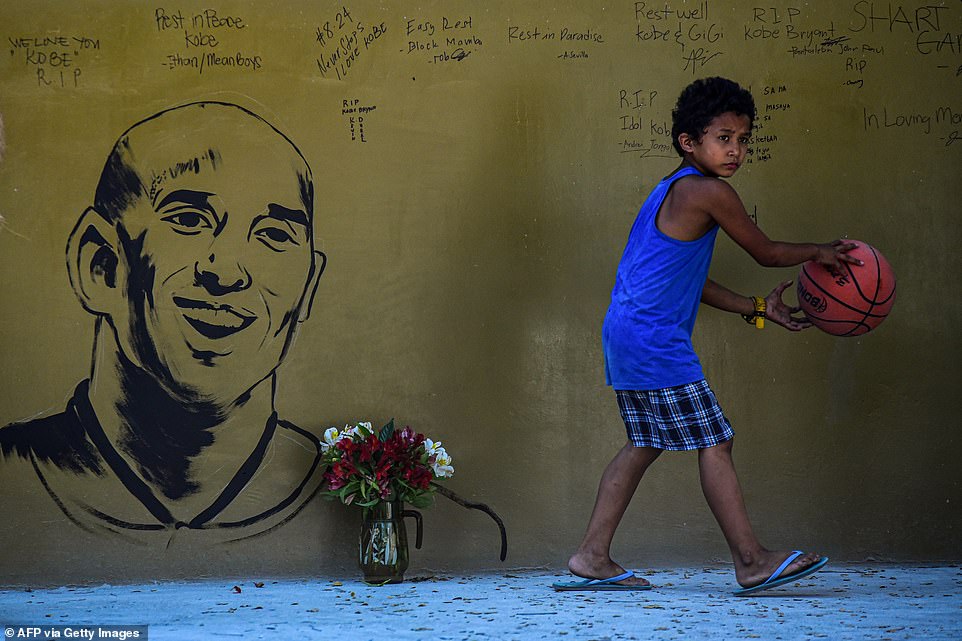 A boy with a basketball walks past a memorial wall for former Los Angeles Lakers basketball player Kobe Bryant following his death overnight in the US, near the “House of Kobe” gym built in honor of his 2016 visit to the Philippines. The gym officially opened on Sunday, before news of Bryant’s death had even made its way to the Pacific island nation 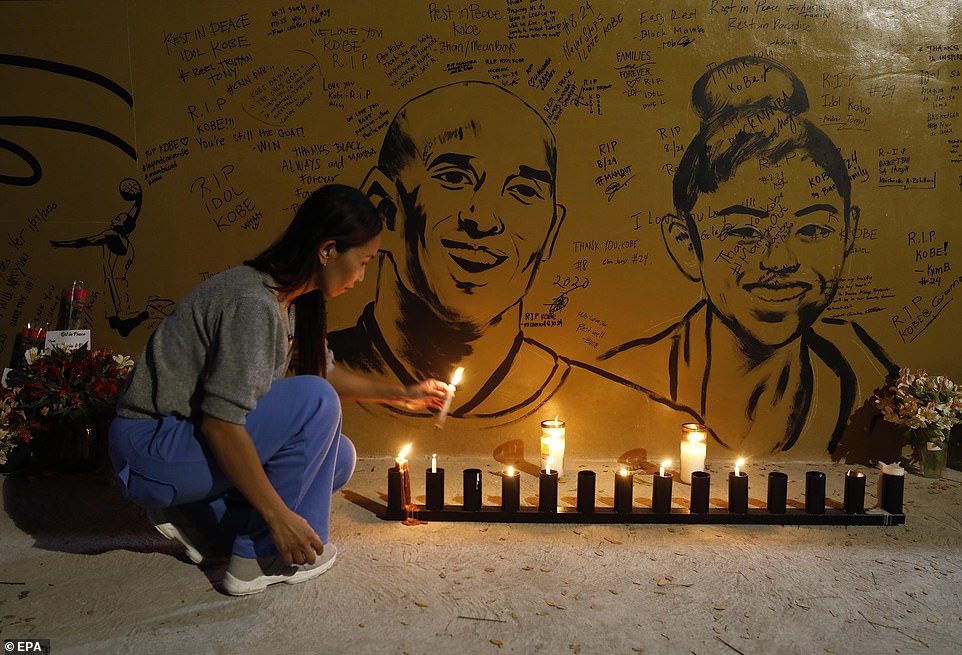 By Sunday night, the mural not only included Kobe Bryant, but his daughter, Gianna, as well. The 13-year-old also died Sunday

‘Kobe you were king of LA and legend of basketball R.I.P. bro,’ read a note attached to one such painting alongside a local shoe store on Melrose Avenue, according to the Los Angeles Times.

One employee was even handing out pends and Post-it notes for mourners to writer their tributes.

Other notes read, ‘thx Kobe for everything you are LA,’ and ‘thank you mamba for showing us what it means to be a champion.’

A 17-year-old named Jaxon Brown left a pair of Nikes at the shrine.

‘I wanted to leave them here in honor of him,’ he told the L.A. Times. ‘Kobe was like my hero growing up.’

‘It don’t seem real,’ said Shon Benjamin. ‘That’s our Michael Jordan. There’s many memories of him in my living room and his jersey on my body,’ he said. ‘He was the hero of L.A.’

‘Michael Jordan made it a business, Kobe made it a passion.’

Meanwhile several thousand fans felt compelled to go to the Staples Center, where Bryant starred for the Lakers over the better part of two decades.

In addition to the customary flowers and candles, many fans left their prized Bryant jerseys among the innumerable memorials circling the arena.

There were even flowers left outside Bryant’s Mamba Sports Academy, his California-based athletic training facility. 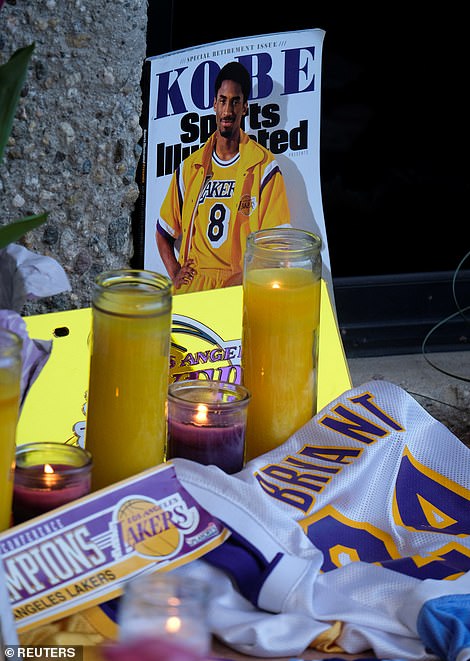 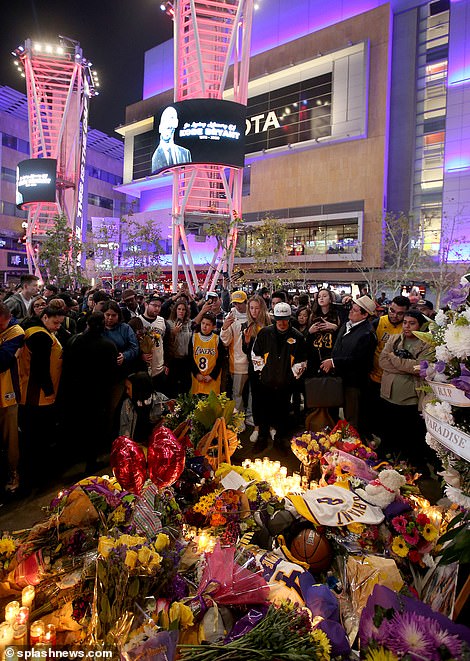 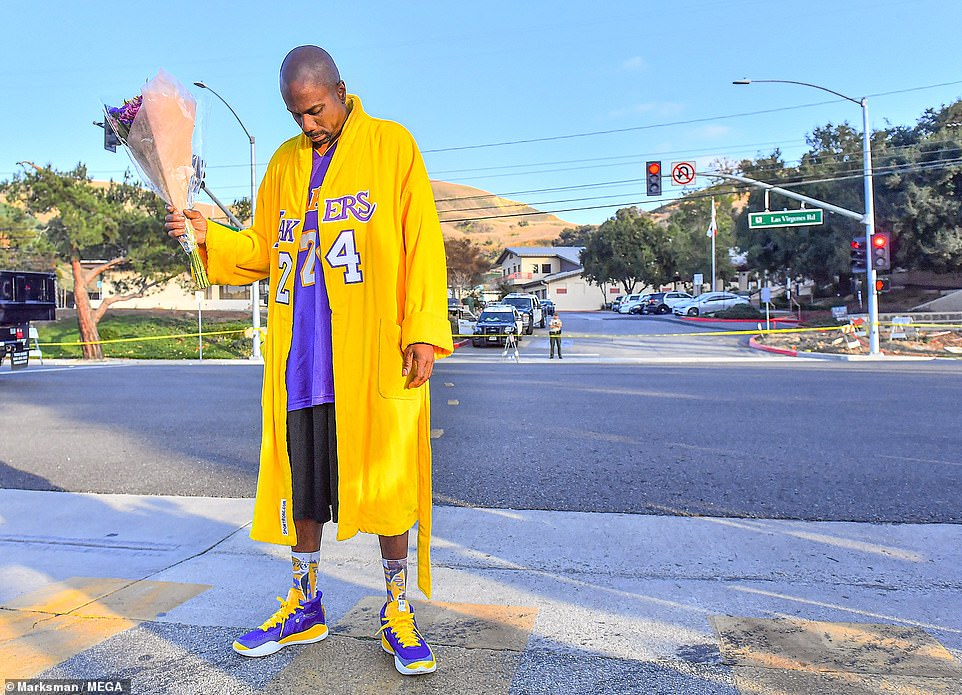 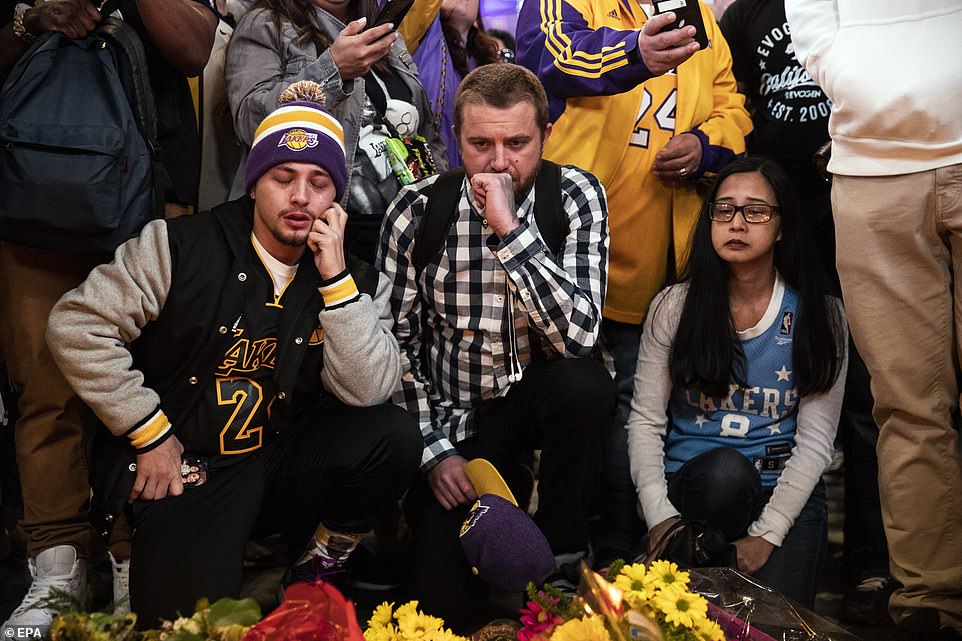 Lakers fans openly wept outside of Staples Center on Sunday, when the arena was scheduled to host the Grammy Awards 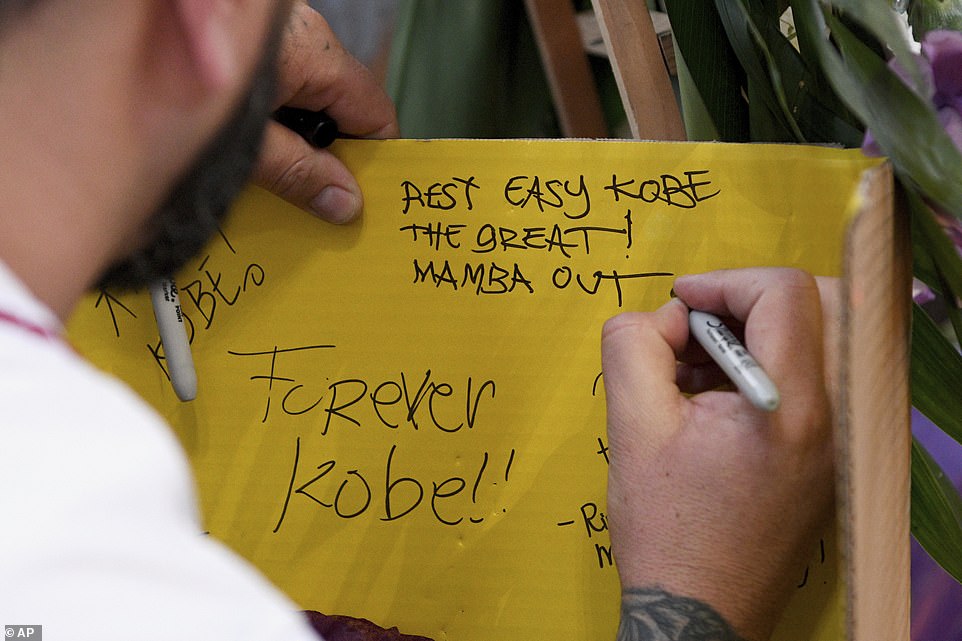 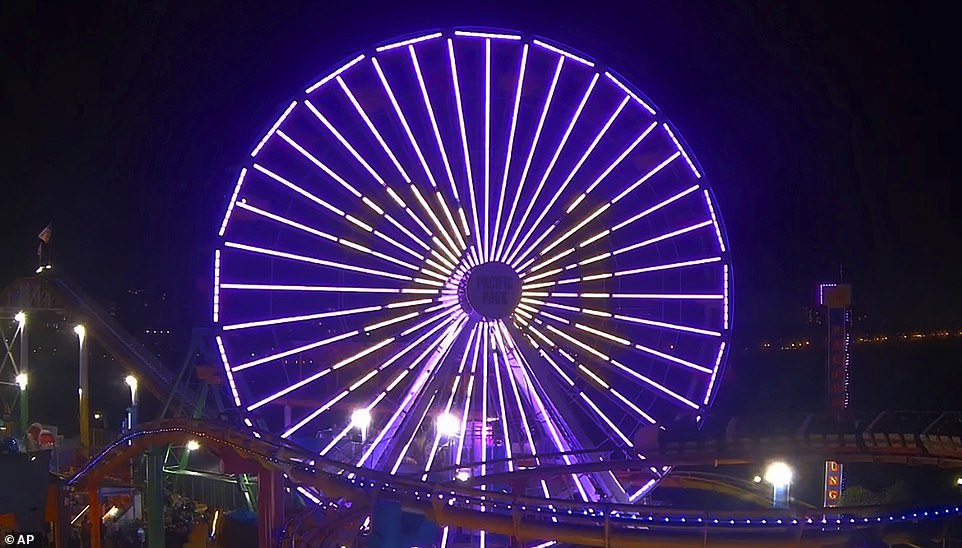 This photo provided by Pacific Park on the Santa Monica, Calif., Pier shows their Ferris wheel in Los Angeles Lakers purple and gold colors with Kobe Bryant’s No. 24 in honor of the former Lakers star 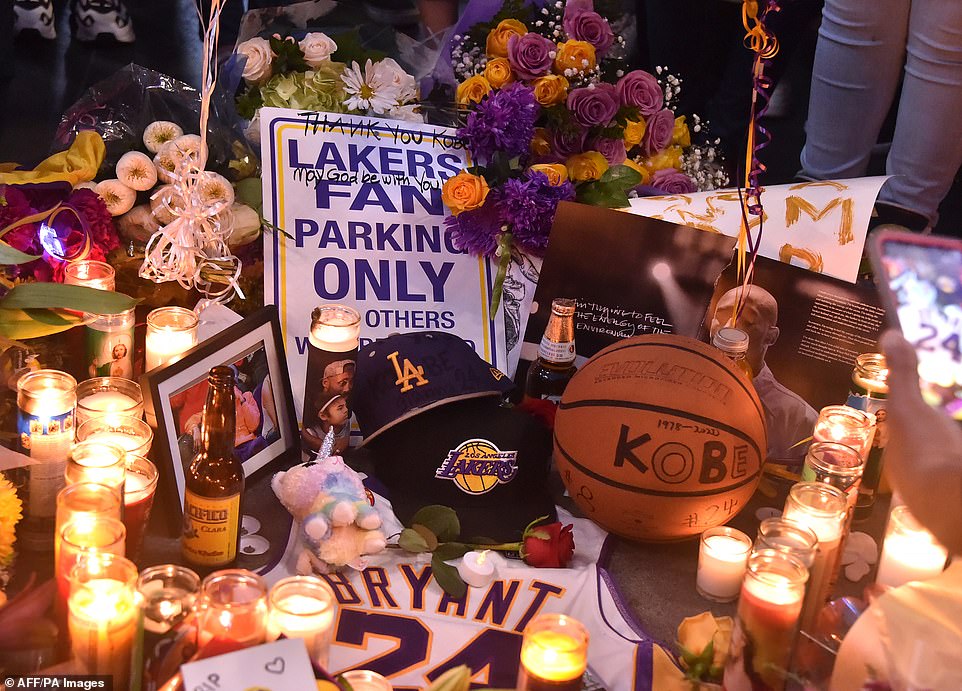 Naturally, the Bryant Gymnasium at his former high school, Lower Merion outside Philadelphia, attracted mourners, many of whom lit candles or left flowers. Several others placed a basketball at the entrance to the gym.

But Bryant’s impact was felt far beyond his real and adopted home cities.

In New York, someone used a roll of tape to write ‘Kobe’ above the ‘Bryant Park’ subway station sign.

And in the basketball-obsessed Philippines, one city actually opened a new community center and basketball court dubbed, ‘The House of Kobe,’ hours before his death was even reported.

The hope, according to the AFP, was that Bryant would eventually visit the arena, which is adorned with several Kobe murals.

‘We hoped he would get in touch with us… We have a “House of Kobe” for you,’ said Eric Martinez, the congressman behind the project in Valenzuela City, which is part of Manila’s sprawl.

‘Just to see him would have meant something for basketball-crazy fans.’

On Sunday, a mural of Bryant’s daughter Gianna was added alongside the image of her father.

Philippine presidential spokesman Salvador Panelo noted that Bryant had been a frequent visitor to the Philippines. ‘He was well-loved by his Filipino fans,’ Panelo said in a statement.

‘On the hard court, he was a sight to behold with his dexterity and accuracy in sinking that ball in the ring. He was a master of his craft. The basketball world has lost one of its legendary greats,’ Panelo said. ‘The Palace extends its deepest condolences to the family, friends, colleagues, loved ones and fans around the globe who Kobe left behind. We share in their grief.’ 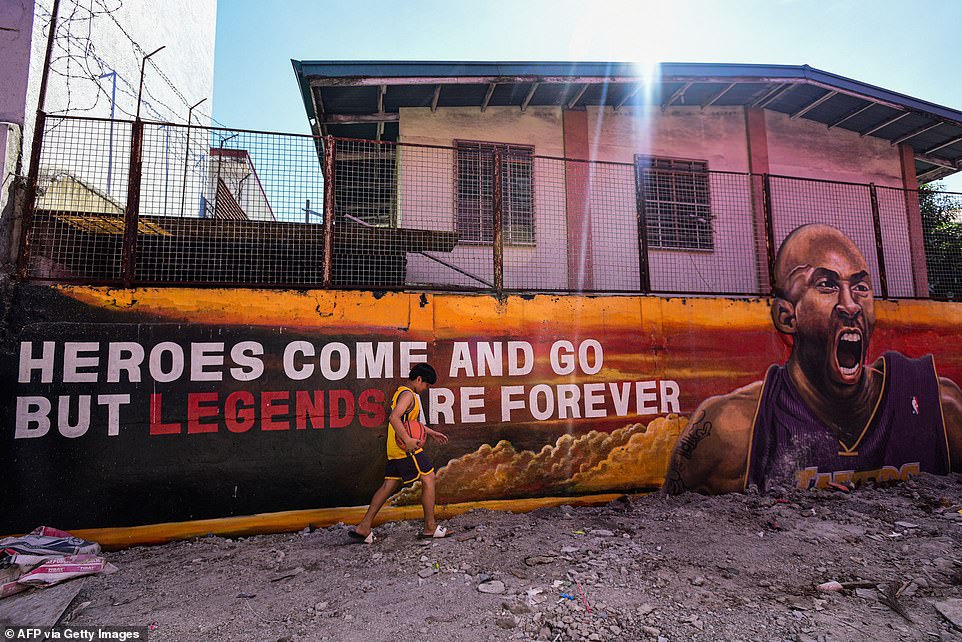 Reaction in China was immediate, even during a complicated time between the country and the NBA.

The Chinese Basketball Association, led by former Rockets MVP Yao Ming, announced it would suspend all cooperation with the Texas-based team. Yao and the association have yet to comment on the crash Sunday in California that killed Bryant, his daughter Gianna and seven other people.

However, Yi Jianlian, the other Chinese player who played in the NBA, took to China’s Weibo micro-blogging site to praise Bryant for teaching him the value of persistence.

‘Thank you! Kobe! Hope father and daughter continue to enjoy basketball in heaven! We will always remember you!,’ wrote Yi, who signed with six different NBA teams, including briefly the Lakers in 2016. ‘Rest in peace to the legend,’ he added in English.

Bryant’s popularity among Chinese fans was rivaled only by Yao, LeBron James and Michael Jordan.

His playing appearances, including the 2008 Beijing Summer Olympics won by the U.S., were far exceeded by his promotional appearances in the country, both on behalf of his own brand and basketball generally. At a 2013 Lakers preseason game against Golden State in Beijing, the arena rang out with chants of ‘Kobe! Kobe!’ despite the injured superstar not even having suited up for the game.

Commemorations begin rolling in online, many of the accompanied by photos of Bryant and his daughter Gianna with the letters R.I.P. Others showed the two dressed in uniform walking away into clouds under a basketball net. 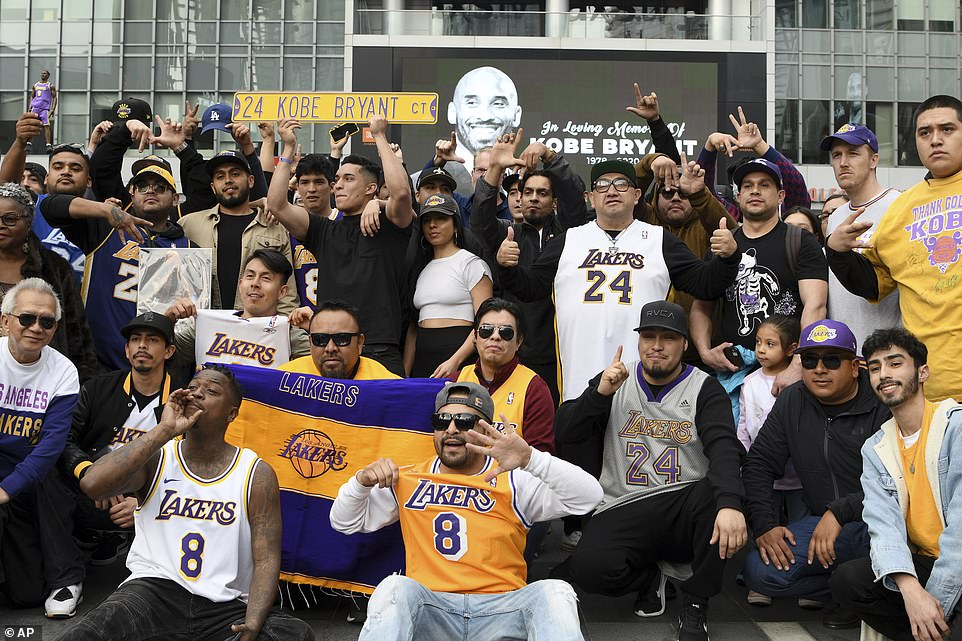 Unlike Lakers stars such as Shaquille O’Neal, LeBron James, Wilt Chamberlain or Kareem Abdul-Jabbar, Bryant played his entire career with the franchise, which is one reason fans felt particularly close to him after watching him for 20 years

‘For our generation, our memories of the NBA begin with Jordan, and move through Kobe and Yao Ming. You were a part of our youth. Already missing the bright sun of Kobe. Go well,’ wrote commentator ‘ZhanHao’ on the popular Twitter-like Weibo messaging service.

‘Your willpower has inspired a generation. Thank you,’ wrote ‘Teacher Kai Ting.’ ‘I hope there is basketball in heaven. Kobe just went to another world to play basketball with his daughter,’ wrote ‘Cici’s green paper.’

In Taiwan, where the NBA also is an enormous draw, President Tsai Ing-wen tweeted that her ‘thoughts go out to the Bryant family & the families of all those who lost loved ones today.’

‘Kobe inspired a generation of young Taiwanese basketball players, & his legacy will live on through those who loved him,’ Tsai wrote.

‘He helped make Kobe Beef known throughout the world,’ he said in a telephone interview with The Associated Press Monday.

Kobe got his name, the legend goes, after his father ate Kobe beef during a visit to Japan and loved the taste.

Tanimoto, who watches NBA games on TV but has never met Bryant, said people know the story about how Bryant got his name.

‘We have always felt a closeness to him,’ he said. ‘It is so sad. And we offer our deepest condolences.’ 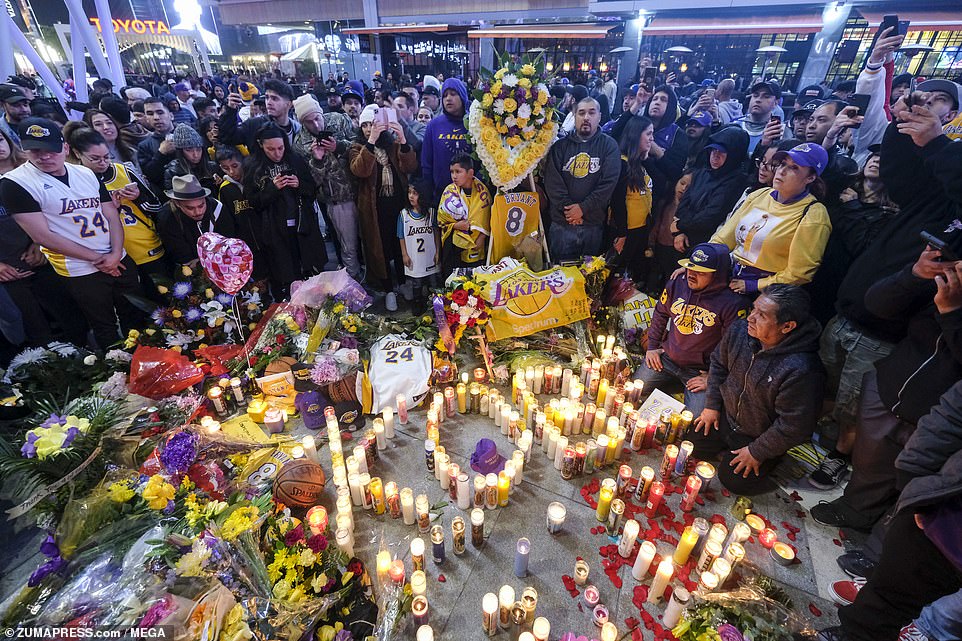 Fans gather at a memorial for former NBA player Kobe Bryant at L.A. Live, outside of the Staples Center in Los Angeles 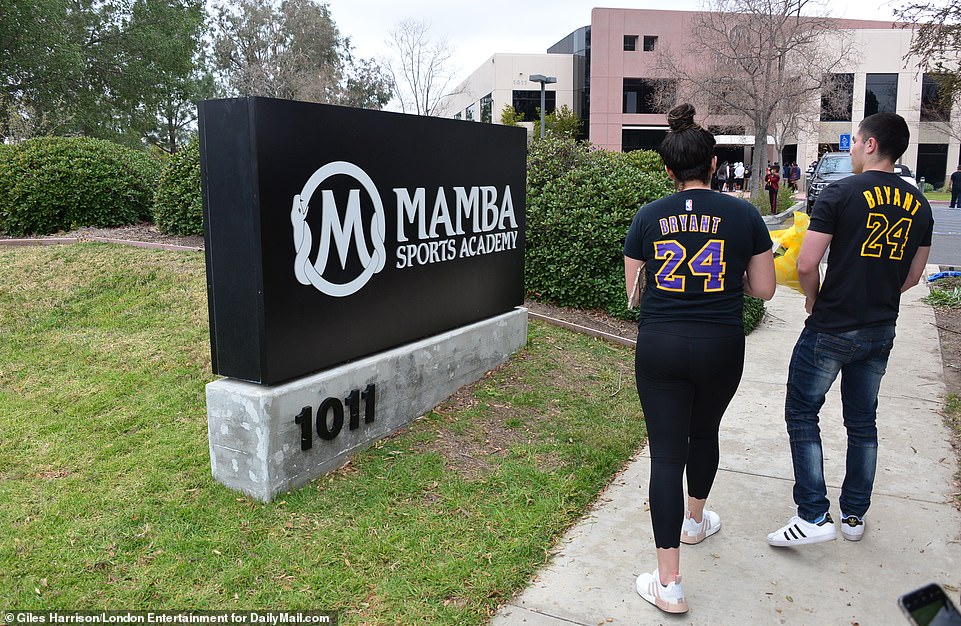 Fans dressed in their Kobe Bryant jerseys show up at the Mamba Sports Academy on Sunday, where the NBA legend was reportedly on his way before his helicopter crashed, killing the 41-year-old, his daughter Gianna, 13, and seven others