The headteacher of a school has come under fire from outraged parents after sharing an ‘offensive’ photo of herself posing in a wheelchair on Facebook.

Parents and guardians of Stenson Fields Primary Community School, in Derbyshire, have said that headteacher Jo Sadler’s actions are ‘highly inappropriate and disappointing’.

Comments posted under the image were also offensive, according to the group of parents, and were of a ‘derogative nature’ as they put special needs in a negative connotation. 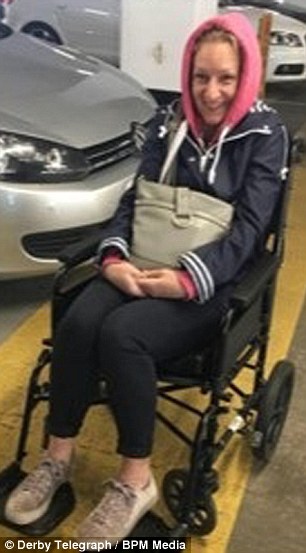 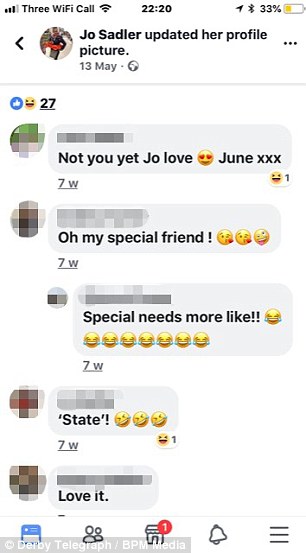 Parents and guardians of Stenson Fields Primary Community School, in Derbyshire, have said that headteacher Jo Sadler’s actions in posting the picture (left) were ‘highly inappropriate’

However, Mrs Sadler said that the picture was taken when she was helping a disabled friend and was in no way meant to offend.

She said that she sincerely apologises for the distress it caused.

The headteacher first uploaded the photo to Facebook as her profile picture on May 13 this year.

It shows Mrs Sadler sitting in a wheelchair with a pink hood up, holding a beige-coloured bag. She is smiling towards the camera.

On it, a number of Mrs Sadler’s friends commented ‘Oh my special friend!’ and ‘Special needs more like!’.

On July 3, the Parents and Guardians of Stenson Fields Primary Community School group sent a letter to the school, asking to make a formal complaint as they found the post to be offensive. 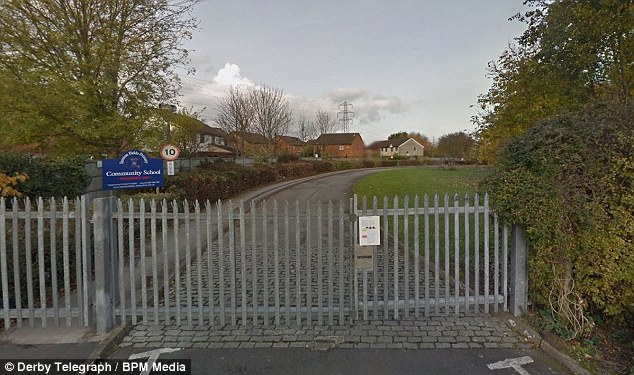 However, Mrs Sadler said that the picture was taken when she was helping a disabled friend and was in no way meant to offend (Pictured: The school)

It says: ‘We would like to make a formal complaint about an image that has been brought to our attention from Facebook of the Headteacher, Jo Sadler.

‘It does not paint a professional or inclusive image for the school.

‘The comments below which are also public are also of a derogative nature and put ‘special needs’ in a negative connotation.

‘Both the image and comments coupled together comes across as insensitive and unprofessional.

‘Furthermore, it is highly offensive towards parents of children with disability and using wheelchairs at school, of which there are a few, who have seen it as well!’

The group also said that they want the issue to be dealt with seriously as a case of professional misconduct.

It said in the letter: ‘This is a poor representation of leadership and puts Stenson Fields Primary School into a negative light, as Headteacher she should have known better to have an image and comments like this on such a public domain, where it is accessible to any person quite easily.’

When asked about the incident, Mrs Sadler said: ‘The picture in question was taken while I was helping a disabled friend during a recent day out.

‘It was published on my personal Facebook account as a memory of that day and in no way intended to offend.

‘I have removed it from my account and I sincerely apologise for any upset or distress it may have caused.’

Our Favorite Tote Bags of 2020 for Your Every Need

Beyoncé Makes a Show-Stopping Appearance at the 2020 Super Bowl