A banker and his wife are suing a tradesman for £200,000 after claiming he arranged for their multimillion-pound French Riviera villa to be burgled.

Ivan Ritossa and his lawyer wife Marina claim CCTV installer Bruce Pearce, from Kent, arranged for their sprawling holiday villa in Saint-Jean-Cap-Ferrat to be broken into ‘as an act of spite’ on November 30, 2019.

They claim the tradesman, who was hired to install the security system at their property, organised the burglary after developing an ‘irrational animosity’ towards Mrs Ritossa after clashes over his final unpaid £8,000 bill.

The couple, whose also own a £10million Chelsea mansion, are suing Mr Pearce and his company Elegant Integration Ltd for £58,592.43 in damages, plus lawyers’ costs of over £145,000, Central London County Court heard.

But Mr Pearce is defending the claim, which he calls ‘outlandish and speculative,’ claiming it was born out of a ‘grudge’ Mrs Ritossa developed towards him.

He is also countersuing the wealthy couple for payment of his £7,820.16 final invoice. 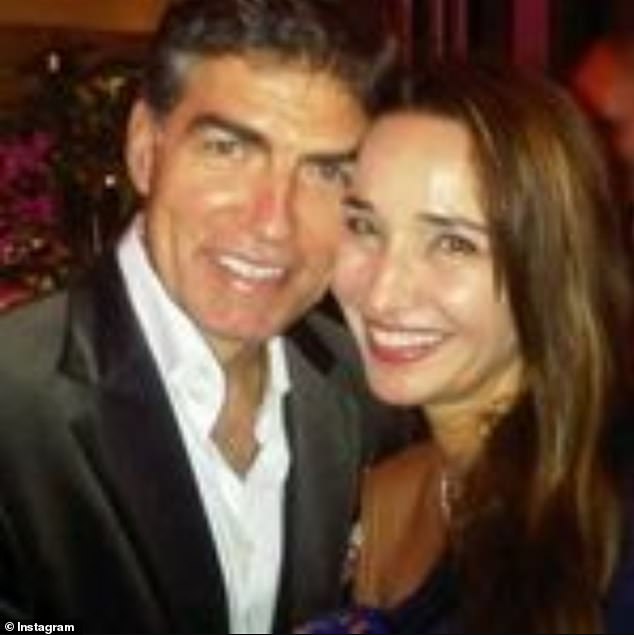 Ivan Ritossa and wife Marina (pictured together) claim CCTV installer Bruce Pearce arranged for their holiday villa in France to be broken on November 30, 2019 and are now suing him

Mr Wibberley told the court that there was ‘a break-in at the claimants’ property in France in 2019 during which a security system and other items supplied and/or installed by the defendants were damaged and/or stolen.

‘The claimants believe that the break-in was perpetrated by – or on behalf of – the defendants as an act of spite following Mrs Ritossa’s refusal to pay Mr Pearce’s final invoices,’ he explained.

He told the judge that, after hiring Mr Pearce in 2018 to install the security system, relations ‘deteriorated’, with Mrs Ritossa complaining the work had not been completed and the system did not function correctly.

Mr Pearce for his part refused to carry out any more work until he had been paid up front.

In November 2019, the break-in occurred and Mr Pearce emailed the couple shortly afterwards, saying he would not be doing any more work for them.

The barrister told the judge that the burglary involved ‘the disabling and removal of the security system, door entry system and Sonance speakers supplied and/or installed by the defendants’.

‘Nothing was taken except items installed by Mr Pearce,’ he said.

‘The intruder was also able to remotely access, disable and delete the library of CCTV recordings.

‘The claimants believe that the break-in was committed by Mr Pearce and/or a person or persons acting under his direction.

‘It is the claimants’ case that Mr Pearce was the only person capable of erasing the direct evidence of the perpetrator committing the break in.’

He continued: ‘Rather than simply denying responsibility for the break-in, the basis of the defendants’ defence is that Mrs Ritossa has had some sort of mental breakdown causing her to invent the matters that form the subject of the claim.

‘The way in which the defendants have attacked Mrs Ritossa – attacks that go far beyond anything that could be considered necessary or even relevant to their defence – shows a clear and irrational animosity towards her. 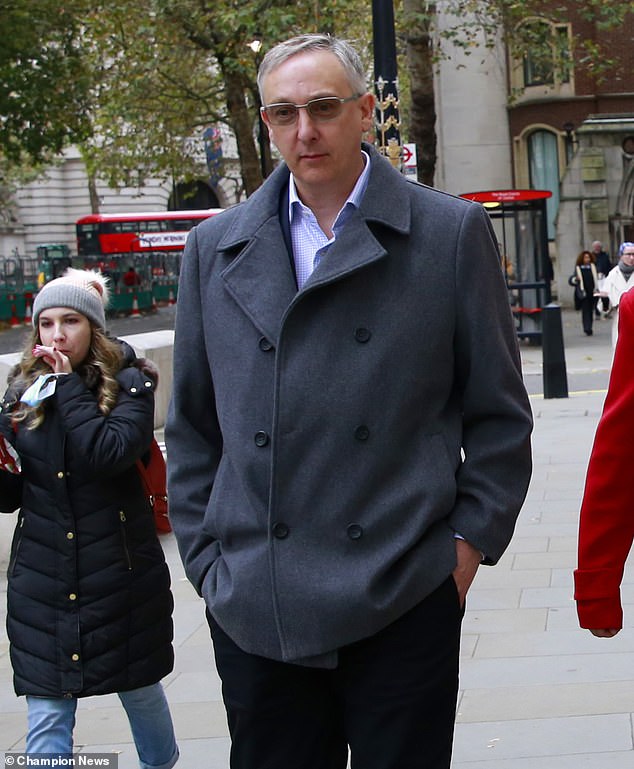 CCTV installer Bruce Pearce, from Kent, is defending the claim, which he calls ‘outlandish and speculative’ 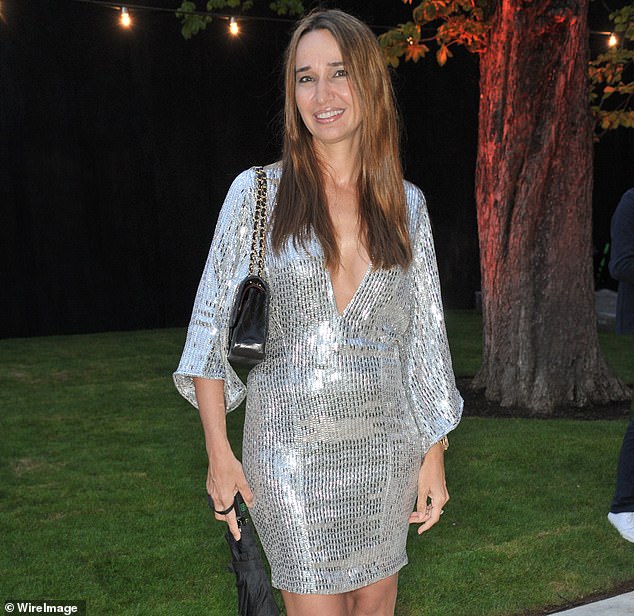 ‘This comes across not just from Mr Pearce’s contemporaneous description of feeling that he had been ”shafted” by Mrs Ritossa, but also from the highly personal and vindictive nature of his evidence,’ he added.

The barrister said Mrs Ritossa had also faced allegations that she was ‘erratic, rude, hysterical and appeared unstable/unbalanced,’ adding that Mr Pearce’s ‘contempt for Mrs Ritossa was palpable’.

Mr Wibberley continued: ‘The court will form its own view of Mrs Ritossa’s evidence and whether it is really plausible that she has invented the break-in as a result of a mental breakdown caused by being chased for circa £8,000.

‘For the reasons outlined above, the court is invited to enter judgment for the claimants in the sum of £58,592.43, plus costs on the indemnity basis.’

But Rowan Pennington-Benton, representing Mr Pearce, denied the claim, saying that there was no direct evidence to suggest the tradesman was behind the raid.

He said: ‘Mr Pearce vehemently and wholeheartedly denies this and views this claim as an unmeritorious, intimidatory tactic by wealthy property owners who have wrongly formed the view that he has broken into their property.

‘He understands they are angry but maintains that they are simply wrong and should not have pursued him in this way.

‘Mr Pearce, who is a hard-working trader of modest means, feels that he has had little choice but to defend his position, albeit that the financial and emotional strain has been significant. In the end, he does not feel he can admit to things he has not done.

‘The defendants categorically deny these allegations and submit that a sophisticated intrusion and burglary of the claimants’ property, in a foreign country, as a result of unpaid invoices in the sum of £7,820.16, is outlandish and speculative.

‘No direct evidence has been produced, of any kind, showing the defendants were involved – in any capacity – with the alleged break-in. The entirety of the claim is therefore purely based on speculation, inference, and supposition.

‘The property is a second – or more – home. It is clear that any number of persons had access to the property, knew the layout and security system, and when Mr and Mrs Ritossa would not be home.

‘These include variously at different times caretakers, gardeners, builders, security and so on. This provides an extremely weak basis upon which to build a case which is constructed entirely of inference.

‘It is incredible and implausible that Mr Pearce engineered a complicated intrusion and burglary in a foreign country over an unpaid invoice.

‘The claimants have on numerous occasions claimed that the alleged intruder was able to access the cloud drive holding all CCTV recordings and delete them, and that only someone with the administrator username and password would have been able to do this. They have also stated that Mr Pearce was the only person with the administrator username and password.

‘However, the defendants have produced evidence which clearly demonstrates that Mrs Ritossa was provided by Mr Pearce with administrator access to the CCTV equipment, which she could access both internally at the property, and remotely.

‘Those details could and indeed very likely were provided to others, for periods when she was not home, i.e. for the periods she and her husband are in the UK.

‘It is clear from inter-party correspondence and the evidence filed that Mrs Pearce in particular holds a very dim view of Mr Pearce, what might be called a ”grudge”.

‘Contemporaneous correspondence at the very least also indicates a short tempered and somewhat erratic approach to disputes. It is not clear the extent to which these factors are clouding judgment as to the real possibilities and likelihoods in this matter.

‘The inference is that this claim is borne of spite and resentment, as opposed to a rational and proportionate assessment of the actual evidence and inherent probabilities.

‘This is a shame, but the defendants can do no more than defend themselves and seek by way of a modest counterclaim, the outstanding fees.’

Mr Ritossa won fame and fortune by carving out a career as one of the world’s top bankers and has been credited with transforming and modernising Barclays’ foreign exchange arm.

The couple once owned one of Australia’s most expensive houses, a beachside mansion in Sydney valued at $45million a decade ago.

The judge has now adjourned the case to return at a later date.

Kentucky Rep. Andy Barr’s wife, 39-year-old Carol Barr, dies ‘suddenly’ with no cause given, leaving behind 2 daughters – The Sun