Hundreds of airline workers at Heathrow will strike this month in a heartbreaking blow for football fans hoping to jet out to Qatar and cheer on England during their opening game of the World Cup.

More than 700 transport, cargo and ground staff at Europe’s busiest airport will be walking out from November 18 to the early hours of November 21 in a bitter row pay row.

Strike action is expected to cause travel chaos, triggering delays and disruption at Heathrow Terminals 2, 3, and 4 – the terminal that Qatar Airways flies from.

The action is being staged by the Unite union. The group’s regional officer Kevin Hall said: ‘Strike action will inevitably cause severe disruption and delays across Heathrow, especially for football supporters travelling to the World Cup. 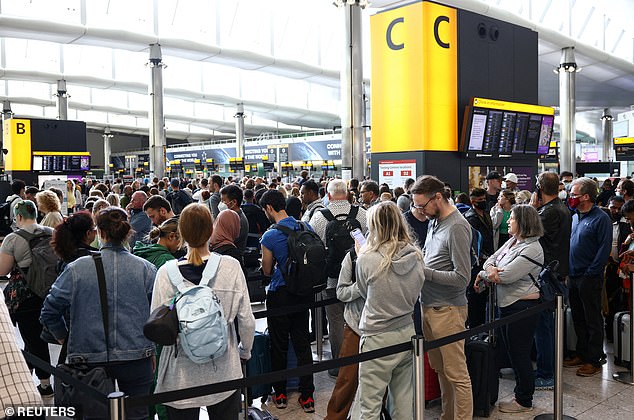 Football fans looking to jet off to Qatar to watch the World Cup could face travel chaos after airport workers voted to back strike action this month. Pictured is a file photo of queues at Heathrow Airport 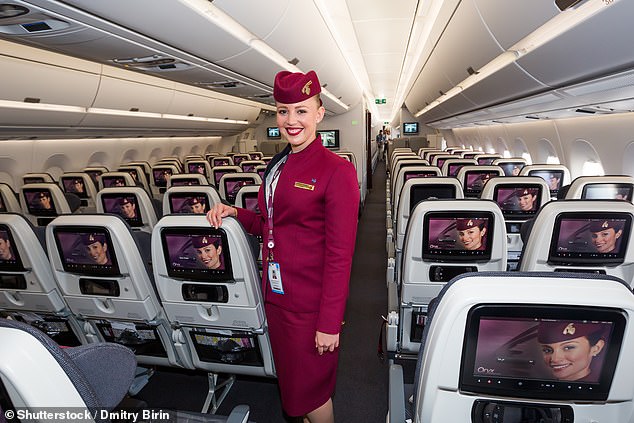 Qatar Airways, which has scheduled an extra 10 flights a week during the World Cup, is expected to face severe disruption. Pictured is a Qatar Airways stewardess

‘However, this dispute is entirely of Dnata’s and Menzies’ own making and they know what to do to resolve this, which is to make our members a fair pay offer.’

The strike is being staged by activists from the Unite union and involves workers from Menzies and Dnata.

Other airlines anticipated to be hit by the walk-out include Virgin, Singapore Airlines, Cathay-Pacific and Emirates.

Balloting action begins today and will conclude on November 3. An exact date for any potential strike has not been released.

Dnata has offered its workers a five per cent increase, while the offers for Menzies workers vary between two and six per cent.

But Unite said that all the offers are ‘far below the real rate of inflation’, which currently stands at 12.3 per cent. 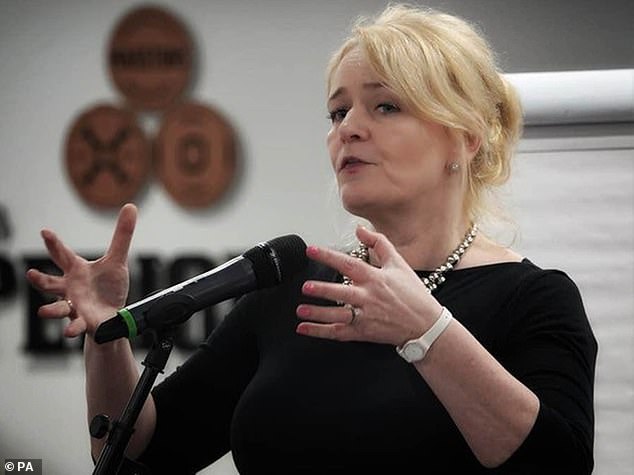 Unite general secretary Sharon Graham, pictured, insisted the strikes were about ‘defending and enhancing’ the pay of the union’s members

‘Both companies are highly profitable and can fully afford to make a fair pay increase.

‘The workers at Heathrow will have Unite’s complete support during this dispute.’

Phil Lloyd, senior vice-president UK, Menzies Aviation, said a pay offer of seven per cent had been implemented in January and insisted the company wished to continue an ‘open and honest’ consultation to make ‘a further increase in 2022’.

He added: ‘Unite are taking extreme and unnecessary steps by threatening industrial action at Heathrow Airport and they are refusing to engage in further meaningful discussions with Menzies and other parties as part of the collective bargaining agreement.

‘Given Unite membership is approximately less than 15 per cent of our ground services workforce at Heathrow Airport, we are confident our contingency planning will ensure airline partners and passengers will not be disrupted should industrial action go ahead.’

A spokeswoman for Heathrow insisted it was only airline staff striking, not the airport’s own staff.

The official added: ‘We are aware of proposed industrial action from Dnata and Menzies colleagues at Heathrow, and we are in discussions with our airline partners on what contingency plans they can implement to support their ground handling should the strike go ahead. Our priority is to ensure passengers are not disrupted by airline ground handler shortages.’

When politics pit kids against parents