Home buyers living in a ‘luxury’ new build development say their lives have become a ‘nightmare’ after finding dozens of faults in their properties.

Residents in the Barnes Village development in Cheadle, Greater Manchester, said they were promised ‘elegant’ family homes when they purchased off-plan two years ago.

But months after moving in, they say the development, located on the site of the former Barnes Hospital, is wracked with issues. One resident, who paid £390,000 for his property, said he had endured ‘nothing but problems’.

Home buyers said multiple gas leaks and a carbon monoxide leak have triggered evacuations, a fire door has been botched, boilers had the wrong fuse fittings and there are no burglar alarms, just sensors.

They also said a waste pipe sits above electrical distribution panels, while the fire alarm doesn’t cover all areas, and there is inadequate fencing around children’s play areas, which border the motorway. 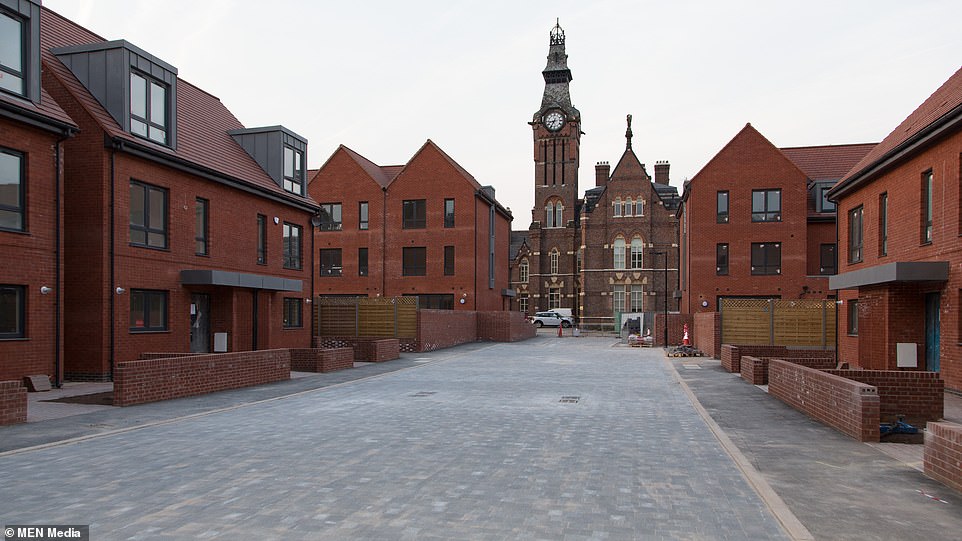 Residents in the Barnes Village development in Cheadle, Greater Manchester (pictured), said they were promised ‘elegant’ family homes when they purchased off-plan two years ago 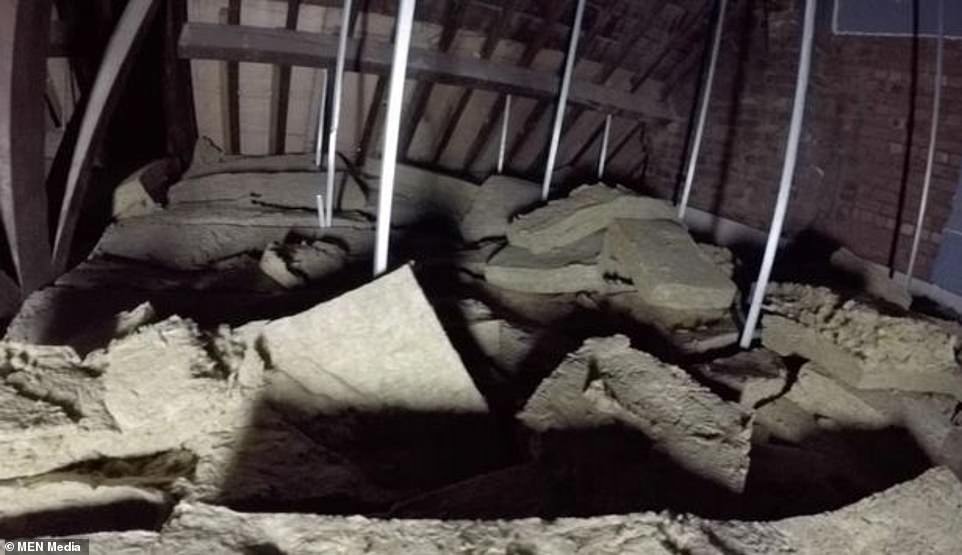 Loft insulation at Barnes Village development in Cheadle, Greater Manchester. Home buyers have complained of ‘freezing’ temperatures and say their lives have become a ‘nightmare’ after finding dozens of faults in their properties 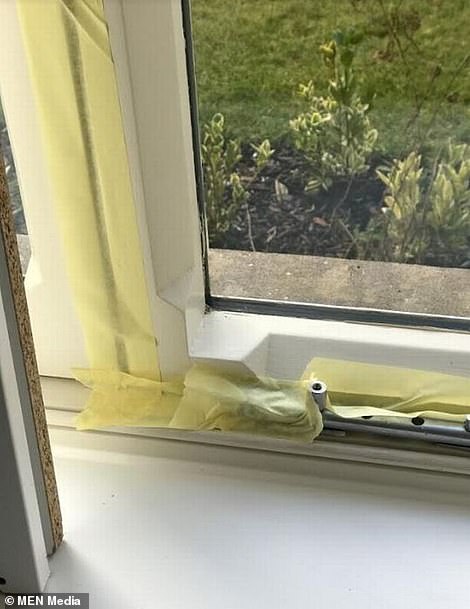 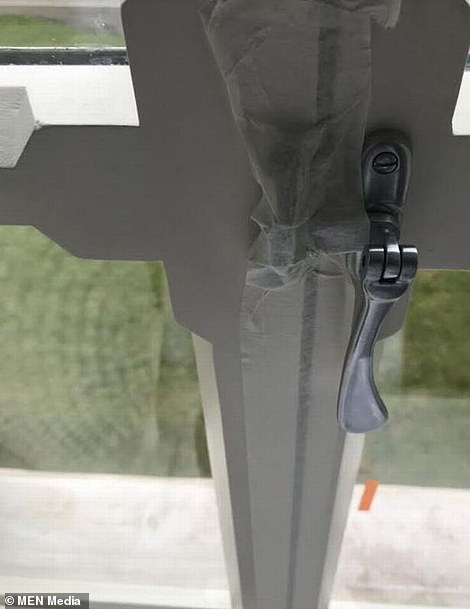 Draughty windows at Barnes Village development. One homeowner said: ‘At the moment our windows have masking tape to stop the draft. When it is cold or windy we have to use an airbed to sleep in the living room. It is under-heated and draughty’ 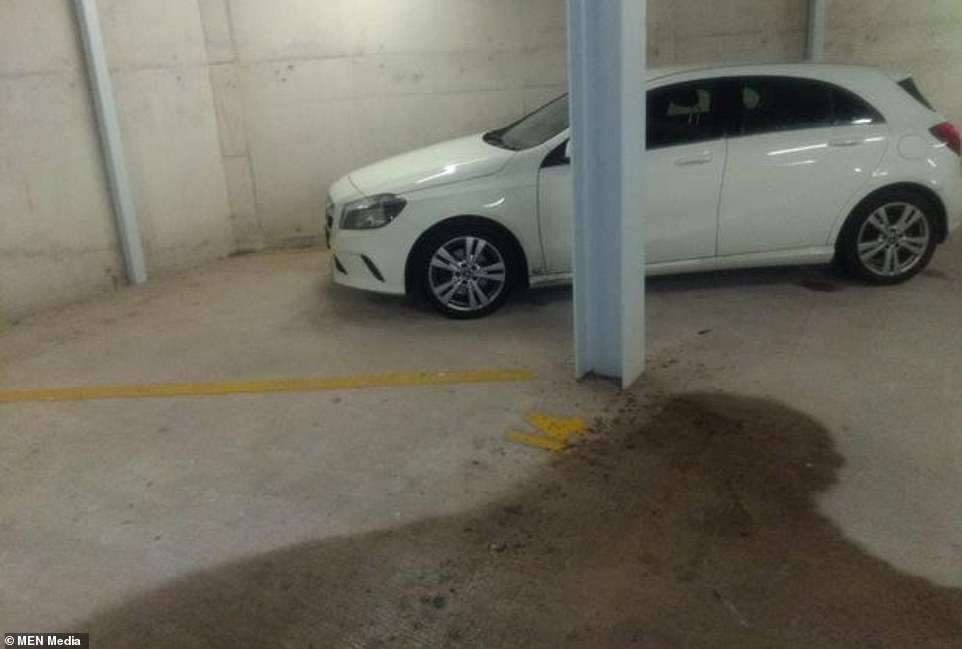 ‘Freezing’ temperatures from a lack of insulation, a collapsed staircase, bin odour, damp floorboards, bathrooms which needed re-tiling and dry rot covered up with plaster are among some of the complaints made by residents.

Others include kitchens which don’t come up to the promised spec in the new-build properties, window frames that needed replacing because they weren’t airtight, and softwood frames used when hardwood was shown in plans in the apartments.

Home buyers were also been left disappointed by the state of the communal areas, saying there are no tennis courts or football pitch as described on the plans, and that the underground car park has a leaking roof and is plagued by nesting pigeons soiling vehicles.

The residents say they have contacted developers Henley Homes to sort out the issues and have asked for compensation, and the company responded saying they have an aftercare team on site available to sort any issues, while they have arranged a meeting with residents in February to discuss further concerns.

Michael Morris, 62, purchased a three-bedroom apartment with his wife inside the renovated hospital building – costing £330,000. He regularly has his grandchildren staying over and said he is concerned over gas leaks in the building. 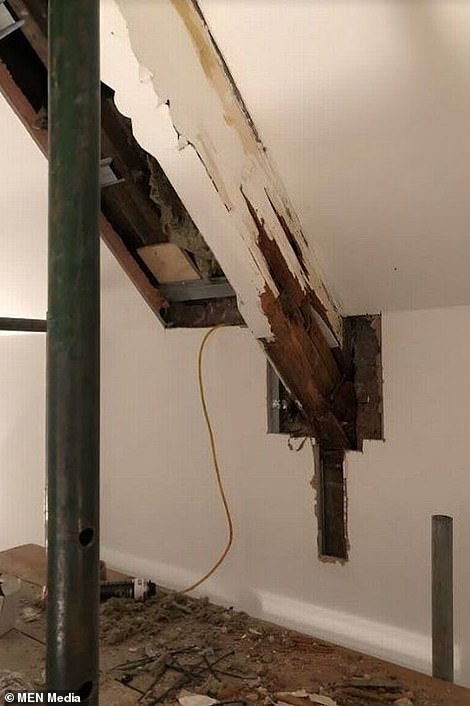 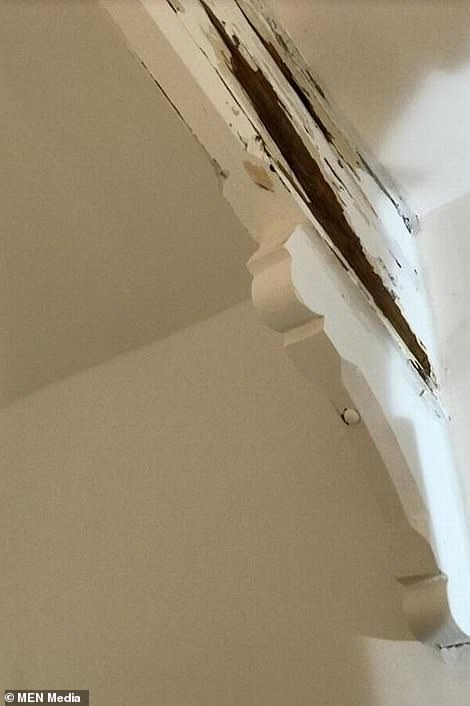 Beams which residents fear are rotting at Barnes Village development in Cheadle, Greater Manchester. One flat owner said there were fears the roof in the hospital would collapse after dry rot was discovered on a beam

A waste pipe above an electrical unit which residents fear is dangerous, at Barnes Village development in Cheadle, Greater Manchester

Mr Morris said the most dangerous leak took place on September 14 last year, when the emergency gas service discovered a carbon monoxide leak in a section of the building.He said the west wing of the building was evacuated and the gas had to be switched off and capped.

Mr Morris said: ‘It has been a nightmare, in our particular circumstances it has been life-threatening. The last time gas was released we were awoken by the alarm going off at 12am, four months ago.

‘My wife called the emergency gas service. They evacuated the west wing of the building. We had been feeling sick and dizzy. We have had numerous problems with them, the staircase collapsed.

‘The bathroom they have had to re-tile again, we had the en-suite done three months ago. [Henley] are a nightmare to deal with. They are an outfit from London, they think they can come down here and think we are just cobbled streets and flat caps.

‘It is terrible, it is absolutely horrendous.’

The residents said engineers from Gas Safe Register were going to be conducting checks on properties after up to 40 people called over concerns over their boilers. 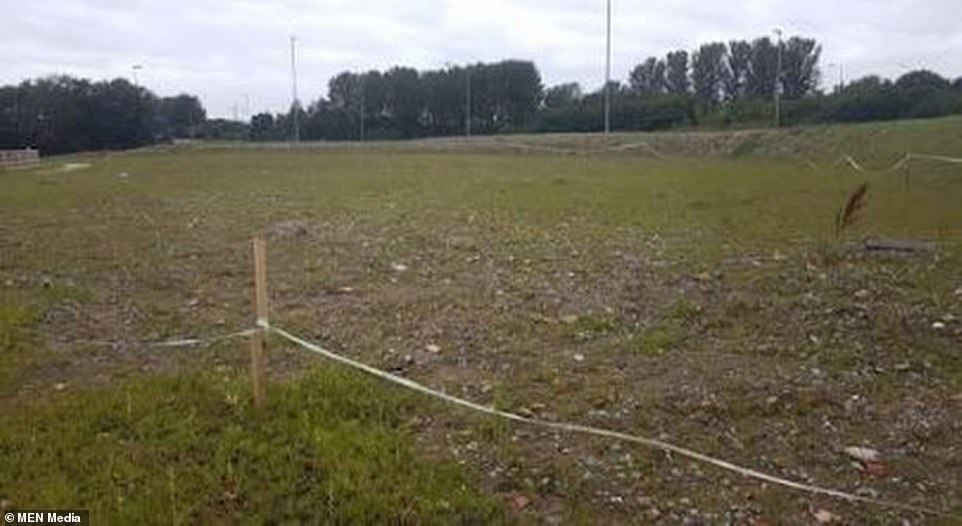 ‘The grounds were to contain a football field, as you can see the ground is awful and dangerous under foot as there are lots of pits, it also is not maintained,’ a resident said 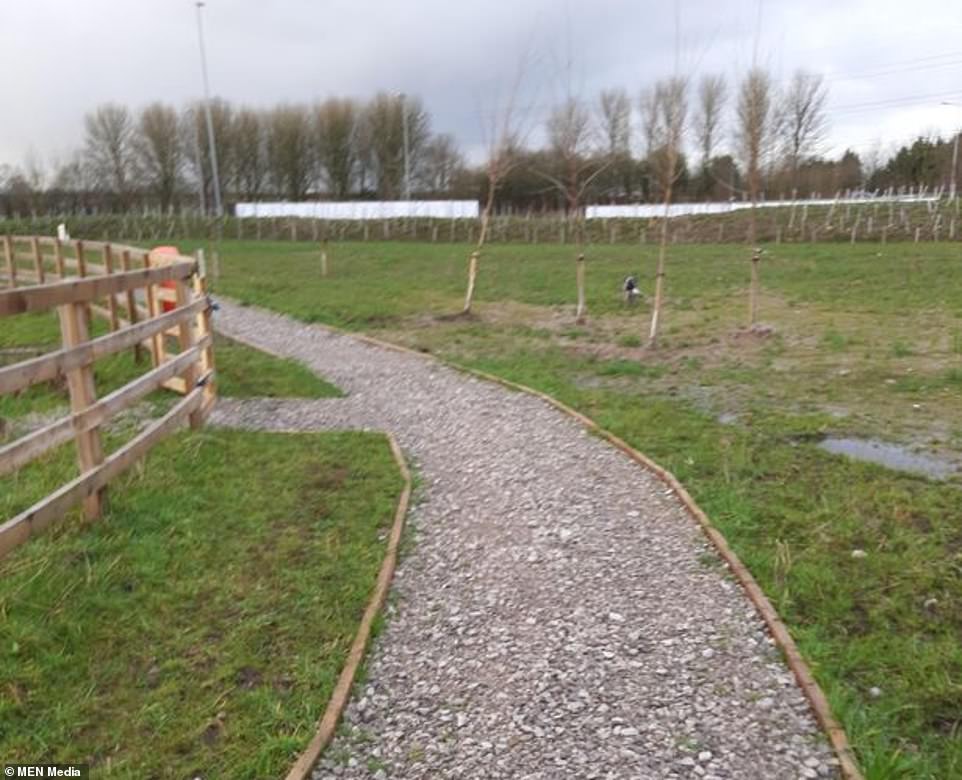 A path which residents say it unsuitable for pushchairs at Barnes Village development in Cheadle, Greater Manchester

Another homeowner, who purchased one of the new build houses on the site for £390,000, said he could not use the ground floor for three months due to severe damp under the floorboards.

The homeowner, who wishes to remain anonymous, said: ‘We have had nothing but problems. All of our ground floor was damaged, we couldn’t use it for three months. There was damp underneath.

‘We had to use a vacant apartment kitchen across the road. All of the fire doors are botched, smoke can go through them, including my daughter’s. The boiler has the wrong fuse. We have had about 70 issues in our property all together.

‘When we exchanged the kitchen was completely different, it was missing half the kitchen. It was meant to be u-shaped but everything was against just one wall. We just want to get everything fixed.’

Another resident, who also wishes to remain anonymous, said: ‘I moved in 18 months ago. The problems started immediately. All of the windows were scratched, they needed replacing. The floorboards were coming apart.

‘There is a video on the website saying there are luxury gardens, a park for children and a tennis court. The park is just two swings and a slide with no steps up. It’s just a mess. 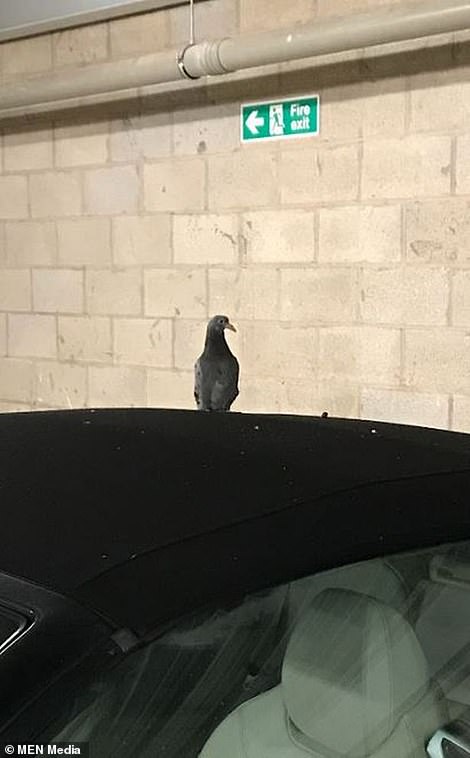 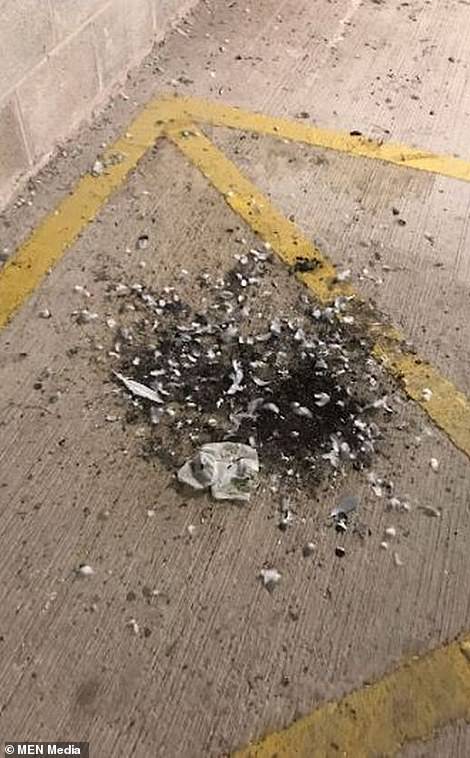 Pictured left: A pigeon in the car park at Barnes Village development in Cheadle, Greater Manchester. Residents have complained that the birds have been soiling their vehicles. Right: Bird droppings in the car park 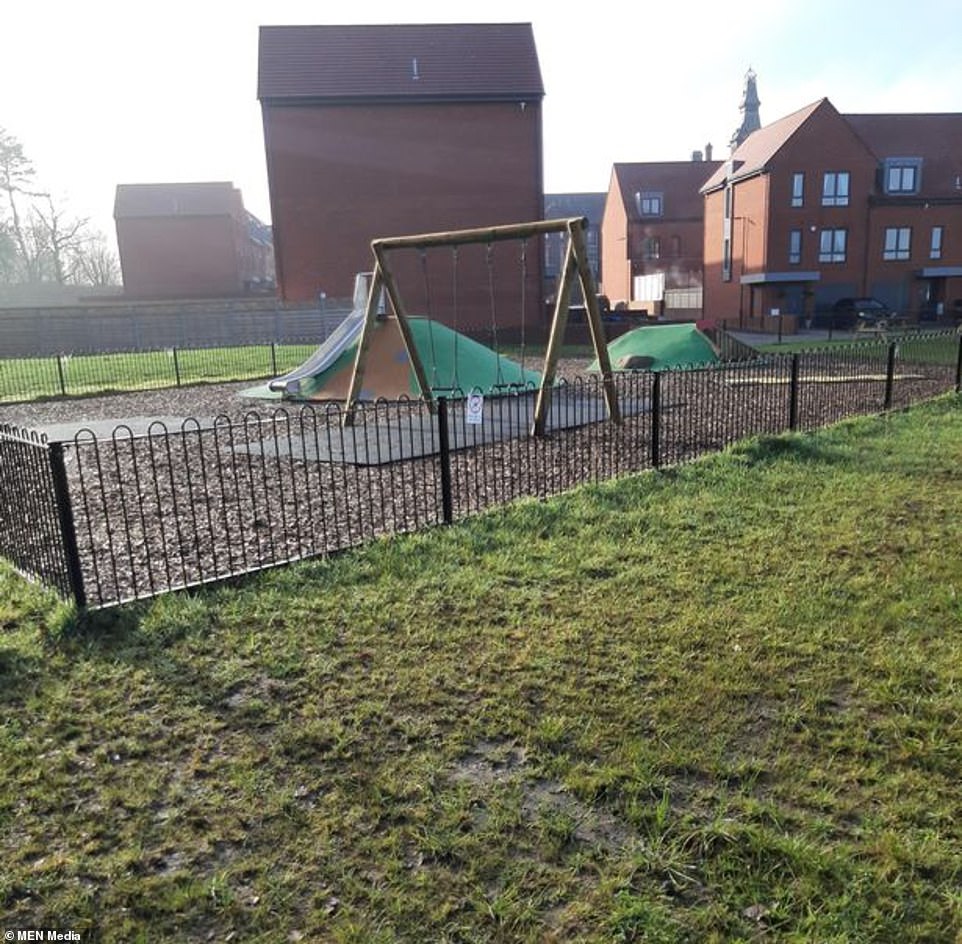 The playground at Barnes Village development in Greater Manchester, where residents have complained of several problems 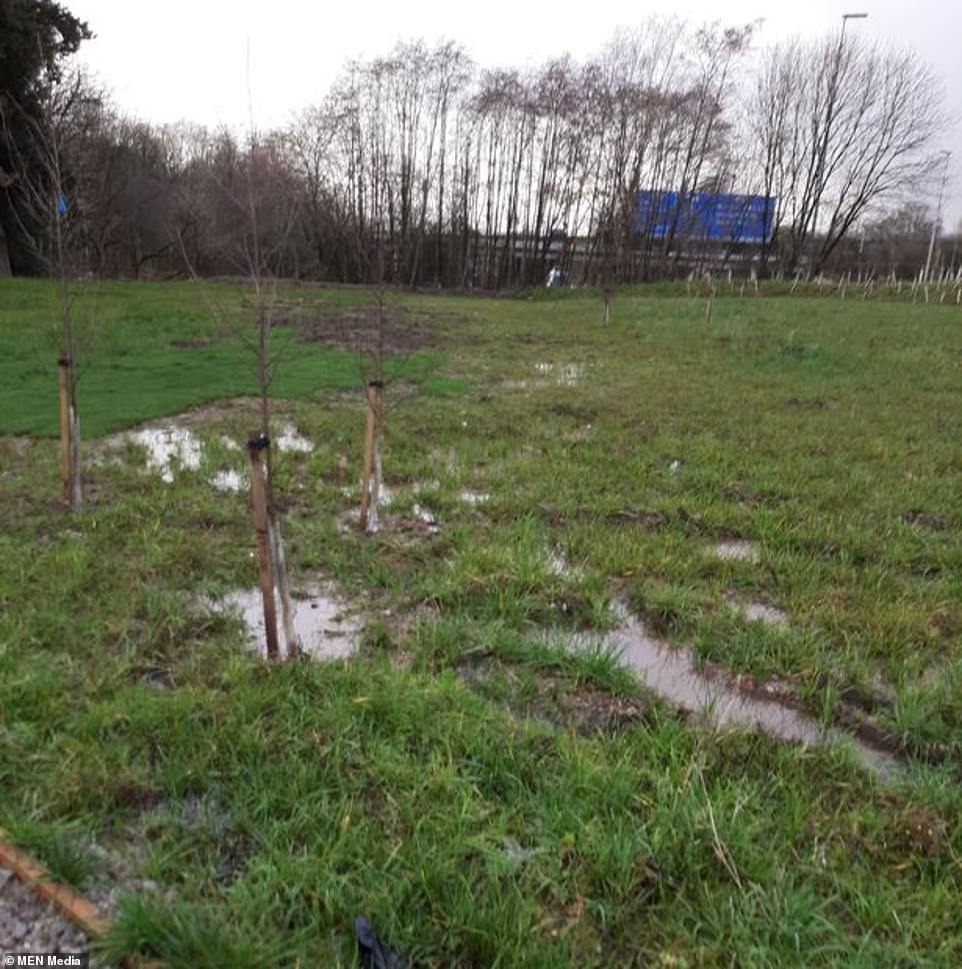 Fields which residents claim are not being maintained at Barnes Village development in Cheadle, Greater Manchester

‘The grounds were to contain a football field, as you can see the ground is awful and dangerous under foot as there are lots of pits, it also is not maintained.

‘The landscaping is terrible, just trees or saplings, that will take years to grow. No plants or turfing on the ”luxury grounds”. There are dead trees at least six with branches falling off, a path which we have asked to have as a suitable surface as its just stone and not suitable to walk on and buggies can’t be pushed on there, it also looks a mess.

‘We have got a wonderful community, we have a street party and fireworks night. The only thing spoiling it is Henley – they need to fix it.’

One flat owner said there were fears the roof in the hospital would collapse after dry rot was discovered on a beam. She said it took a year to fix.

The homeowner said: ‘The rot in there was treated but it had no structural integrity, it took them a year to fix it.

‘If it fell down part of the roof would have collapsed. At the moment our windows have masking tape to stop the draft. When it is cold or windy we have to use an airbed to sleep in the living room. It is under-heated and draughty.

‘It’s also worth mentioning that if you hold a naked flame by the window gap, the draft actually blows the flame out. We have had to move out twice for them to come in and fix things.’

Another apartment owner, who has lived on the site for more than two years, said: ‘They have put communal bins directly outside the windows of some apartments. It smells bad. It looks ugly. This was never on the model or plans.

‘There is a basement underground car park. It is like a nest for pigeons, our cars are covered in droppings. The landscaping is really bad. It feels like we have been mis-sold. Kids cannot play there. They miscalculated the EPC rating, they said it was B.

‘When you buy somewhere you look at the efficiency rating. But they have draughty windows. It said hardwood, they are softwood. Sometimes we can’t open them and they are scratched. They just don’t function.

‘We got this new property because we didn’t want builders in, but we have had to have works non-stop.’

A Henley Homes spokesperson said: ‘We acknowledge some issues from residents at Barnes Village, particularly those residing in the Listed building, which was a former hospital.

‘The safety of our residents is our utmost priority and our aftercare team has been working with individual residents where issues have occurred and some have since been resolved.

‘We have a dedicated team that are based on site to manage any issues that may present themselves due to the size of the development and the phased approach to delivery.

Barnes Hospital is known to cult horror fans for featuring in the 1970s zombie thriller ‘Let Corpses Lie’, also known as ‘The Living Dead at the Manchester Morgue’ and ‘Don’t Open the Window’.