International travel may be possible this year as the Pfizer vaccine begins bolstering the country’s defences to COVID-19.

As dozens of flight crew and other airport workers joined the first Victorians to become vaccinated against coronavirus at Melbourne Airport on Monday, experts said unrestricted travel to and from select countries could return within months. 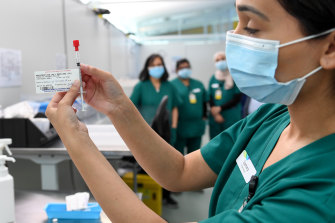 Air New Zealand will ask passengers to use a digital health pass on flights to Australia in April, in a trial run of a “vaccine passport” system, giving a glimpse of what international travel will look like until the coronavirus is no longer a threat.

The dormant international terminal of Melbourne Airport – once a symbol of the havoc wrought by coronavirus – on Monday became a place of optimism and excitement as the first vaccinations were delivered.

University of South Australia epidemiologist Adrian Esterman said he expected vaccine passports would be developed between now and the year’s end.

“If you’ve got a vaccine passport and you’re coming from a low-risk country, then you’ll probably be deemed absolutely safe and there’ll be no restriction whatsoever,” Professor Esterman said.

“But if you’re coming from a high-risk country, which has got these new [COVID-19] variants … even though you’ve been vaccinated, there might be some need to isolate for a few days.”

Victoria’s first COVID-19 vaccination was given about 7.30am on Monday to Monash Health’s Rhonda Stuart, one of the doctors who treated the state’s first coronavirus patient in January last year. 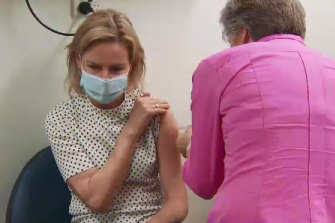 “We placed it in the fridge straight away – between 2 and 8 degrees – and we checked the log to see if there had been any temperature breaches, and there wasn’t,” she said. “From there we were good to go and I started to prepare or reconstitute the vaccine.

“I was a bit nervous the first time, but once I started to get into the routine, it was fine… I was more excited than anything.” 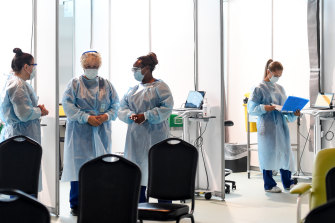 A team of six pharmacists worked throughout the day at stations, diluting the vaccine, drawing up six doses from every vial and constantly monitoring the fridge.

Victoria will initially receive 11,000 doses of Pfizer’s vaccine each week, to be given to the vulnerable and those in high-risk jobs, including aged care residents and front-line health workers.

Vaccination of hotel quarantine workers began on Monday, and the Melbourne Airport clinic, constructed at an unused departure lounge, will give hundreds of airline flight crew, customs workers, cargo handlers and other airport workers the vaccine each day.

Among them on Monday was Qantas A330 captain Dean Peters, who along with his colleagues has been periodically stood down due to a reduction in flights. 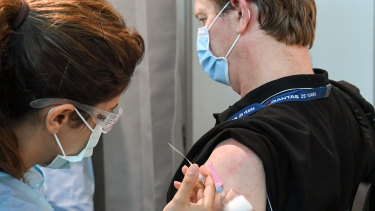 They share in the remaining work, a combination of freight and passenger services, and isolate for 14 days at home after any international travel.

After receiving the vaccination at Melbourne Airport at 10.30am, he said it was “painless in every sense”.

“It’s a very small needle, I didn’t even feel it … 15 minutes later, I drove home and I’m at home now, and there’s no issues whatsoever.”

The federal government plans to complete the vaccination rollout to all adult Australians who wish to have the jab by October.

Travel industry leaders expect COVID-19 immunisation will become mandatory for international flights once vaccines have been widely distributed, with Qantas chief executive Alan Joyce saying in November it would be a requirement to fly on his airline. Incoming travellers to Australia already have to provide evidence they tested negative to COVID-19 within 72 hours of their departure.

Air New Zealand will be one of the first airlines to use the International Air Transport Association’s Travel Pass app, which passengers link to their e-passport and will carry verified copies of test results and – in the future – vaccination records.

The April trial will be for passengers leaving Auckland and those on return flights from Sydney.

Singapore Airlines, Emirates, Etihad, Qatar Airways and British Airways have all said they plan to use the IATA travel pass. With the exception of New Zealand, people travelling to Australia from overseas currently have to undergo a mandatory 14-day quarantine.

The director of the Burnet Institute, Brendan Crabb, said as things stood, travel bubbles between other low-risk “green” countries might “be quite common in the second half of the year”. But he cautioned that “much of the world still has a lot of COVID” and wouldn’t be classified as “green”.

Experts say restrictions will remain if the vaccines do not end up stopping transmission of the disease to the extent expected or if variants emerge that are significantly resistant.

Victorian Health Minister Martin Foley visited the Austin Hospital on Monday morning, where about 30 staff were being inoculated. He described the rollout of the vaccine as complex and said it would be the “largest logistical medical program” in the nation’s history.

”This is about a first-step pathway out of this pandemic,” he said. “It adds to our public health tool kit and to make sure we are in a position to look at the light on the other side. There’s still some time to go.”

In a bid to improve confidence in the program and quell vaccine hesitancy, Ben Cowie, senior medical adviser for the COVID-19 vaccination program, said the Pfizer and AstraZeneca jabs were “safe, effective and free”.

He pointed to the success of Israel, which has the highest vaccination rate in the world, where more than 49 per cent of people have received at least one dose of Pfizer. Israel’s health ministry at the weekend said studies revealed the risk of illness from the virus had dropped 95.8 per cent among people who have had both doses of the Pfizer vaccine.

“So the early evidence [from Israel] … is firstly that the actual rates of infection in those vaccinated are going down,” Professor Cowie said.

The best hot brush hair stylers you can buy in 2020