Home » World News » ‘I am not leaving because it was hard’: Why Jacinda Ardern walked away

Wellington: The end to Jacinda Ardern’s prime ministership was as remarkable as her rise.

Very few, save for Ardern’s inner circle, had any inkling she was about to make a bombshell announcement in the sea-side art deco city of Napier before Thursday.

She told her cabinet at 7.30am on Thursday, Wellington time, and her party room moments before her press conference.

Those she brought into her confidence over the summer – including Deputy Prime Minister Grant Robertson and partner Clarke Gayford – tried to talk her out of it.

The one member of her inner sanctum she didn’t tell was her young daughter Neve. With good reason.

“Four-year-olds are chatty,” she said.

The prime minister’s joke was a rare laugh-out-loud moment on a jaw-dropping day.

Ardern was expected to announce an election date or a ministerial reshuffle at Labour’s year-starting party retreat.

However, the first hint of an impeccably kept secret came when Gayford took a seat in the front row of the room.

Even the most seasoned political journalists hadn’t a clue of Ardern’s news, which left MPs so shocked they struggled to respond to it afterwards.

When Ardern left the press conference and returned to her party room, she was met with tearful embraces from her colleagues and Maori song.

The caucus sang the waiata Tutira mai nga iwi – a song of unity, strength and diversity the Black Ferns had sung when they won the Women’s Rugby World Cup last year.

One of those there, Ardern’s predecessor as leader Andrew Little, said the caucus was shocked but understood.

“The number of issues and challenges and the scale and magnitude of them that she’s dealt with in the last five years, I doubt there’s been another prime minister in New Zealand’s history that has dealt with that.”

Ardern has grappled with a truly remarkable set of trials and tragedies.

She steered Labour to power after becoming Labour leader just seven weeks before the 2017 election day, a campaign marked by “Jacindamania”.

Further tragedy followed in December when the Whakaari volcano erupted as tourists explored its crater, killing 22 including 14 Australians.

In 2020, New Zealanders rewarded her government’s response to COVID-19 with a second term in office but the pandemic’s many and varied challenges continued.

Ardern led New Zealand as she became a mother for the first time, giving birth to Neve nine months into the job.

Explaining her departure to the population, Ardern said there was no single moment that led to her decision.

“The cumulative challenges that we’ve faced as a team – and they have been extraordinary – has taken its toll,” she said. 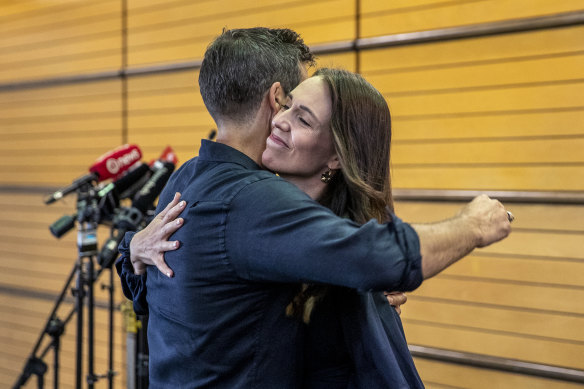 “The decisions that have had to be made have been continual and they have been weighty … there’s never really been a moment where it never felt like we were just governing.

“But I am not leaving because it was hard. If that was the case I probably would have departed two months into the job.

“I’m leaving because with such a privileged role comes responsibility.

“I know what this job takes. And I know that I no longer had enough in the tank to do it justice. It’s that simple.”

In her last act as prime minister, she named October 14 as the election day, when Labour will attempt to win a third term in government.

Ardern insisted her departure would not destabilise Labour and her announcement was made with the party in mind.

“Every political leader has to reflect on the transitions that need to be made,” she said.

“It’s about knowing when you’ve got what it takes and what is needed to lead but also having the courage to know when you don’t.

“There’s no doubt this is a big change but I also absolutely believe that we have the capability and our team to continue to carry New Zealand forward.”

'Succession': Best and Worst Episodes of Season 1, According to IMDb

Cardi B Unloads on Fan at London Concert, Uses Mic in Beatdown