Home » World News » ‘If you have to ask, you can’t afford it’: Rare pink diamond on display at Melbourne Museum

A 2.83 carat pink Australian diamond, believed to be the rarest in the world – and stored in New York since 2016 – is now on display at the Melbourne Museum.

It’s part of the Pink Diamonds exhibition – the largest collection of Australian pink diamonds to be shown in the world – which showcases more than 100 gems from the Kimberley region and mined at the Rio Tinto-owned Argyle Diamond mine. 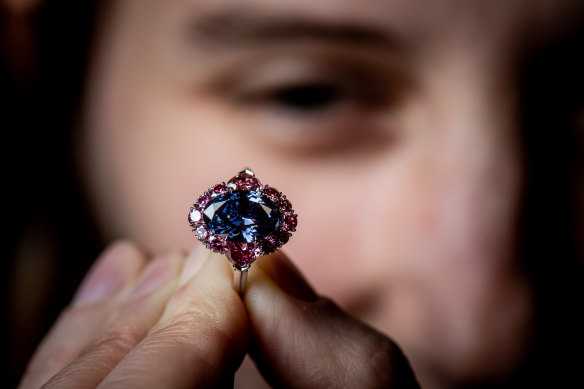 The Argyle Violet is on display at the Melbourne Museum from Saturday. Credit:Justin McManus

Pink diamonds are exceptionally rare, with only one carat in every million displaying the intense colour.

The showpiece is the Argyle Violet, which owner and exhibition partner, diamond collector L.J. West Diamonds, believes is the rarest diamond in the world.

William Gant, Australian managing director for L.J. West, said the diamond wholesaler bought the 2.83 carat stone in 2016, and it has mainly been kept in storage at its New York headquarters since.

Gant would not reveal how much L.J. West paid for the Argyle Violet or what it was worth now, but said the diamond was not technically for sale and would be “in the tens of millions”.

“The value is, ‘What is your price, and then we’ll think about it’,” he said. “It’s one of those things that if you have to ask you can’t afford it.

“It’s a very unusual stone; we posit that [it] is perhaps the rarest diamond in the world because of its characteristics,” he said. “Its colour, its size, just the amazing uniqueness of the origin of the colour as well.” 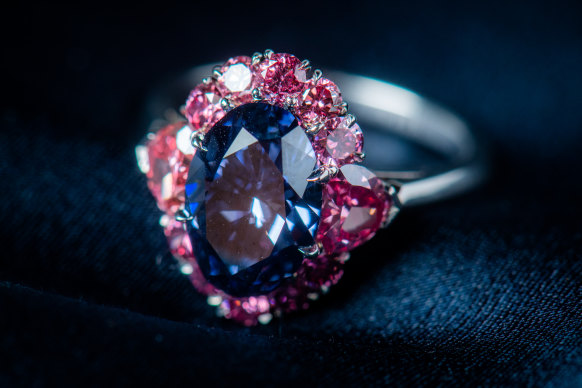 The Argyle Violent is now on display at the Melbourne Museum.Credit:Justin McManus

The diamonds on display were formed about 1.6 billion years ago in a high-temperature and high-pressure zone about 150-200 kilometres deep in the earth’s mantle.

Museums Victoria director and chief executive Lynley Crosswell said the museum was staging the exhibition so the public could have access to the incredibly rare and precious gems.

“What makes them so special really is the colour, and the colour is only made possible due to specific occurrences in the earth,” she said. “The more of us who can enjoy colour and light and brilliance that’s produced by the earth, the better.” 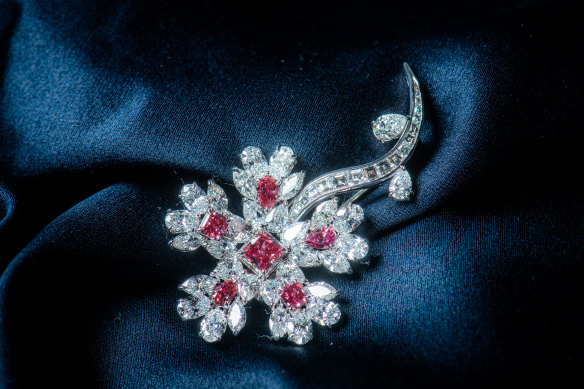 The Argyle Diamond mine closed in 2020, and restoration of the site is ongoing.

In 2005, Rio Tinto and the traditional owners of the land on which the Argyle mine is situated reached a historic agreement that was then regarded by the federal government as “a model for other companies”. But the company’s relationship with Indigenous communities remains fraught, especially since the destruction of a 46,000-year-old Indigenous heritage site at Juukan Gorge in Western Australia in 2020.

Croswell said the museum acknowledged the traditional owners in the exhibition.

“The history there is a long and complex one, and the commitment of Museums Victoria is to continue to work with those traditional owners to tell their stories and to acknowledge the developing relationships that those communities are having with mining companies,” she said.

Croswell said Museums Victoria was working on a permanent exhibition that will tell the story of the traditional owners and their deep connection to the land that produced the diamonds.

Pink Diamonds is showing at Melbourne Museum until January 29, 2023, and is free with museum entry.

Exactly How to Watch the Latest Harry Styles Movie, ‘My Policeman'

Jimmy Kimmel May Have Just Pulled Off His Greatest Prank Ever

I’m a tattoo artist – a customer asked me for a NSFW pin up 'tribute', I couldn’t believe it when he told me who it was | The Sun

Australia feels chill as China and US trade blows over microchips