Royal insiders have revealed how two terms at a prestigious Australian school shaped King Charles III into the colourful man he is today.

The then Prince spent two semesters at Geelong Grammar School in Victoria’s High Country back in 1966 when he was just 17-years-old.

In a speech years later, he fondly recalled the experience as the start of a long love affair with Australia and said it had transformed him from a boy into a man.

‘Part of my own education took place here in Australia,’ Charles told the crowd on a visit Down Under.

‘Quite frankly, it was by far the best part. While I was here I had the Pommy bits bashed off me. Like chips off an old block.’ 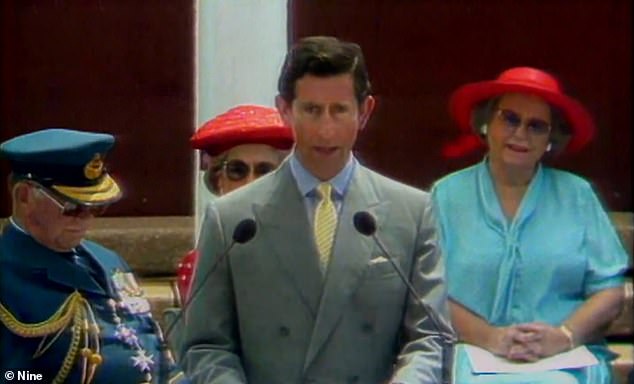 In a speech years later, Prince Charles fondly recalled his days as a schoolboy in Victoria as the beginning of a long love affair with Australia

Charles was a Prefect at the no-nonsense boarding school with the other students asked to refer to the star student as Prince Charles.

The 73-year-old has visited Australia on 16 occasions, some with his first wife Diana and his young son William and more recently with his second wife Camilla, now the Queen Consort in the wake of Queen Elizabeth’s death on Friday, aged 96.

Before his two semesters at Geelong, Charles attended the same boarding school as his father Prince Phillip – the renowned Gordonstoun School in Elgin, Scotland.

However the school didn’t prove as great a match for the heir who likened it to a German concentration camp’ and dubbed the institution ‘Colditz in kilts’.

A student who attended Gordonstoun for four years alongside the Prince told 60 Minutes Australia that the school hadn’t been an ‘ideal’ choice. 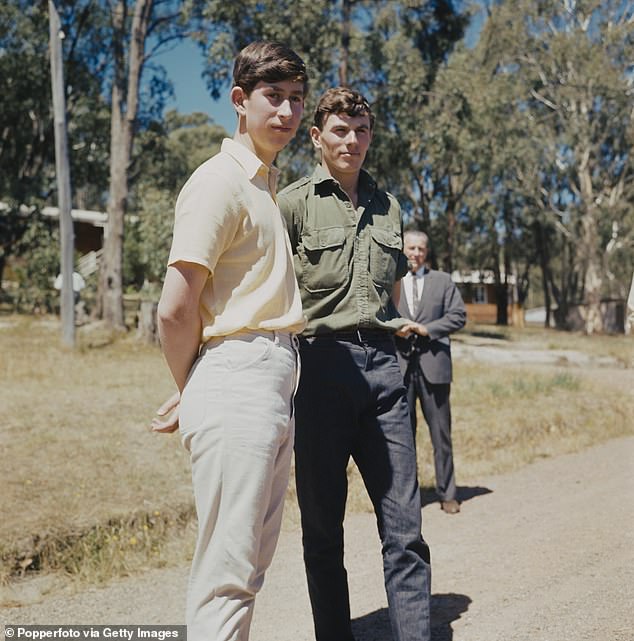 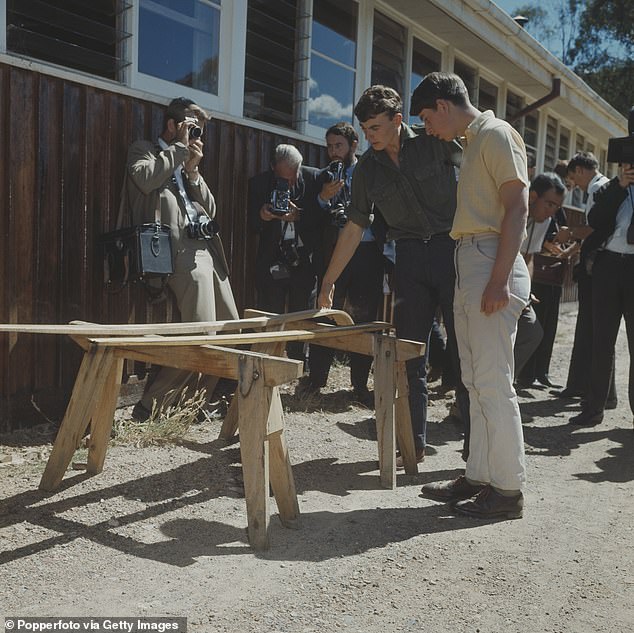 Other boys avoided the Prince so they wouldn’t become the targets of school bullies who relished having a young Royal to tease.

Mr Stonborough said he once watched Charles be viciously attacked in a scrum playing rugby.

‘I could see that they were pulling his ears and he got punched, but the interesting thing is, and it left an impression on me even at the time, is that he was very stoic.

‘He never complained, he didn’t whinge, he didn’t cry, he didn’t do anything that other people might have done in the same circumstances. 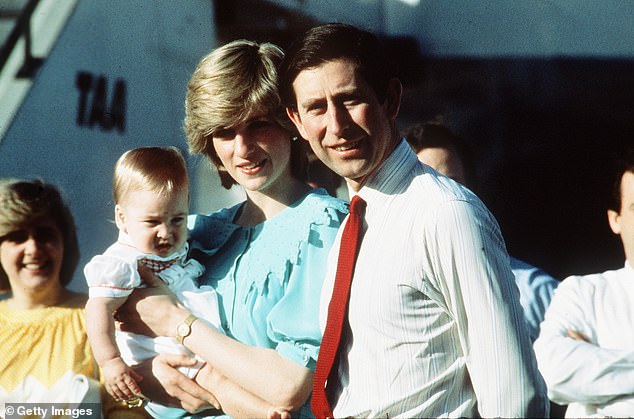 Brown asked if the Prince had fought back against the schoolyard bullies.

‘Absolutely not, no. He was not that sort of person,’ Mr Stonborough replied.

‘He was quite a gentle soul and once you got to know him a little bit better, actually a remarkably nice person.’

Brown wondered if he saw this as a sign of strength or weakness.

‘That’s a very interesting question. I think I saw it as a sign of strength, but it also made him vulnerable, and sometimes one wished he retaliated a little more,’ Mr Stonborough said.

During his schooling in Australia however, he became much happier and more confident in himself. 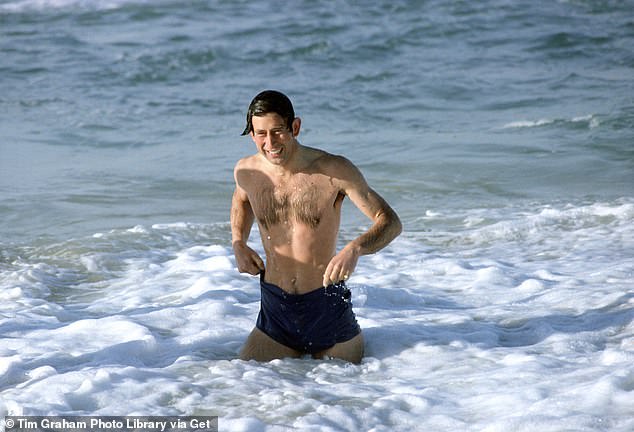 During his visits, the Royal has represented the Queen at state funerals, stole a kiss from an Australian model in Perth and even enjoyed a dip at Bondi Beach (pictured)

The then Prince of Wales made a much-anticipated trip to Australia with his wife Diana and a 10-month-old Prince William in 1983.

During his visits, the Royal has represented the Queen at state funerals, stole a kiss from an Australian model in Perth and even enjoyed a dip at Bondi Beach.

In 1994, a 23-year-old man was arrested after firing a starter pistol at Charles as he prepared to hand out Australia Day awards in Sydney.

David Kang stormed a stage and fired two blank shots at Charles during the royal tour – with the incident proving to be something of a turning point for Charles in Australia, as his visits tailed off afterwards. 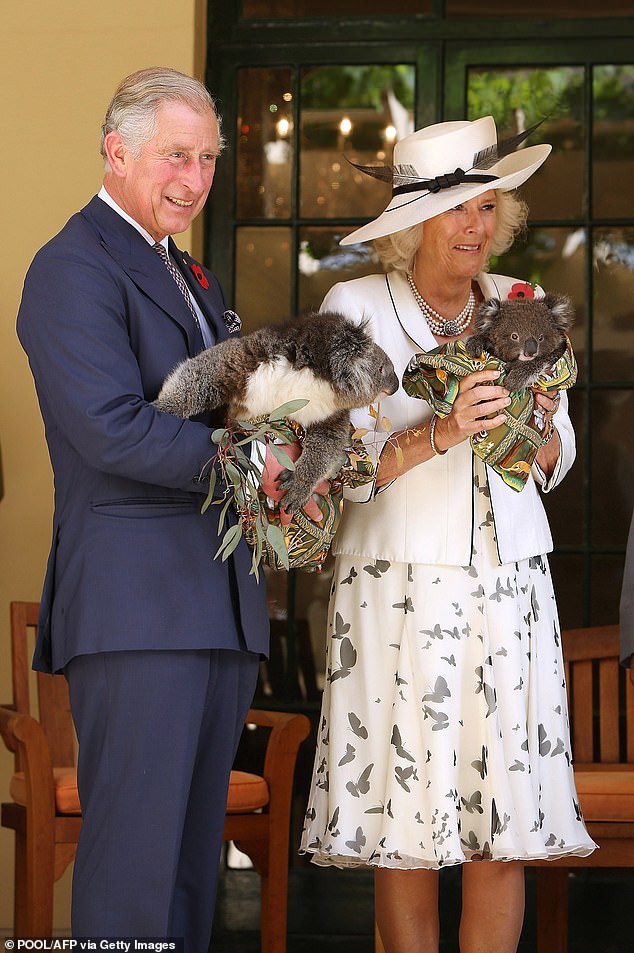 He has visited Australia on 16 occasions, more recently with his second wife Camilla, now the Queen consort (pictured, the pair hold koalas in Adelaide in 2012)

Royal experts believe King Charles III will soon make a trip to Australia and New Zealand in order to ‘seal the bonds’ amid growing calls for a Republic.

In a statement released just 24 minutes after news broke of the death of the Queen the Australia Republic Movement said Her Majesty had backed the right of Australians to become ‘a fully independent nation’ during a referendum in 1998.

The Australian Monarchist League also released a statement, throwing their full support behind Charles as takes on his new role as King.

They said he has ‘trained his whole life’ to take the reigns of the royal family and that he has always served Australia ‘selflessly’.

Philip Benwell, national chair of the Australian Monarchist League, said: ‘Australia, the Commonwealth of Nations and indeed the whole world will now deeply mourn the longest-serving, oldest and most revered monarch of modern times.’

1966: Prince Charles visited Australia for the first time as a schoolboy, spending two terms at Timbertop, the rural campus of Victoria’s Geelong Grammar School, and ‘loved it all’.

1967: The young prince represented the Queen at the memorial service for Prime Minister Harold Holt, who disappeared while swimming at Cheviot Beach near Portsea, Victoria. It was the largest gathering of world leaders in Australia’s history.

1970: Prince Charles returned with the Queen, his father Prince Philip and his sister Princess Anne to celebrate 200 years since Captain Cook’s arrival in Australia. Younger brothers Andrew, 10, and Edward, six, stayed home in England, missing out on a trip to Sydney’s Royal Easter Show.

1974: Prince Charles enjoyed a dip at Bondi Beach and revisited Geelong Grammar while here to open the Anglo-Australian Telescope at Siding Spring in country NSW with then prime minister Gough Whitlam.

1977: He returned as Patron of the Queen’s Silver Jubilee Appeal for Young Australians – and gave an interview he has said he will never forget: with one extremely nervous Ian ‘Molly’ Meldrum on ABC’s Countdown.

1979: In one of his more memorable visits as a young bachelor, Prince Charles was ambushed in the surf at Cottesloe Beach in Perth by model Jane Priest, who stole a quick kiss.

1981: When he returned to open the 50th Anniversary Convention of Apex Clubs of Australia, the heir apparent to the British throne was newly engaged to Lady Diana Spencer.

1983: Prince Charles arrived in Alice Springs in March with Princess Diana and their 10-month-old son Prince William for the start of a six-week tour of Australia and New Zealand that attracted huge crowds and massive media coverage.

1985: The Prince and Princess of Wales visited Victoria to celebrate its 150th anniversary, where Diana dazzled all – in hospital wards to a charity rock concert with Molly Meldrum and Flemington for the Melbourne Cup.

1988: Prince Charles and Princess Diana returned for the last time as a couple as part of Australia’s bicentenary celebrations.

1994: A 23-year-old man was arrested after firing a starter pistol at Prince Charles as he prepared to hand out Australia Day awards in Sydney.

2012: Prince Charles and new wife Camilla, Duchess of Cornwall, marked the Queen’s Diamond Jubilee with a six-day tour that included Tasmania, Victoria, NSW and the ACT.

2015: Prince Charles and the Duchess of Cornwall toured Adelaide, Tanunda, Canberra, Sydney, Albany and Perth, where they celebrated his 67th birthday.

2018: This tour with Camilla involved opening the Gold Coast Commonwealth Games, visits to Brisbane, Cairns and the Northern Territory, and side-trips in support of efforts to help the endangered loggerhead turtles and the Great Barrier Reef.

Amazon Alternatives: 8 Great Places to Shop Online Aside from Amazon

How V From BTS Earned His 'Good Boy' Nickname

'Feel Good' Review: Love That Puts A Hurt On