Sir Keir Starmer has urged primary schools to reopen in England as soon as possible as he revealed that his own children have attended lessons throughout lockdown.

The Labour leader said his 11-year-old son and nine-year-old daughter were still going to state school in north London as his wife Victoria is an NHS key worker.

He said he hoped children across England would be able to return to school next month but added that “its got to be safe”.

It comes as British teaching unions on Friday urged the government to reconsider its plans to reopen schools for younger pupils in the week starting June 1.

However Sir Keir said it was important for Prime Minister Boris Johnson and those resisting the reopening, led by the hardline National Education Union, to reach a consensus on how to get pupils back in the classroom. 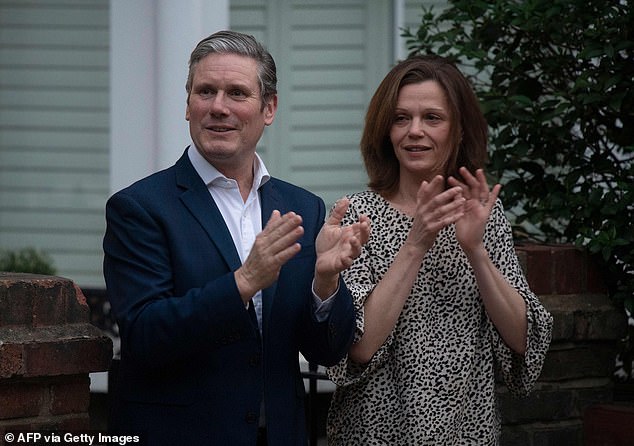 Speaking on the Telegraph’s Chopper’s Politics podcast, Sir Keir said: ‘Our children have been in school throughout [the lockdown] and it’s a reminder that this perception that schools are shut at the moment and the question of whether we open them is wrong.

‘They’re open at the moment, teachers, staff are on the frontline, every day. The question is, can we increase the numbers of children going back into school, and I want that to happen as soon as it can. But of course it’s got to be safe.’

Sir Keir added: ‘The task of the Prime Minister is to build consensus, to give people confidence. Most of the polling I’ve seen… show that parents are about 50/50, they’re genuinely worried… Rather than accentuating the differences here, the Prime Minister should pull a task force together, and say “right, we are going to lead from the front”.’

Sir Keir’s comments came on the day that a major review found children were half as likely as adults to catch Covid-19, with lead scientists saying the results pointed “strongly towards a return to school”.

Researchers at University College London found that under-20s were 56 per cent less likely to contract coronavirus, concluding that “children are the safest group to be out in the community”.

Mr Johnson wants primaries in England in Reception, Year 1 and Year 6 to go back to class from a week on Monday, with others to follow in a “phased” restart. 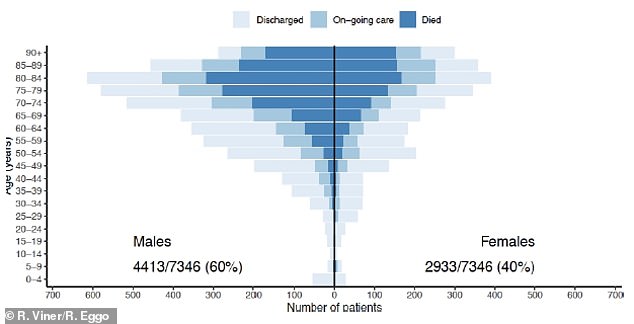 Data shows that children have made up a tiny proportion of hospital patients with COVID-19, and an even smaller number of deaths from the coronavirus. Experts say children appear to be at a lower risk of catching and spreading the disease 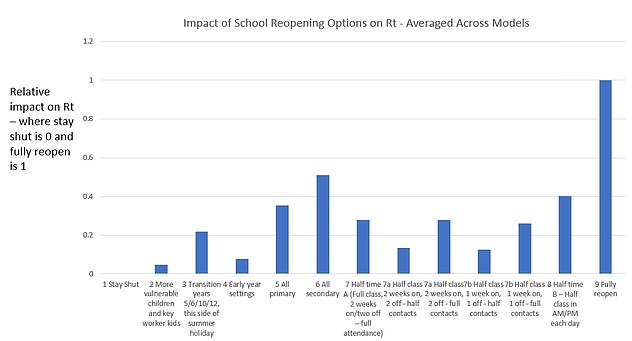 An assessment of various models of the impact of changes on the R rate shows the impact, on a scale of zero to one, would be 0.24 if classes were split and attended alternate weeks

But it has sparked concern among some teachers and parents, as the death rate in Britain, at more than 36,000 already the highest in Europe, keeps rising by hundreds each day.

Mr Johnson said this week he had ‘growing confidence’ that a tracing scheme would be in place by June 1, but there remain questions over whether this is possible.

Several local authorities in England have said they were unlikely to be able to reopen schools by the start of next month.

Education is a devolved matter for the governments in Scotland, Wales and Northern Ireland.

Yesterday the government’s SAGE experts warned the ‘shock’ of school closures are blighting a generation and suggested children are at low danger from coronavirus.

Evidence produced by the Scientific Advisory Group on Emergencies highlights the wider damage being caused to young people by the halt to their education.

The documents float the idea of splitting classes in half and having children attend schools alternate weeks, saying that could slash the effect on the ‘R’ number. 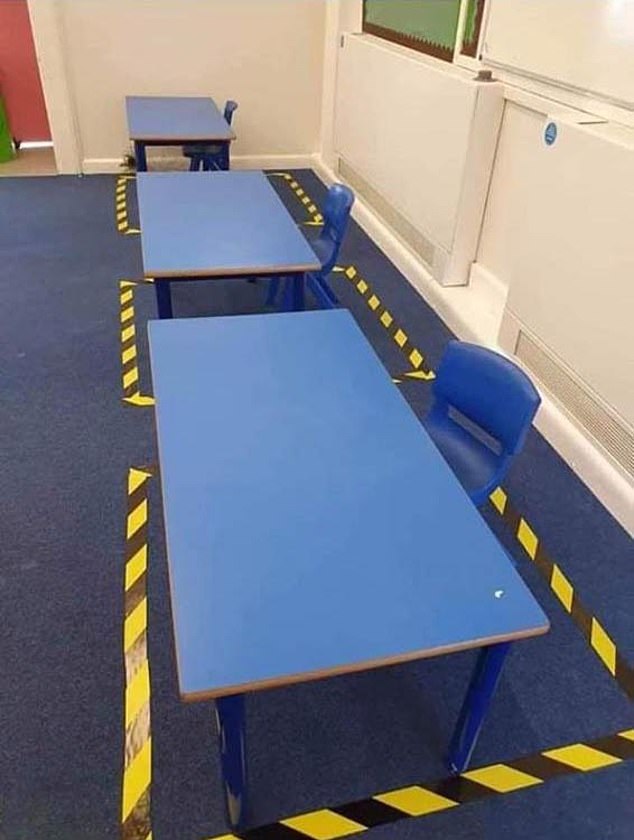 Ministers hope publishing the documents will reassure the public about plans to start reopening schools from June 1.

But teaching unions insisted the SAGE evidence was ‘inconclusive’ and demanded delay.

But he stressed that was the case for any change to lockdown, and schools were ‘not a high risk area for R’.

The risk of children catching coronavirus is ‘unbelievably low’, according to one of the UK’s top experts.

Eminent statistician Sir David Spiegelhalter said data has also shown that teachers do not have a greater risk of becoming infected.

The University of Cambridge professor’s testimony comes amid an explosive row over the reopening of schools next month.

Professor Spiegelhalter pointed out that just one out of 7million children aged four to 14 in England and Wales has died from COVID-19.

He also claimed children carry just a fraction of the viral load compared to adults, which significantly reduces their ability to fall ill or infect others.

Professor Spiegelhalter told the BBC: ‘There have been, based on the data so far, extremely low risks to children. Out of 7million five to 14-year-olds in England and Wales, so far the number of death certificates revealed with Covid on it is one.

‘There will be more [that haven’t been confirmed], but there is still an extremely low risk. Of course we must remember this group of kids are staggeringly safe in general, less than one in 10,000 die every year. Nobody’s ever been safer in the history of humanity than this group of kids.’

Professor Spiegelhalter said that at least one child had died from a rare inflammatory illness linked to coronavirus, but reassured parents that the risk of the complication would now be ‘much lower now the epidemic in the community is under control.’

Asked about whether teachers and parents were being put at risk by schools reopening, the Cambridge professor said data suggested not.

He added: ‘The Office for National Statistics analysed Covid risks by occupation – some have higher risks, including bus drivers and care home workers.’ But teachers were not included in this category, he said.

‘Of course people are anxious about the rest of the family, but in healthy young parents aged between 20 and 40, there have only been about 30 death so far out of 30,000 who don’t have existing conditions.

‘There’s about a three in a million chance of risk of death. That’s a measurable risk, but in a sense it’s a manageable risk… it’s not overwhelming at all.’

Sir Patrick said: ‘The risk for children (from coronavirus) is much lower – we know that.

‘They are at low risk but not zero risk and there have been some serious cases of children, of course, but very few compared to adults and older age groups.

He also delivered a shot across the bows of the government by noting that having test in trace in place was important when you were modifying lockdown.

Many of the concerns about schools returning appear to be over the knock-on impact on social distancing, with more mixing of families and parents returning to work.

A paper produced for a SAGE subgroup on schools for April 16 warns that ‘a cohort of children have experienced a shock to their education which will persist and affect their educational and work outcomes for the rest of their lives’.

The report, prepared by experts from University College London, King’s College London, the London School of Hygeine and Tropical Medicine, and the University of Exeter, said such experiences were ‘associated with worse long-term health outcomes, and will likely exacerbate existing societal inequalities (eg. across deprivation)’.

The group said it ‘cannot be clear’ the extent to which schools can be reopened without fuelling the virus.

Although the risk to pupils going back to school was ‘very, very small’ it was ‘not zero’.

An assessment of various models of the impact of changes on the R rate shows the impact, on a scale of zero to one, would be 0.24 if classes were split and attended alternate weeks.

If half the class went in in the morning and half in the afternoon that would rise to 0.4. The maximum impact of one would be if schools came back completely.

A document from a behavioural insight meeting on May 1 said: ‘Although not initially one of the options proposed by DfE, options 7b (classes split in two, with children attending on alternate weeks) emerged from the joint discussions as having particular potential merit for further consideration.’

The findings will likely add to arguments with unions over whether it is safe for children to return, and if it can be achieved without triggering another flare up of the virus.

The files emerged as a SAGE source claimed Government plans to reopen primary schools are grounded in welfare concerns rather than evidence younger pupils are less vulnerable.

In the first phase of his back-to-school blueprint, Boris Johnson wants children in England in reception, Year 1 and Year 6 to go back to class on June 1.

However, the exact shape of the reopening is being left in the hands of headteachers.

Teaching unions have been threatening to boycott the move over safety fears, while a slew of councils have said they will not fall into line. 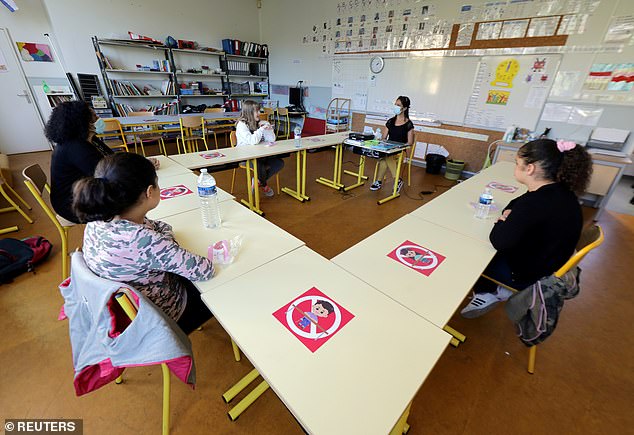 Children have half the chance of catching coronavirus as adults, leading British scientists have found (Primary school children in Nice, France)

Judge brands Britain’s legal system ‘beyond the point of collapse’

Woman, 20, ‘killed by boyfriend’ on parole for murdering ex-girlfriend after being released for jail just a month before

I’m a savvy mum & bought my Christmas presents last year, I saved £700 in the boxing day sales & they're already wrapped | The Sun