A tired King Charles will now ‘recuperate’ at Balmoral following his mother’s funeral before resuming his duties – with France reportedly set to be his first foreign trip.

The new monarch, who has entered a seven-day period of royal mourning, is said to have chosen the country as a surprise first destination after bonding with Emmanuel Macron over environmental issues.

Rather than visiting one of his Commonwealth realms on his first overseas trip, Charles is increasingly expected to head to Paris as soon as next month in a tour that could also include Germany.

The Foreign Office, which makes the final decision on royal visits, is said to be keen to use the diplomatic power of the monarchy to repair relations with major European neighbours post-Brexit. 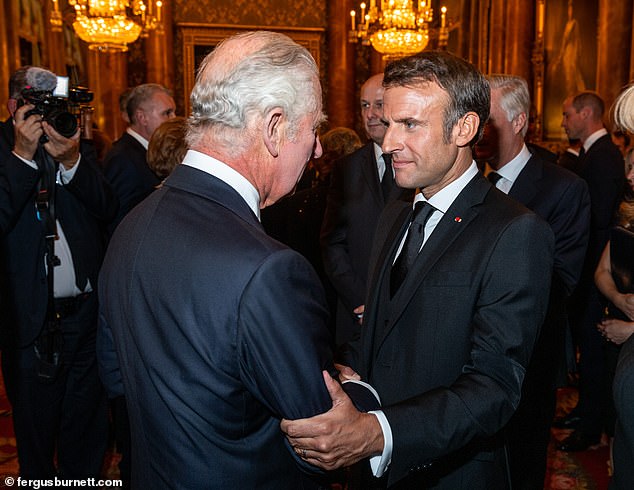 The King and Queen Consort arrived in Scotland yesterday for a short break to mourn the loss of the late Queen.

But sources close to the monarch said he was ‘buoyed’ by the outpouring of public support in recent days, and his staff are now busy behind the scenes putting project Grandfather of the Nation into full swing.

Sources close to the King say he is still grieving and feeling tired after an exhausting two weeks packed with official engagements.

“Balmoral is a place where the King can see his family and at the same time read his red government boxes,’ a source told The Sun.

“It is a place where he can recuperate and get on with state business. This is exactly what the Queen Consort said Her Majesty Queen Elizabeth II liked to do when she gave her tribute.”

As well as creating a useful opportunity to cement ties with a leading European power, a trip to France could also help draw attention to a major African tree-planting scheme which both Charles and Mr Macron support, reported The Telegraph.

While the King cannot express his opinion on political issues, Mr Macron could organise for the visit to include an exhibition about the Great Green Wall project.

The ambitious initiative aims to plant a 30-mile-wide belt of trees across the whole African continent to delay the spread of the Sahara and fight climate change.

King Charles and Mr Macron are said to share a ‘warm friendship’, and last year shared a platform at Cop26 in Glasgow to encourage what the royal called a ‘precious opportunity’ to help save the planet.

The French president was widely praised for his touching tribute to the Queen in English, which praised her ‘wisdom and empathy’, adding: ‘to you, she was your Queen. To us, she was the Queen’.

He also confirmed he had invited the King to make a State visit to France, saying: “I had the opportunity to invite King Charles to come to France when it is appropriate for him.’ 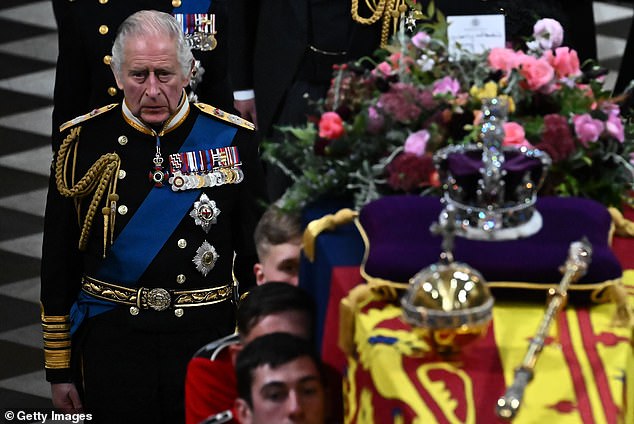 Any trip to France would be followed by a long-haul trip to a Commonwealth realm, it has previously been reported – with the King needing to make up for lost time after Queen Elizabeth II was unable to travel for seven years due to health problems.

Visiting Germany after France would make sense given its status as a major European power. It was one of the last countries visited by the late Queen and Prince Philip. They went in June 2015 with David Cameron, who was then PM.

Although no plans for any overseas trips have been set in stone, Charles is expected to go to Australia and New Zealand early next year. He went to Canada in May, but has not gone to Australia since 2018.

Yesterday, the King, 73, and Camilla, 75, left Windsor Castle, where they stayed overnight on Monday following an emotional private interment, and swept into RAF Northolt in north-west London at just before 10.30am.

His police outriders removed their helmets and bowed while he boarded with his wife, with the plane arriving at Aberdeen at noon. Although the ten days of national mourning have now ended, the Royal Family are continuing to observe their own extended period of mourning until next Monday evening.

All their public engagements have been cancelled and the flags at royal residences will remain flying at half-mast until 8am on Tuesday. 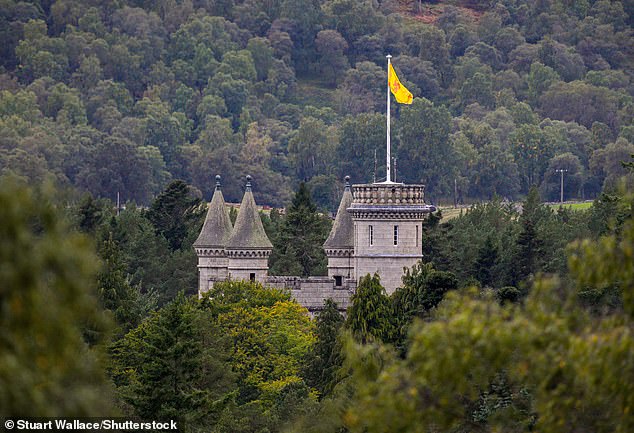 A source said Balmoral (pictured): ‘Is a place where the King can see his family and at the same time read his red government boxes’

The King and Camilla will spend at least the next week – and possibly even beyond – at Birkhall, the Queen Mother’s old home on Royal Deeside, whose estate lies next to Balmoral.

It was part of a long-standing plan known as Operation Spring Tide. He will, of course, continue to deal with the necessary affairs of state over the next few days, but away from the public eye.

Behind the scenes, however, work is well under way for a still very much ‘engaged, dynamic and enthusiastic’ Charles to pick up his relentless work schedule when his period of mourning is over.

It is expected that he will continue to support the many charities he has raised millions for over the years, but in a different way.

‘He is incredibly mindful of the extra focus that comes from being the King and that things can’t carry on exactly as they were before,’ a source said.

His private office is already ripping up many of the plans it had in place, with a visit to flood-stricken Pakistan next month one of the first engagements to go.

But staff are also understood to be working out how to dovetail other existing commitments with the burden of his new duties.

It is something that no one felt in a position to do while the late Queen was still alive and Operation London Bridge, the Queen’s funeral plans, and Operation Spring Tide were still in full flow.

A source said: ‘The King is phenomenally thoughtful and passionate. The things he deeply cares about are still relevant, they haven’t become irrelevant because he is King. The difference is he will no longer be interventionist.

‘His hope is that he will be able to support and encourage and convene instead.

‘Staff will be carefully focusing on how to get the balance right.’ 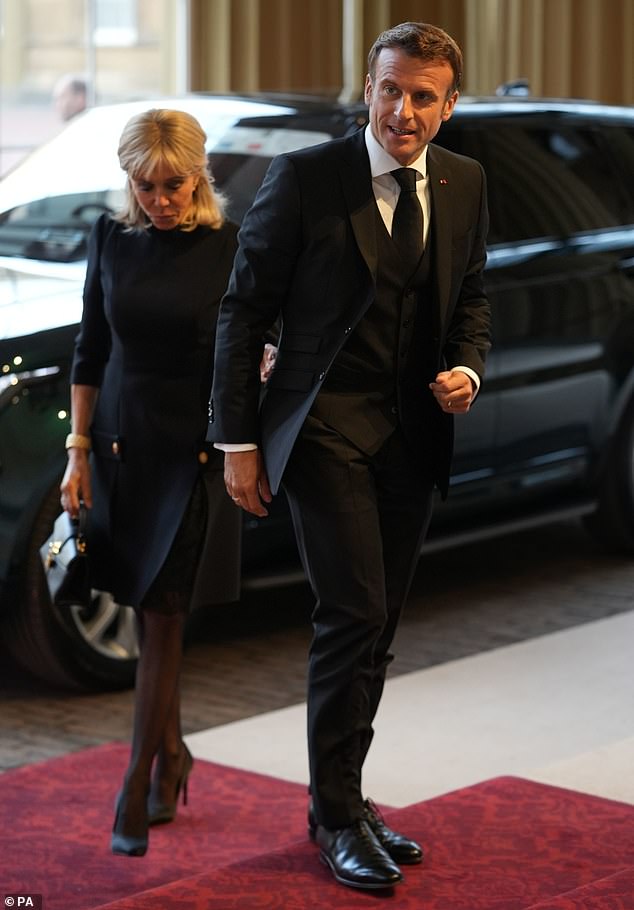 Mr Macron and his wife, Brigette, arrive at the gathering at Buckingham Palace on Sunday

Charles is understood to have been ‘touched and encouraged’ by the public reaction in recent days, especially given some of the challenges he has faced over the years.

‘Anyone who has worked with him knows that rest and relaxation are not on his priority list,’ a former senior royal aide said.

‘It will require all the guile of his team and the Queen Consort to persuade him that he doesn’t have to take on everything at once.’

While the King will base himself at Buckingham Palace, sources said no one should expect ‘to see the removal vans outside Clarence House just yet’.

The court remains in mourning, and Clarence House, which has been Charles and Camilla’s home for many years, is where they feel most comfortable in London.

But in the long term he has made it clear that Buckingham Palace will be their permanent residence.

News of his possible trip to France comes as the new Prime Minister held conciliatory talks with Mr Macron yesterday after previously questioning whether he was a ‘friend or foe’.

Liz Truss avoided difficult issues such as the Channel migrants crisis and the Northern Ireland Protocol as she sought to smooth over relations with the French President.

Downing Street said the two leaders had a ‘constructive’ half-hour meeting in New York, where they are both attending the UN General Assembly.

Discussions are said to have focused on energy security and the need for a united response on Ukraine. 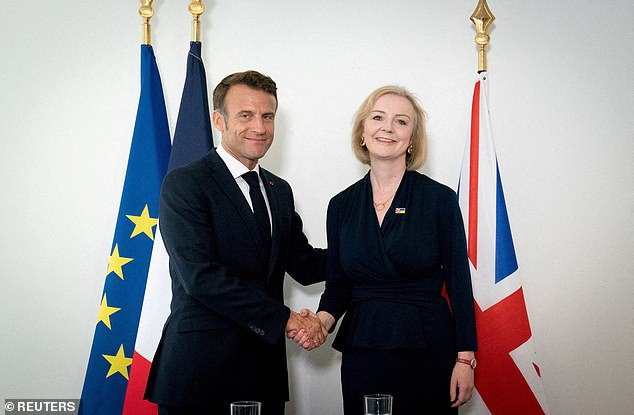 Speaking ahead of the meeting, a Whitehall source acknowledged the PM may need to bury the hatchet with the French President after she jokingly questioned whether he was a ‘friend or foe’ during the Tory leadership contest.

The source said: ‘That comment obviously didn’t land well with him, but he’s a politician – he understands that things get said during the heat of a campaign. In the end we have a very strong relationship with France – it will be fine.’

Speaking afterwards, Mr Macron appeared happy to put the issue in the past, saying: ‘I now believe in proof, in results.

‘There is a will to re-engage, to move on and to show that we are allies and friends in a complex world.’

Miss Truss’s spokesman confirmed they did not discuss the post-Brexit agreement on Northern Ireland or migrant crossings, which have not abated.

He said the Government intended to resolve protocol issues with the EU, adding: ‘This is not an issue that necessarily we believe can be solved through one single EU country.’

Will Tormund Die In ‘GOT’ Season 8 Episode 3? These Fan Theories Will Leave You Hopeful