His Majesty will welcome Mr Sunak – at 42 Britain’s youngest Prime Minister – to Buckingham Palace this morning for the ceremonial procedure.

It is expected to come just moments after Mrs Truss meets Charles to hand her notice in, effective immediately.

Mr Sunak will be hoping for a less attention-grabbing introduction to the new monarch than his predecessor received.

Televised footage of Mrs Truss meeting Charles showed him muttering ‘dear, oh dear’ as some of his first words to her.

Just over a month earlier she had been at the late Queen’s final engagements before her death.

Unusually – and due to Her Majesty’s health – she had travelled to Balmoral to meet her as PM. 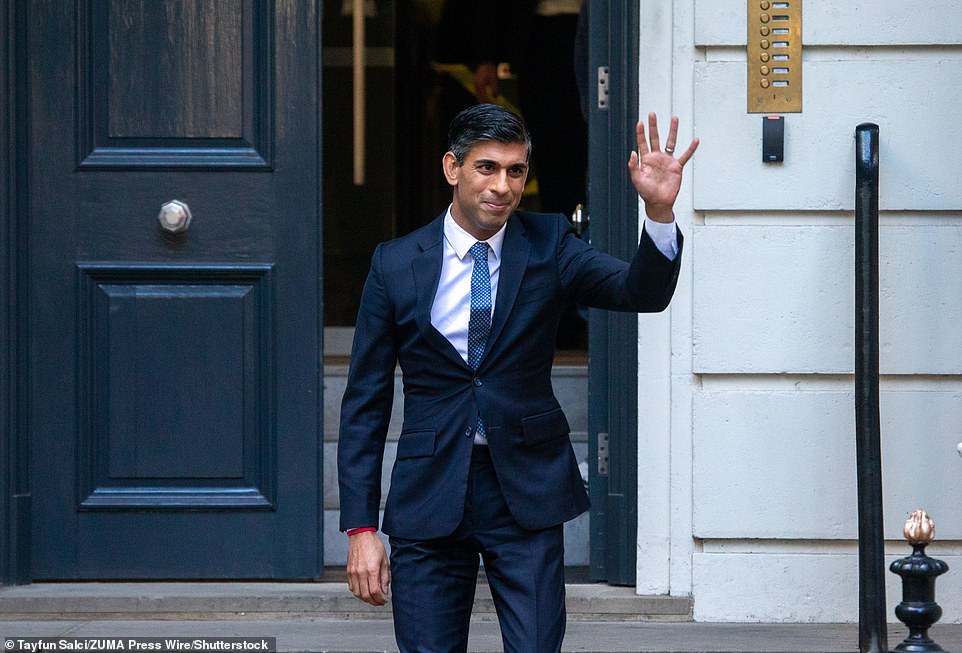 New PM Rishi Sunak will meet King Charles, who will welcome him and officially ask him to form new government today 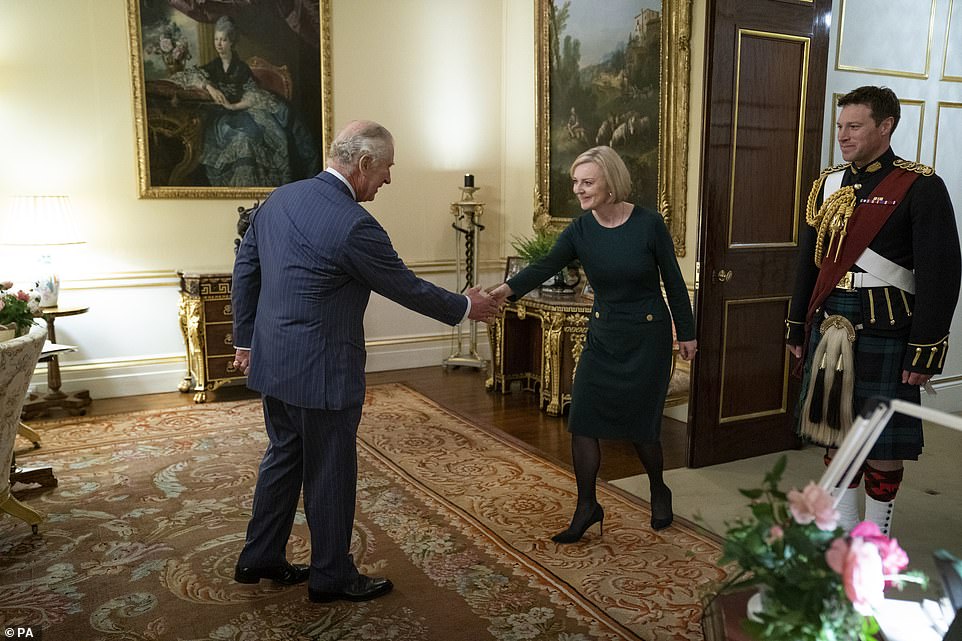 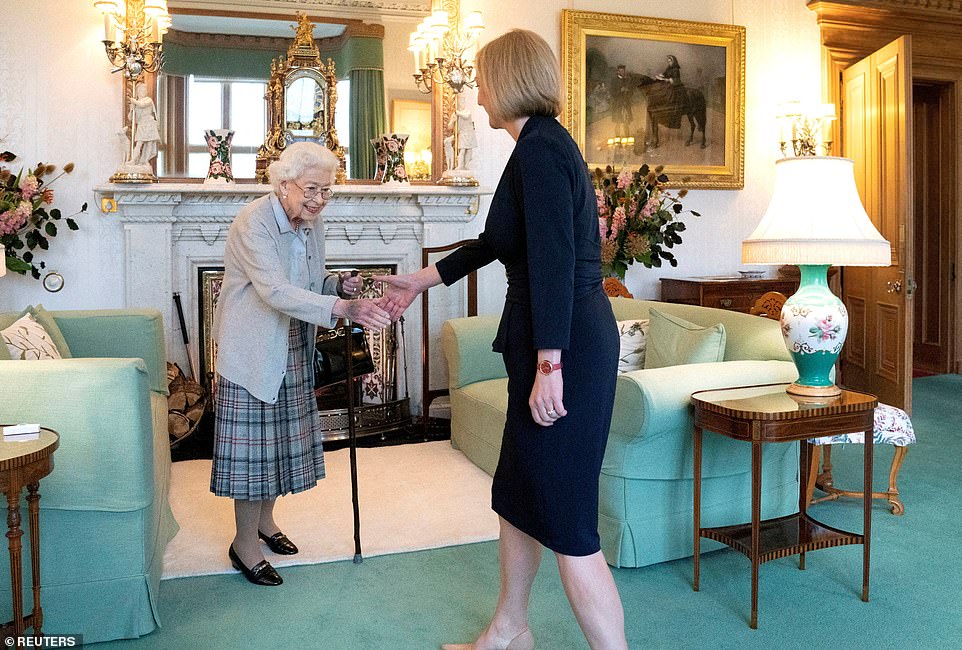 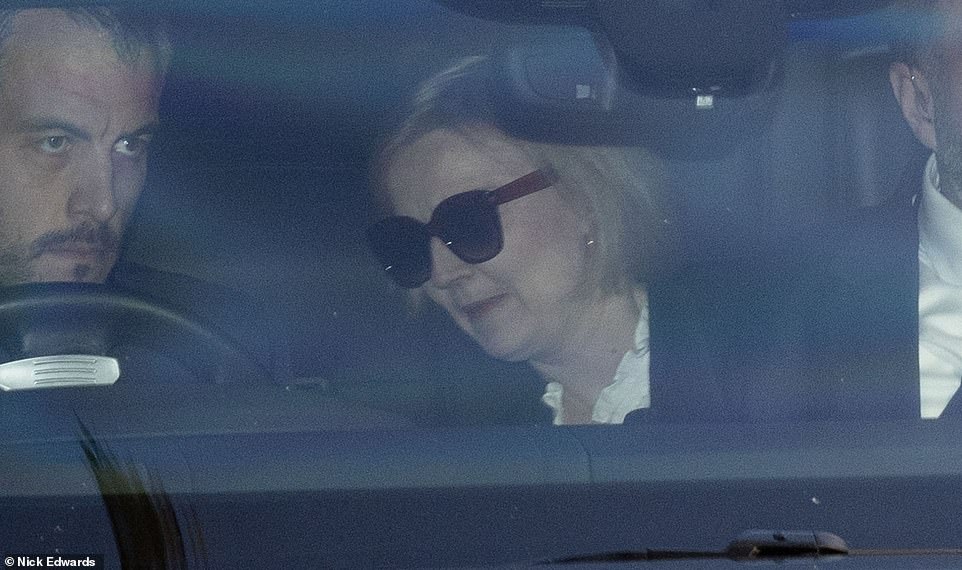 Mr Sunak’s appointment with Charles will happen in the palatial surroundings of Buckingham Palace in London.

It will be the first time in the new King’s reign he will ask a new PM to form an administration.

The manner of the greeting between Mr Sunak and Charles is not currently clear, as previously Truss, Boris Johnson and Theresa May have all kissed the Queen’s hand.

After it takes place, Buckingham Palace will issue a Royal Communication confirming Charles has ‘Requested him to form a new administration’.

The new PM will then give his own address to the nation from outside No10, and turn his mind to forming his first Cabinet.

Aides have insisted Mr Sunak will create a ‘big tent’ rather than only promoting his allies as Ms Truss did. Jeremy Hunt is almost certain to stay on as Chancellor, a week before the crucial Halloween Budget and after the markets calmed somewhat, while Grant Shapps could hang on to the Home Office. 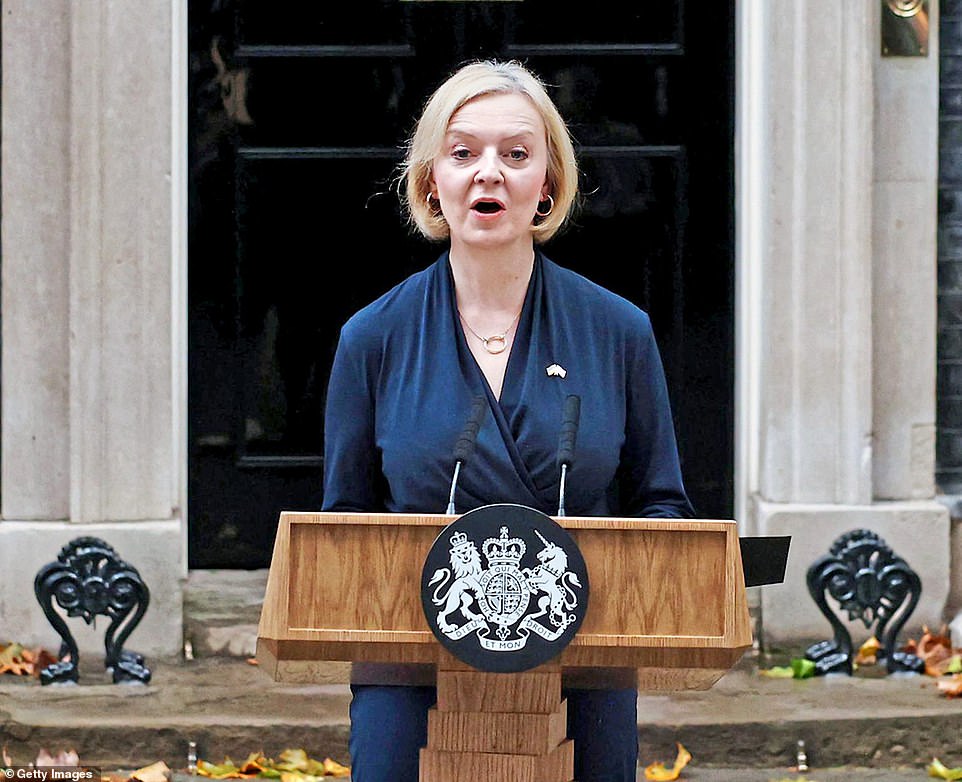 Liz Truss (pictured announcing her resignation last week) is gathering her Cabinet one last time, and will make a valedictory speech in Downing Street just after 10am as she draws a line under a disastrous 49 days at the helm of the country 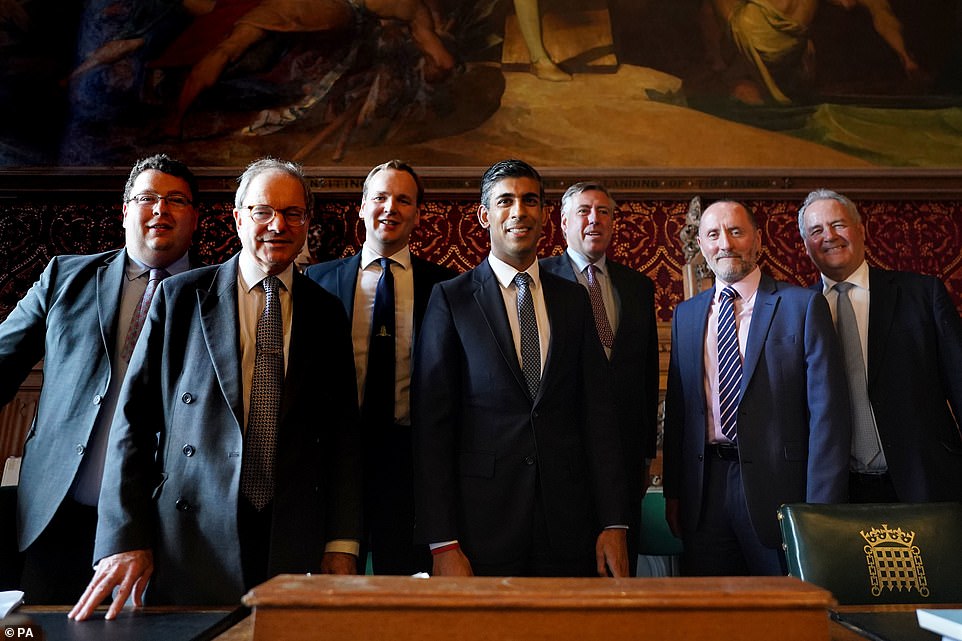 But he is expected to find a big job for leadership rival Penny Mordaunt, as well as right-wingers such as Suella Braverman and Kemi Badenoch. There could also be returns for Michael Gove, Dominic Raab, and former education secretary Gavin Williamson.

Foreign Secretary James Cleverly, who backed Ms Truss over the summer and then Boris Johnson’s abortive comeback bid over the weekend, is likely to make way – possibly for Ms Mordaunt.

An early area of tension will be military spending, with respected Defence Secretary Ben Wallace seen as at risk after Mr Sunak refused to commit to increasing budgets to 3 per cent of GDP by 2030.

The new premier told MPs yesterday that he wanted his government to represent the ‘views and opinions’ from across the Conservative Party. 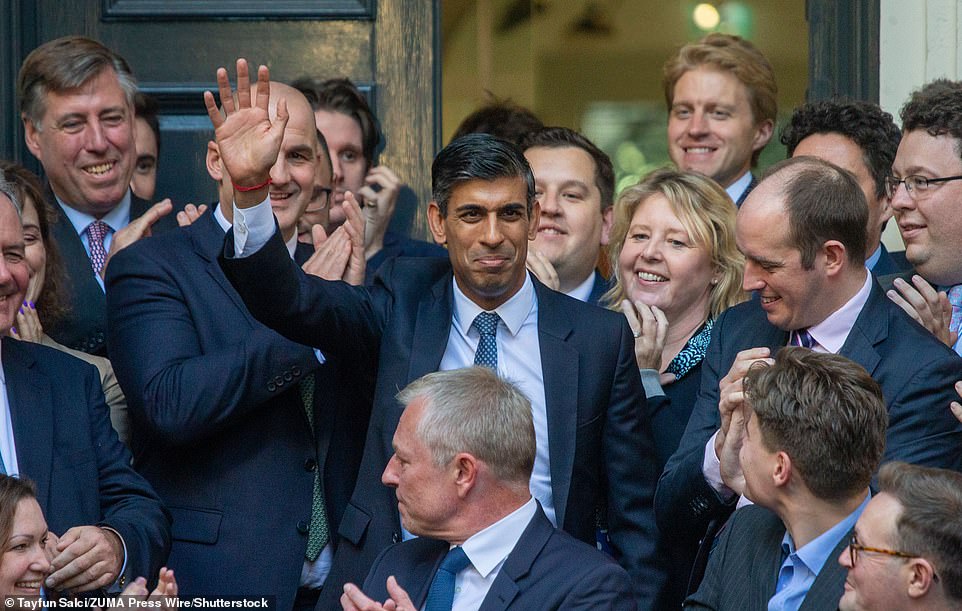 Mr Sunak has pledged to run No10 with ‘integrity and humility’, but warned of ‘profound challenges’ to come as he prepares to begin his premiership 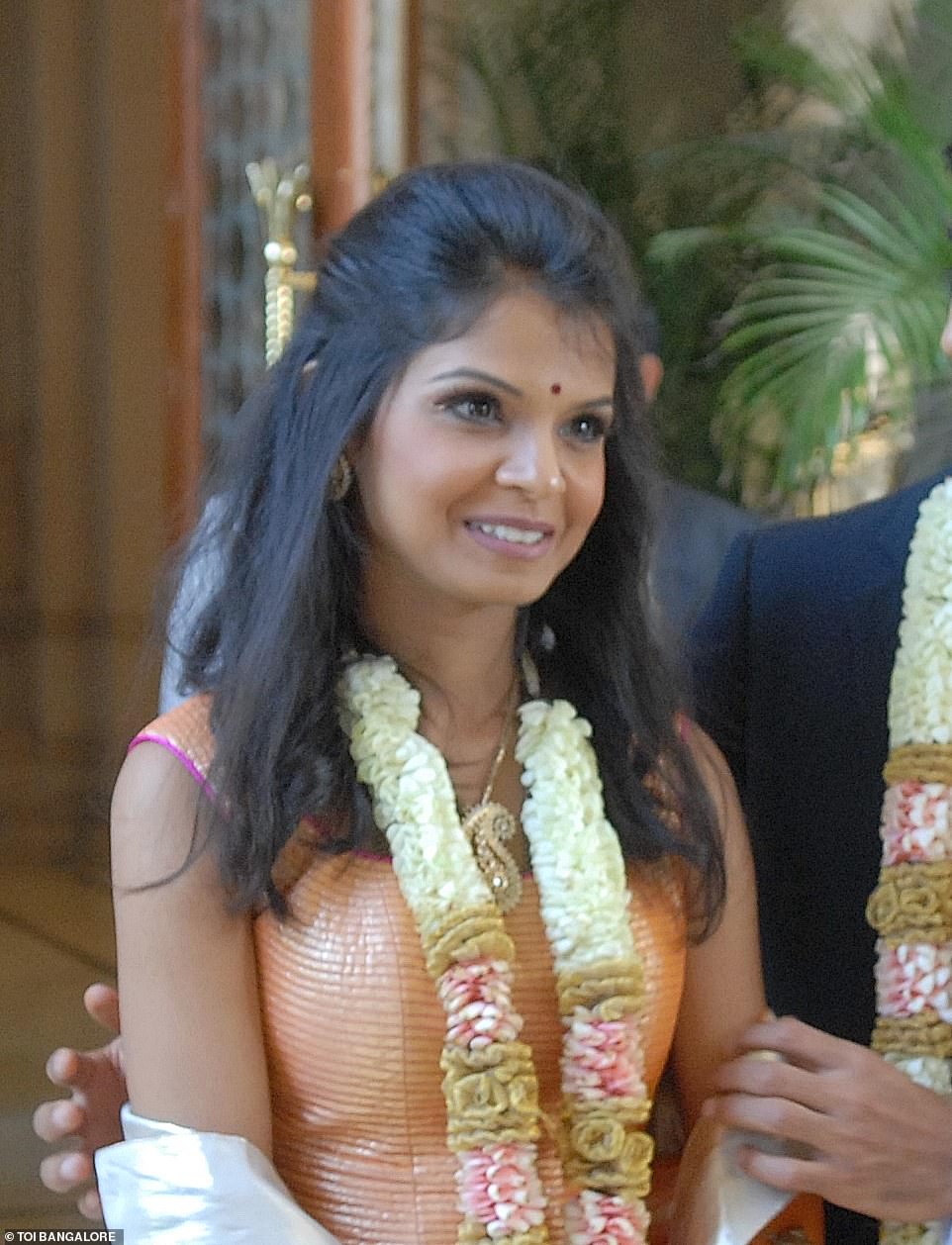 Sunak’s wife Akshata Murthy hails from Indian business aristocracy: her father is Narayana Murthy, a billionaire sometimes dubbed the ‘Bill Gates of India’ who founded a software firm Infosys in the early 1980s and is now the country’s sixth richest man

He pitched himself as ‘Mr Spreadsheet’ during the last leadership race in the summer before withdrawing and throwing his weight behind his good friend Mr Sunak.

Mr Sunak may want to reward his loyalty and avoid more turbulence at the Home Office, but he could give the job to one of his supporters from the Right.

Suella Braverman is thought unlikely to return to the job, but Dominic Raab could be promoted.

Elsewhere, Defence Secretary Ben Wallace is not a natural Sunak supporter and had said he was ‘leaning towards’ backing Mr Johnson.

There is also a potential showdown looming over defence spending.

Sources suggested he could resign if Liz Truss’s pledge to increase it to 3 per cent of GDP by the end of the decade is broken.

However, last night allies said Mr Wallace had no plans to quit and was keen to keep talking to Mr Sunak.

Losing him could also undermine attempts to unite the party. He scores highly in polls of Tory supporters.

James Heappey, a junior defence minister and rising star, backed Mr Sunak for the leadership and could be promoted.

Married at First Sight Australia cast: Who is taking part in season 9?

Man suspected in 6 killings, most targeting women, arrested in Missouri