KOBE Bryant and his daughter Gianna safely flew over the site where they lost their lives on Sunday just one day prior on the same helicopter and with the same pilot.

Pilot Ara Zobayan successfully guided the very same Sikorsky S-76 from John Wayne Airport in Orange County to Camarilo Airport on Saturday morning,and once again that night to return Kobe and his daughter to their Newport Coast mansion. 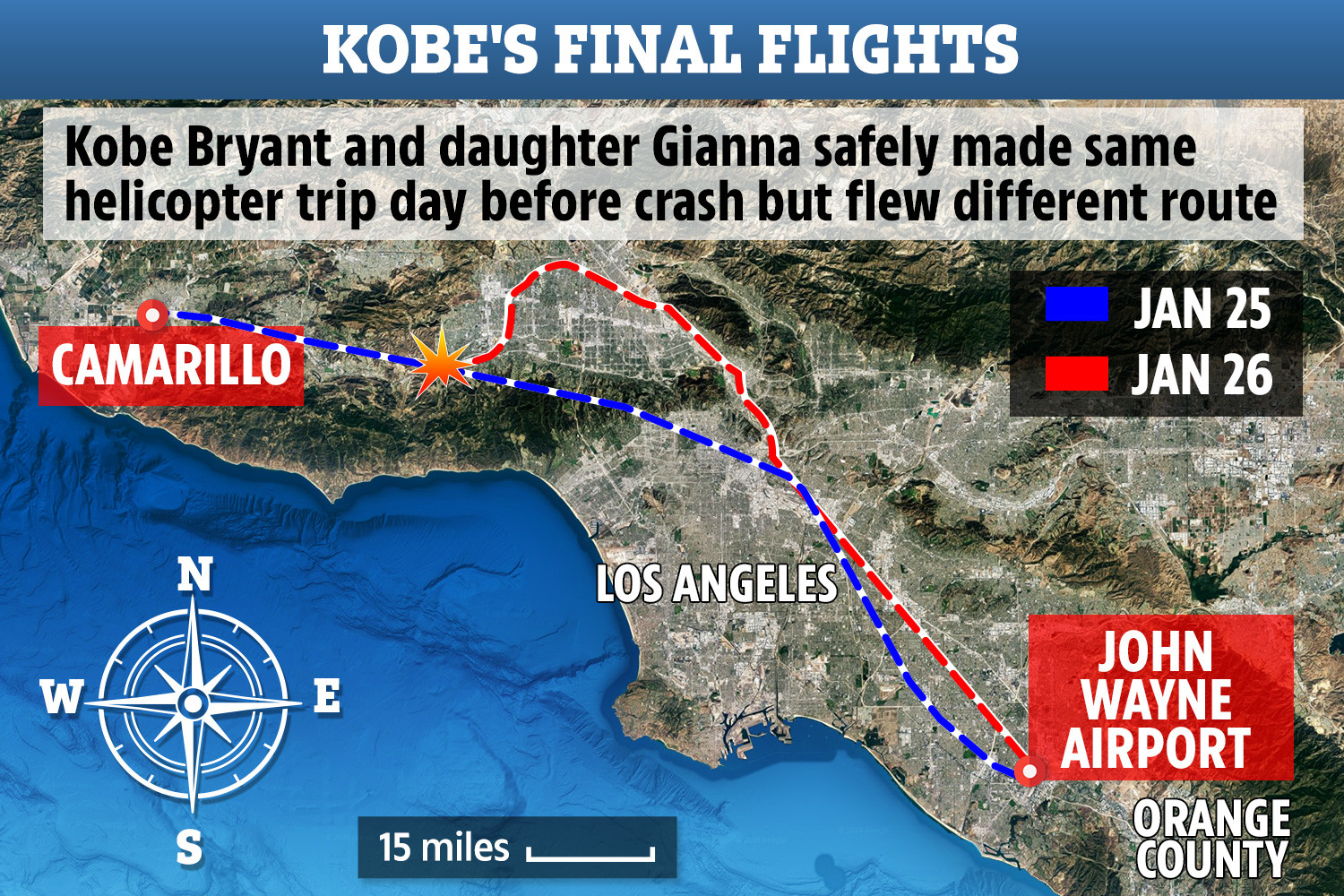 Sunday actually marked the sixth time this month that Ara had flown out of John Wayne Airport bound for Camarilo with Kobe and his daughter.

The two would use the aircraft to commute from the athlete's home in Newport Coast to his Mambo Sports Academy in Thousand Oaks, where Kobe coached his daughter's Gianna's travel basketball team.

On all five previous trips, the helicopter had travelled on a relatively straight path, which stayed closer to the coast.

The pilot would fly due north for the first leg of the trip, steering the helicopter approximately 10 miles west of Los Angeles International Airport.

Once past the airport, the helicopter would turn northwest and travel in another straight line to Camarilo Airport.

This leg would take the group right over the site of Sunday morning's fatal crash.

That flight also required the pilot to stay at or above 2,000 feet for the second half of the journey flight records show, something that was not possible given the conditions on Sunday.

This helped the helicopter stay clear of the peaks in the Santa Monica Mountain range and Simi Hills, something that would be no problem for a pilot like Ara who had logged 8200 flight hours.

The trip took just 30 minutes on average until Sunday, when the plane crashed just south of its destination after 40 minutes in the air. 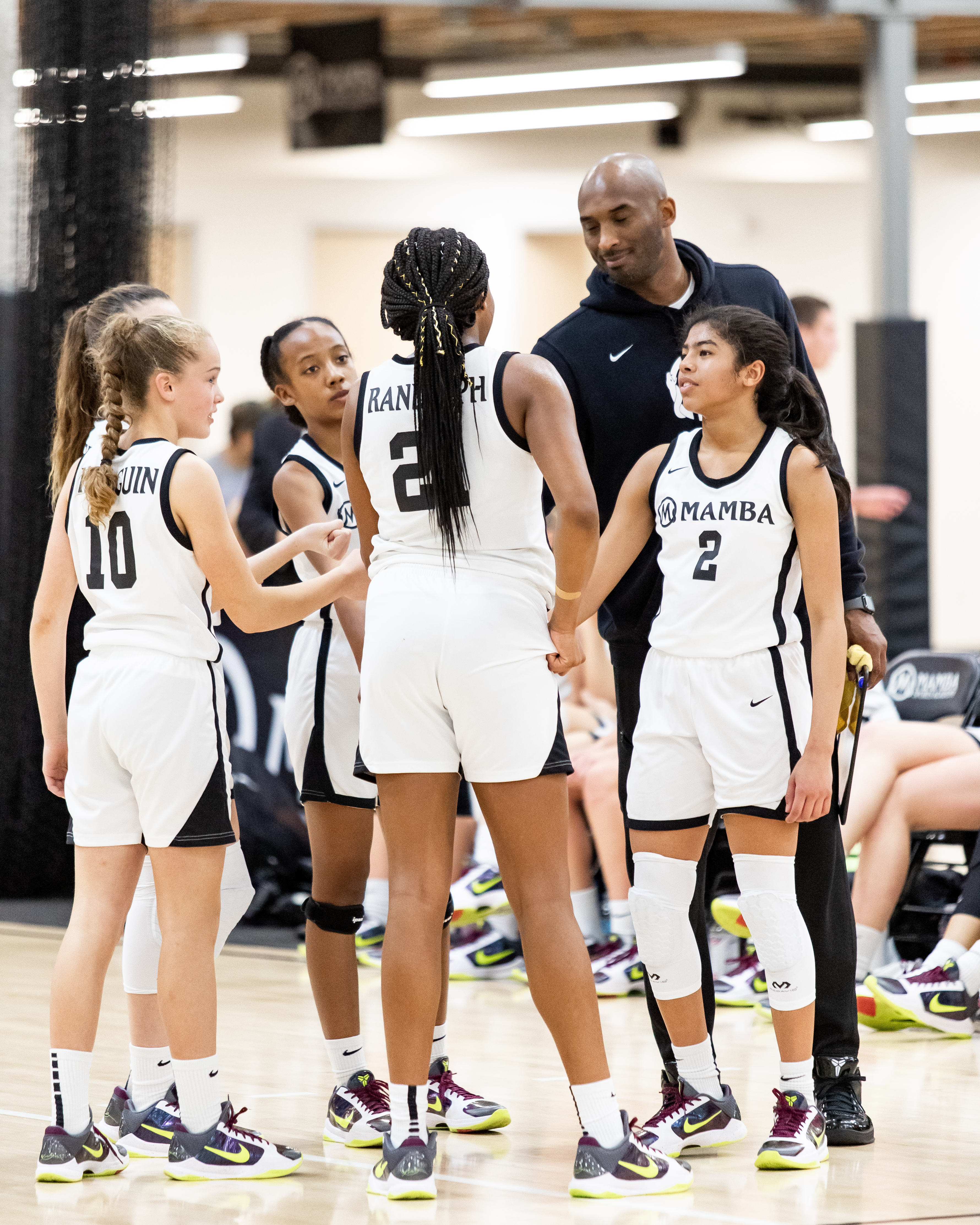 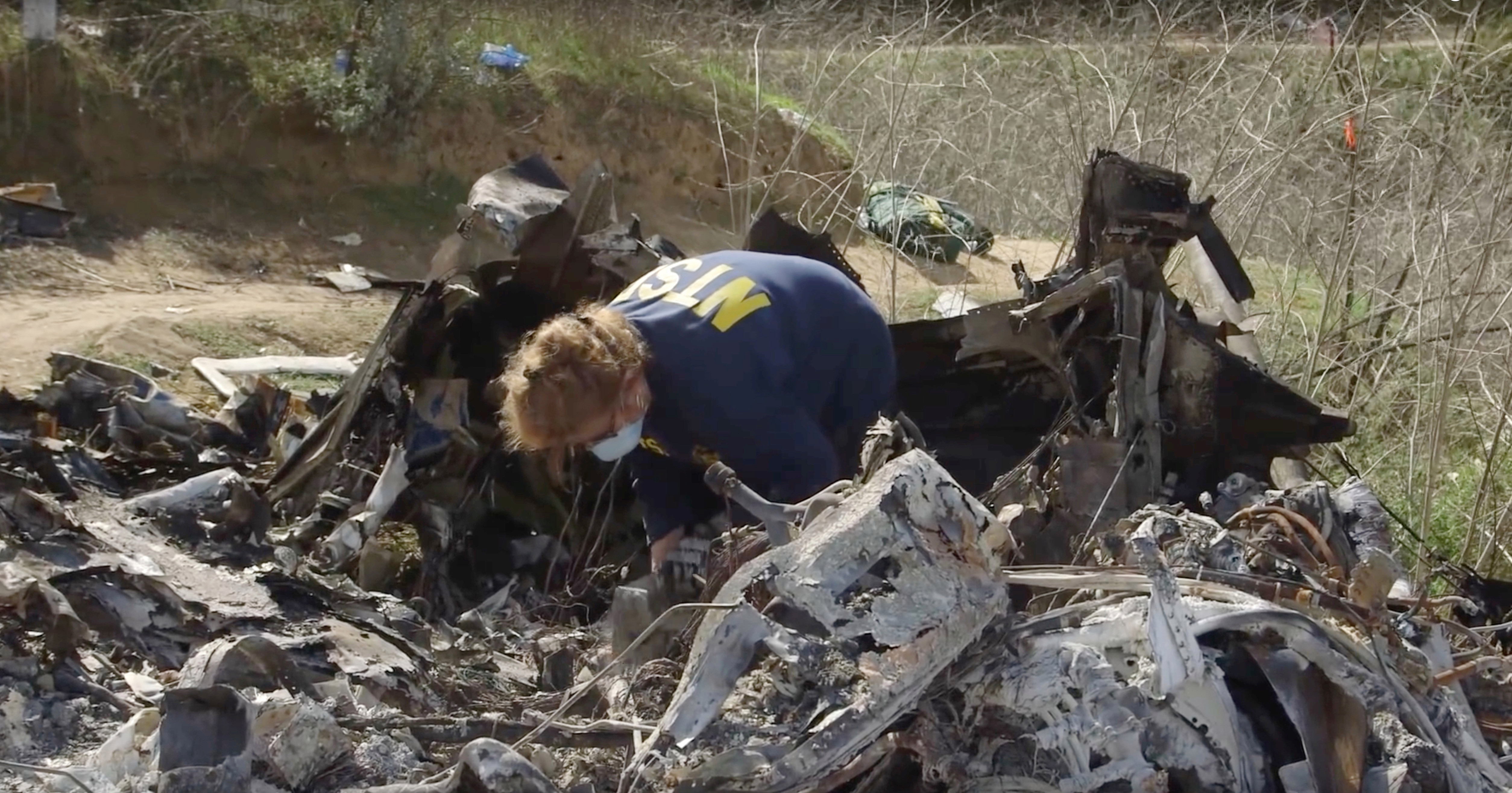 It was very different and a far more challenging exercise on Sunday, but one that Ara was trained and licensed to perform.

He was not only approved to fly under instrument flight rules but also certified to train other pilots in that area.

The helicopter started out on its normal route but remained just 500 feet off the ground, allowing it to travel in the fog while viewing the terrain below.

It would appear that the pilot might have been hoping conditions would clear judging by the fact that after starting of its normal course, the helicopter turned northeast a few miles into the trip and began circling around Glendale while communicating with the Burbank tower.

The helicopter continued on only after the airspace was cleared by the flight tower and the pilot had obtained a clearance to fly under instrument flight rules.

Ara stayed low as he started out on this leg of the journey, following the freeway below to avoid Mt Hollywood to his west and and Mt Thom to his east as he crossed into the San Fernando Valley by avoiding.

The helicopter then continued northwest over Route 5 before making a southwest turn to travel down the 405 and finally a due west turn to get on the 101, the freeway that would take the helicopter to Camarilo. 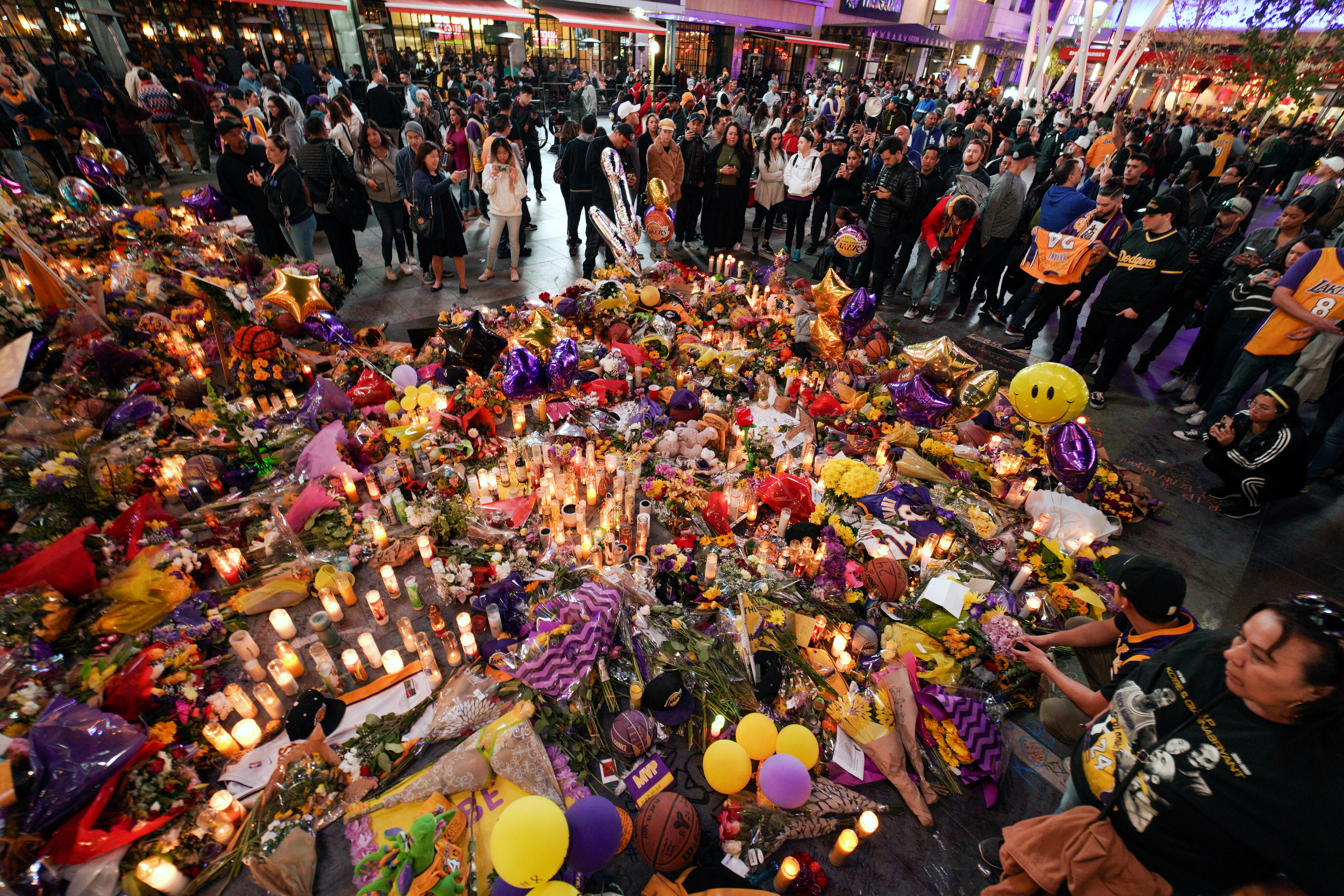 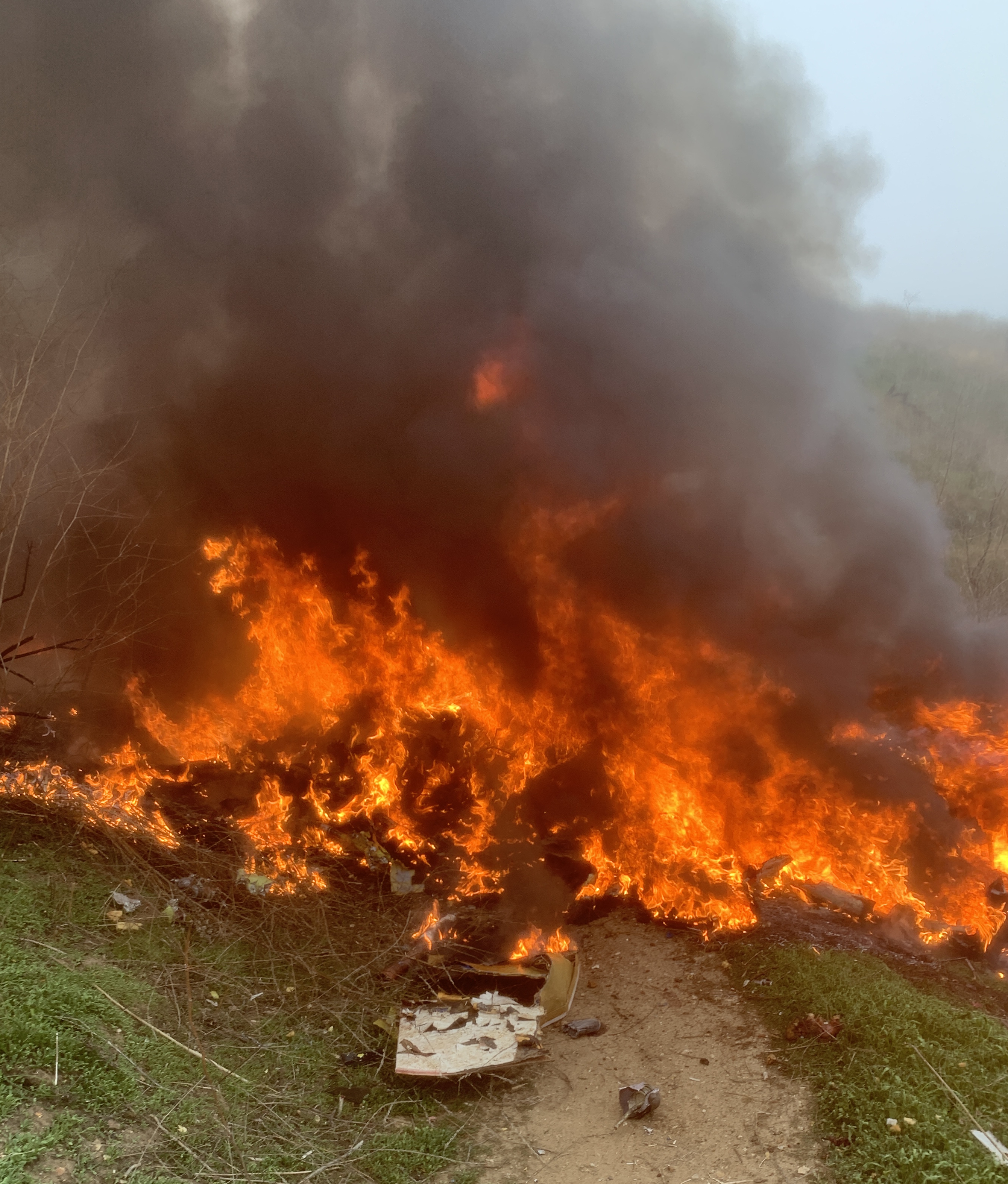 A few minutes before the crash, while flying over the 101, the helicopter was transferred over to a third tower.

The SoCal tower was not able however to communicate with the pilot though, who went out of range soon after he began flying over the 101 on the final leg of the journey.

It was at the exact location that the freeway veers from west to north that the crash occurred according to flight records.

The helicopter needed to turn north to avoid the Santa Monica Mountains to its west and south and the Simi Hills on its east.

Instead, the plane made a sudden and sharp southeast turn while rapidly ascending ti a height of 2300 feet and then descending close to 1000 feet as it plummeted from the air into the side of a mountain.

Investigators are still recovering evidence from the debris field to determine if the crash was mechanical or human error.

The Sun spoke to multiple helicopter pilots over the past few days, a number of whom suggested that the crash looks to be a case of spatial disorientation.

Autopsies for the first few victims were completed by Wednesday morning, with the Los Angeles County Coroner's office listing the cause of death as blunt trauma and stating that the case had been closed. 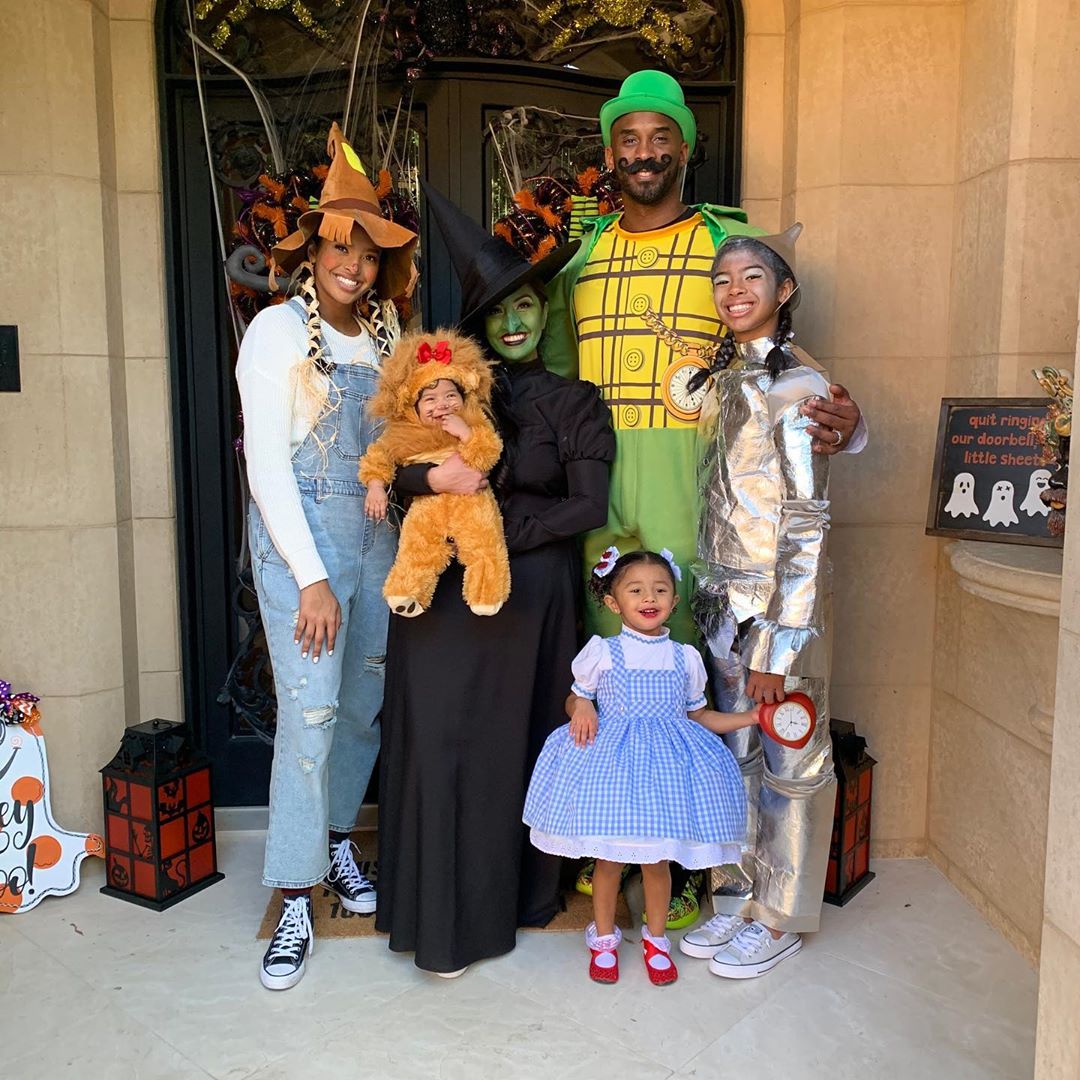 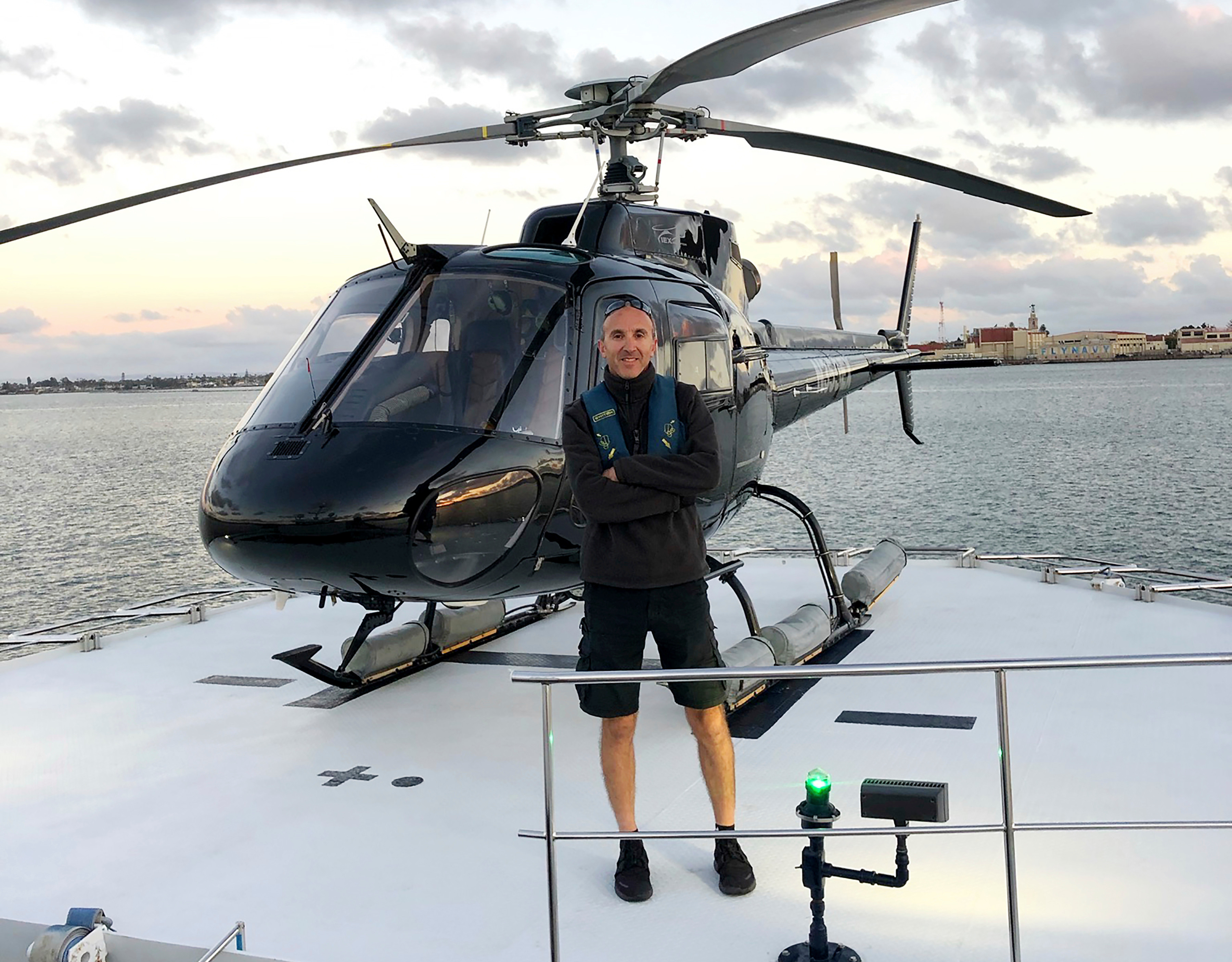 At the time of his death, Kobe had been trying to rekindle his relationship with his parents after years of tumult.

The families of the other victims meanwhile have all spoken out about their heartbreak in recent days, and in some cases travelled to the crash site.

The father of victim John Altobelli told The Sun that the coach’s surviving daughter Lexi, 16, was travelling to Calabasas with her older half-brother JJ – a scout for the Red Sox – to take part in the identification process.

Jim Altobelli, 85, an industrial diamond wheel salesman, told The Sun: “It’s very difficult to go through, you don’t expect something like that to happen. I certainly expected to die before John. He will be sorely missed by everybody."

He then revealed: “John’s surviving daughter Lexi is with his eldest son from another marriage, JJ. They went up for the identification of the bodies."

The husband of Christina Mauser gave an emotional interview on Today just one day after the crash, while friends and family members of Sarah and Peyton Chester also spoke of their heartbreak.

All nine bodies are now with the coroner and will be released back to the families as soon as they are positively identified.

Robert Downey Jr. Put His Role As Iron Man 'On the Line' With Marvel and Fought To Get The Avengers More Money

New Doctor Who season 11 trailer asks 'What's got you so scared?

'Spider-Man 3': When Will Tobey Maguire Make His Rumored Debut in the Marvel Cinematic Universe? It's Complicated