The latest entrant in the race for the crucial state seat of Melton is running late, but he has a good reason.

“Sorry, I had to catch a tiger snake in Manor Lakes this morning – I’m on my way,” says 32-year-old Jarrod Bingham, calling before our meeting. 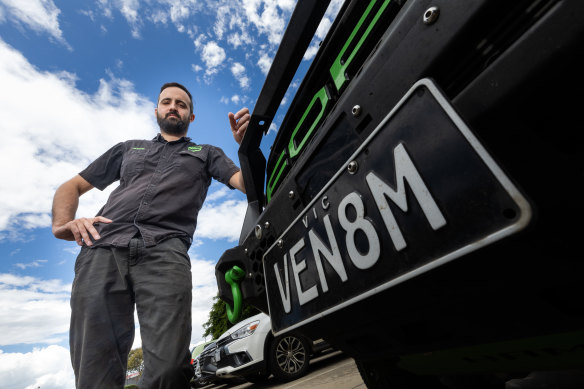 Three weeks from polling day in Melton, another well-known independent has thrown his hat in the ring: snake catcher Jarrod Bingham.Credit:Jason South

Half an hour later, Bingham’s beast of a black Ford Hamer ute swings into the Melton election office car park, sporting the number plate VEN8M. Bingham has turned up with his registration forms to nominate as the second independent candidate for the seat of Melton; he has his $350 nomination fee in cash.

He’s distracted though – he informs me he needs to close the cover on his ute tray because “the snake’s escaped”. I laugh, thinking it’s a joke.

“No, I’m serious. I’m pissed off about it,” says the snake catcher and former Moorabool Shire councillor. “I couldn’t find it anywhere, so it must be under the motor.”

The seat of Melton has been held by Labor since it was created 30 years ago, but Labor fears it will lose there on November 26 after the party’s primary vote declined at the past two elections. The district is an example of many outer-suburban growth areas dealing with inadequate services and infrastructure, which could lead to swings against the government in three weeks.

Labor incumbent MP Steve McGhie has a notional 5 per cent margin under newly redrawn boundaries and is fighting to hold on to the seat against Liberal candidate Graham Watt.

“It’s an independent seat, Labor can’t win,” Bingham says confidently. Bingham ran in the 2018 election in Melton, as did Birchall and four other independent candidates in a crowded field of non-party runners.

Although 40 per cent of Melton voters put their primary vote with an independent, the sheer number of them hindered any one candidate from making it across the line.

Bingham garnered 2842 votes, or 6.8 per cent of the vote, in 2018 and was the third most popular independent after Birchall and Melton councillor Bob Turner.

The snake catcher says he decided to throw his hat in the ring again over the weekend after calling the other independents – besides Birchall – who ran in 2018 and confirming none planned to run again this election. 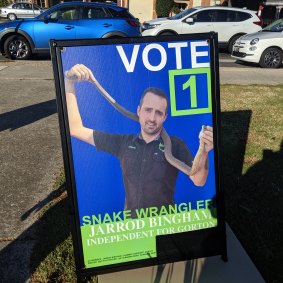 Bingham’s election material in his run for the federal seat of Gorton earlier this year.

“[So] it’s either me or Ian – that’s the battleground,” says Bingham, who also polled 8 per cent in the federal election this year in the newly created seat of Hawke.

That put him ahead of both Clive Palmer’s United Australia Party and One Nation to finish in fourth place.

Bingham’s platform is similar to Birchall’s: focusing on areas of neglect in Melton such as roads and public transport infrastructure, and he believes there should be no new taxes as the cost of living soars.

Like Birchall and Liberal Party candidate Watt, Bingham wants the number of beds at the promised Melton Hospital radically increased to keep up with population growth.

“We need minimum 1000 beds; that’s unrealistic to start off with, but we need to start looking [closer] to that number – 300 beds is not going to cut it,” he says.

Bingham says the main difference between him and Birchall is the snake catcher’s experience in politics as a councillor.

“I’m not afraid to speak my mind, I’m outspoken, I’m not afraid to stir the pot, and that’s what we need as an independent representative for the area. I also get along with politicians from both sides of the spectrum, so I know I have support there. I would have more influence.”

After candidate nominations close at midday on Friday, the ballot paper will be drawn and publicised, with early voting starting on Monday. This week, candidates are busily making preference deals with one another before having their “how-to-vote” cards printed at the weekend.

Bingham hasn’t decided who he will preference first, but is adamant he will place Labor last.

“They haven’t delivered, they’ve had their time and they deserve to be kicked out,” he says.

This story is part of our in-depth local coverage of the key seats of Melton, Hawthorn and Richmond at the November state election.

Kourtney Kardashian and Travis Barker: Fans Are Urging the Pair to Get Married After Seeing Their Latest Social Media Exchange

Inside Phillip Schofield's 60th birthday with his ex wife, daughters and Ant and Dec and their wives at intimate bash