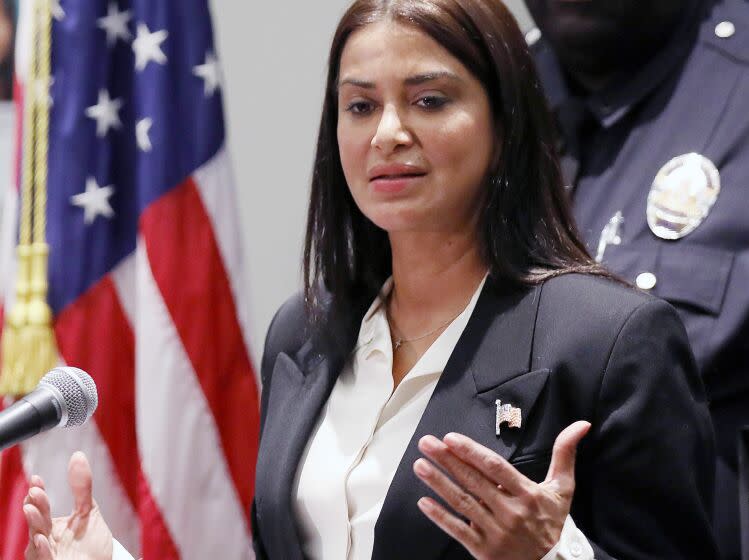 A Los Angeles police captain wants $8 million in compensation after being "gaslighted" by the department over a nude photograph that was doctored to look like her.

Capt. Lillian Carranza said that the photo of a bare-breasted woman whose face was Photoshopped to resemble her was shared within the Los Angeles Police Department and that top brass did nothing to stop its circulation or explain the image was a fake.

“Part of me felt like I was being gaslighted by the department,'' Carranza testified this week. “I had a feeling of helplessness, abandonment and betrayal."

Her attorney, Greg Smith, said in Thursday closing arguments the department did not take immediate and appropriate corrective action after she reported the photo was circulating in November 2018.

“Nobody did a thing," Smith said, adding that the Internal Affairs Division waited a month to interview Carranza after she reported the photo. "This caused her tremendous stress.”

Part of me felt like I was being gaslighted by the department. I had a feeling of helplessness, abandonment and betrayal.Capt. Lillian Carranza

Carranza, a 33-year veteran of the LAPD, said she suffered “severe and pervasive” sexual harassment in the workplace because of the photo. She testified the image was so traumatizing that she was hospitalized on Christmas Eve 2018 with severe high blood pressure and suffering suicidal ideation. She said doctors eventually had to double her blood pressure medication.

Smith asked jurors for $5 million for past economic damages and $3 million for the future suffering of his client. The case went to the jury late Thursday afternoon.

LAPD Chief Michel Moore testified last week in Carranza's lawsuit against the department that the image was intended to "ridicule, embarrass or harass or smear" her, but he opted not to send a departmentwide message about it because he feared “it had the potential of becoming viral.”

Moore acknowledged on the witness stand that he had sent a message to all personnel in connection with a racist Valentine-style meme mocking the 2020 killing of George Floyd that was shared by an LAPD officer in 2021. But he said that was different from the captain's case.

"They are not on the same scale," Moore said, adding he feared the Valentine's post could further public mistrust of the police. "It needed a response to an entire world."

In contrast, Moore said, he did not accede to Carranza's request because to do so could create "a viral interest, human or otherwise," and a "potential for further embarrassment," with others potentially seeking out the photo.

Carranza, who at the time commanded the Commercial Crimes Division and now leads the Gang and Narcotics Division, alleges that LAPD command staff knew the image was being circulated, along with disparaging comments about her, but didn't alert her. Instead, she learned about the photo from a colleague.

Smith said even after Carranza sued the department over the incident, the chief did not publicly tell his officers it was fake or direct them not to share the image. Moore said in Carranza’s case, the department’s effort was focused on finding the “person responsible for sending that out.”

An LAPD adjudication of Carranza's complaint found the photograph had been distributed in at least "four different locations at different times" and "was portrayed to various officers as an image of Carranza." An investigation said it was not possible to identify who initiated the photo-sharing.

She was not subject to interactions in her workplace that were sexually hostile. No one is teasing her.Defense attorney Mark Waterman

Defense attorney Mark Waterman, however, argued that no one in the workplace showed Carranza the photo or made any comments to her about it.

“She was not subject to interactions in her workplace that were sexually hostile,” Waterman said. “No one is teasing her.”

He also questioned how widespread the photo-sharing was, asking: “Where is the evidence that it was sent out as her?"

The trial, which began two weeks ago, shines a light on one of several allegations made by women in the LAPD — which is 26% female — that describe a crude, sexist culture among the ranks that is too often tolerated.

Carranza has been the subject of prior derogatory incidents during her career. In November 2013, a then-detective teaching a training class was captured on audio saying that she was "a very cute little Hispanic lady" and that she had "been swapped around a bunch of times." The department, she said, knew of the recording but never told her about it until the officer who made the recording notified her.

The 2018 photo incident with Carranza came months after the City Council approved a $1.8-million payout to a female officer who accused an internal affairs lieutenant of sexual harassment and ordering surveillance of her when she rejected his advances.

In 2020, the city paid $1.5 million to settle a lawsuit from a police detective who said that she was assaulted, abused and blackmailed by a fellow officer and that department officials ignored her complaints. That officer pleaded no contest to one count of misdemeanor injury of a spouse or girlfriend and was sentenced to three years’ probation.